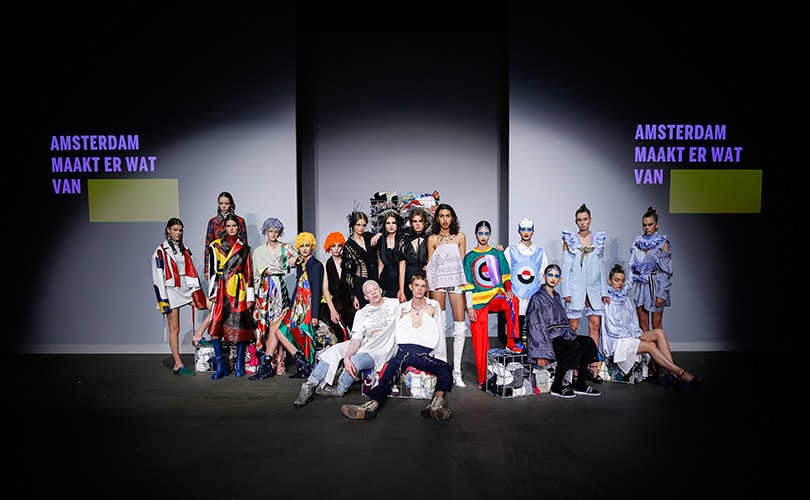 In Pictures: Sustainable Fashion in the spotlight at Amsterdam Fashion Week

MBFWA July 2017 saw a plethora of sustainable designers, showcasing alternative production techniques in order to continue the push towards a more sustainable fashion industry, currently one of the most polluting industries in the world. 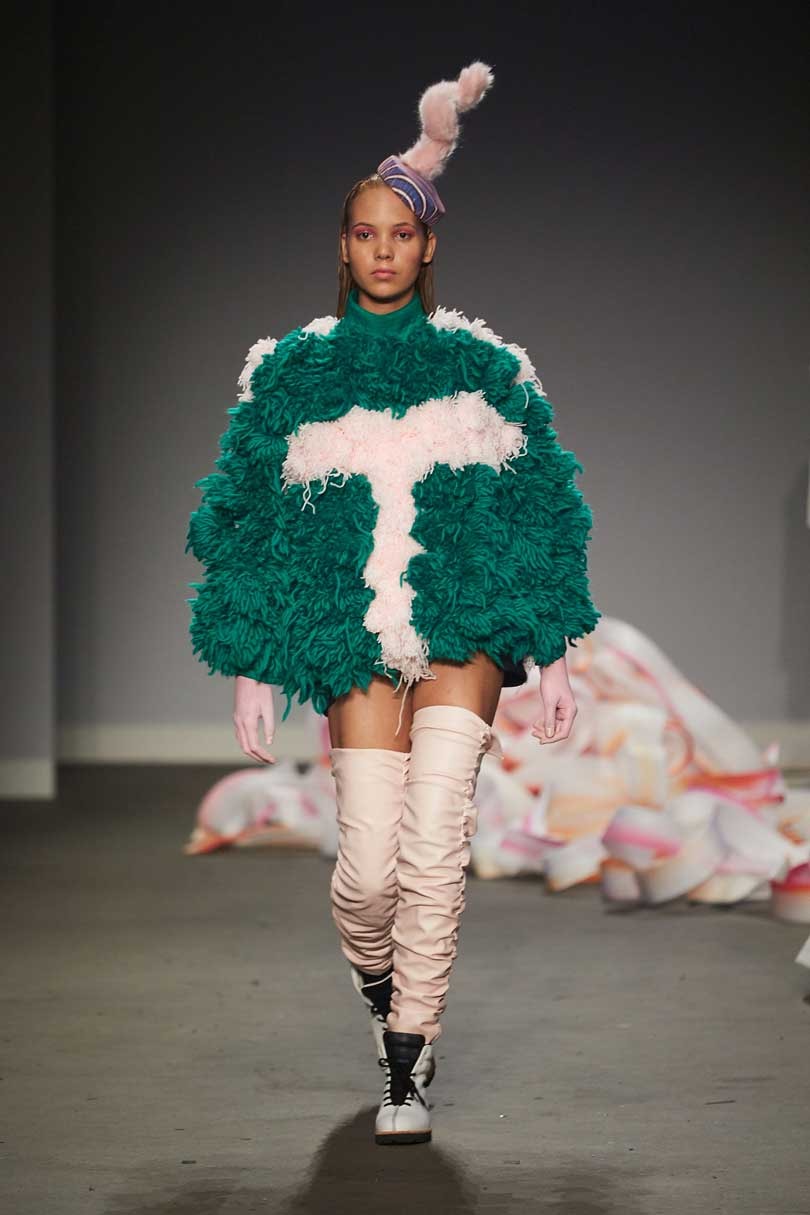 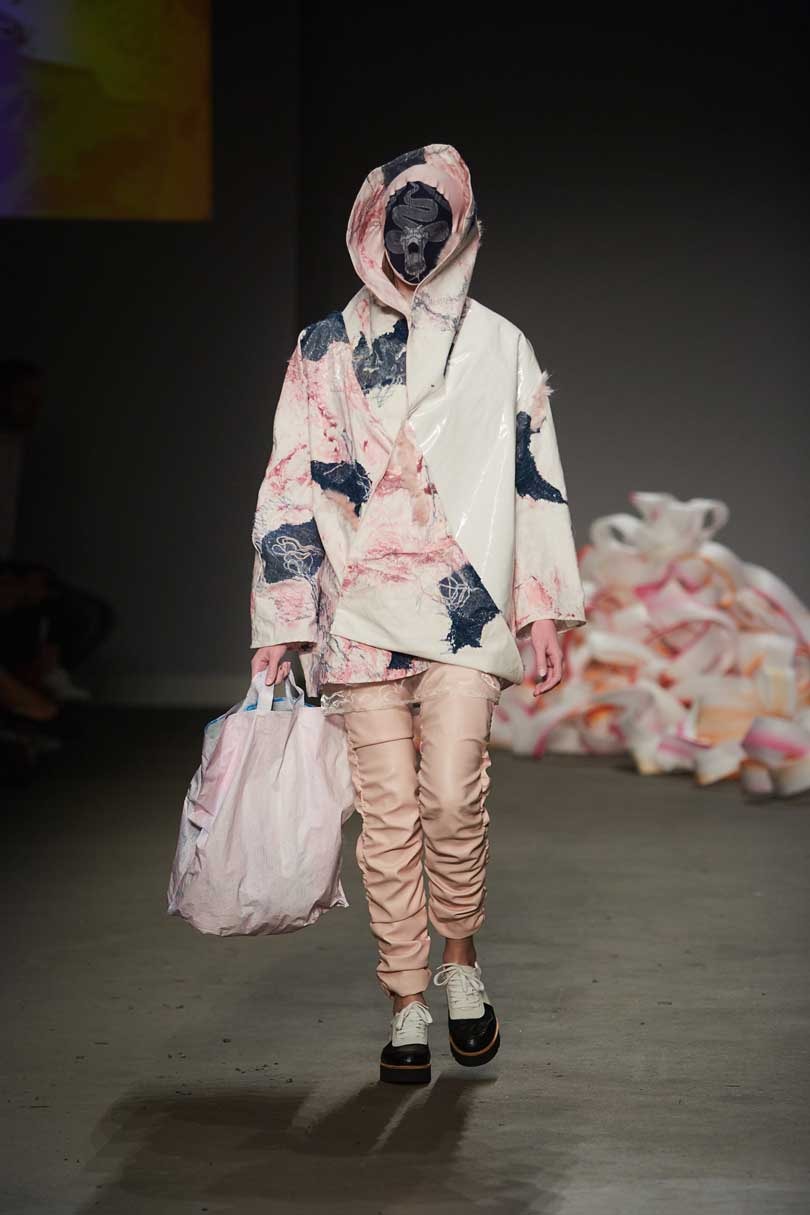 The designers, who describe their designs as “works of art”, are inspired by society and how people are “screaming for attention by the way [they] look, not only on social media but also in real life.” “It’s about showcasing yourself...trying to make an identity for ourselves that is maybe not who we really are” Ajbilou explained in an interview with FashionUnited. “We see it as a sort of game about who is showcasing themselves the best,” Ajbilou continued. The designs are “a reflection on how we live in today’s world”. 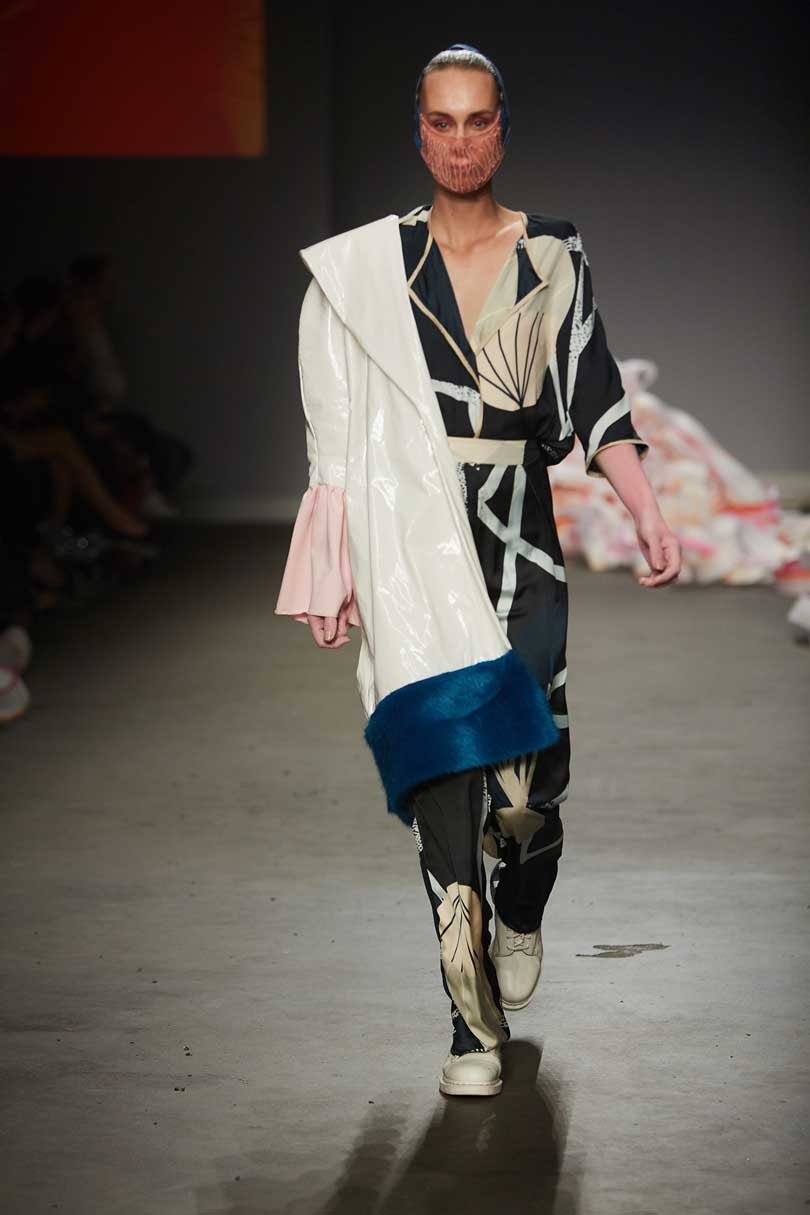 Ajbilou | Rosdorff source their materials from various places - sometimes finding materials in the street, or cut-offs from designers as well as unsold collections which are donated to the duo. Overview-Previous-NEXT is made from materials donated by Nooteboom fabrics, a certified sustainable fabric supplier, as well as Indigo People, a company using traditional techniques to make sustainable fabrics with natural indigo dyes. Describing the search for material as “a hunt”, the two designers chose to solely follow a zero-waste design principle in order to challenge themselves. The fact that most of their materials are donated, proves that a zero-waste approach to design benefits both the brand financially as well as the planet. 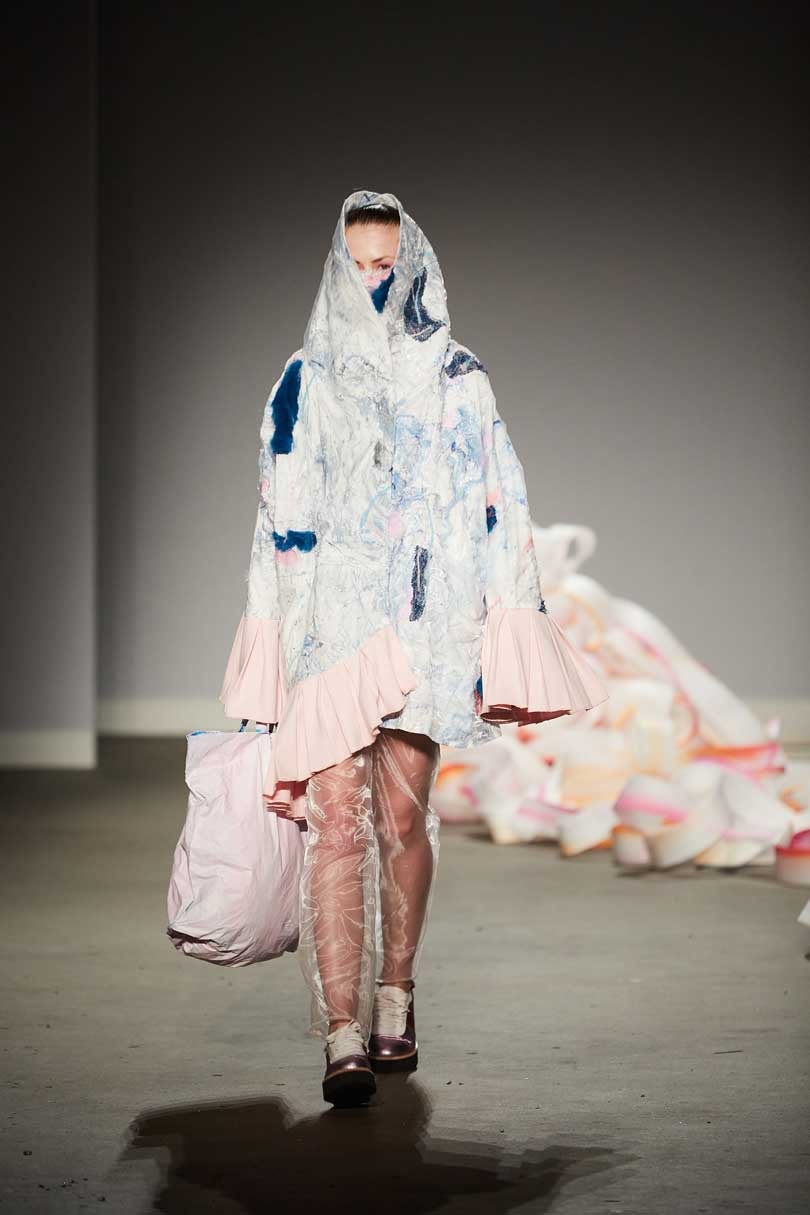 One way the design duo ensure their collection is zero-waste is during production. For example, the pattern jumpsuit from the collection will only be produced upon request and only three of each of the other designs will be available for sale to begin with. Ajbilou added that their customers will not mind the unique designs will not be 100 percent identical to the catwalk pieces, since they will be familiar with the brand and its design ethos before purchasing. 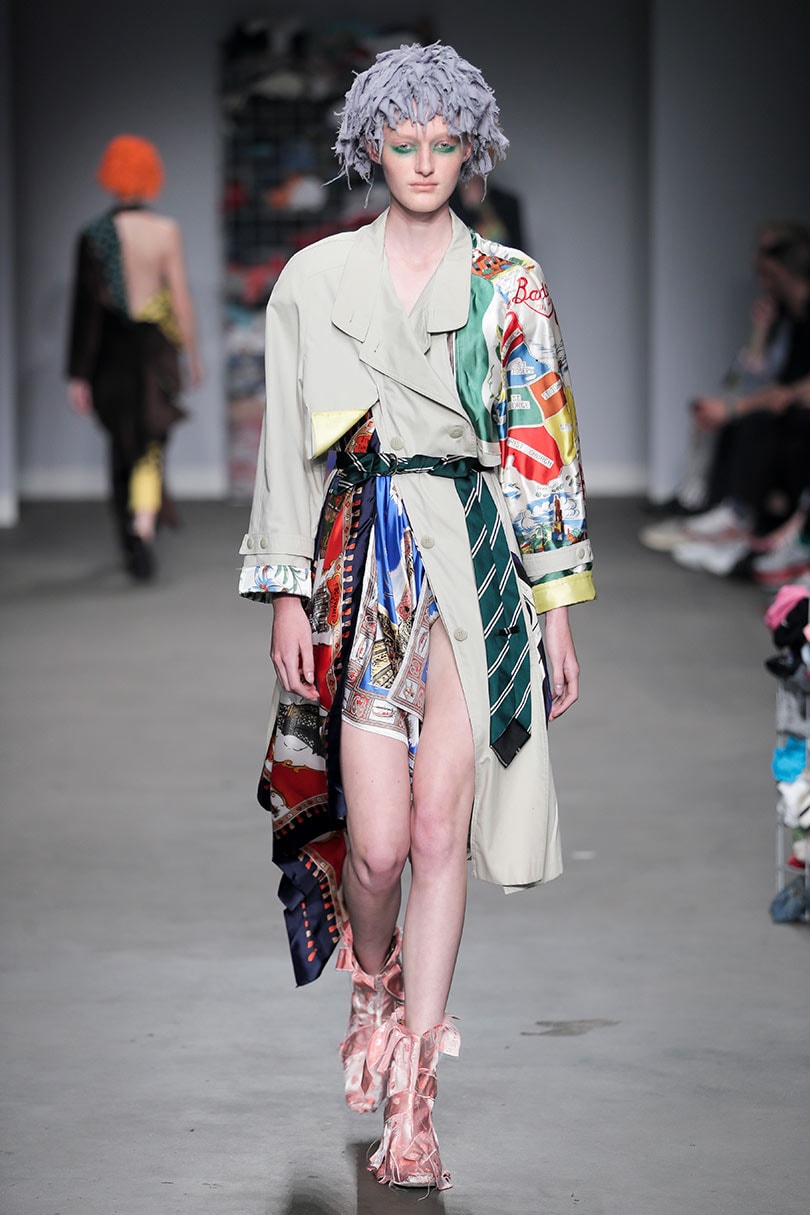 The young designers think that Amsterdam Fashion Week’s focus on sustainability is a positive start, as they believe the public coming to see the show is “the best way to make a bigger impact”. Speaking on the of the future of their label - the designers reveal that they are working with a supplier “[who] is going to make new fabric from the tiny, leftover cutoffs, which will be used in the new collection,” thereby continuing their zero-waste principle. 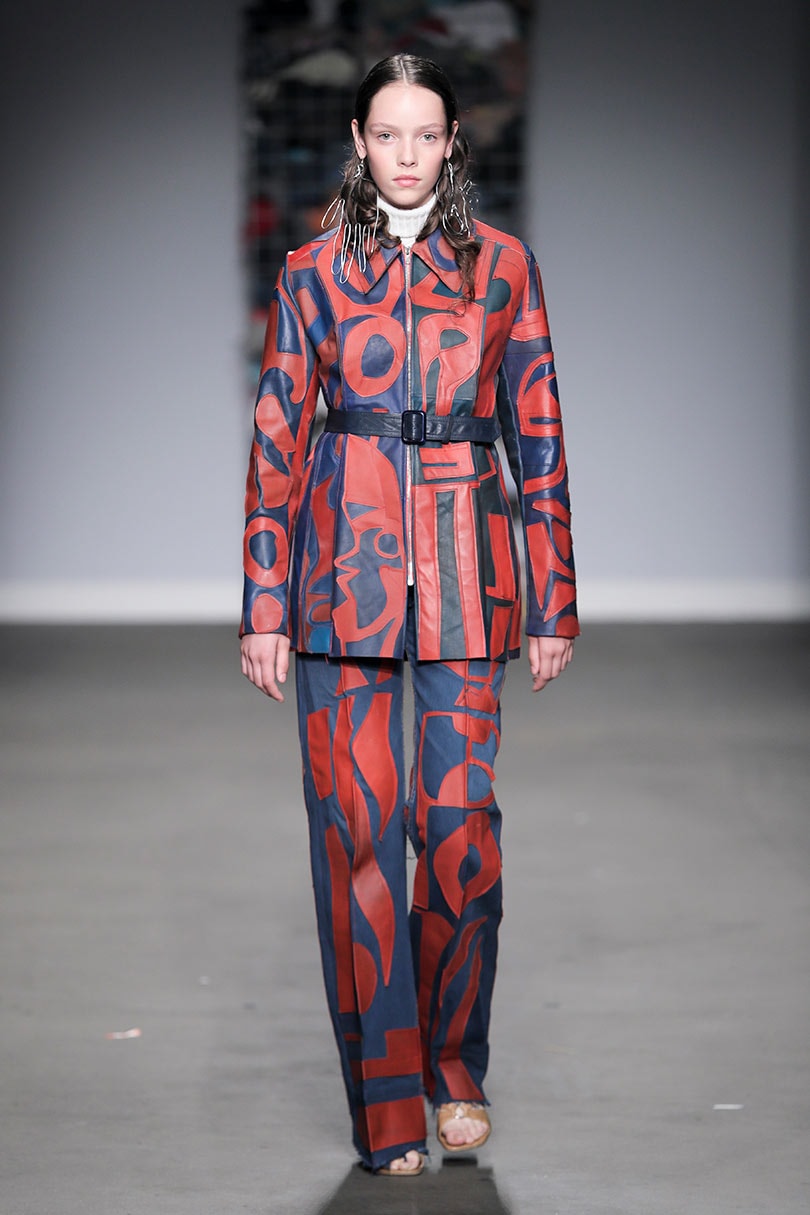 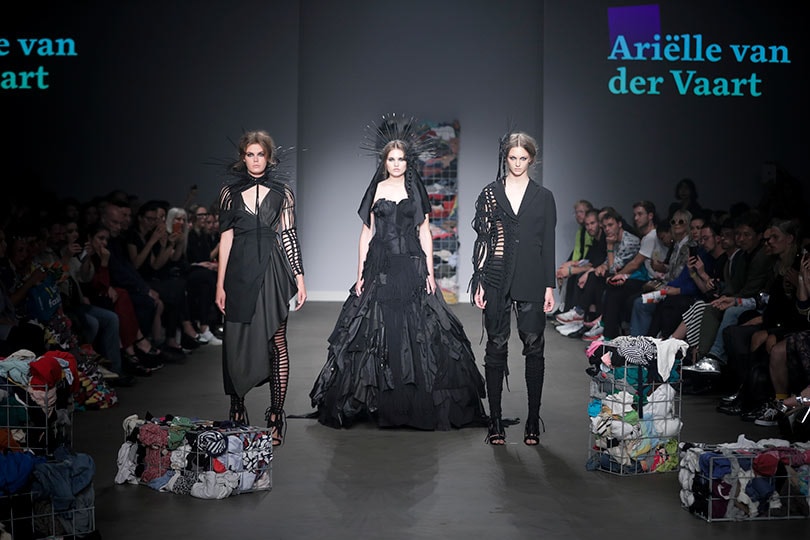 The six graduates, from the Amsterdam Fashion Institute (AMFI) and Gerrit Rietveld Academy were chosen to create three outfits each, using wasted garments collected from the remnants of the King’s Day markets. The design process was coached by three industry specialists; Peter Leterink, a tutor from AMFI, also on the fashion week’s board of directors, Niels Klavers a Dutch designer and tutor at Rietveld and Dutch designer Hans Ubbink. The designs are part of a wider initiative launched by the local city council, which seeks to raise awareness concerning recycling unwanted textiles and apparel. The campaign was backed by a short film, which depicted the lifecycle of a paid of jeans used in one of the designer’s looks, set to officially launch on Tuesday at the X Bank concept store. 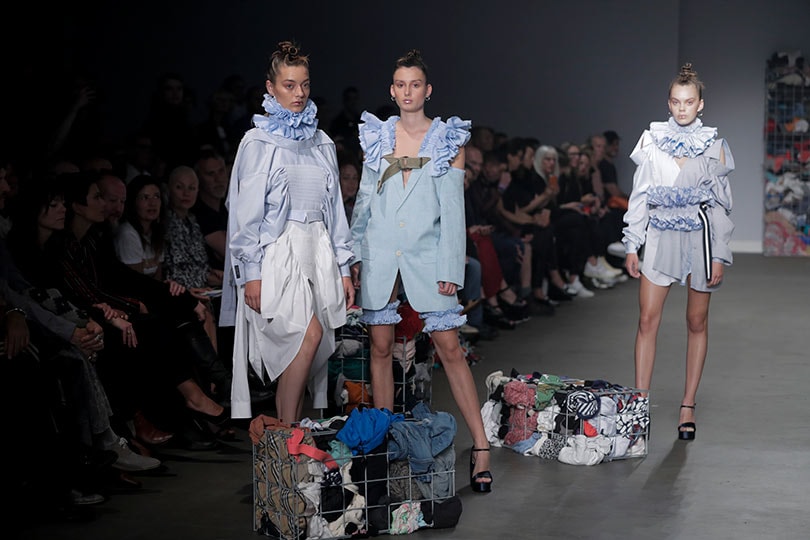 The six individual collections, which consisted of vastly different designs included collaged leather, reworked businessware, the use of labels, the transformation of menswear into womenswear, the restoration of beauty and the reuse of perfectly good garments. 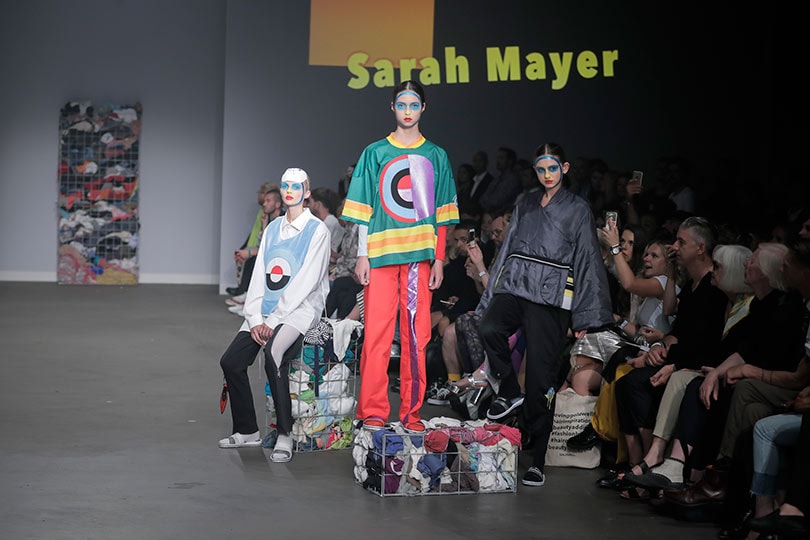 “Trying to get people to think and possibly change their perspective”

One designer, Vita Stasiukynaite took wasted business wear and deconstructed the pieces to create something new by adding in printed silk scarves. Stasiukynaite hoped that by taking business wear design to an extreme, it will make people think differently about what business wear should look like, perhaps thinking “I am going to look even more expensive now that the suit has scarves coming out of it” the designer told FashionUnited. 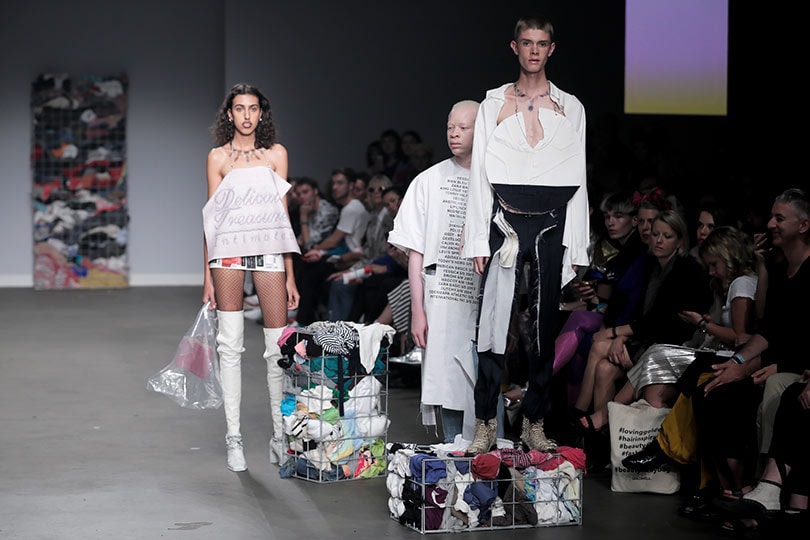 “I actually thought that the campaign was really cool, I was really excited - it’s so much fun” said Stasiukynaite on the initiative.” It’s really interesting, I like working with second hand clothing because somebody has already put so much effort into making it, and it’s all there wasted.” 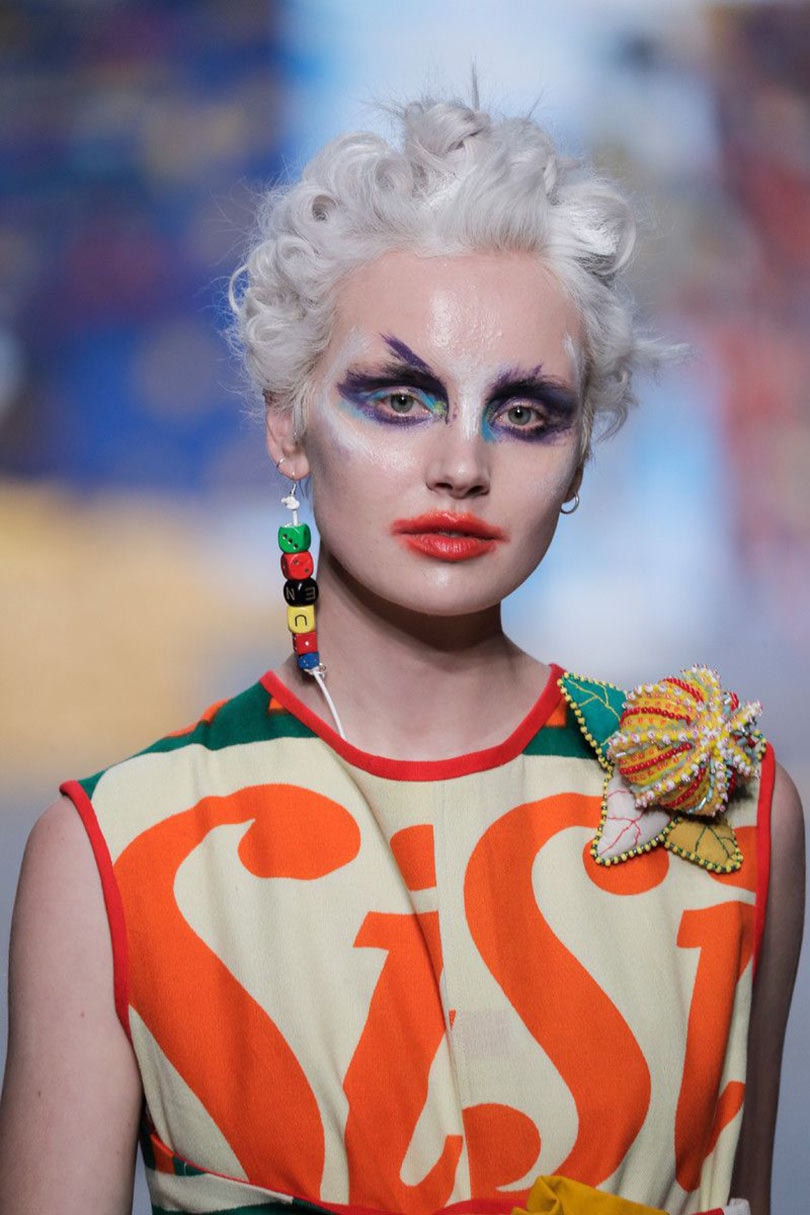 In the future, Stasiukynaite says she would like to find a way to use natural materials in her designs. Along with the other designers, who expressed their enjoyment working on the project, each considering using wasted or old materials within their future collections. 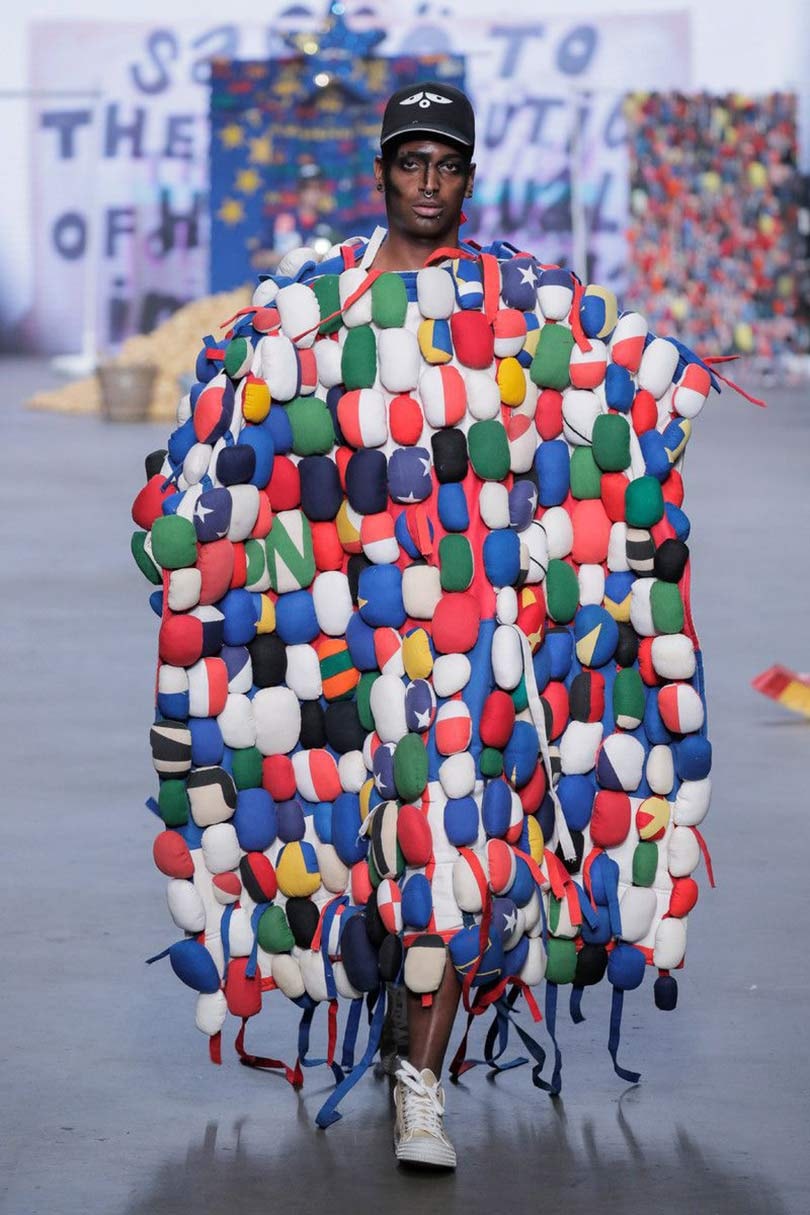 Bas Koster presented his collection ‘My Paper Crown’ last Thursday on the first day of MBFWA. The show celebrated ‘the unmeasurable importance of creativity and craft,’ according to Koster, who outlined his design ethos in his ‘Journal’ handed out to guests of the show. 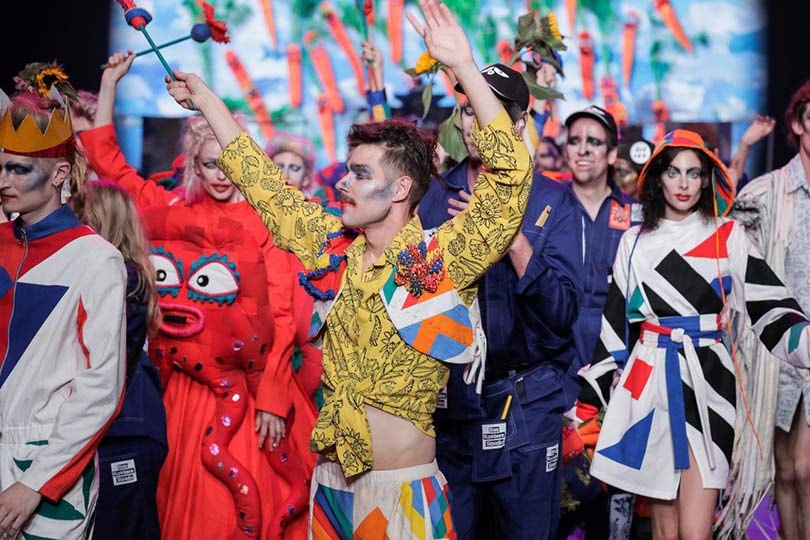 The colourful, eccentric designs were created out of hundreds of recycled, cotton flags, as the designer aimed to do his part when it comes to sustainability in the fashion industry. Kosters showcased his designs within an imaginary village created right on the catwalk, which included ‘villagers’ portrayed by actors from Dead Horse Theatre Company. The village people were celebrating a fictitious ‘carrot day’ with a carnivalesque theme to the show. Koster himself was also part of the village scene, sat peeling potatoes atop a pile of them acting as a ‘village elder’. 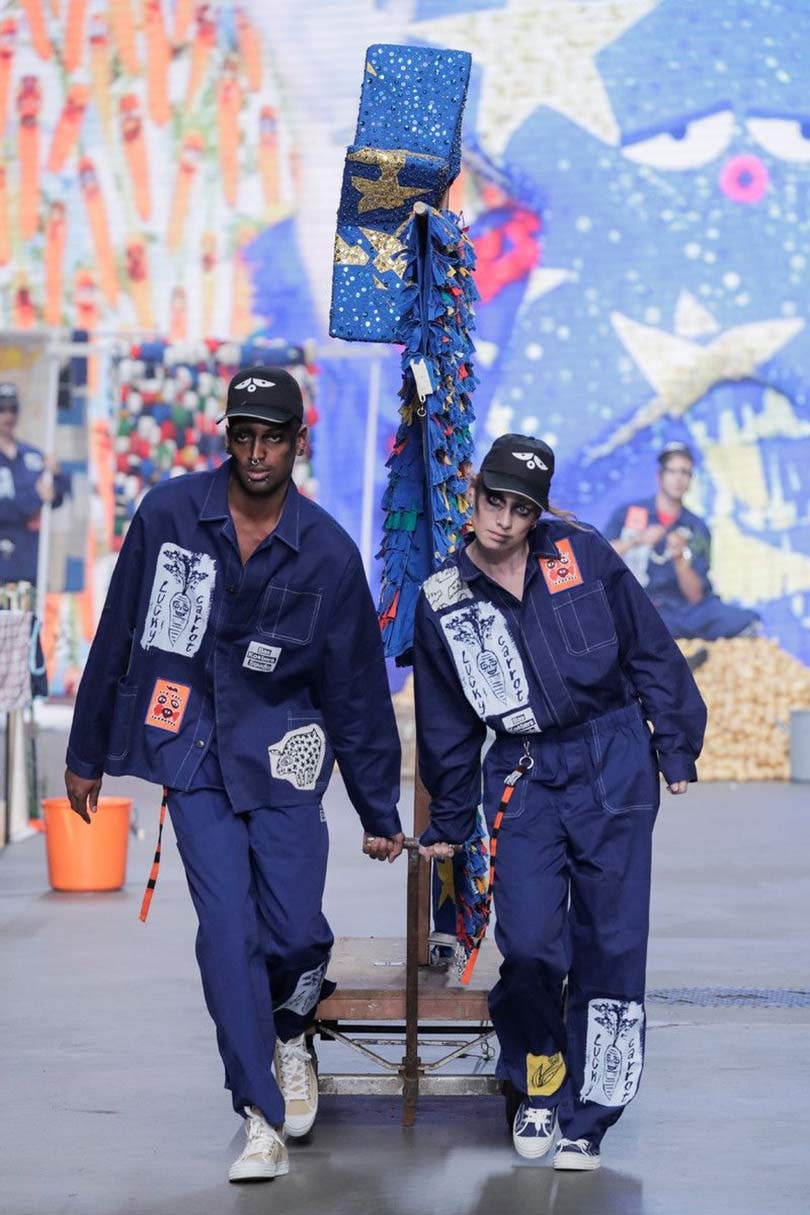 Koster’s colourful ‘My Paper Crown’ followed on from his previous show in 2015, and sees the designer focusing once more on reusing old fabrics. In addition to reusing old flags, the designer collaborated with World Wildlife Fund to help raise awareness for the plight of the tiger. As there are only 3900 tigers left in the wild, the designer created 3900 t shirts featuring his first tiger print in order to help raise funds for WWF to double the population of tigers currently living in the wild. Kosters also showcased seven unique prints made by local artisans in India, which were produced as part of his exchange project with the Textile Factory. 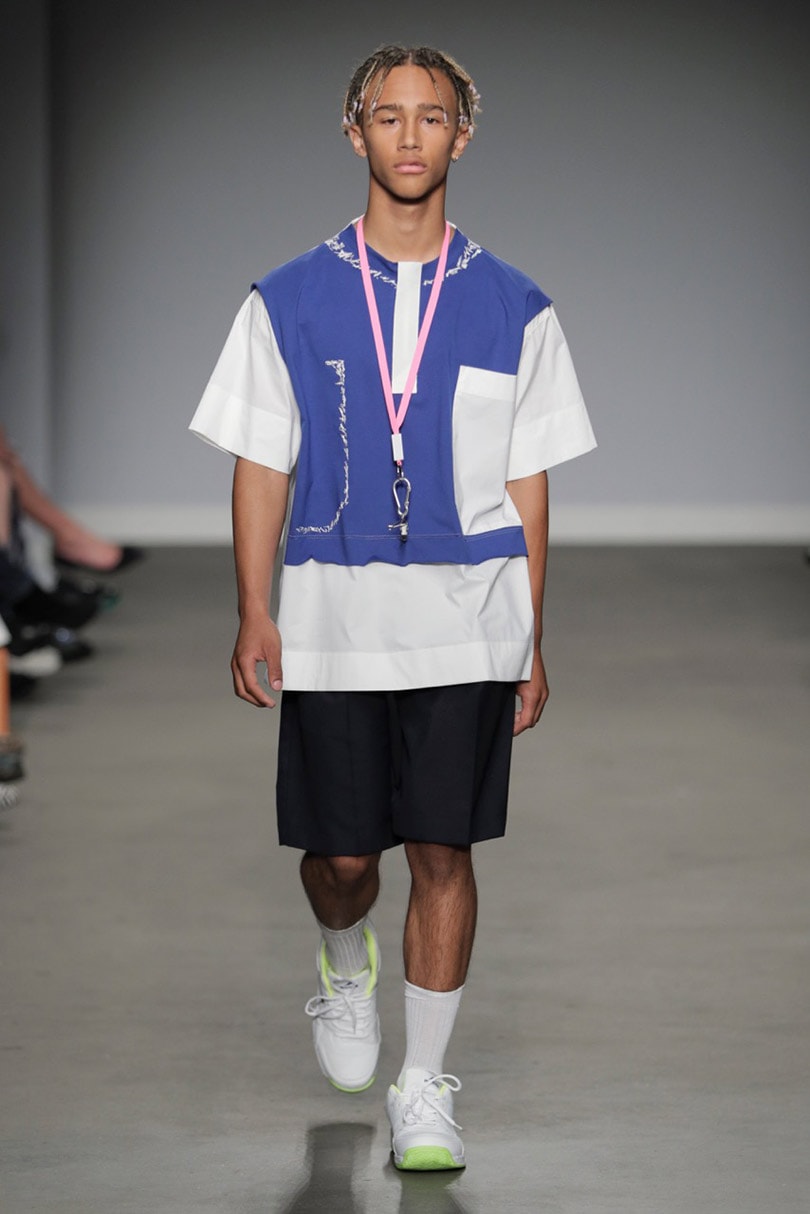 Hacked by Van Slobbe Van Benthum presented their first collection at MBFWA on Thursday, which featured designs for both men and women. Their debut collection marks a change in strategy for Hacked by designers Alexander van Slobbe and Francisco van Benthum, who previously focused their efforts within the back end of the industry. 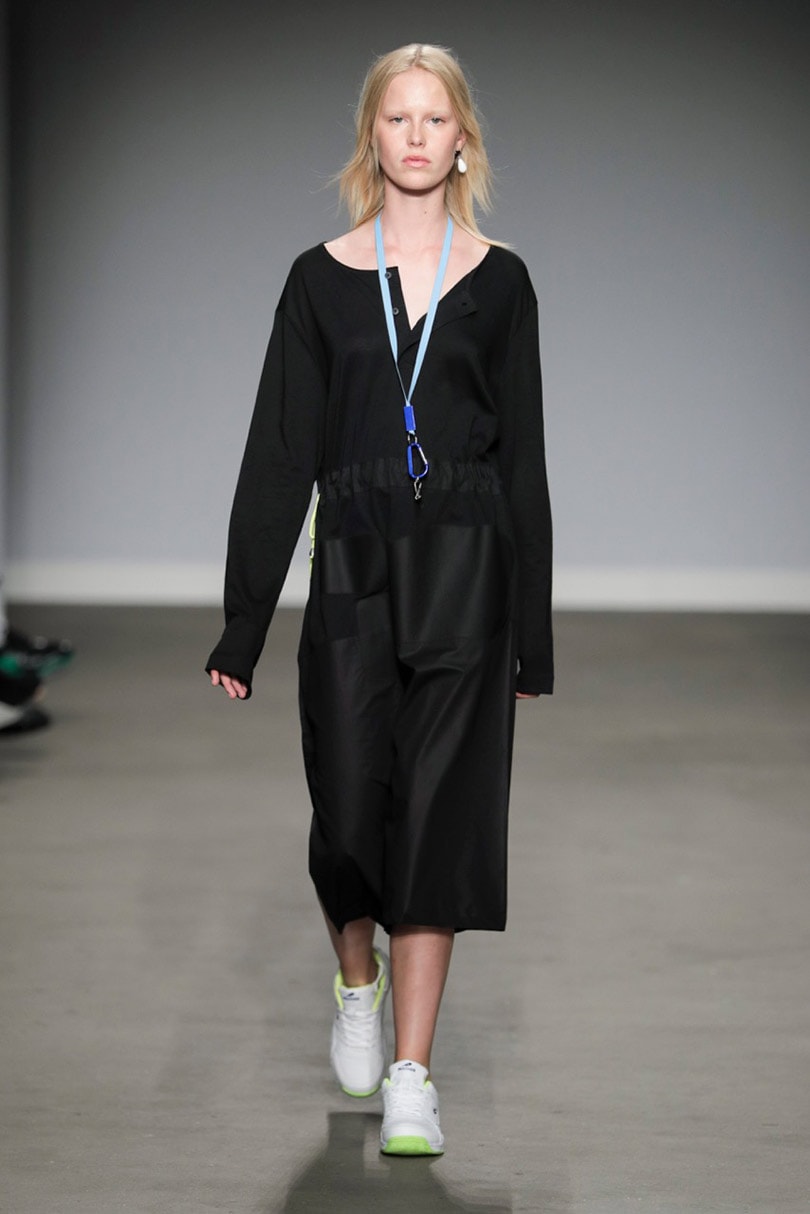 Focusing on making positive change within the industry, the design duo used their show as a platform for educating audiences within and outside of the fashion industry of the benefits of sustainable design, in particular upcycling. “[We are] acknowledging the system is not functioning correctly anymore, and the fact brands can no longer produce for a crumbling market, calls for new approaches and unusual coalitions,” said the design duo in an interview with MBFWA. 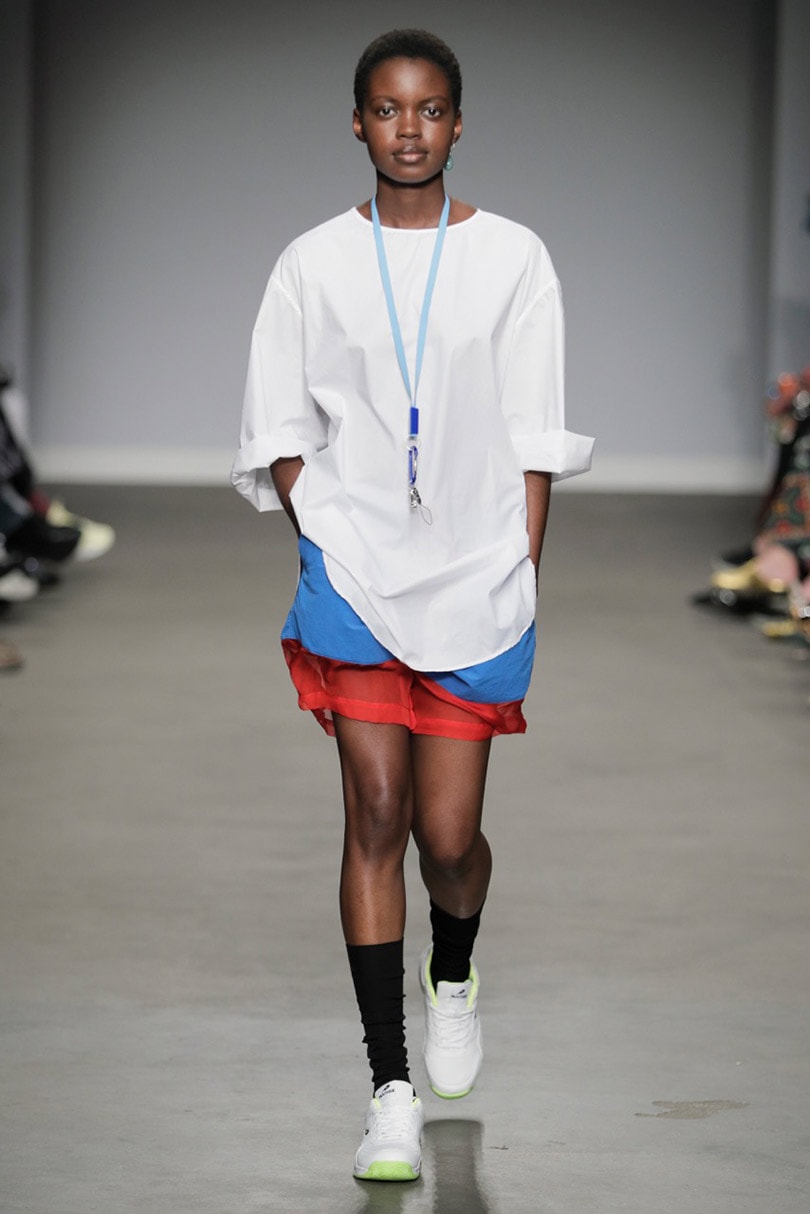 The garments in the debut collection were made out of excess materials and fast fashion overstock, which underlines the duo’s aim to change the “wasteful system in fashion from within in the industry.” The collection includes very wearable designs, such as jackets, trousers and blouses with accessories including fluorescent green soles on white trainers. 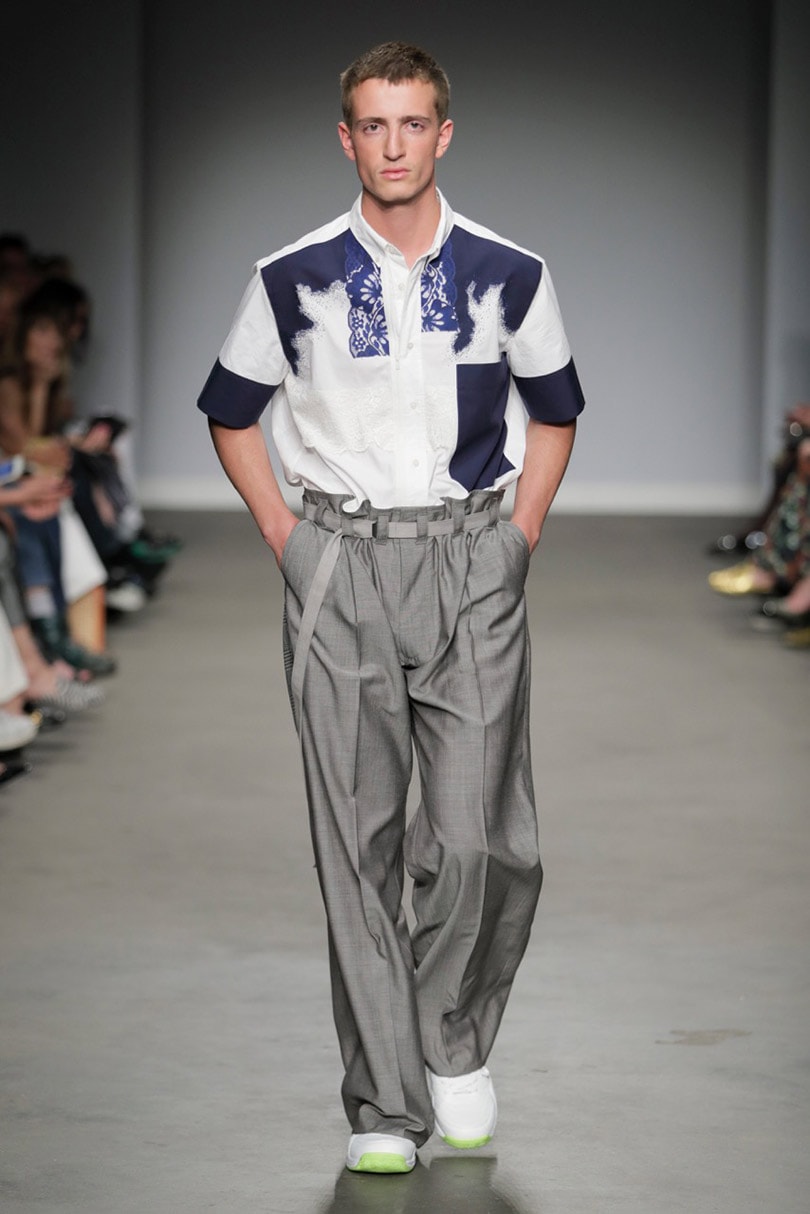