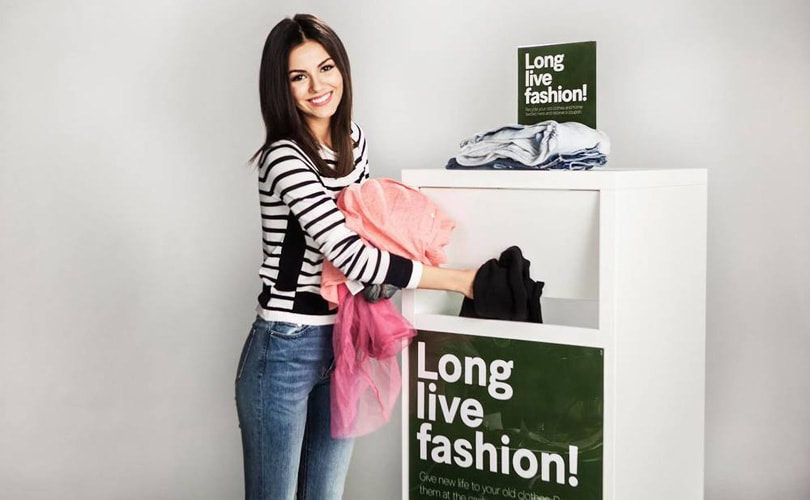 Is H&M really as 'green' as they seem to be?

Swedish fast-fashion giant Hennes & Mauritz has been hard at work establishing its reputation as an environmentally friendly, affordable yet sustainable brand. In its latest marketing campaign, named 'Close the Loop,' H&M encourages consumers to recycle their unwanted garments. The fashion retailer also launched a competition, named the Global Change Award, which will award innovation ideas which protect the earth’s resources within the fashion supply chain.

Both campaigns are a part of the company's larger mission which focuses on creating more sustainable fashion, but therein lies the juxtaposition - how can fast-fashion, a business model created to bombard consumers with new apparel each week ever be sustainable? Is H&M really as green and sustainable as they seem to be, or is it just an effective marketing plan posed to cash in on the big green trend? FashionUnited takes a closer look.

In recent years H&M has also begun promoting what it calls a 'conscious lifestyle' which first began with the opening of the H&M Conscious Foundation in 2007 followed by the launch of its Conscious Collection and Exclusive in 2011, which offers garments produced in a way to cause minimal impact to the planet and its global clothing collecting project in 2013. "Our business idea is to offer fashion and quality at the best price in a sustainable way," said CEO Karl-Johan Persson in the company's latest sustainability report.

"It's about the best value, not the cheapest price. Sustainability is an important part of this. We know that our customers, just as our colleagues, care more and more about it.” As H&M believes that sustainability needs to be integrated into all aspects of its business - from design, to production, to sales, the company established several goals under its seven commitments. Collaborating with consumers as well as external companies to initiate change in fashion consumption is one of H&M’s main approaches to sustainability. 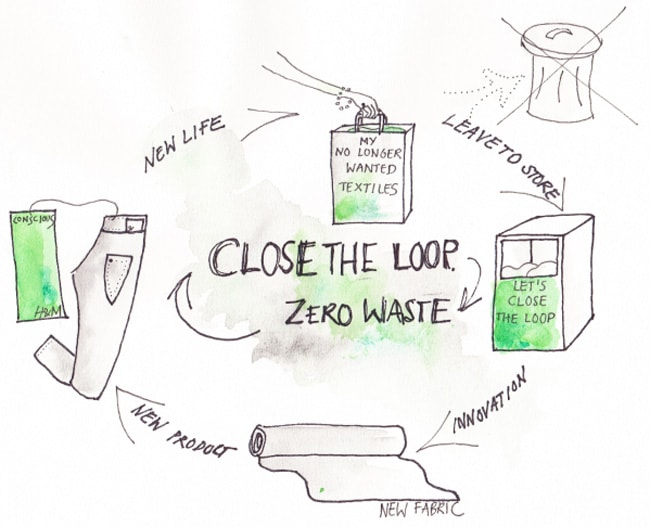 In 2013 H&M launched its global clothing collecting initiative, becoming the first fashion retailer to do so. The recycling programme encouraged customers to donate unwanted clothing in return for discount on new items in store. According to the company, 95 percent of the thousand of tonnes of textiles thrown away each year can be re-worn or recycled. H&M aims to reuse the clothing donated to its stores to close the loop on textiles and ensure it doesn’t go to waste. The company collected 3,047 tons of textiles - equal to 16 million t-shirts in 2013 and in 2014 7,684 tons, which is equal to 40 million t-shirts to be re-used.

According to H&M’s sustainability report, 20 percent of the fibers from the collected apparel are recycled and reused. The company stresses that it is unable to use more recycled fibers without compromising the new garment’s quality. However, this means that H&M only recycled 1,536.8 tons of garments, equal to 8 million t-shirts in 2014 to be used in its new Conscious Collections. Thus 6,147.2 tons of garments, equal to 32 million t-shirts were left behind, begging the question - what happened to the other 80 percent? At the moment H&M remains quite vague on what happens to the remaining 80 percent of fibers as they cannot be reused in new collections. Are they sold off to other companies, are they repurposed as insulation or sent overseas to third world-countries?

Even though H&M maintains that they are unable to create new garments containing more than 20 percent of recycled fibers, outdoor retailer Patagonia initiated its own garment collecting and recycling initiative in 2004. At the time, the retailer collected 45 tons of apparel for recycling which was made into over 34 tons of new clothing. This means that they were able to recycle 76 percent of the fibers collection, 56 percent more than H&M. So is the Swedish fashion retailer really as into recycling old garments as they want to seem?

Rather than stating where these remaining garments go, H&M has extended its global collecting initiative with a new campaign ‘Close the Loop.’ According to the fashion retailer, its garment collecting program is the first step of closing the loop, a programme which would see the fashion taking on a circular lifeline. One of the main cornerstones of H&M’s new campaign is that great fashion should never go to waste. However this initiative fails to mention the effect of transporting, packing, bags and related material waste that are involved in the production and recycling of fashion. Although the company has standard requirements for the recycling of its general waste, they failed to meet their goal of recycling 95 percent of their general waste in 2014. 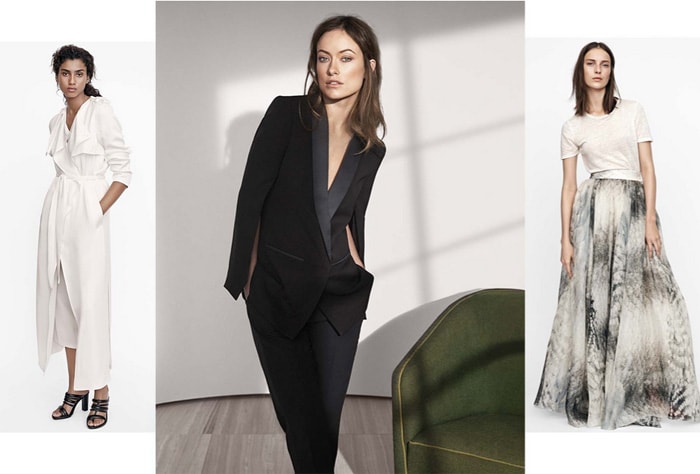 Part of H&M Conscious plan includes seven key commitments the retailer has made to develop a more sustainable fashion future, which ranges from recycling materials, to reducing its carbon footprint, to using more ethical and sustainable fabrics and fibers.

One of the main foundations this plan is its Conscious collection, otherwise known as the green tag line. According to H&M clothing made for this range are made with at least 50 percent sustainable materials, such as organic cotton and recycled polyester. In 2014 the company used recycled polyester yarn equivalent to 39.7 million PET bottles. However, recycled materials only accounts for 0.2 percent of H&M's total material use. In addition H&M currently has no production requirements for the factories it produces its conscious collections at - although they stress that they are trying to be as energy efficient as possible, wherever possible.

H&M's recent Conscious Denim Collection was reportedly made using a less energy intensive method that saves 56 percent of water and 58 percent of energy compared to other denim production processes. Whilst developing the line, H&M referred to criteria set by Spanish denim consultant Jeanologia to ensure the denim washing processes developed met the highest requirements. However, although H&M states that its Conscious Denim contains 20 percent recycled cotton, it does not share what percentage of the collection is made using sustainable materials. H&M also does not say if the production method developed is more green than its own denim production processes or external denim manufacturing.

The Swedish fashion retailer prides itself on its usage of sustainable materials in its collections, but to what extent are they sustainable? Although the company states that 14 percent of its materials is sustainable, how much of its range is really conscious of the environment? H&M first began reporting on its use of sustainable fabrics in 2010, in its annual Sustainability reports. The company claims that it first started using organic cotton in 1993 but by 2010 only 7.5 percent of its total cotton usage was organic. Two years later only 7.8 percent of its total cotton was organic, but 3.6 percent of its cotton was labelled as 'better cotton' as H&M has begun working closely with the Better Cotton Initiative (BCI) in 2012.

H&M fails to meet all its sustainable goals

This year saw H&M pledge to use 100 percent sustainable cotton in all its collections by 2020. A noble goal, however according to FashionUnited's calculations, the fast-fashion chain is unlikely to reach its goal as H&M usage of sustainable cotton only grew 5.4 percent from 2013 to 2014 to account for 21.1 percent of its total cotton usage. If they continue at this growth rate only 71.6 percent of their total cotton usage will be sustainable by 2020 - and 100 percent by 2023. Although H&M was listed as the second largest user of organic cotton by volume in 2014 according to the Textile Exchange 2014 Organic Cotton report, the company is still not close to becoming a part of the 100% Club, an elite group of 16 brands which are credited for only using certified organic cotton, which includes the likes of Patagonia and Vaude. 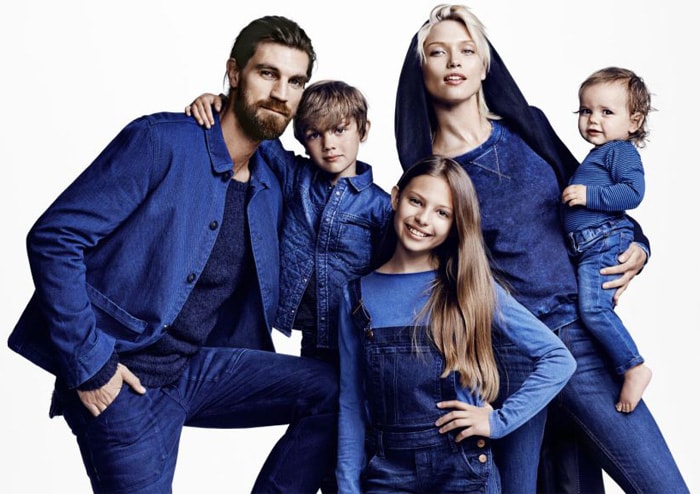 H&M is also excluded from the Textile Exchange list of Top 10 cotton users by Organic share, which names labels such as Kuyichi, Nudie Jean and Eileen Fisher. Although H&M promotes itself as one of the largest users of organic cotton, it is evident that they still have much room to grow. But H&M has also set its sights on improving its usage of other materials such as wool and down. The Swedish company aims to use 100 percent certified wool by 2017 and certified down from this year onwards. In order to establish a global standard to ensure wool sustainability, H&M joined forces with the Textile Exchange, Control Union, Humane Society International (HSI) as well as other brands to develop an animal welfare standard known as 'The Responsible Wool Standard.' (RWS)

At the moment H&M does not enclose what percentage of its wool is currently sustainable, but stated that they are working with others companies to ensure full wool traceability by 2017 as part of the RWS. However a recent undercover expose published by animal rights organization PETA revealed extreme animal abuse occurring at sheep farms in Argentina which are part of the Ovis 21 network - one of the organizations on the steering committee of the RWS. In addition, PETA has also documented systemic cases of animal abuse occurring in wool industries in Australia and the US. 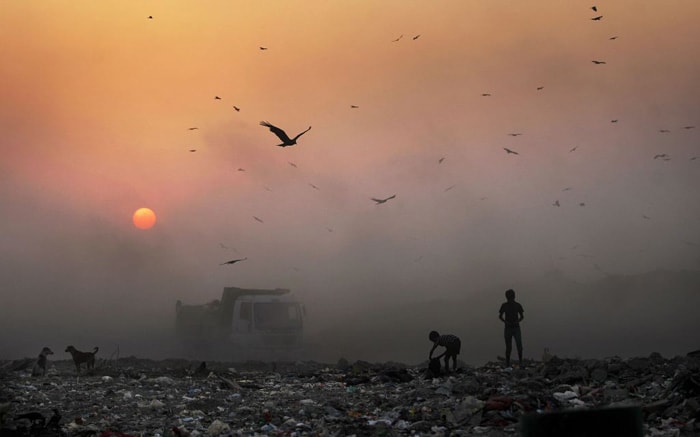 However, H&M stresses that with the RWS they can "influence and improve animal welfare" at a farm level and will continue to source wool from Australia. To express their concern regarding the "unacceptable treatment" of sheep during their shearing process documented by PETA, H&M sent a letter to the Australian government and the Australian Minister of Agriculture - rather than take action on its own against the named wool suppliers. To the company's credit they do acknowledge that there is a limit to how much change a company can achieve on its own and believes collaboration with other companies like HSI is the key to positive change.

After looking more closely at some of H&M’s sustainable approaches and data it seems as if the company is presenting itself as more green and environmentally friendly than it really is. Through clever marketing ploys, such as Close the Loop, H&M is encouraging consumers to continue purchasing apparel - as long as they recycle a part of their old, unwanted wardrobe. On the other hand they also set some ambitious goals related to their overall sustainability and ethical way of working, which puts them ahead of the curve. But setting a goal does not prove real commitment until the results of their actions are made public.

This is the fourth episode of a new series based on FashionUnited's unique business intelligence Top 100 Index. Stay tuned next week's episode on October 16th, which focuses on Marks & Spencer.