Throughout Karl Lagerfeld’s career, which spans over six decades, the late designer was known to bring a distinct creative vision not only to his clothing designs, but also to the runways on which he presented collections.

It was always expected of Lagerfeld, particularly in his later years, to really put on a show. From involved set designs that transformed Paris’ Grand Palais to virtually any location Lagerfeld imagined to dramatic effects conveyed through both models and garments, the designer’s shows were always mesmerizing.

The spectacle of the Karl Lagerfeld runway show will live on in his memory, as Fendi made clear in its tribute to its long-time creative director in its Fall 2019 show at Milan Fashion Week yesterday - and we can expect Chanel will do the same in its upcoming show. For now, let’s take a look back into some of Lagerfeld’s most memorable runways.

If the Grand Palais on the famed Champs des Elysess isn’t Parisian enough, Lagerfeld made sure to elevate its je ne sais quois factor by installing a reproduction of the Eiffel Tower in it. The almost life-size tower sat over a sand runway, reminiscent of the grounds of many parks in Paris, while models strutted the collection under the tower. Following the show, Paris mayor Anne Hidalgo presented Lagerfeld with the Médaille Grand Vermeil de la Ville, the city’s highest honor.

A more toned-down runway in the scheme of Lagerfeld’s inventions, his Spring 2017 set was completely mirrored, allowing his collection to truly speak for itself from every angle. 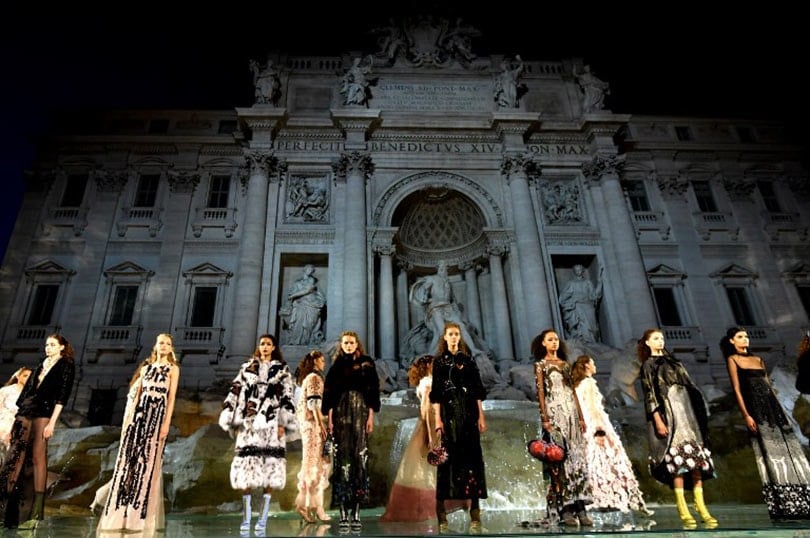 In celebration of Fendi’s 90th anniversary, Lagerfeld opted for the Trevi fountain as the locale for his Fall/Winter 2017 couture collection for the esteemed Italian brand. The glass runway was set atop the water so models seemed to be gliding over the water. 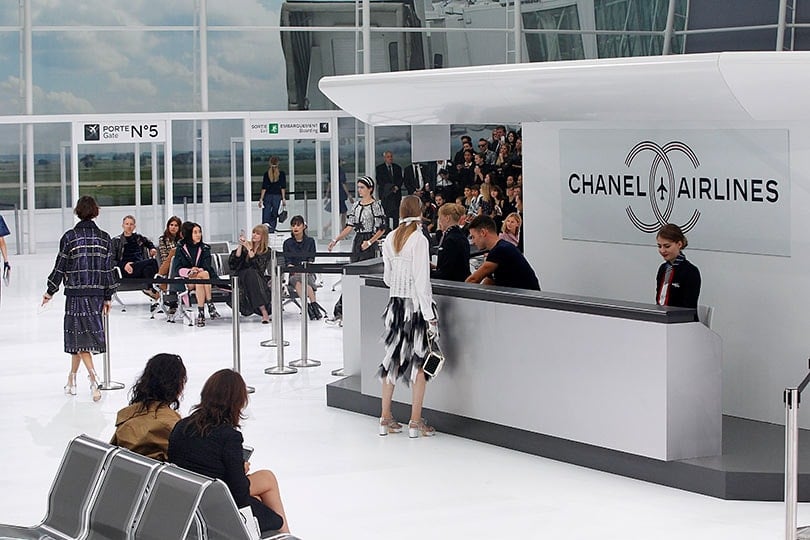 For Spring 2016, Lagerfeld had the Grand Palais transformed into an airport, complete with self check-in, baggage drop and a waiting area.. 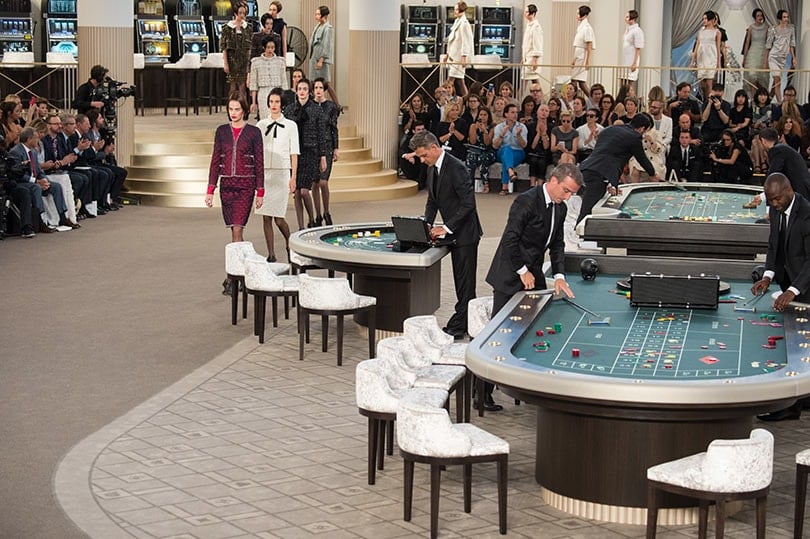 Lagerfeld presented his Fall 2015 collection for Chanel Couture in a casino - one that he had built in the Grand Palais. Some models and muses gambled while others strutted around the casino tables showcasing the new collection. 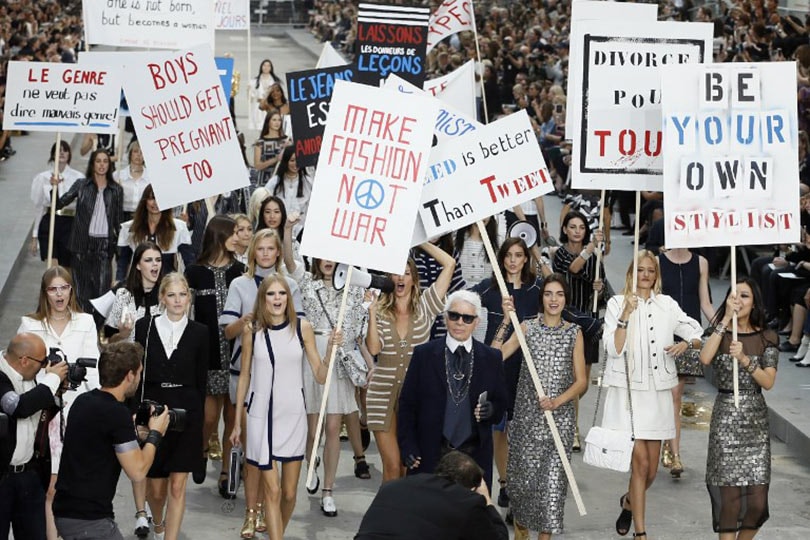 The Spring 2015 ready-to-wear collection was shown on what might the most memorable of all of Lagerfeld’s runway. He staged a protest down a recreated Paris boulevard in the Grand Palais, with models carrying picket signs fighting for women’s rights. 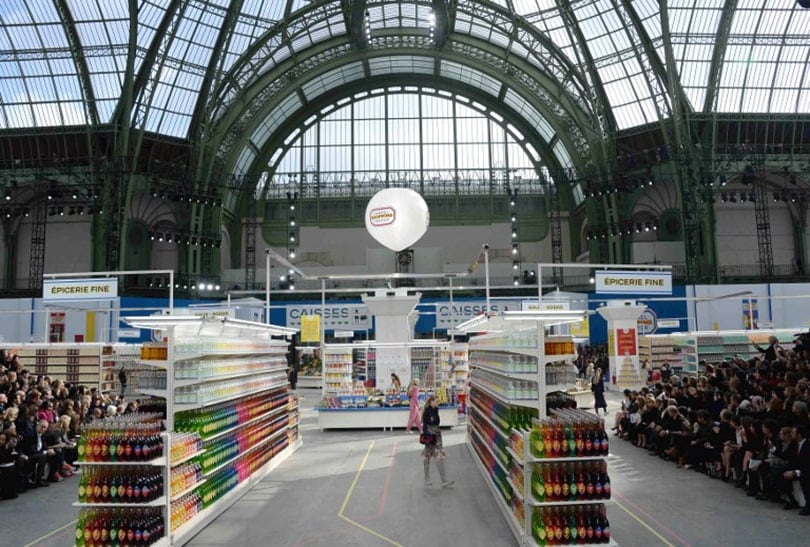 Who can forget the time when Lagerfeld built a supermarket within the Grand Palais? Shelves were stocked with everyday items rebranded in a Chanel version. But instead of shopping, models used the supermarket aisles as their runway. 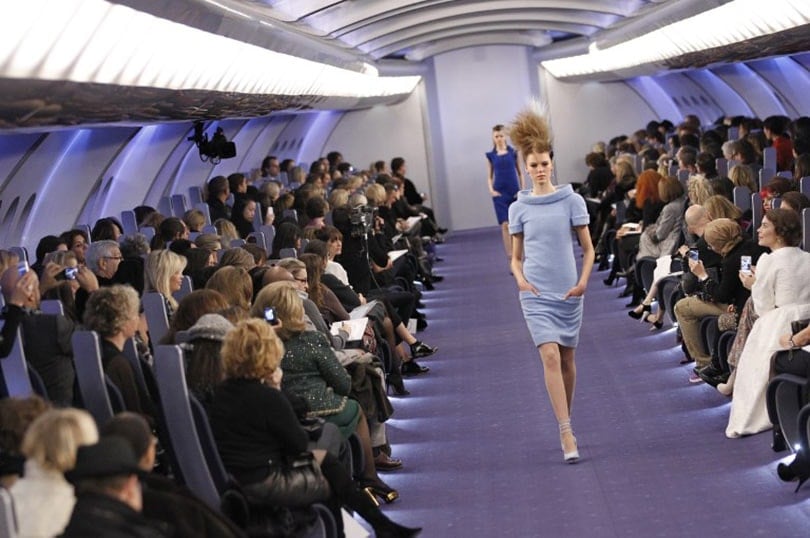 A few years before Lagerfeld designed the airport check-in, he set his couture show within an airplane. Guests sat in the airplane seats, were served drinks from flight attendants and watched models showcase the Spring 2012 couture line down a runway that doubled as the plane’s aisle.