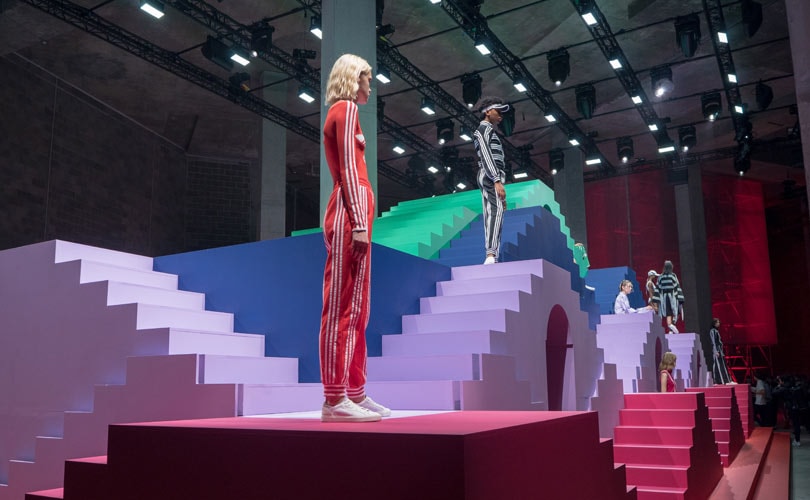 Sportswear giant Adidas Originals brought colour to London Fashion Week to unveil its debut collaboration with New York-based designer, Ji Won Choi, an emerging designer who was previously awarded the ‘Ones to Watch’ award by Fashion Scout, for her work revolving around “investigating human cultures”.

Making its mark on fashion weeks around the globe has become part of strategy around Adidas Originals and for its London Fashion Week presentation it transformed a never before used underground location in Camden, Hawley Wharf. Press were led down temporary stairs into a vast open space where London-based creative events and film production agency Family LTD had created a colourful, immersive bold multi-layered structure, to highlight the sportswear brands collaboration with Choi. 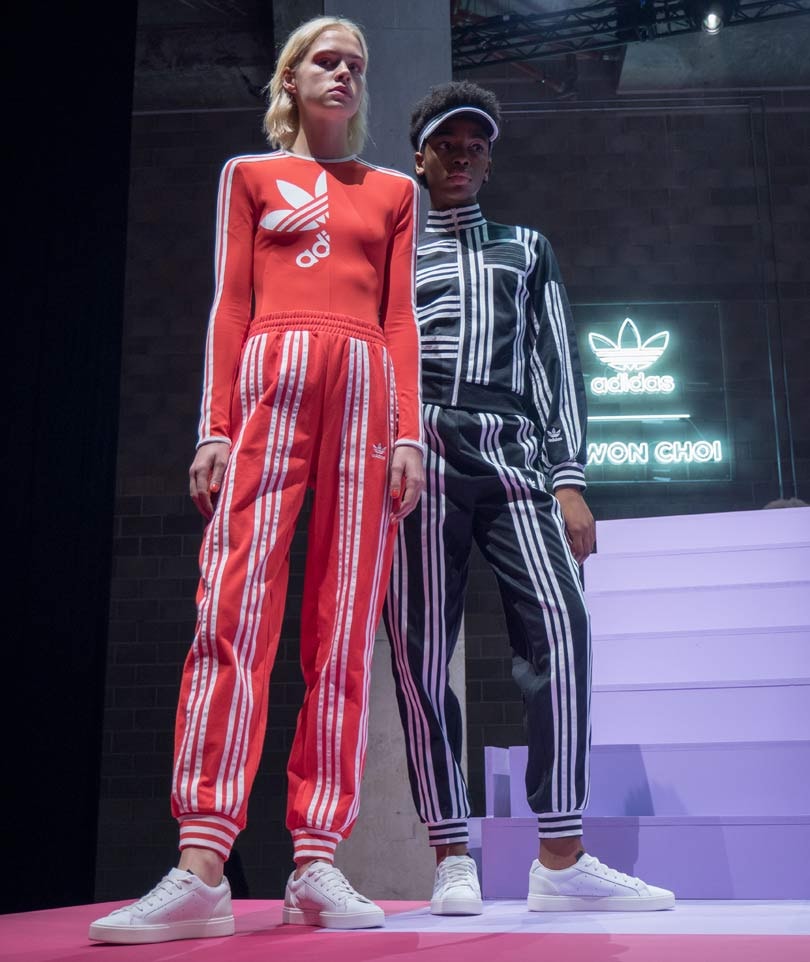 The impressive set design was inspired by the impossible staircase and featured models moving in continuous, choreographed loops throughout the structure, showcasing the sense of movement within the collection. Each layer of the structure referenced a different colour from the collection, which marks the third in a series of collaborations between Adidas Originals and emerging female designers who are reimagining iconic three stripes designs. 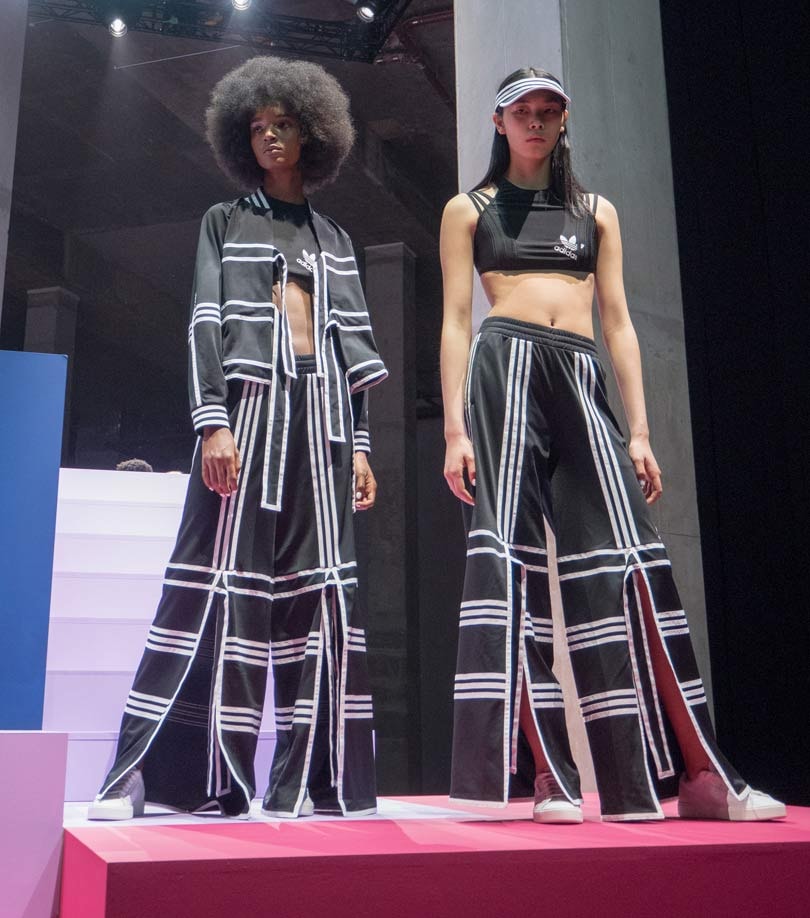 The models commanded attention as they walked up and down the stairs of the structure in tonal hues of lavender, dark blue, red, green, pink and black sporty looks all prominently bearing the iconic three stripe design. 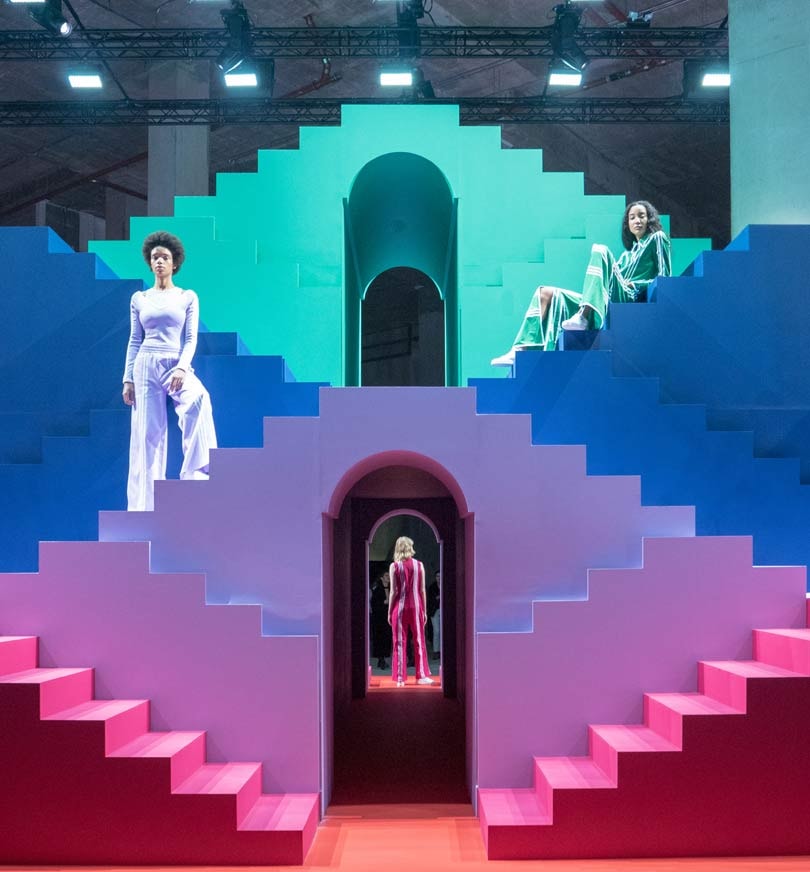 The aim of the Choi’s women’s ready-to-wear capsule collection is to explore the idea of movement while reimagining iconic Adidas Originals three stripes designs through the lens of sport and culture, and the New York-based designer placed the brand’s adicolor tracksuit concept at the heart of the collection, reinterpreting her signature stripe motif developed for her thesis collection while studying at Parsons School of Design. 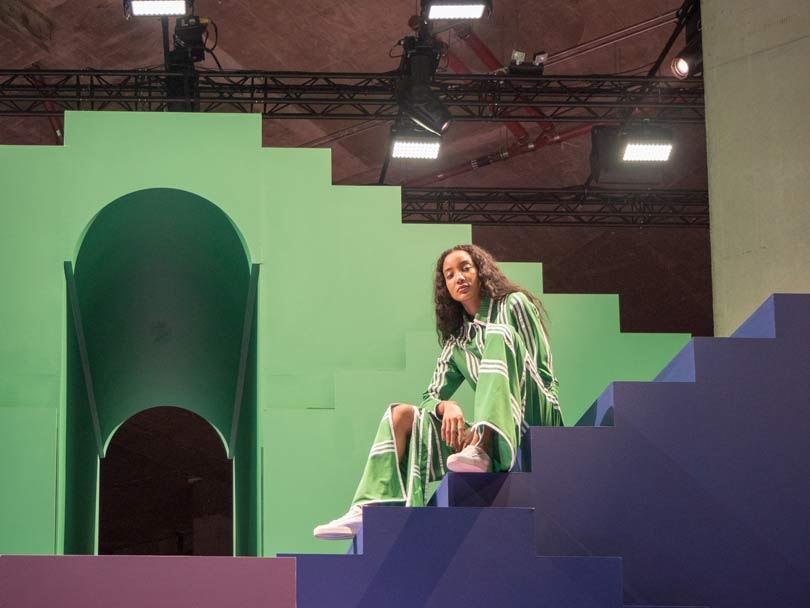 Choi, extended the iconic Originals three stripes off the garments to create a “sense of movement,” she explained at the presentation, while wearing one of the green versions of her tracksuit, as well as adding extra functionality and styling by adding tie closures at the knee of the trousers or on the jacket front. 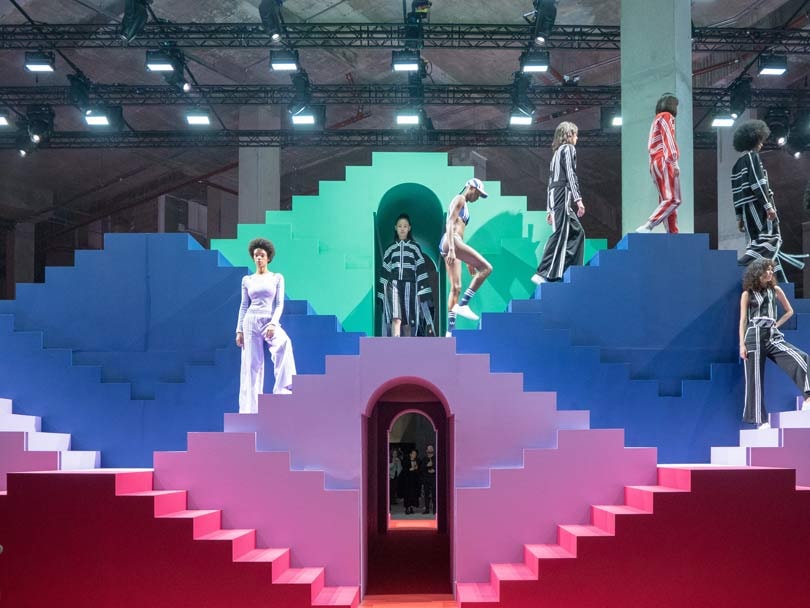 Inspired by her Korean heritage, the collection showcased the Adidas Originals tracksuit silhouette in many different variations including voluminous wide leg pants paired with a sleek, crisp track top or a wide-sleeve take on a track top with elongated straps, to add a “fresh take” on the classic sportswear apparel. 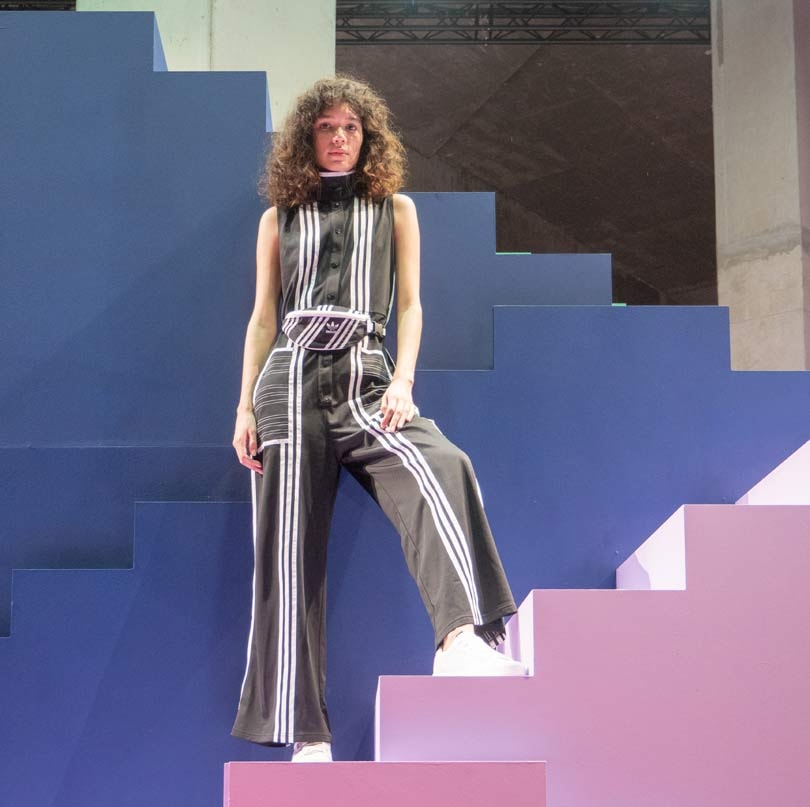 The designer, who was born in Seoul, raised in the US and educated in New York and Paris, was also inspired by her visit to Adidas headquarters in Germany to incorporated more athletic pieces within the collection including swimwear and bodysuits to really highlight the blurring boundaries between sportswear and street fashion. 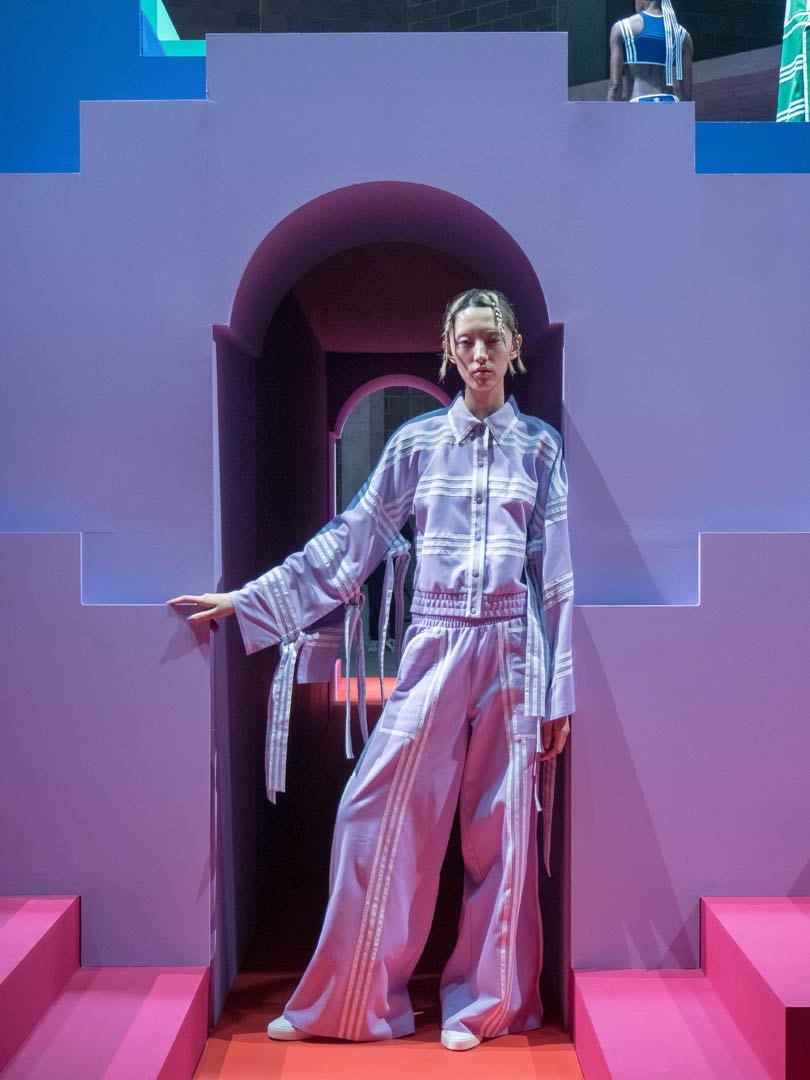 "Ji has such a strong point of view. Her use of colour, contrast and of course her signature design element of conceptual stripes couldn't have been more of a better fit for Originals,” said Alexandra Weiland, director of creative projects of Adidas Originals and Style. “We saw an amazing creative opportunity to turn over our iconic three stripes and adicolor apparel to Ji to see where she would interpret them through her own lens.” 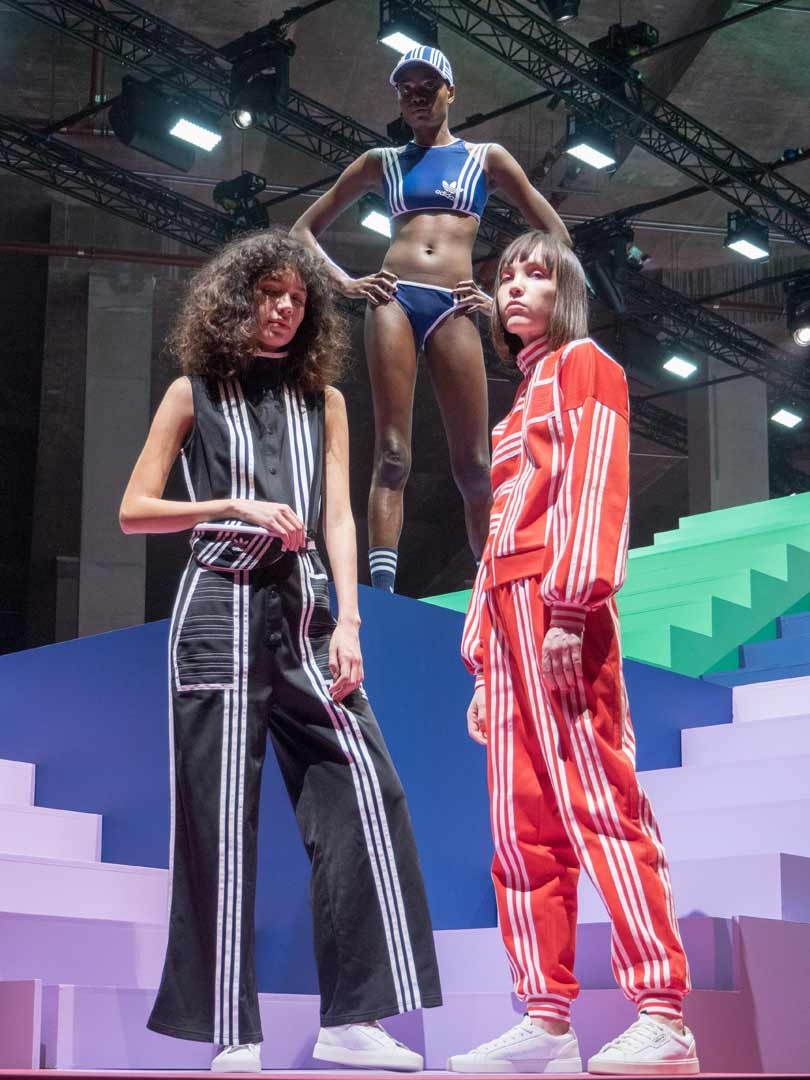 The collection will launch with 17-pieces including tracksuits, a jumpsuit, bodysuits, accessories and swimwear, which have been designed to be versatile for “ease of styling” in what the brand is calling a “saturated colour palette”. This will then be followed up in the spring when the collection is rendered in a black and white colour palette.