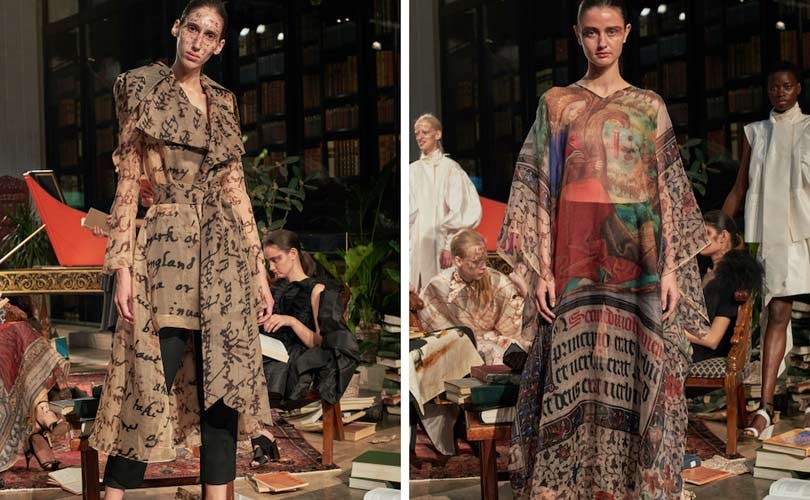 Nabil Nayal’s debut London Fashion Week presentation was one of the hottest tickets this season, as his “design practitioner” approach to fashion, combining research with fashion design, is not only refreshing, but highly creative and in the setting of the British Library, his Elizabethan and contemporary womenswear collection for spring/summer 2019 brought a dash of decadence to fashion week as well as emphasising the importance he places on research in fashion education and practice.

Nayal has been on the fashion radar for a while, winning various accolades including Graduate Fashion Week’s Best Womenswear Award in 2008, and the British Fashion Council MA Scholarship Award, enabling him to study at the Royal College of Art, which led him to pick up the Royal Society of Arts Award. He was also a finalist for Fashion Fringe, and in 2017, he was a finalist for the prestigious LVMH Prize.

But it seems 2018 is Nayal’s time to shine, as the Syrian-born British designer was named as one of the winners of the prestigious British Fashion Council Fashion Trust Grant. The charitable initiative offers not only financial funds, with the eight awarded designers sharing grants totalling 380,000 pounds, but each designer also takes part in a structured mentoring programme, such as legal advice, sustainability and industry best practice and digital training to build up their labels into global brands.

“Honestly, even just the attention you get because of the prestige that Fashion Trust holds is amazing,” explained Nayal when he spoke to FashionUnited during his LFW presentation. “But in terms of some cash flow, some money to help us do these big events.”

Nayal added: “The Fashion Trust is also about the business support, the team are always there to answer questions and offer advice. I’ve called them many times and they’ve always ‘Call us whenever”. I can’t thank them enough, they are just incredible.”

The British Fashion Council also helped Nayal secure the British Library for his presentation space, which marks the first time a designer has ever stage a show in the building, and is fitting as Nayal’s spring/summer 2019 collection is inspired from Queen Elizabeth I’s 1588 Tilbury Speech, which she delivered ahead of the attempted invasion of England by the Spanish Armada, and can be seen printed on the collection and the model’s faces.

“I just finished my Ph.D. 6-months ago and after spending so much time in archives and libraries researching, I felt totally at home being in a library, that I thought it would be incredible to showcase my work in this space,” Nayal said. “I thought that was a crazy idea but after speaking to the British Fashion Council and the British Library they said it was a possibility.” 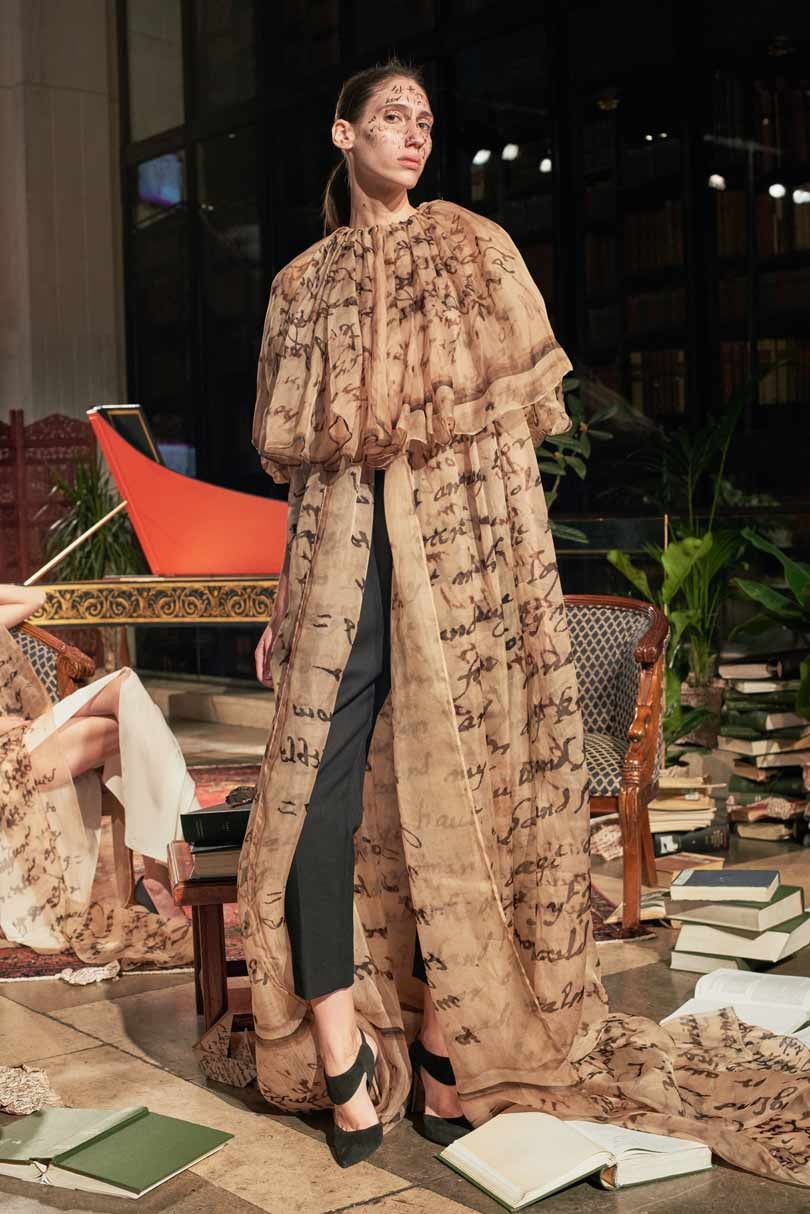 Nayal added: “We’ve been working on this for three months - they allowed me special access to all their archives, so I was able to see all their Elizabethan imagery, the Book of Hours and the Tilbury Speech, delivered by Queen Elizabeth I. Just being able to showcase the wealth of the imageries they have here in this building is a real honour.”

His Ph.D. thesis focusing on Elizabethan and contemporary sportswear really shines through in his spring/summer collection which highlights Elizabethan principles of design, such as the powerful silhouettes, the use of pleats and dramatic construction from the soft silk tulle ruffles to the stiff and starched on the front of the shirtdresses, and the regal drama of the floor-grazing cape-like semi-sheer organza dresses. 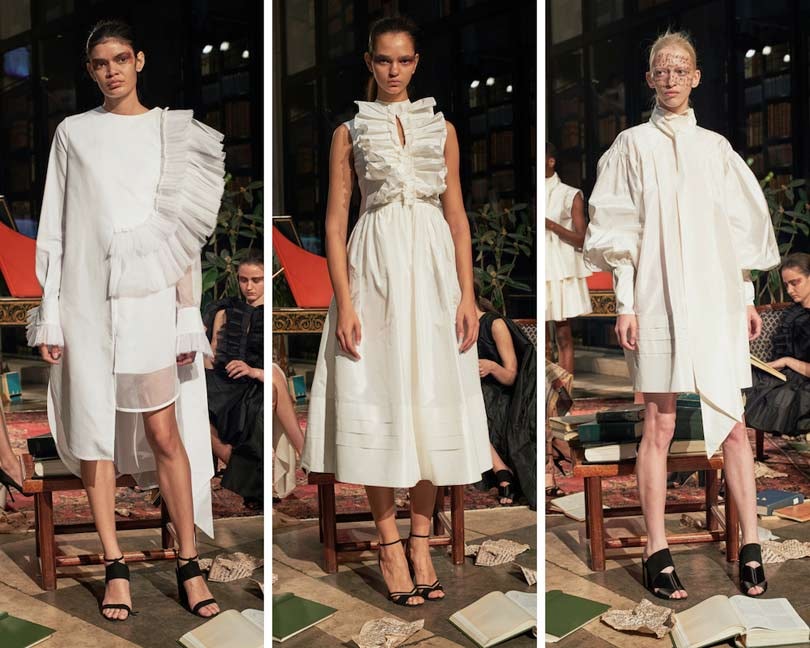 The SS19 collection also see’s Nayal’s love of the classic white shirt further refined. It was Nayal’s craftsmanship of his white shirts that caught the attention of Karl Lagerfeld, during the judging of the LVMH Prize, who loved it so much that he bought it for Amanda Harlech, and the shirt has been since become affectionately named ‘The Karl Shirt’. This season the shirt-form offers what Nayal calls a “puritan backdrop” that “whitewashes” the complex hand-cut embellishments made of bonded poplins and marcella.

As well as showcasing the brand’s signature elaborate couture-style of craftsmanship, the designer’s sister was wearing a 40-metre long tulle cloak that cascaded down the steps of the library, there were also wearable ready-to-wear pieces such as the printed trousers, voluminous smock dresses and tailored shirts, showing how the label is looking to the future by introducing more commercially-viable designs into the mix.

“Some of the pieces are much more time-consuming than others to make, the one that my sister is wearing a 40-metre long cloak took forever to make, it literally filled my living room, there was no floor space anywhere,” he explained. “And the black taffeta dress has a lot of embellishment, so the beading, the gathering and the hole punching was all done by hand and then there are much more straight forward pieces like the white dress, which I call my more everyday pieces.” 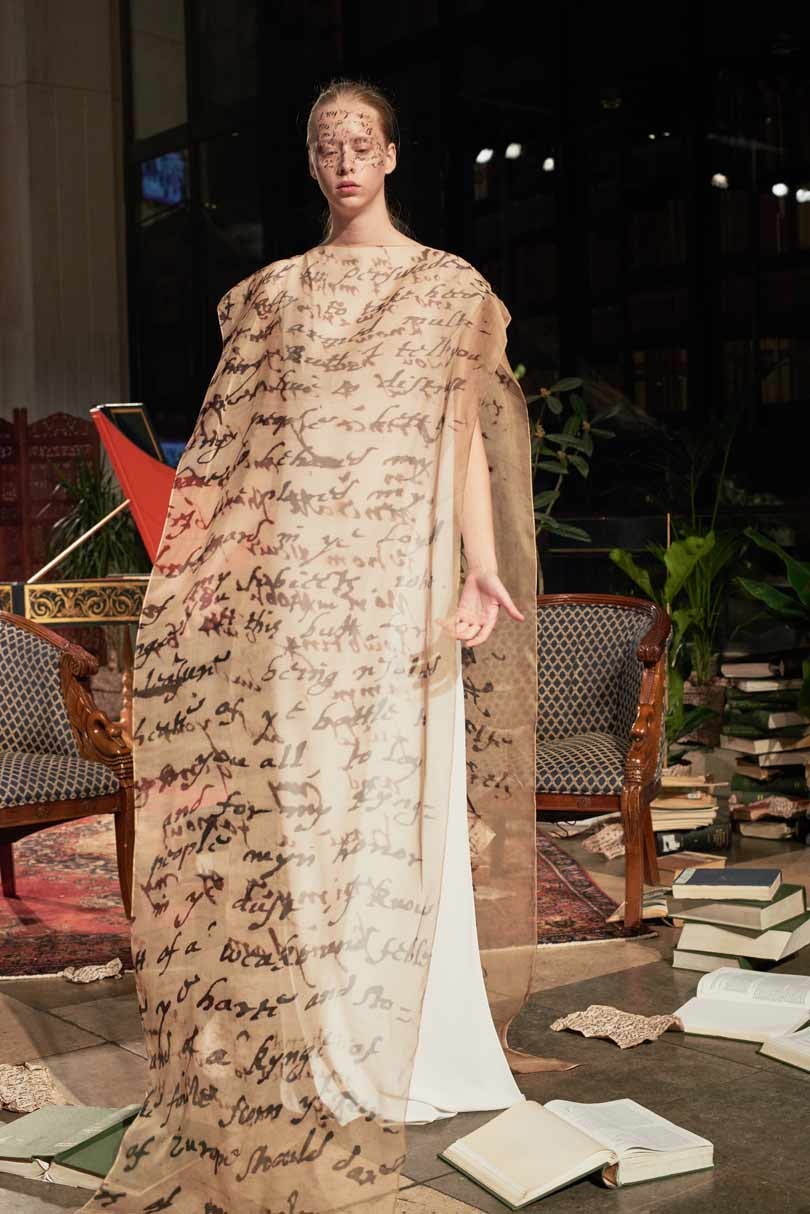 The mainly monochromatic collection, has print heavily weaved into the designs, with the featured print inspired by Queen Elizabeth I’s Tilbury speech showcased alongside digitised images of the Queen, royal insignias, historical cartography and hymn sheets on dramatic flowing cloak-like dresses, belted silk dresses with kimono sleeves and tailored trousers, which feature accents of pale gold, greens and rich blood red, shining through on the black and white looks.

Nayal calls himself a “design practitioner,” adding that while he is pushing forward to grow his label that he will always straddle the line between research and academia and also practice, and added that he believes these principles will push the label forward as well as inspire his future collections.

“I’ve always been a designer who likes to be in the library researching and I’m very much into the Elizabethan and Renaissance era, so it was a natural kind of progression to take my research into a Ph.D. context, so it doesn’t feel like I’m doing anything different now, I’m still doing my research in a way at the library, it will continue being this research-practice mix.

Nayal has a way of recontextualising the spirit of the past by offering the modern-day woman a regal touch with masses of tulle, ruffles and his unique approach to tailoring - and the inspiration of Queen Elizabeth I and the Elizabethan era adds strength and confidence to his dramatic and beautiful designs that makes him stand out from other emerging designers.

“It’s going to be a big shift, from full-on research for my Ph.D. to dedicating all my time to the collections - but we’ve some ambitious plans and I’m excited,” expressed Nayal. 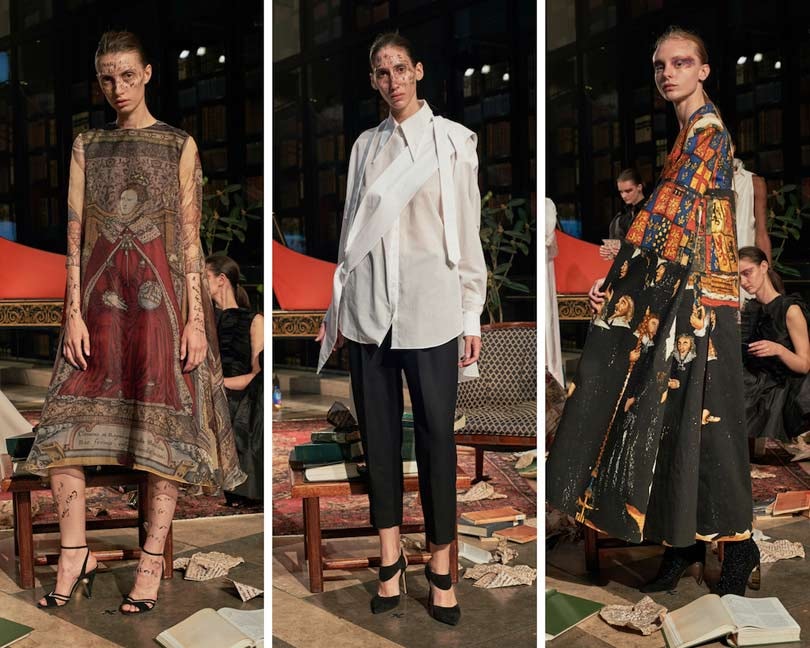