The first major fashion event of 2020 took place in London from January 4-6, London Fashion Week Men’s, and while some were concerned over the lack of big-name designers opting for Paris and Milan and the sparse schedule, the creative force of the London menswear scene prevailed and FashionUnited has selected its top five collections.

This season marked the 15th edition of London Fashion Week Men’s, however, gone are the days when Burberry, JW Anderson, and Vivienne Westwood were part of the schedule, even Craig Green was absent, and A-Cold-Wall, who may have hosted a “creative experience” is off to Milan Fashion Week Men’s as part of a British Fashion Council collaboration to highlight British talent to the international fashion scene.

That doesn’t mean that London doesn’t have great menswear talent, autumn/winter 2020 saw Grace Wales Bonner, Charles Jeffrey Loverboy, Martine Rose and Edward Crutchley continuing to evolve, while emerging designers like Ahluwalia, Bianca Saunder, and Pacifism, which made its debut at London Fashion Week Men’s stepped up their game to show that there is still talent on the rise. 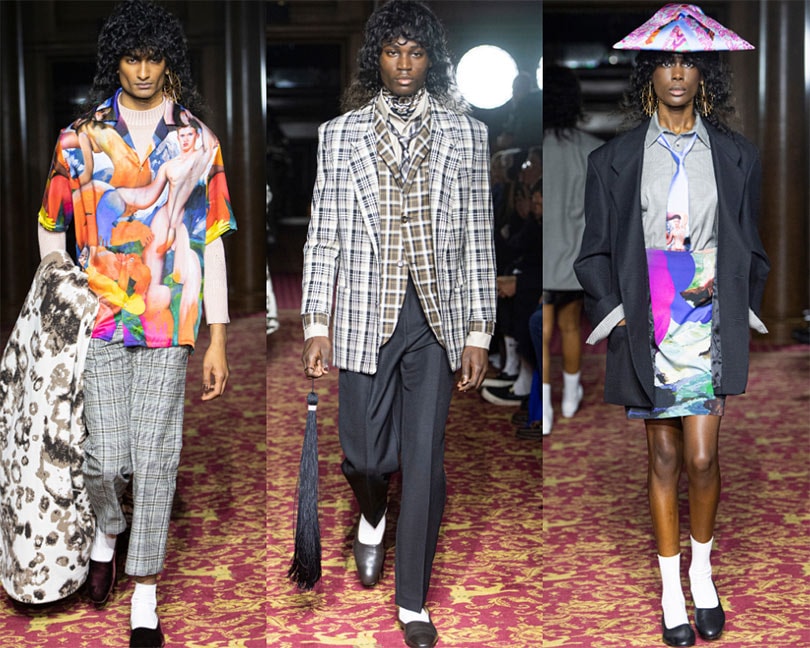 British designer Edward Crutchley, winner of the 2019 International Woolmark Prize and shortlisted for BFC/GQ Designer Menswear Fund, continued to impress editors and buyers with his co-ed autumn/winter 2020 collection that was mixed with cultural references from around the globe.

There was the charm of mid-18th century English chintz, graphic cable knits plaited in Scotland, shoulder detailing that borrow their peak from traditional Filipiniana dresses, ornamental clouds remixed from antique Javanese batik, and even the pageantry of Nudie Cohnʼs campy country and western suits, the designer explained that it was a “creative collusion in a confounding age” in his show notes. 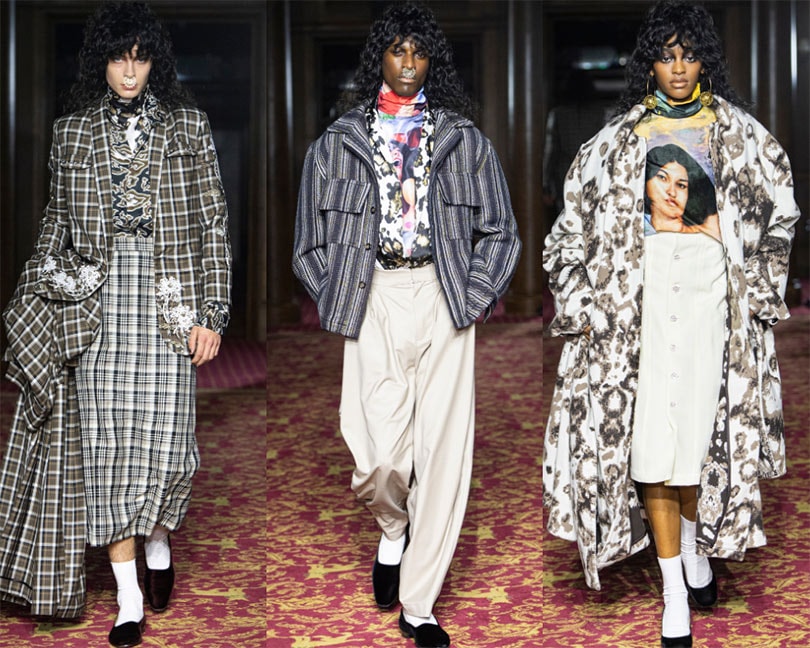 As with all his collections, it was a visual feast with bold silhouettes that blurred the lines of gender and sexuality, with opulent glamour and artisanal textiles with painterly silks, high-shine oriental prints, and crystal embroideries.

Crutchley also highlighted the next generation within his collection using a special wool and merino blend check and stripe fabric designed by Jaeyong Kim, winner of The Woolmark Company Award at TexSelect which the British designer was a co-judge. This fabric was specially produced by Johnstons and used in the collection across a number of styles.

To conclude his collection, Crutchley added: “These clothes are the sum of many parts, many places – an impassioned call-to-arms for a revived internationalism.” 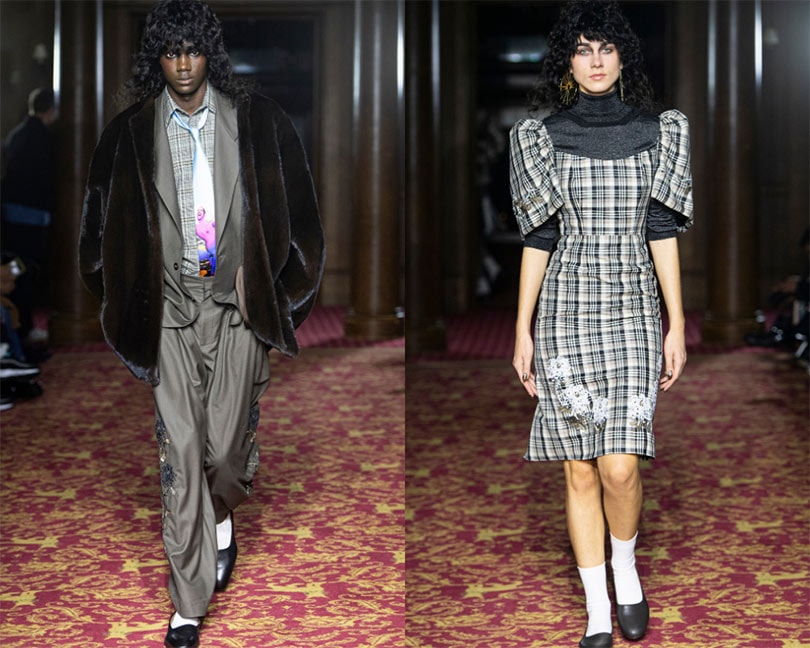 Grace Wales Bonner is one of the rising stars of British fashion, and her autumn/winter 2020 collection was one of the standout shows at this seasons London Fashion Week Men’s where she highlighted her Caribbean roots and 70s London reggae as she drew on classic designs and the colours of the Rastafarian flag.

In the show notes, Wales Bonner explained that she was inspired, in part, by John Goto’s Lovers Rock series of photographs of British African-Caribbeans at Lewisham youth centre finding love at underground parties, as well as her own family history.

While nostalgic may have been the inspiration, this was not a retro collection, the tailoring with the trench coats, mod blazers in two-tone tweeds and windowpane check, and trousers looked modern, styled alongside chunky knits, heritage fabrications, baker boy caps and streetwear touches with her second collaboration with Adidas Originals, which included tracksuits and jersey tops.

2019 was a big year for the emerging designer, it started with an exhibition at London’s Sepentine Gallery, then she scooped the BFC/Vogue Fashion Fund prize, which came with an investment of 200,000 pounds, and she even collaborated with Christian Dior’s Maria Grazia Chuiri. The biggest boost to her profile though might have been when the Duchess of Sussex wore one of her designs to present her newborn son, Archie to press last May. 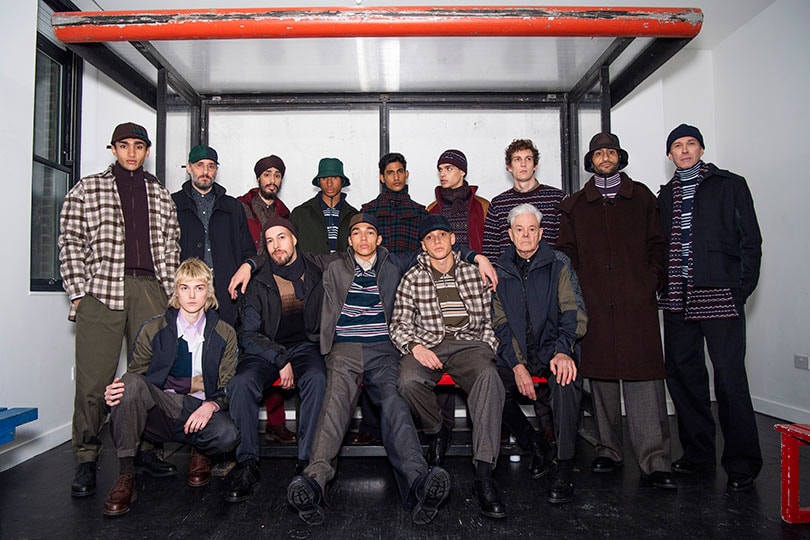 For autumn/winter 2020 Lou Dalton looks to her past, taking cues from her working-class background and her passion for the outdoors and textiles to create a contemporary and practical menswear collection that appeals to men of all ages.

As with previous collections, Dalton showed why she is known for her winter wear, with collaborations with long-term collaborators Gloverall and John Smedley at the heart of AW20, with heavy knits crafted in 100 percent lambswool sitting alongside long-sleeved striped polo shirts sit and colour-blocked rugby shirts, while ombre knits in mohair blends exemplify the two-tone motif, all elevating the classic menswear garments. 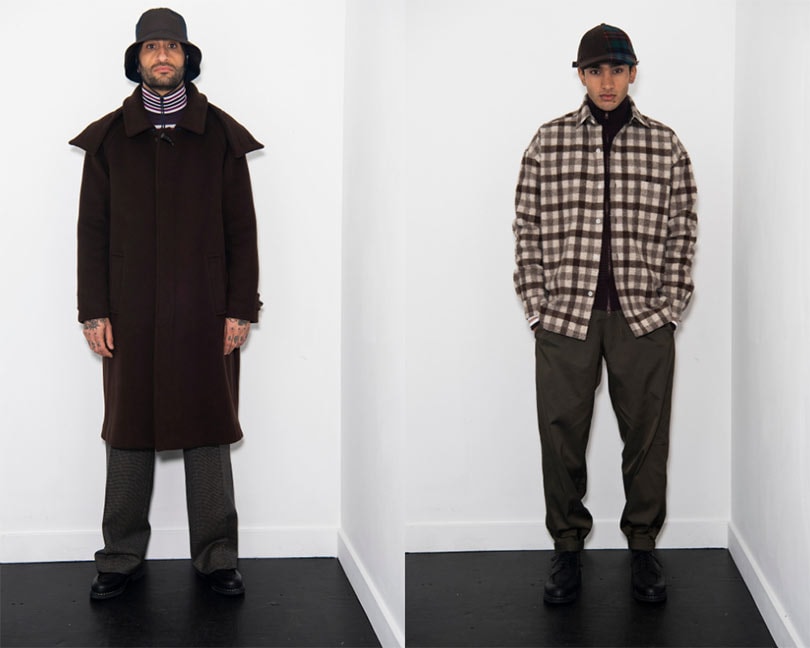 Other knitwear styles include a delicate and sophisticated take on animal print using a tonal jacquard knit technique, and Fairisle, a key style for Dalton is this season reversible, offering both a traditional and a deconstructed take on this menswear staple.

There was also a collaboration with New Era this season, adding bi-colour and patchworked baseball caps to complement Dalton’s designs. 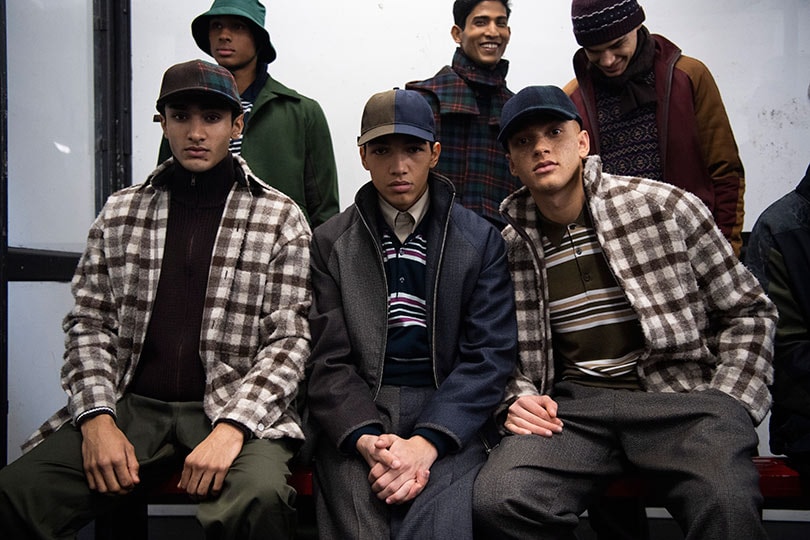 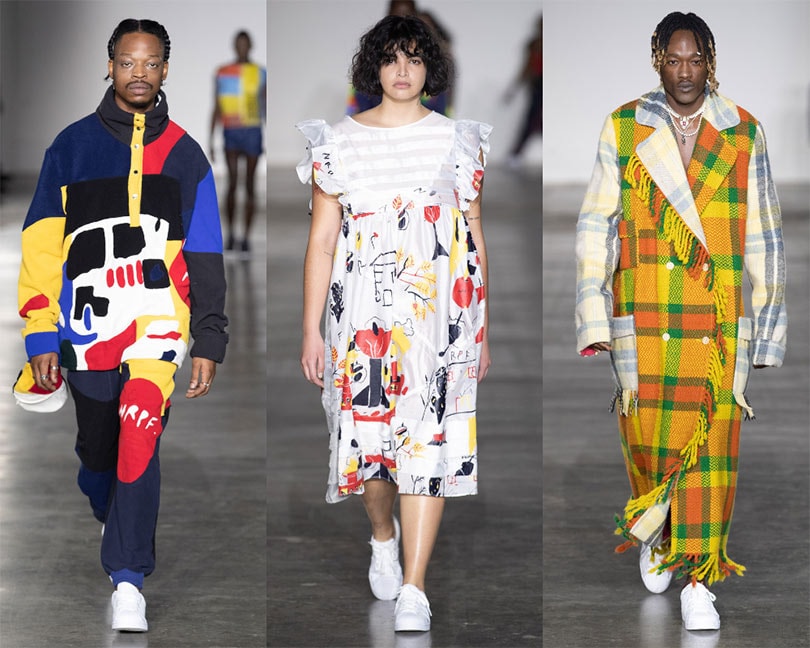 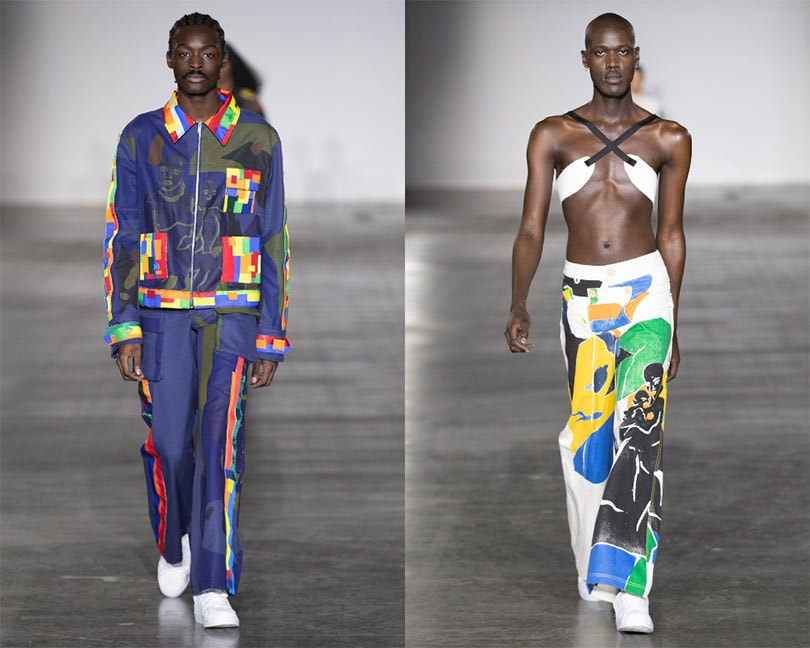 Known for her activism within her fashion designs, for autumn/winter 2020, Williams was inspired by her work with UK charity The Magpie Project, a grassroots organisation that helps homeless mothers and children. This led Williams to create a colourful collection celebrating motherhood, childhood, sisterhood, and family, highlighting the importance of what she calls a “powerful bond”.

From working closely with the children of Magpie, garment construction and craft techniques from children’s clothing shaped the collection, with hand-knitted jumpers and fringed blanket coats, as well as patchwork-style prints and Lego-esque colour blocking featuring on tracksuits. This was all brought together with illustrations seen across trousers, parkas, and knitwear. 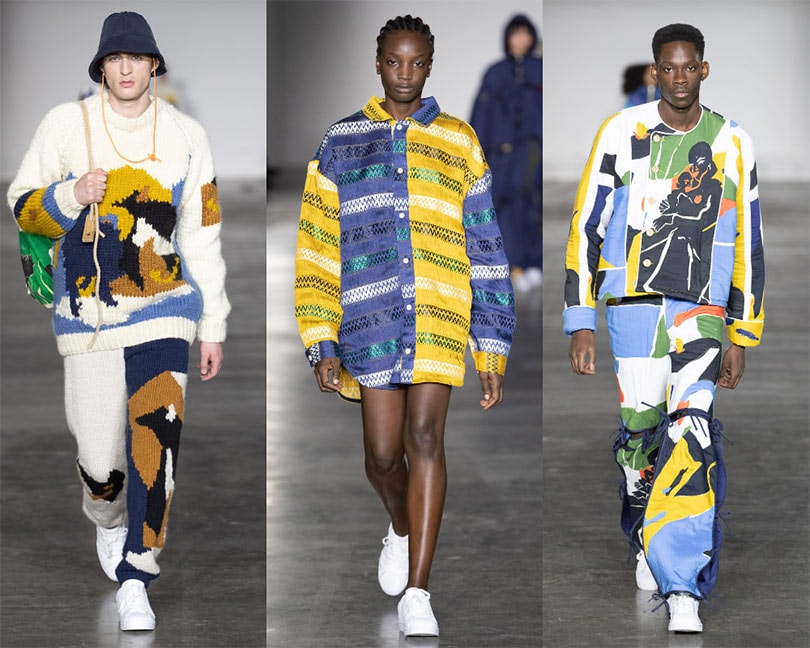 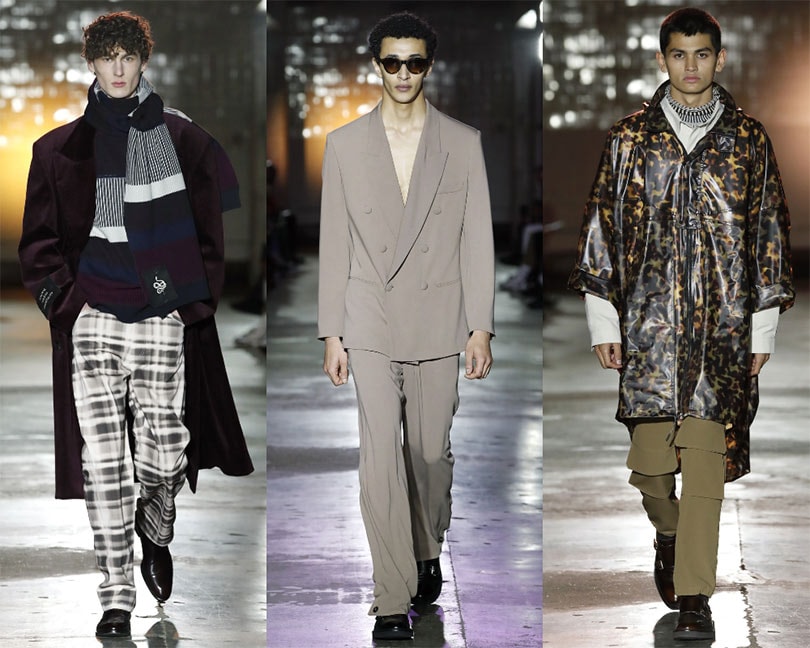 “Every sun has to set – to rise again,” explains London-based label Qasimi in its autumn/winter 2020 show notes, which showcased a new chapter for the brand following the death of Khalid al-Qasimi in July 2019.

The cutting-edge streetwear label is now being driven forward by the late designer’s twin sister Hoor Al Qasimi, who presented the final collection designed by her brother before his passing, with help from the brand’s head of design, Adam Rice, and continues to draw inspiration from the Middle East. 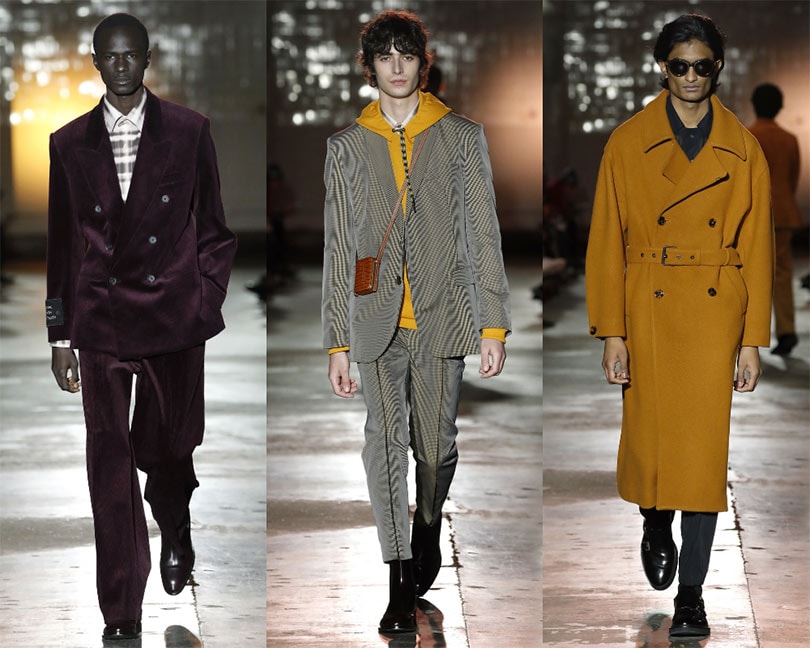 Like with previous seasons, there was an urban nomad feel to the collection, if not a little darker and moodier than usual, with intensely rich earth tones of Persian plum, Arabica, scarab lifted by warming hues of myrrh and turmeric, alongside greys, black and off-white.

For autumn/winter 2020, the silhouette is closer to the body, evolving the nomad’s style, with relaxed tailoring now slightly cinched, softened by deep velvets and corduroy, while street elements have been refined using more “elevated materials and considered detailing” with printed long-sleeve T-shirts and a rising sun emblazoned on the back of an oversized shirt.

This was a fitting tribute to Qasimi’s memory, as well as starting point for the rebirth of the brand moving forward, with modern interpretations of smart-casualwear, mixed in with strong tailoring, and streetwear influences.

As the final line of the show notes read: “Renewal, Rebirth, Immortality’ – a promise to strive to continue Khalid Al Qasimi’s legacy.” 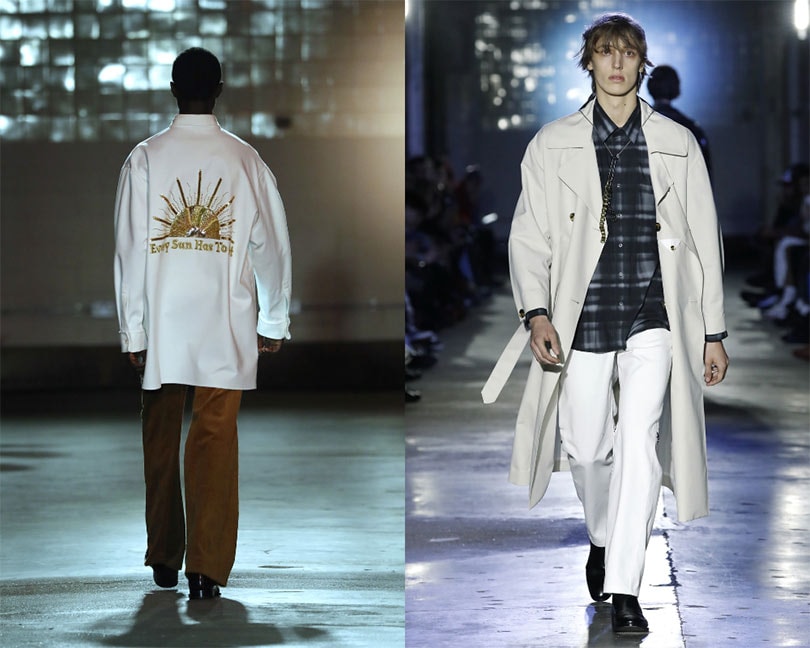