When it comes to the fashion industry’s issue of sustainability, the problem isn’t just that it's churning out clothing in unsustainable quantities - it’s also using synthetic fibres like polyester that cause enormous harm to the environment. Fortunately, trailblazing brands around the world are developing new materials to reduce the damage.

Swiss brand Qwstion is one of them. The Zurich-based label, founded in 2008, makes premium bags and accessories using Bananatex, its proprietary fabric made from plants of the banana tree.

The fabric is known locally as ‘Banana Hemp’ or ‘Abacá’ in the Philippines where it is grown before being processed into a viable alternative to synthetic fabric. The replacement of such fibres is currently a huge talking point surrounding efforts to clean up the fashion industry.

Once touted as a miracle fibre thanks to its cheap, light and durable properties, polyester has become the dominant material used in garment production today. But it has come under scrutiny in recent years due to the release of microfibres. According to a 2017 report from the International Union for Conservation of Nature (IUCN), an estimated 35 percent of all microplastics in the ocean came from the laundering of synthetic textiles like polyester, which have been woven deeply into the heart of the fast-fashion industry.

FashionUnited spoke to Qwstion co-founder and creative director Christian Kaegi about the creation of Bananatex, the decision to make the fabric open source, and the price of sustainable fashion.

What fabrics were you using before Bananatex?

First we used cotton - nonorganic, standard cotton. That was basically the only thing we could find when we started out that had the performance we were looking for when used in bags. Then the next big step was to create our own GOTS-certified organic cotton canvas. We still use it today in some of our collections - it comes from Turkey and is processed in Hong Kong.

Before arriving at cotton we also did a bunch of tests with other materials like bamboo, hemp and linen - to name just a few. They were all natural fibres with an inherent strength, which was something we really need for our bags, but we didn't arrive at a satisfactory point when developing those fabrics.

What types of problems were you facing?

It was just difficult to find a steady source of the fibres. We considered using nettle, for example, which was historically quite common for strong rucksacks and was used by the Swiss army in around the 1920s-30s. Back then there was a steady source being harvested and produced, but that's no longer the case.

With hemp we did manage to find a source in Europe. We had a goal to get the entire supply chain contained in a very close geographic area around Switzerland but we had problems there too. We found a steady source of hemp in Belgium, then the spinning would be done in Northern Italy and finally the weaving on specially modified looms in Switzerland. But that whole process meant a total trucking distance of around 4,000 kilometres within Europe.

We realised doing it that way had a bigger environmental footprint in the end compared to what we could achieve in Asia which ultimately was decisive in our decision to explore the region where we eventually came across the banana fibre.

How did Bananatex come about?

We were doing a lot of research of hemp with the Asian partners we were already working with on the organic cotton and they mentioned they knew a spinning mill that had just been starting up that was using banana fibre. They were very early on in their experimentation stage so we came in at a really good time and could develop something together with them. That led to a three-year period of experimentation until we achieved the textile we were really happy with, Bananatex. 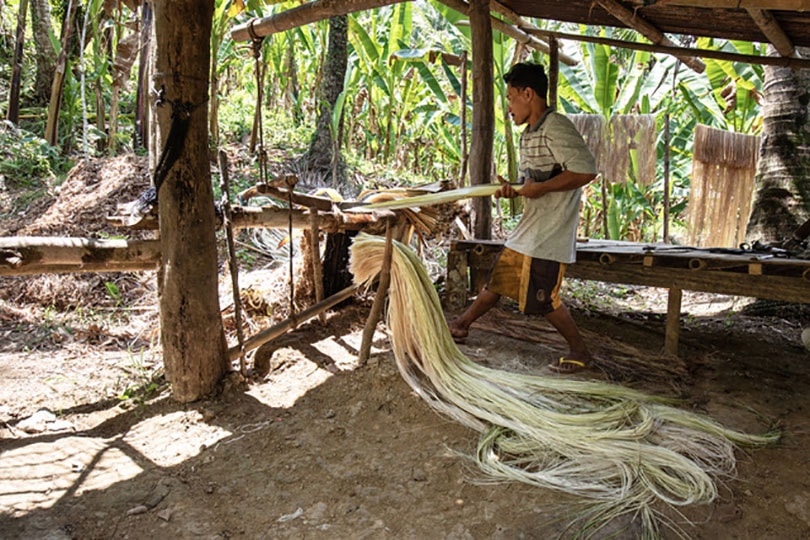 How much of your product range does Bananatex now make up?

I would say now Bananatex is just about taking over from our other materials. As soon as we knew Bananatex was performing in the way we wanted to and hit all the sustainability criteria, we decided to implement it as soon as possible across all the range. If you see what we produced in the last two years then it has been around 80 percent Bananatex. We expect almost all our products to be using Bananatex in the next three years.

How does the pricing shape up to other fabrics?

How have you then managed to not significantly change price points?

Using something this expensive has forced us to completely reconsider everything about the design of our bags. The first launch of Bananatex was a minimal collection and there it was really about minimizing the number of parts to compensate what we could in terms of higher prices so we could, in the end, reach a price point that was still demographic. Our prices have gone slightly up but I would say it's ultimately the price of sustainability.

How does it shape up in terms of durability to other plastic-based products?

If you look at the Martindale abrasion test [a unit for quantifying the abrasion resistance of textiles] then we are at a level of around 30,000 which compares to thinner versions of Cordura. Heavyweight versions of Cordura might go over 100,000. But I think it is important to really consider the ‘appropriateness’ of materials. That is a criteria where performance plastic-based materials are going immensely far - you could carry a tonne in your backpack, but who needs to do that? When designing we really looked at appropriateness and thought about how much performance does anyone really need for the intended purpose. That was our focus. 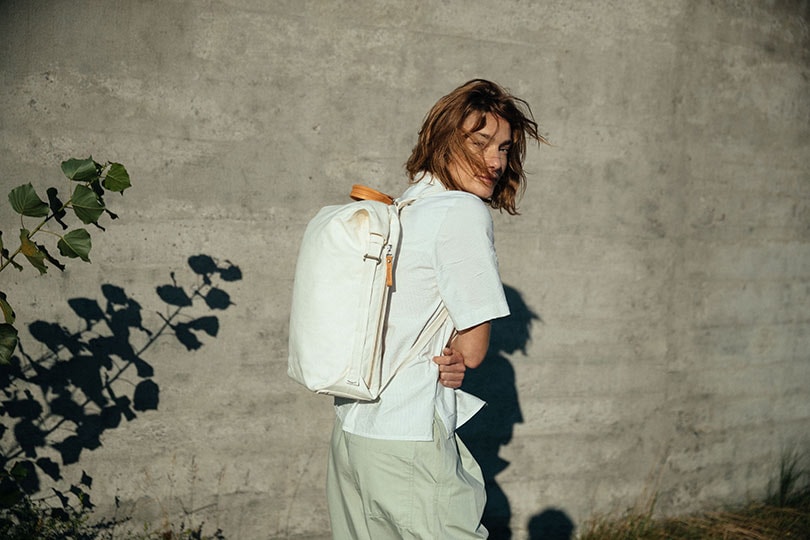 And the bags are biodegradable?

Yes. From late 2020 we switched out our nylon threads for Tencel threads. So now once you’ve taken off the YKK-Zipper and metal hooks, which can both be recycled, you can literally just put it on your compost. We’ve tested it ourselves and after about six months it is gone. The idea for us was really to make a product that comes from plants and can eventually go back to plants and nature.

You say you develop and source almost all materials directly. Which don't you at the moment?

We still use leathers in some of our products. We know there are plenty of vegan alternatives out there but most of them involve plastics at this stage and don't offer the same durability as we are looking for. We’ve also done our own experimenting with mushroom-based materials but again not achieved the same quality. We know there is a lot of controversy about leather but the cowhide we use is the by-product of other industries so we’ve decided to continue to use it.

Why did you decide to make Bananatex open source?

The decision came naturally to us because we wanted to create change in this world and in this industry which is already so excessive in production and waste. As soon as we saw Bananatex could really offer a viable alternative to plastic-based fabrics we knew that we could have a big impact if we shared it with others rather than keep it exclusive to our own ranges. 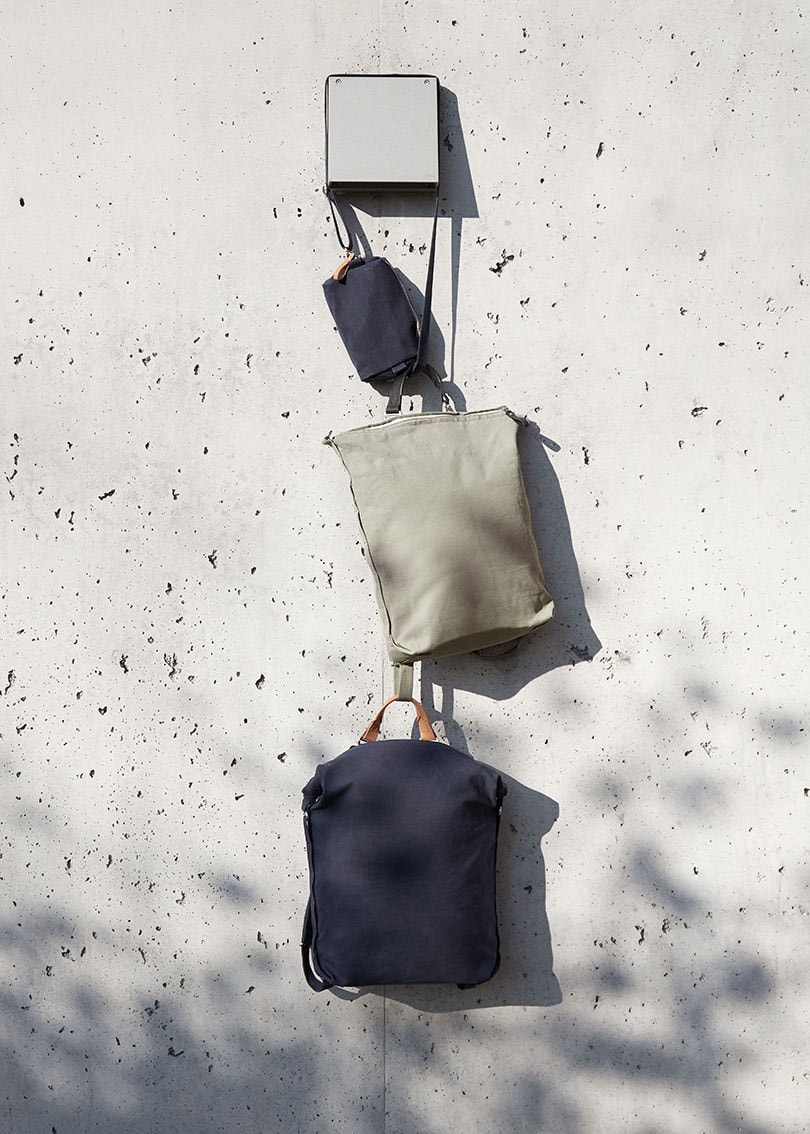 How much interest have you seen so far and where is it coming from?

The response has been incredible - since launching it about two years ago we have received thousands of requests. Though we can’t give any names because they’re all still in the prototyping stage, we have seen interest across the board, including some big sportswear companies and luxury brands, jewellery and watch brands too. We’ve also seen interest from outdoor brands but to a lesser extent, perhaps because the outdoor industry is very performance- and price-focused. We’ve also seen interest from other sectors like the furniture and automotive industries.

When can we expect to see other brands using Bananatex?

You can expect an announcement regarding a big-name fashion brand in the first quarter of the year.

What’s the future for Bananatex?

We really want to further improve our transparency. At the moment we work with suppliers so we have a reseller in between us and the farmers of the banana plants. About 400 micro-farms are cultivating the banana fibre and bringing it to the warehouse. Right now we are working with our partners to build up a completely transparent supply chain where we will actually know exactly which farmers are making which fibre.