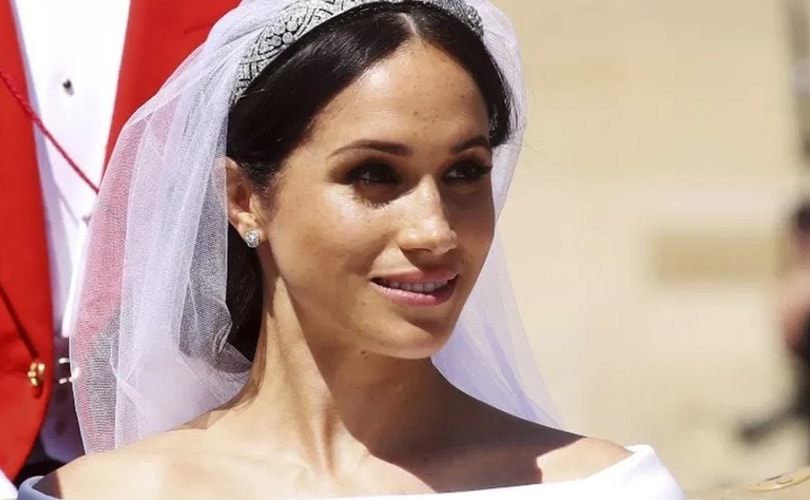 After months of speculation over who Meghan Markle would choose to design her wedding to Prince Harry, the American actress, who became Her Royal Highness The Duchess of Sussex, stepped out of a vintage Rolls-Royce in a minimal Givenchy Haute Couture wedding dress by British designer Clare Waight Keller.

Many designers had been tipped to design the covet wedding dress ranging from Ralph and Russo, Stella McCartney, Erdem and even Burberry, but in the end the Duchess opted for the “timeless minimal elegance” of Givenchy Couture after meeting with Waight Keller earlier in the year.

In a statement from Kensington Palace, it said that Ms. Markle chose to work with Waight Keller for her “timeless and elegant aesthetic, impeccable tailoring, and relaxed demeanour”.

It went on to add that the Duchess of Sussex also wanted to highlight the “success of a leading British talent” who has now served as the creative head of three globally influential fashion houses – Pringle of Scotland, Chloé, and now Givenchy, where she is the first female artistic director at the house.

Waight Keller is known for her femininity and beautiful craftsmanship and Markle’s wedding gown is no exception, while it may not have any embellishments, this dress made a statement in its design, which the fashion house stated was focused around the graphic open bateau neckline to “gracefully frame the shoulders and emphasis the slender sculpted waist” of the bride.

Fabric of the wedding dress was also very considered, with Waight Keller doing “extensive research” in fabric mills across Europe to create the exclusive double bonded silk cady that was used to perfect the round sculptural look. The statement explained, that the silk cady it developed has a soft matt lustre, whilst the bonding process and pure white colour was chosen by the bride and designer to bring a “fresh modernity” to the dress.

The modernity of this dress was showcased beautifully with the six meticulously placed seams in the design, with the lines of the dress extend towards the back where the train flows in soft round folds cushioned by an underskirt in triple silk organza. The final touch was the elegance of the slim three-quarter sleeves. 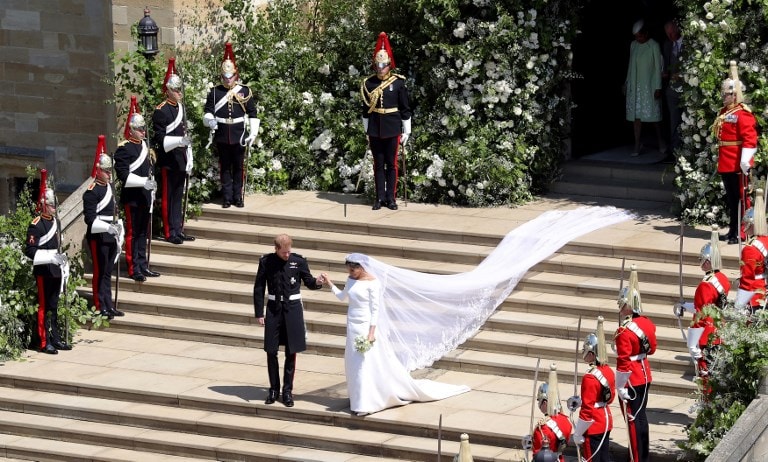 The Duchess of Sussex paired her refined modern Givenchy Couture wedding dress, the first bridal look for Givenchy under the direction of Waight Keller, with a five-metre long veil, which was held in place by Queen Mary's diamond bandeau tiara, on loan from the Queen, made of diamonds and platinum. In addition, the bride wore earrings and a bracelet by Cartier.

The veil itself also features the importance of the Commonwealth, featuring a distinctive flora made up of each 53 Commonwealth countries united in one spectacular floral composition, which the press statement said was important to Markle as she wanted to “express her gratitude for the opportunity to support the work of the Commonwealth by incorporating references to its members into the design of her wedding dress”.

In addition to the flora of the Commonwealth, Markle also selected two personal favourites, the Wintersweet (Chimonanthus praecox), which grows in the grounds of Kensington Palace in front of Nottingham Cottage, and the California Poppy (Eschscholzia californica) the State flower from her place of birth, California. These were symmetrically placed at the very front of the veil, while crops of wheat are delicately embroidered and blend into the flora, to symbolise love and charity.

Royal wedding dresses have such an impact on the industry, after Princess Diana’s 1981 wedding gown brides around the world wanted romantic details and dramatic trains, while Kate Middleton sparked a trend for more covered-up, traditional lace bridal wedding dresses, following her wedding to Prince William in 2011, will Markle’s refined modernity means brides-to-be will be looking for more sophisticated, timeless and minimal styles for their big day?

Waight Keller also designed the six young bridesmaids’ dresses, which were designed to have the same “timeless purity” as the bride’s dress. Each dress was sculpted in Ivory silk Radzimir and featured short puff sleeves, a double silk ribbon detail tied at the back in a bow and pleated skirts to create a relaxed and luxurious silhouette.

The bridesmaids also wore white leather Aquazurra shoes, each monogrammed with the bridesmaids initials, and the wedding date, as a gift from the bride as a keepsake of the special day.

The groom, Prince Harry wore the frockcoat uniform of the Blues and Royals, tailored at Dege and Skinner on Savile Row, made from blue doeskin, single-breasted in style with a stand-up collar, completed with figured braiding of Regimental pattern.

His look was replicated in the page boys’ uniforms who wore miniature version of the Blues and Royals frockcoat, featuring their initials embroidered in gold on their shoulder straps.

Her Majesty The Queen chose a flared dress in lime, lemon, purple and grey printed silk designed by Stuart Pravin, which was teamed with an edge to edge coat with a frogging fastening in lime silk tweed.

While the mother of the bride, Doria Ragland, who accompanied her daughter on the trip to St. George’s Chapel, wore a pale green custom dress and day coat designed by creative directors of Oscar de la Renta, Fernando Garcia and Laura Kim. This was accessorized with a custom hat designed exclusively for her by British milliner Stephen Jones, who also created custom hats for several of Markle’s closest friends.

The couple married at St. George’s Chapel on the Queen’s Windsor estate in front of 600 invited guests, which included many celebrities including Victoria and David Beckham, Oprah Winfrey, Serena Williams, Priyanka Chopra, George and Amal Clooney, as well as the cast from her TV show ‘Suits’.