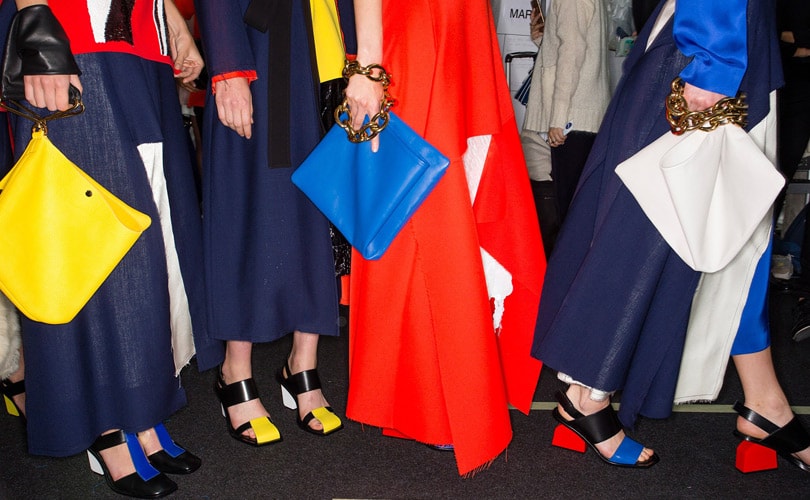 Milan fashion week kicked off on a colourful note on Wednesday as Blugirl designer Anna Molinari extended the hedonistic feel of her spring collection into her outfits for next fall and winter. Three-quarter length raincoats came in floral and other vibrant prints while the collection for the younger sister to Molinari's Blumarine brand was also dotted with bright Nordic-inspired knitwear.

Molinari declared last year that it was time for Italian fashion to loosen up a little and have some fun after years of gloom created by a triple-dip recession and a sense that Milan was losing its edge creatively and in terms of its rivalry with Paris and fast-rising London and New York.

That pessimism appears to have been banished this year with commentators talking up a new generation of younger designers emerging to pick up the baton from veterans such as Molinari, Miuccia Prada and Giorgio Armani. The upbeat mood has also been bolstered by what many industry insiders see as belated government recognition of the importance of fashion to the Italian economy.

The perceived shift in attitude was underlined on Wednesday by the presence of Prime Minister Matteo Renzi at the official opening lunch for the fashion week. Italy's textiles, clothing, leather goods and footwear sectors generated a remarkable 61.2 billion euros in 2014, the last year for which definitive figures are available.

The 2015 figure is forecast to be up on that by between 1.4 percent -- the conservative figure from the national chamber of fashion -- and the seven percent that independent analysts see as more likely. Around three quarters of all sales are exports.

Top of the pecking order among the young guns is Alessandro Michele whose latest work for Gucci, the global megabrand he is credited with completely reinventing, was the mostly keenly awaited collection due to be unveiled on the first of six days of shows.

While Michele was putting the final touches to his fashionably delayed catwalk set, Renzi was clinking glasses with designers, manufacturers and representatives from the regions where high value-added textiles are key components of the local economy.

More than 182 collections will be unveiled to buyers, media and fashion obsessives from all over the world over the course of the next six days with 74 catwalk shows staged in every available venue across Italy's economic capital, itself still buzzing after the success of last year's World Expo.

"It is the highest level of participation we have had since 2009," noted a delighted Carlo Capasa, chairman of the national Chamber of Fashion. The actual number of collections is higher than the 182 registered by the chamber: those outside the official structures include Dolce and Gabbana and many up-and-coming young designers looking for a break.

With Italy returning to, albeit timid, growth last year trade body Sistema Moda Italia (SMI) is predicting a rise in Italian womenswear sales for 2015 of 2.8 percent to 12.8 billion euros. "The interesting aspect of it is that there has been a revival in the domestic market which is encouraging looking forward to the coming years," said SMI chief Gianfranco di Natale.

"We have felt optimism coming back in the recent trade fairs held in Milan." The city's payoff for hosting hundreds of thousands of extra visitors during the Expo was meanwhile reflected in a recent Boston Consulting Group study for the Italian luxury sector's collective body, Altagamma.

Thanks to the Expo effect, Milan has gone from fifth preferred destination of shoppers for luxury goods to third, with the improvement registered most strongly among prosperous young people who appear to have been convinced that the city is much cooler and trendier than it previously appeared. (Angus Mackinnon, AFP)