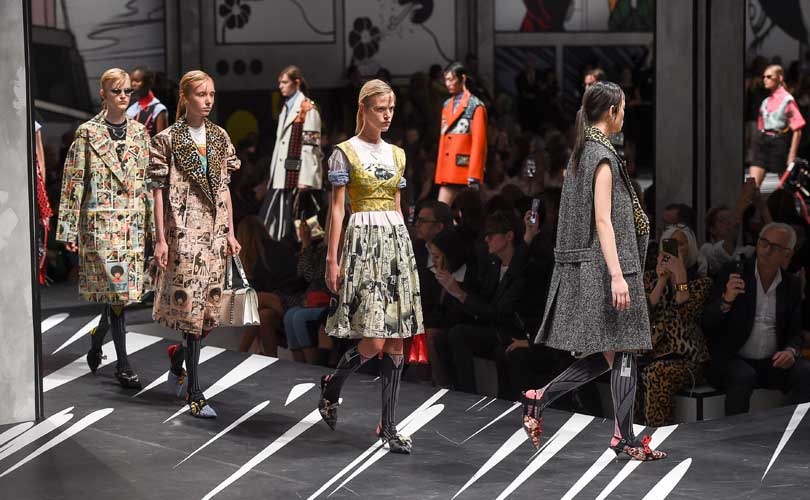 Miuccia Prada delivered an unflinching defence Thursday of her creative leadership of the flagging luxury giant that bears her name, saying her work is more important than sales.

Her Spring/Summer 2018 collection had just gone down the catwalk at Milan Fashion Week, when the billionaire businesswoman and designer reacted to the lacklustre sales that have dogged Prada. 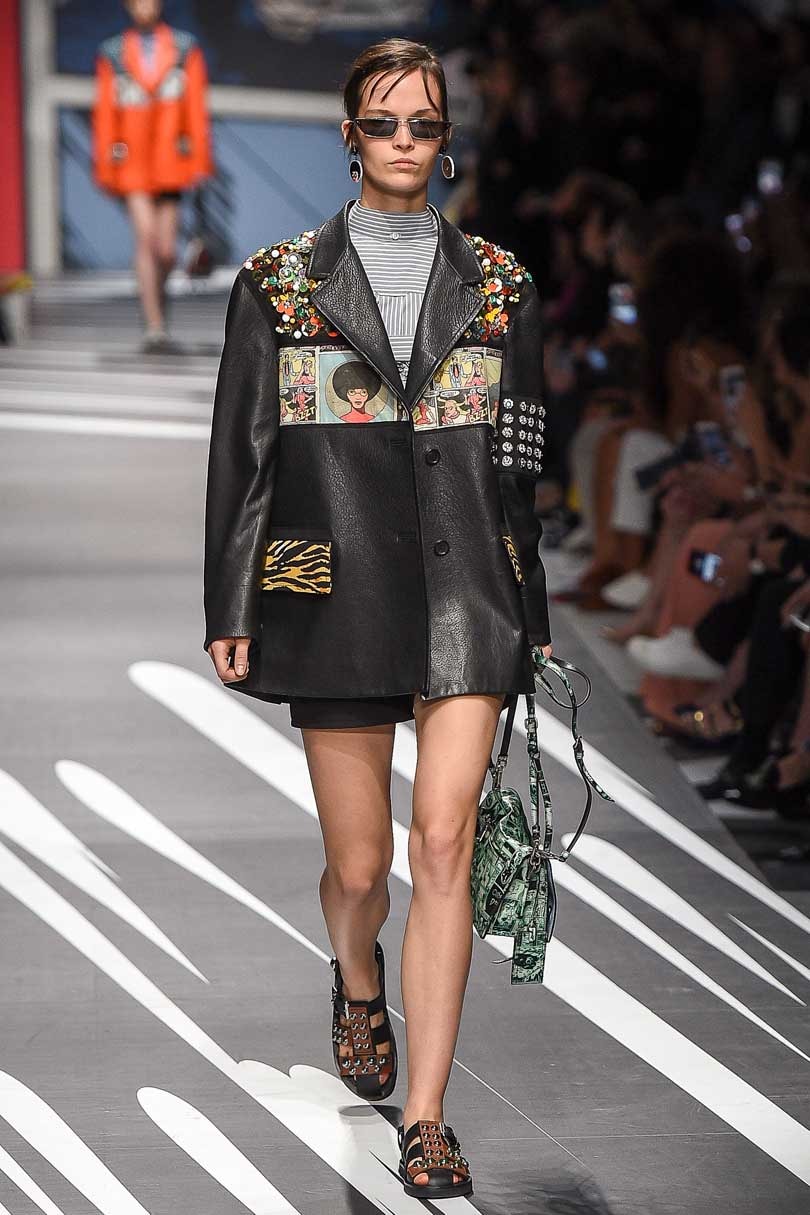 The wider luxury business hit the doldrums in recent years due to a collision of culprits like a slowdown in Asia, currency volatility and customers staying home after a series of terror attacks in Europe. But houses like Gucci -- which saw sales in the first quarter of 2017 grow at their fastest pace in 20 years -- have bounced back, while others are struggling to find their mojo.

Prada reported earlier this month a drop in profits and a fall in revenues in the first half of the year, saying it was overhauling its operations with the aim of generating more regular income.

Still Prada hit the catwalk with a fighting spirit, showing a collection adorned with the studs made famous by punk rockers' black leather jackets. There was also a mash-up combination of flowing floral dresses, striped businessman-type shirts and skinny trousers which stopped at the calf. 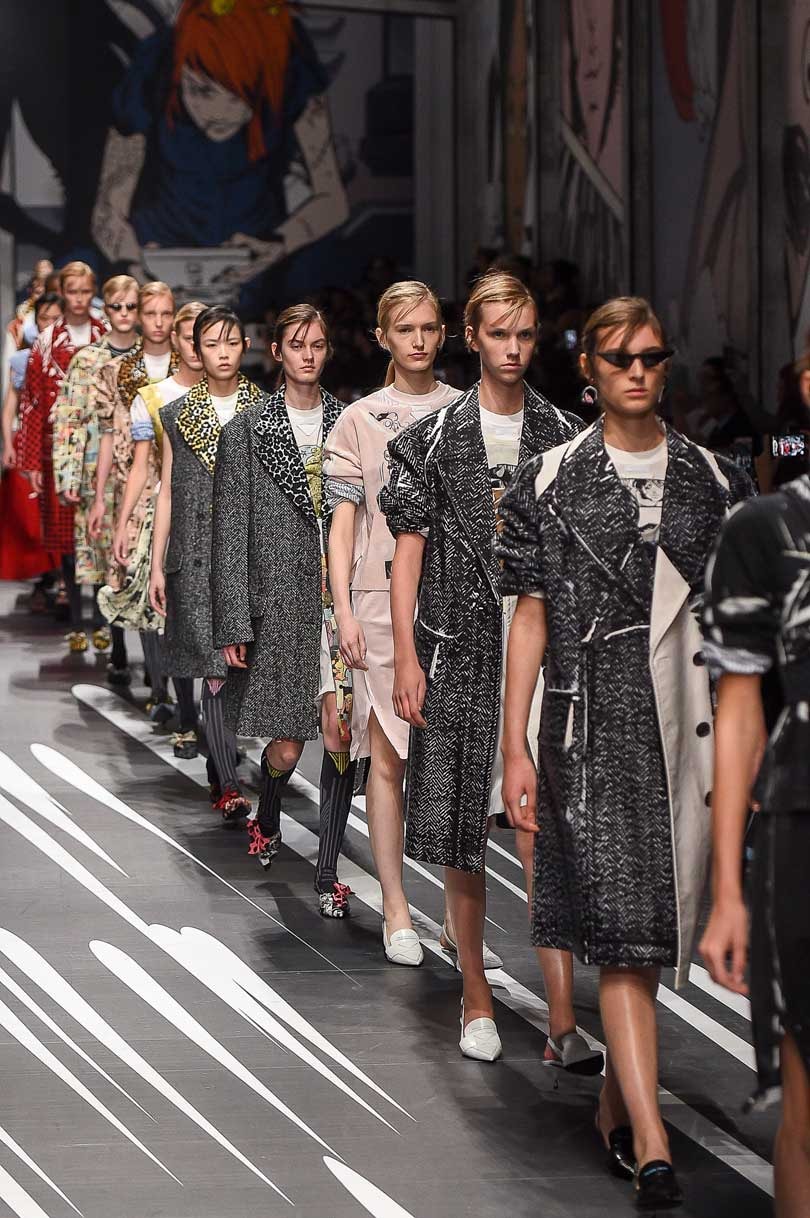 The idea behind the collection was a blank slate, and Prada said nearly all of the dresses began white and were subsequently printed over with colours. She also mixed leopard print with other patterns and added images drawn by women comic book artists.

Prada said she is a "a bit" angry over women's treatment in the world and her designs were an encouragement for them to be strong. "I feel we should really start being combative. I am kind of encouraging strength," she added.

Karl Lagerfeld's designs couldn't have been more different, with a tropical chic collection that was all see-through and skin with colours cool enough to soothe your sunburn. The latest designs from the veteran German designer emerged "in a swirl of Caribbean colour and flavour", as he said in his notes on the collection for Fendi. 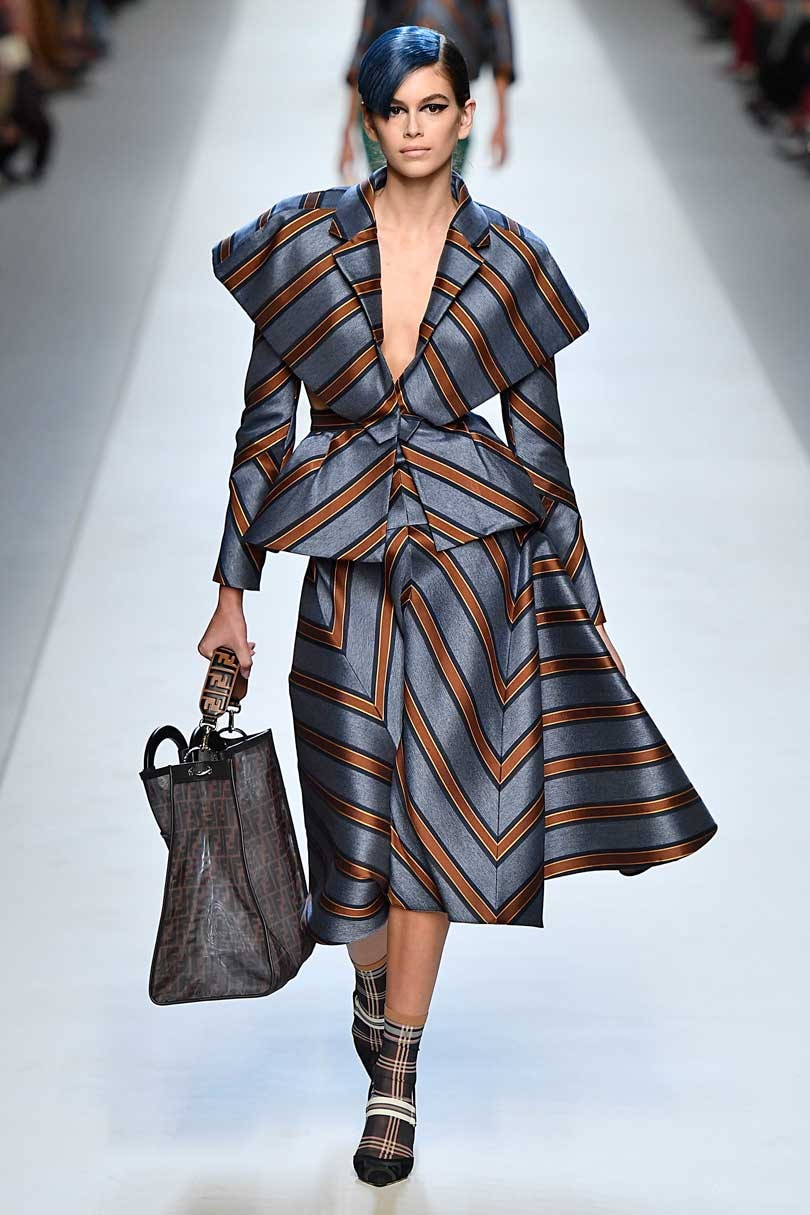 Superstar models Gigi Hadid and Kendall Jenner helped show off the looks to the selfie-snapping crowd that included fashion godmother Anna Wintour in the front row. To the sounds of jungle electro, there were stripes big and small on display as well as skin peeking out from just above the hip. Fringes fanned out like palm fronds on the strap of one of the bags -- which are among the accessories the house is famous for.

There was not a dour trace in the collection, which comes just over three months after the death of Carla Fendi. She was one of five sisters who inherited a small leather goods workshop that they turned into a luxury juggernaut. 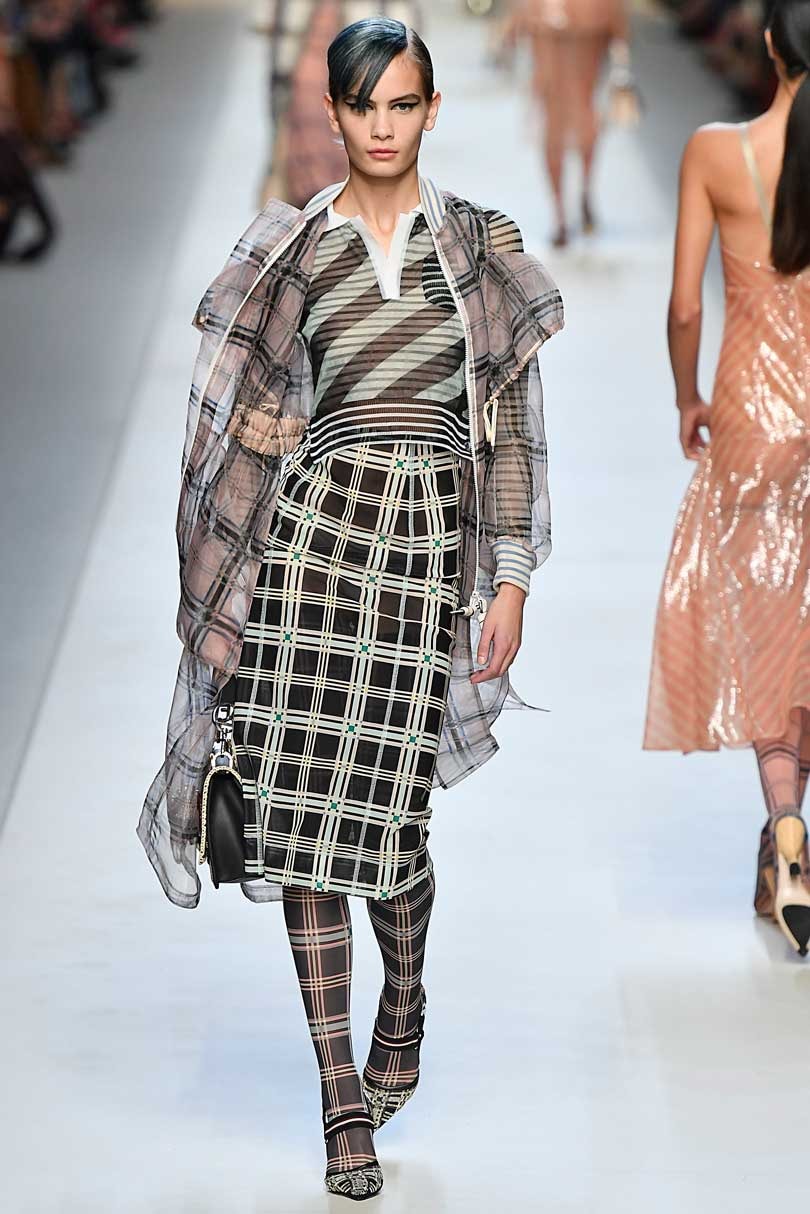 Lagerfeld, who has designed collections for the house for over 50 years, has often been referred to as the sixth Fendi sibling. On the catwalk the gauzy skirts and coats came in colours of ocean blue, seafoam green and coral pink. Pin-striped cotton skirts hugged high on the waist.

Amid all the seaside holiday vibes, Lagerfeld sent down the runway a wide denim trench coat and a brown leather dress that looked fit for a frontierswoman. The collection also saw Fendi unveil the latest addition to the eye-wateringly expensive range of accessories that drive the company's revenues.

The Mon Tresor bag is leather with metallic pearls and the new Runway tote is transparent mesh with rattan handles. French luxury group LVMH, which owns Fendi, said earlier this year that it was cautiously confident for 2017 after posting record results last year. Bottom-line net profit grew by 11 percent to 3.98 billion euros and revenues were up five percent at 37.6 billion euros. 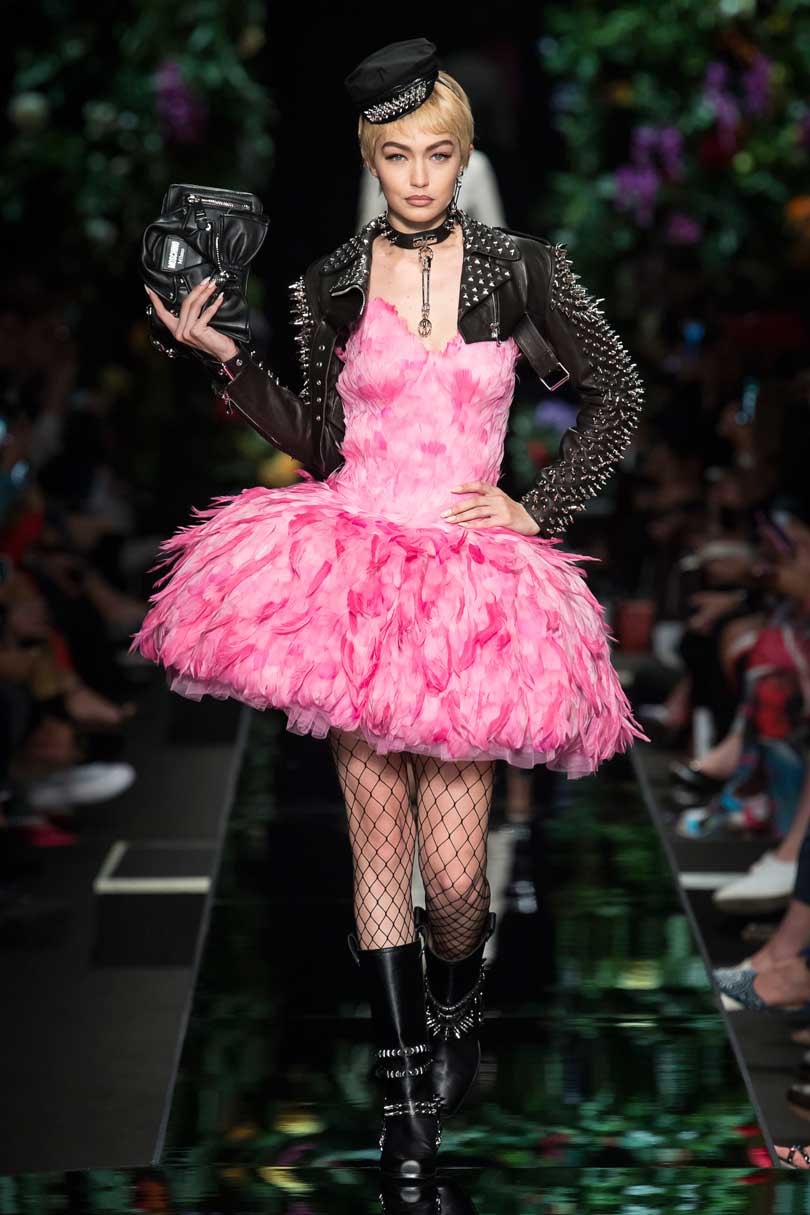 Day two of Milan closed out with a rock'n'roll riot from Moschino, which is under the creative lead of American Jeremy Scott. He has been called the last rebel in fashion and on Thursday did his best to live up to that label. His show opened with motorcyle jacket-wearing models sporting miniature versions of the cap made iconic in Marlon Brando's 1953 biker flick "The Wild One".

But Scott pivoted from there to models dressed as flowers -- with one showing off an outfit that was complete with the pollen-producing reproductive bit called a stamen. The show climaxed with a model in a furry purple orb that was mobbed by a cloud of butterflies -- a look that drew spontaneous applause from the crowd. (AFP)

The international Fashion Week season for women's ready-to-wear kicks off in the month of September, with all eyes set on New York, Paris, London and Milan for next seasons latest trends. For all the women's wear catwalk season must reads, click here.
fendi milan fashion week Moschino prada womenswear womenswearcatwalkseason