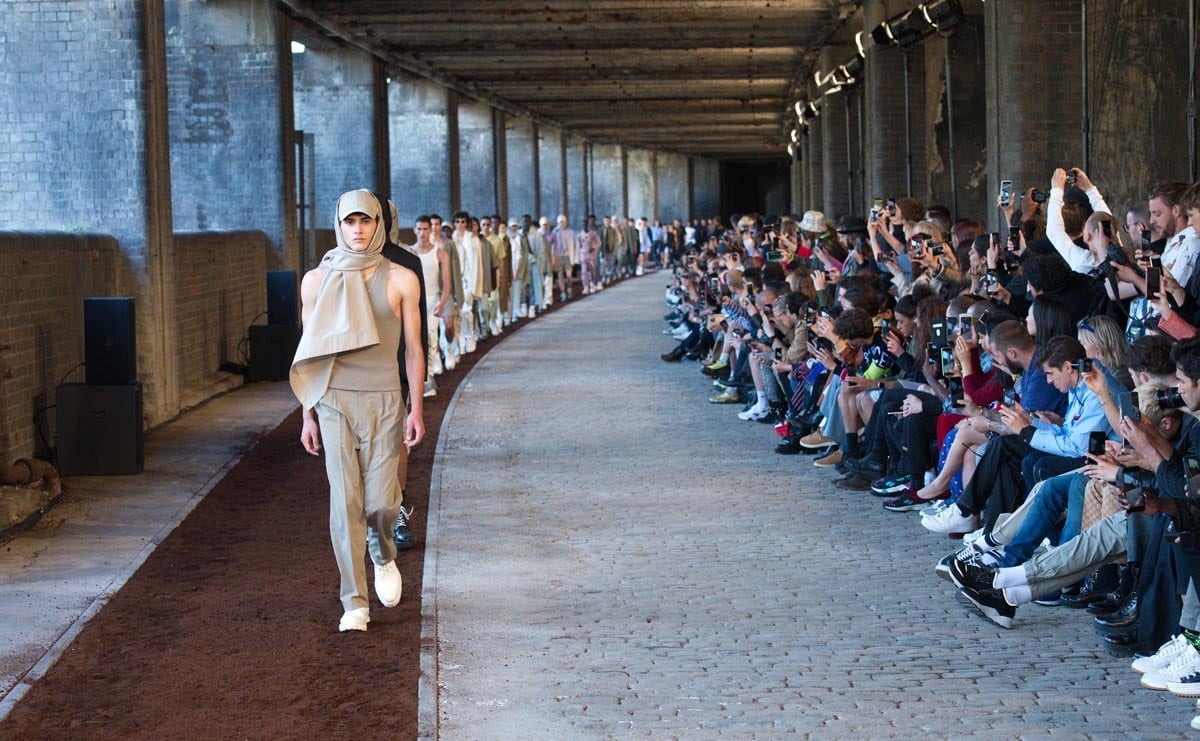 London has always been at the heart of showcasing emerging talent, and this season’s LFWM was dominated by rising stars, from cult fashion streetwear brand A-Cold-Wall* by designer Samuel Ross to Woolmark Prize winner, Edward Crutchley, and Nicholas Daley, which combined fashion with music with his show at the lofty St. Mary-at-Hill church.

But while some big names may have been missing, the LFWM schedule still attracted global buying teams, with FashionUnited spotting buyers from Selfridges, Liberty London, Browns, Bergdorf Goodman, Neiman Marcus, Harrods and Machine-A.

There were also a number of key trends spotted on the menswear catwalk for spring/summer 2020, from laid back tailored shirts, high-shine finishes, sheer vibes, chunky sandals and the continued Nineties revival with cargo trousers and acid brights.

British designer Samuel Ross, who won The Fashion Award’s British Emerging Menswear award last year was inspired by what he called “the scaffolds of society” exploring the “storied relationship between material and emotion”.

His ‘A Material Study for Social Architecture’ collection consisted of the basic wardrobe of streetwear, the hoodie, track pants, and anoraks, but as you would expect Ross elevated his designs to showcase a new refined, modern sophisticated finish to his luxury streetwear separates.

The pieces in cement and clay hues, married perfectly against the backdrop of the industrial Printworks venue in London’s East End, and were “structured, architectural and reductive” added Ross in the show notes, featuring panels, pocket and harness detailing to the oversized forms of outerwear.

There is a maturity and evolution about his spring/summer 2020 collection, it captured the essence of the brand, while still be very commercially viable and shows why Ross is one of the most hyped names on the London fashion scene, who no doubt is destined to become a global name.

A-Cold-Wall* was also named the latest recipient of the BFC/GQ Designer Menswear Fund, at a cocktail reception at members club Annabel’s to close London Fashion Week Men’s. Ross impressed the judging panel, which included Caroline Rush, chief executive officer of the British Fashion Council, who described the designer as the “strongest candidate with the most comprehensive business strategy and decisive plans”.

Ross was awarded 150,000 pounds as well as 12 months high-level mentoring, with the aim of accelerating his business and growth as well as global reputation.

Commenting on his win, Ross said over e-mail to FashionUnited: “I’m maturing the tailoring aspect of the brand, so I’m really excited to be able to further employ men’s wear engineers, and open up to British production with wool and tailoring.

“Ideally, I’d love to start a relationship between A-Cold-Wall and Savile Row and I’m keen to push into mono-store developments globally like in Hong Kong, China and, of course, the UK.” 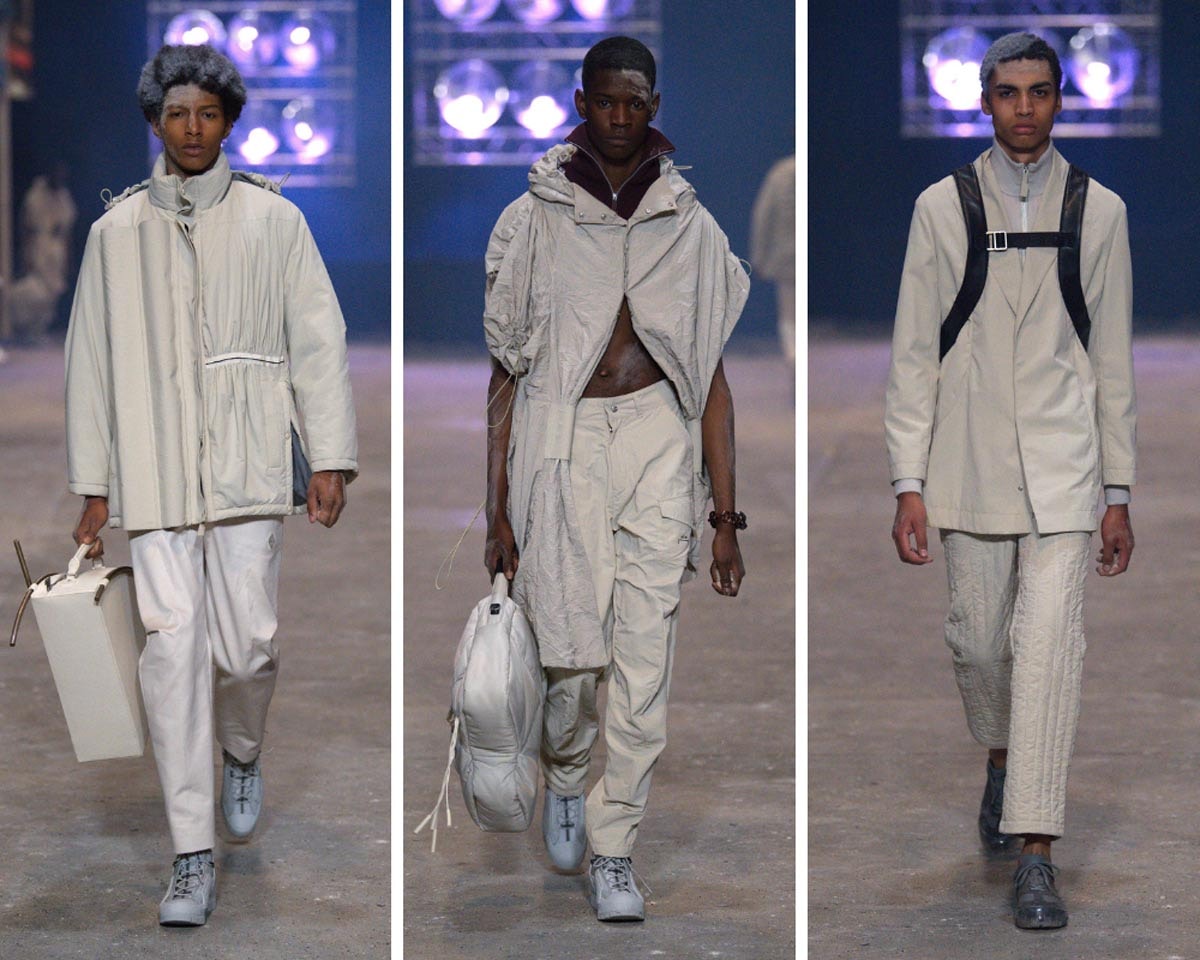 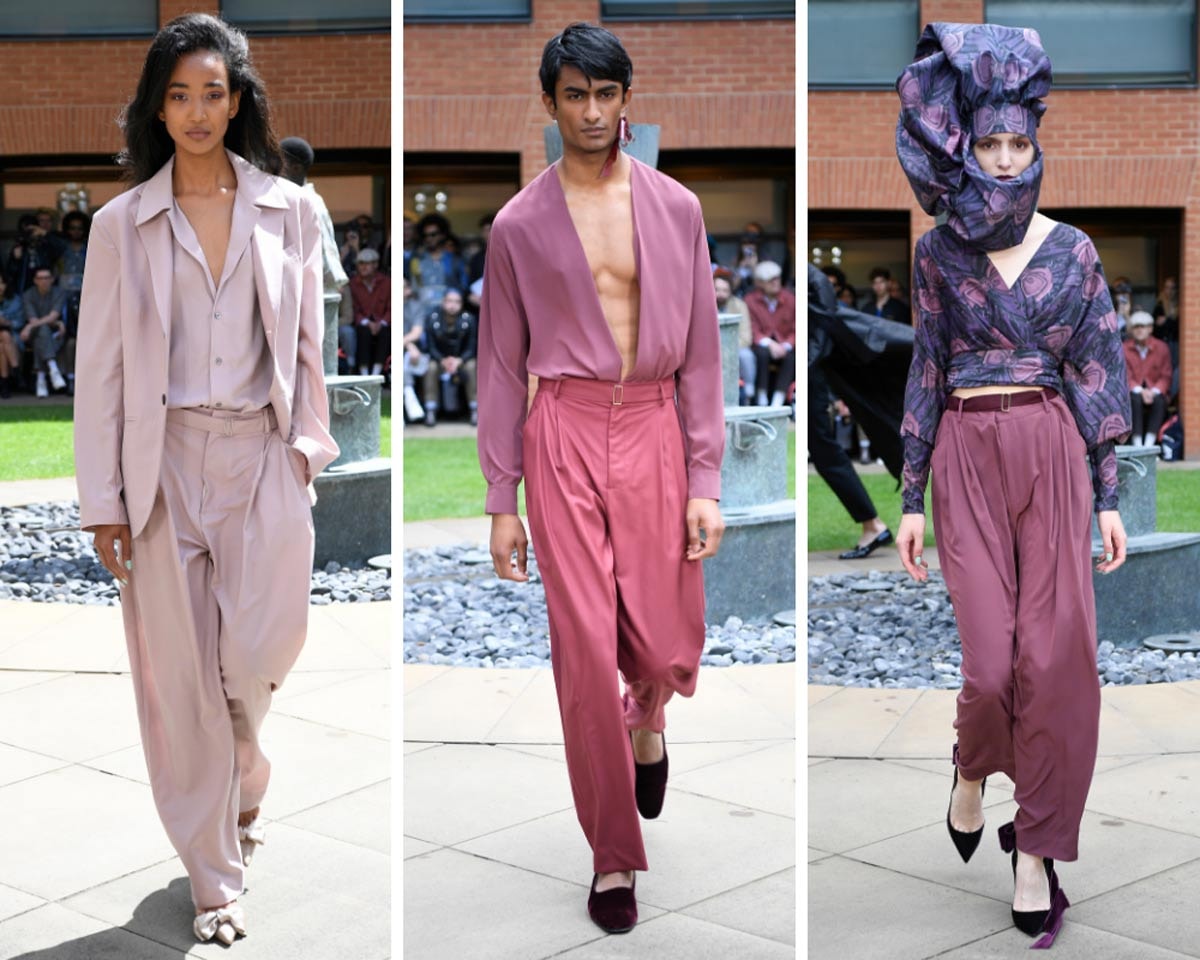 Edward Crutchley, who won two prizes for menswear and innovation at the 2019 edition of the International Woolmark Prize, explored “nostalgia without being nostalgic” with his 80s and 90s inspired ‘Dressy’ spring/summer 2020 co-ed collection.

Held in the courtyard of Haberdashers’ Hall, a procession of power suits in powder pink and blue with “sloppy oversized shoulders” and high waisted trousers with rounded hips led the way, followed by hand-painted illustrations of Carolina Parrots by the American ornithologist John James Audubon, which were reworked in a “frisky homage” across tailoring while Hawaiian shirts were seen splashed to the navel.

This was a sophisticated take on camp and old-school glamour with opulent jacquard Laura Ashley-style florals influenced by the vivid flora of eminent textile designer Anna Maria Garthwaite and eighties bows seen across drape front skirts, wrap dresses and boxy oversized shirts, while cigarette prints were showcased on silk ties, foulards and capes.

The collection also featured a number of collaborations including custom Christian Louboutin shoes with a smart patent loafer and a printed silk stiletto, while the Sunday best headpieces in silk taffeta and technical silk lurex jacquard were by Stephen Jones, adapted from a piece featured in his first collection shown in 1980.

SS20 is about contrast and conversation, with Crutchley expressing: “For me, it’s a story of shifting and conflicting volumes. Looking back, but thinking ahead. Elements of modesty counterbalanced with extravagance and sexiness.” 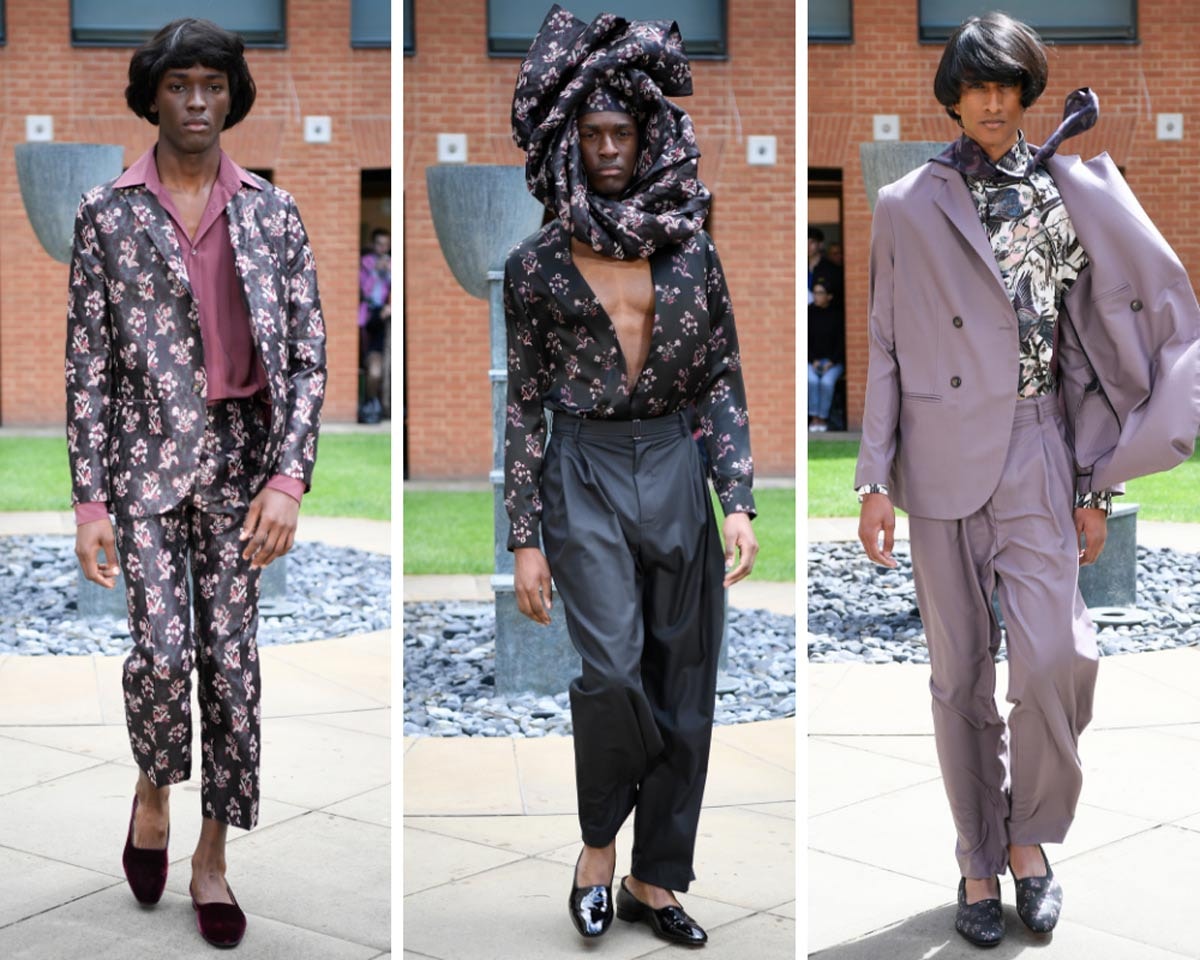 Craig Green, three-time winner of the British Designer of the Year Menswear accolade at The Fashion Awards, continues to be a big draw for LFWM with press and buyers queuing in the rain on Monday morning to see his latest collection inspired by self study in mirrors at the incredible underground The Vaults venue, which was lined with a mirrored catwalk to create the illusion that the models were floating.

There was a vibrancy to his SS20 collection, filled with colour from powder pink to vibrant yellow and orange tones, and he continued to feature his signature two piece workwear suits this time lightly-padded which he described as “quilted skin”, and there was a series of leather trousers, overalls, and long coats, with a utilitarian feel, and pinstripe suits that were reminiscent of pyjamas.

While “lantern men” wore fluorescent, laser-cut two-pieces and global cultural influences from Mexico, Turkey and the Middle East inspired the satin jackets and loose trousers with embroidery that had a skeleton-like quality to them.

For their first standalone show since Fashion East, designer Stefan Cooke and his partner Jake Burt were inspired by the Off-Broadway theatre scene in New York, where they spent earlier this year, and the idea of getting into costume, Americana and characterisation, as well as “finding common ground between the downtime dressing of drama students and the haphazard nature of the wardrobe department”. 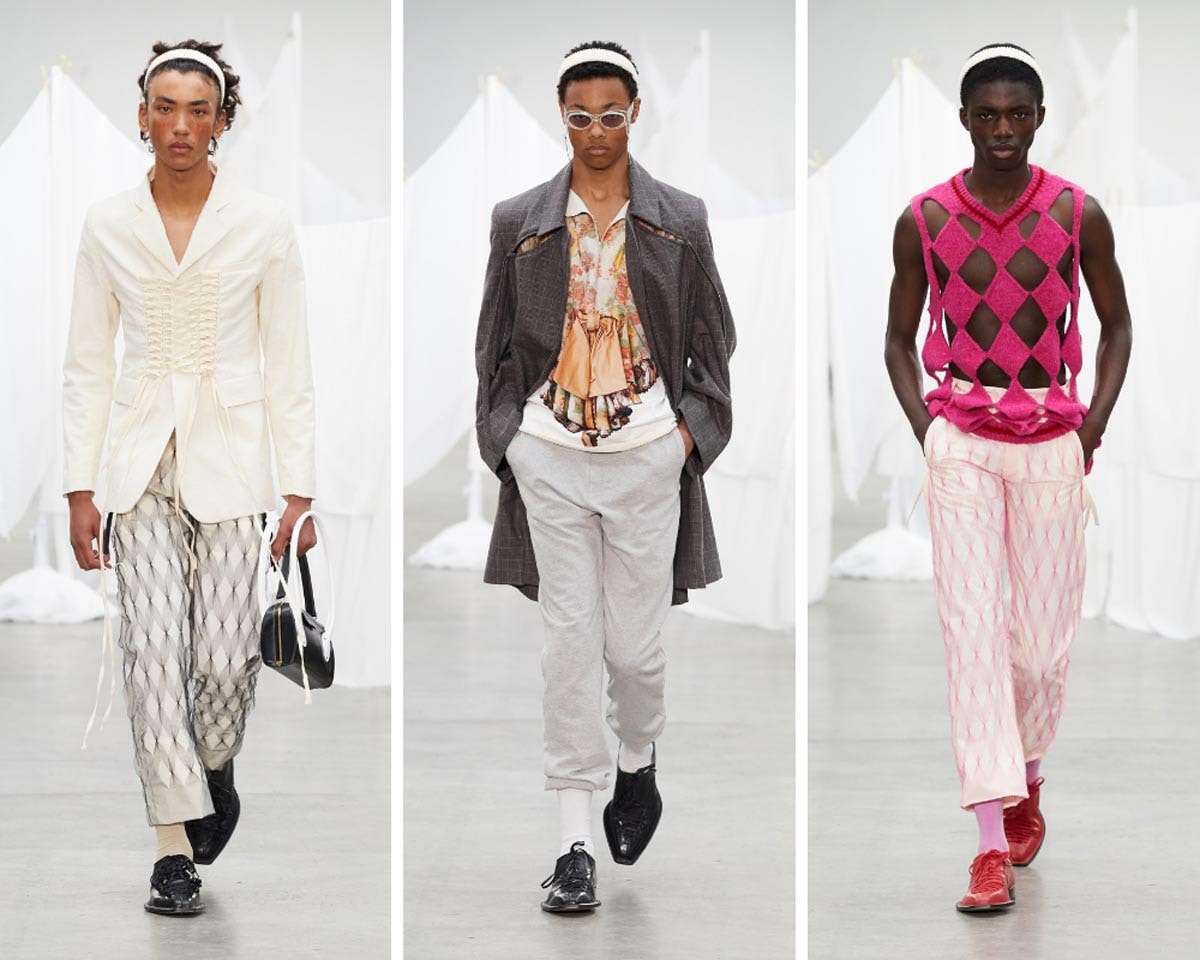 The NewGen recipients showcased theatre flourishes in new wearable ways, with corsetry detailing becoming the focus of a shirt and jacket, “holding down the lapels in a health and safety kind of way” added the brand in its show notes, while photographs of original costume pieces have been blown up and printed on jersey, the brands signature trompe l'oeil playing with the idea of impact.

Since the brands' launch in 2017, the importance of highlighting craft techniques has been integral, and for spring/summer 2020 they move into couture terrain with the use of tulle as a reference to conservation lace, while the knitwear continues the sliced and spliced story of last season with diamond formations.

Describing the collection, Stefan Cooke, who is a finalist for the LVMH Prize Award 2019, states: “There is a feeling of waiting in the wings - half in and half out of costume, dressed in part also for comfort.” 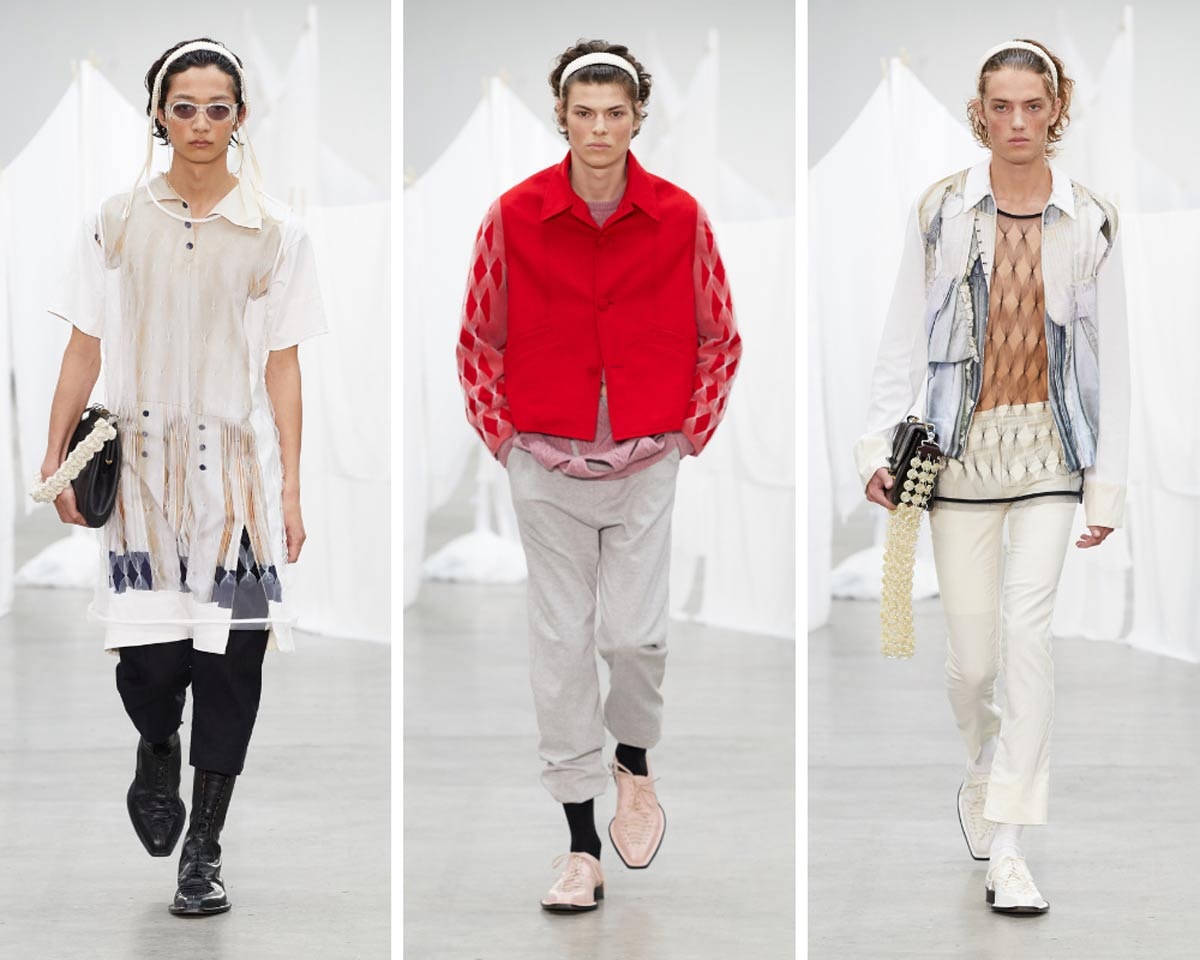 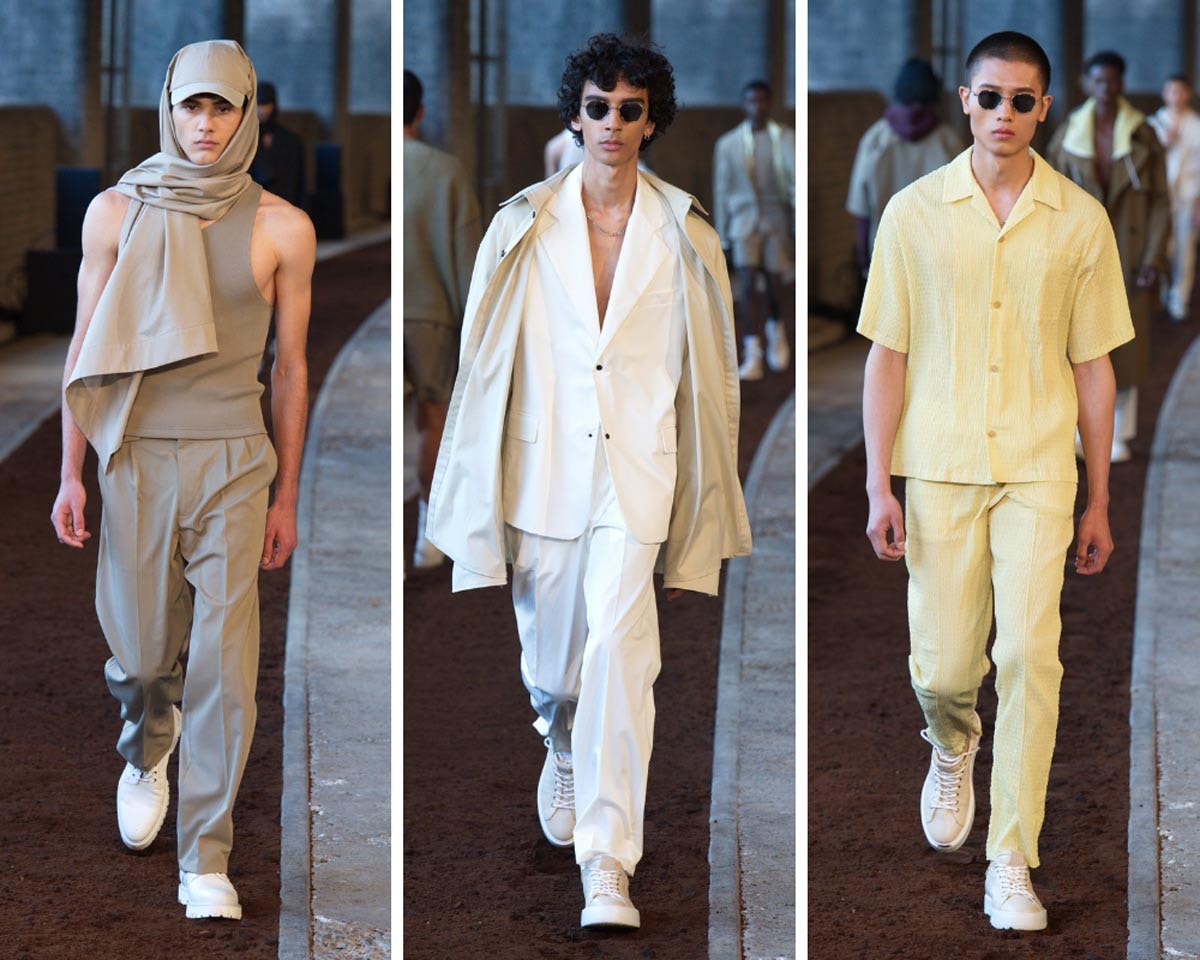 “Against a backdrop of ongoing political tensions in the Middle East - the collection is built around the idea of an urban nomad and a utopian future, imbued with a sense of lightness and positivity,” expressed the designer label in its show notes.

The sun-bleached colour palette inspired by the designer’s childhood in the United Arab Emirates was mainly whites, blacks, greys and nude hues, with the occasional pale yellow, pink and green tones adding a modern, summery hue to the mainly menswear streetwear collection.

Military influences are felt throughout in the fabrics, military canvas, heavy twills and ripstop, with the riveted garments, designed to mimic the nuts and bolts of armoured vehicles perfectly juxtaposed against the mesh, quilting and minimal tailoring. 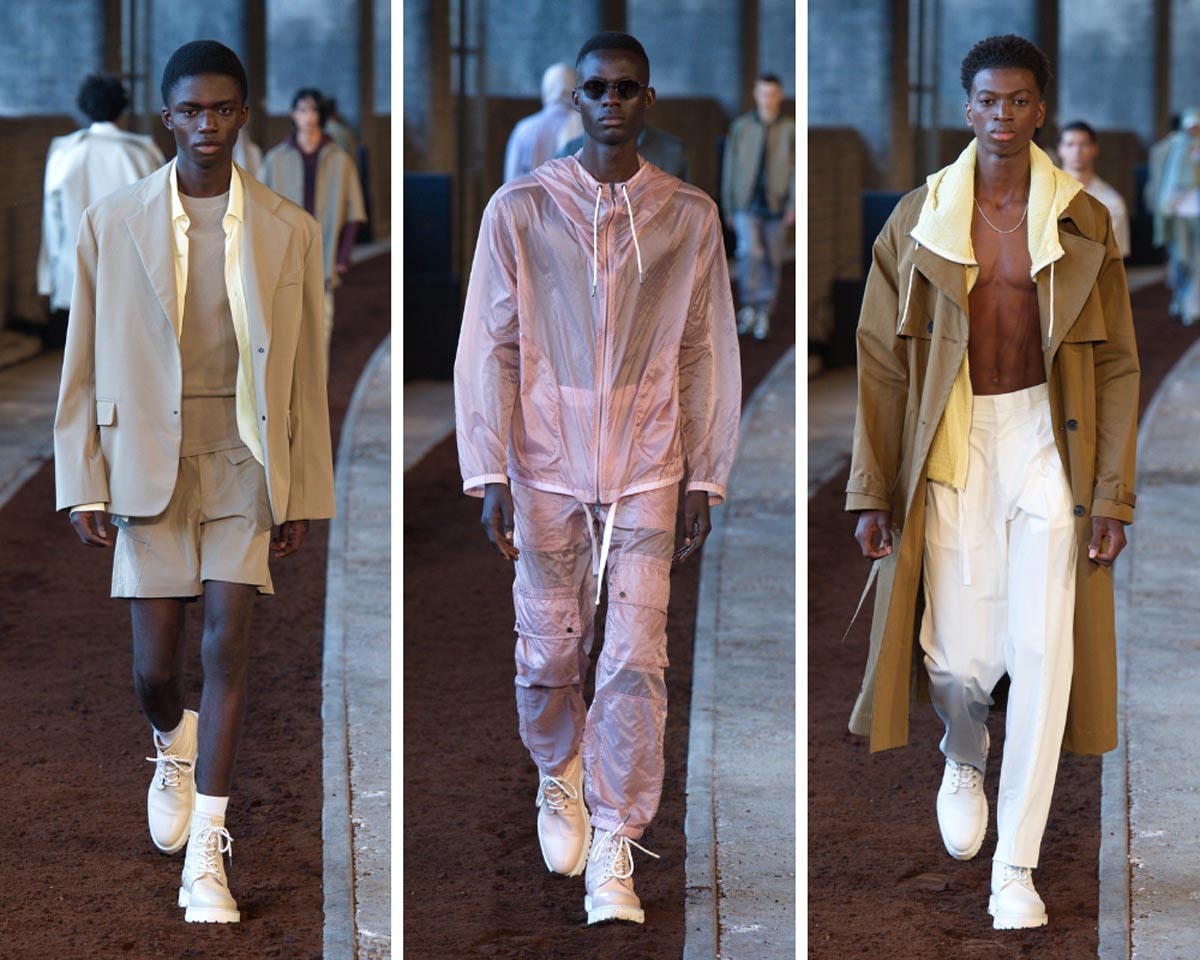 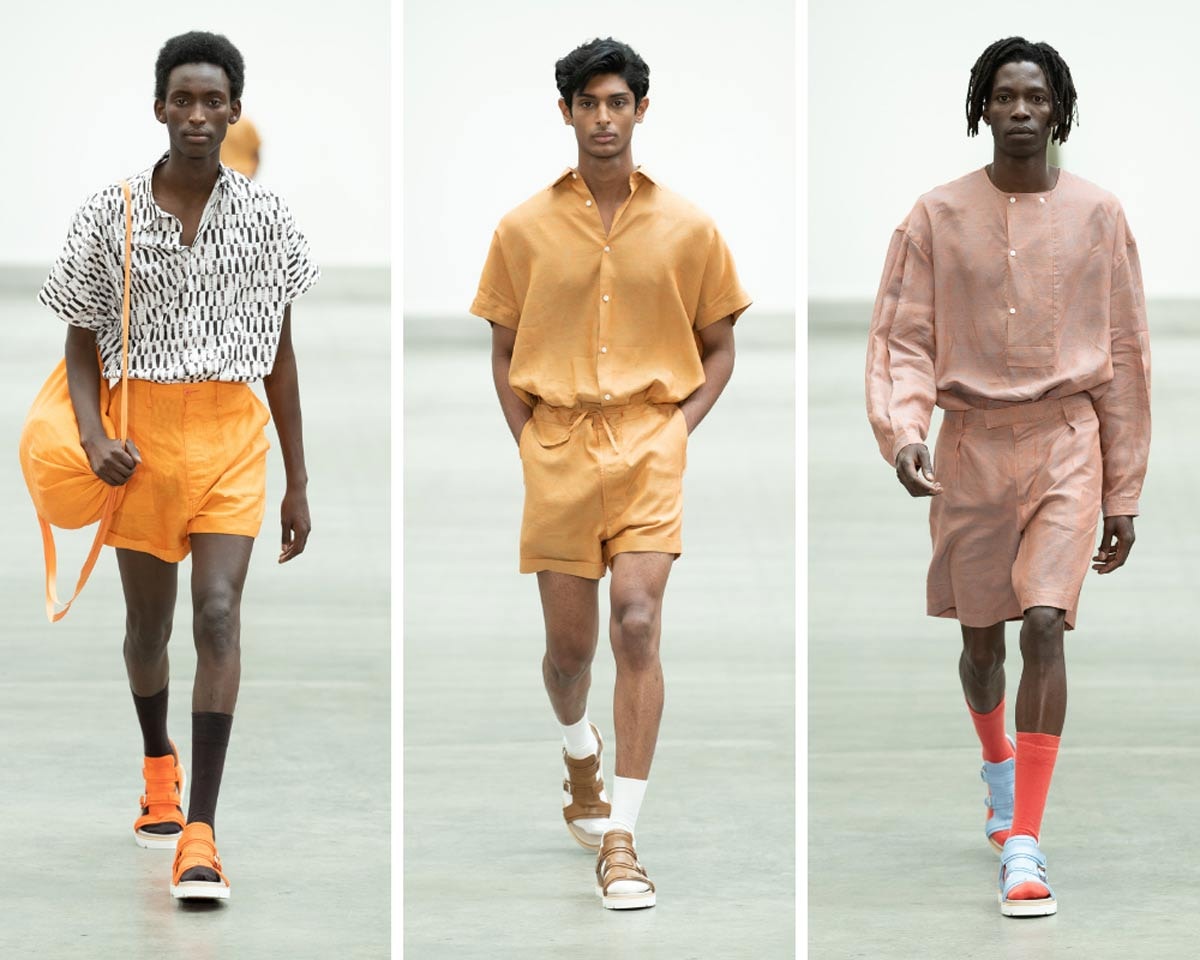 If there were three words to describe E.Tautz’s spring/summer 2020 collection it would be - juicy, fruity and floral, states the brand on the show notes.

“The sort of things Barry would wear to sing about the things he loves,” added the brand. “Things that look like the wallpaper and the upholstered sofas in the photos that Tish Murtha took.”

The summery collection features a strong and vibrant colour palette from the darker tones of cherry red and rust to dusky rose, kiwi, sky blue and what seemed like all the shades of orange, which worked beautifully on the loose fitted jersey and linen tailoring from short sleeve shirts to boxy shorts and single-breasted jackets.

The wallpaper, upholstered influence was seen across floral prints featured on cotton button-downs and cargo shorts, while oversized ’80s-style sweatshirts and drawstring bags gave a nod to the nostalgic aesthetic of designer Patrick Grant that marries tailoring with sporting and military undertones.

The brand, which is known for promoting British manufacturing and design, also stated that 70 percent of the spring/summer 2020 collection is made in its own factory, Cookson and Clegg in Blackburn, Lancashire. 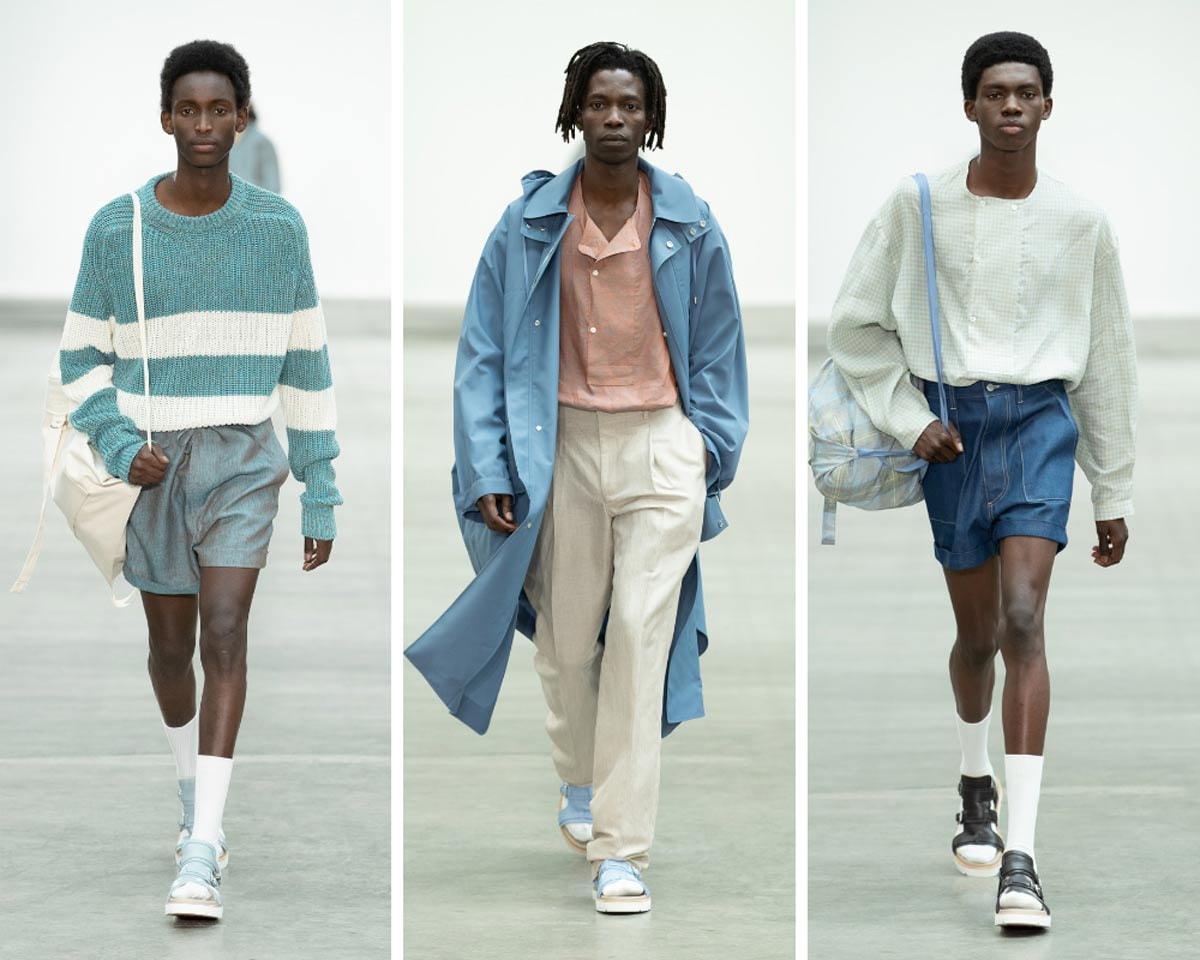