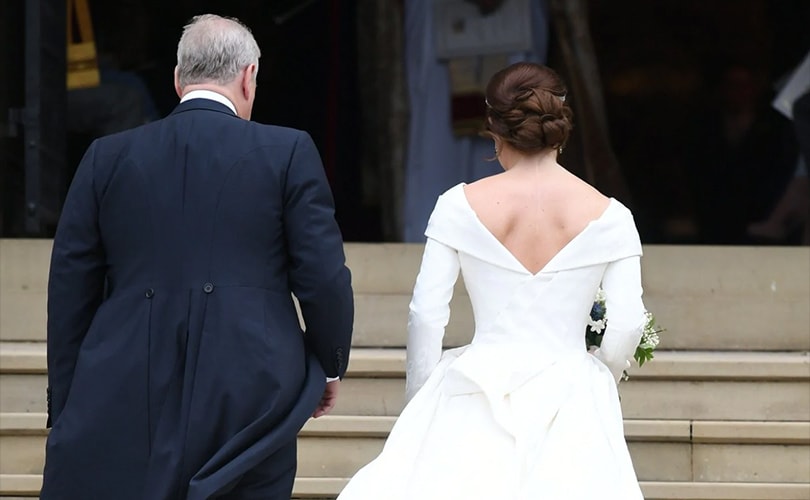 Royal fever has once again taken over Windsor for the wedding of Princess Eugenie to Jack Brooksbank and the bride arrived to the steps of St. George's Chapel in Windsor Castle, wearing a white wedding gown designed by Peter Pilotto and Christopher de Vos.

In a statement from the Royal Family, they expressed that Her Royal Highness chose to wear Peter Pilotto after being a fan of the brand for a number of years, having met the designers when she was co-hosting an event in support of women artists, and that she “worked closely” with the designers on her wedding gown.

The elegant white wedding gown has a neckline that folds around the shoulders to a low back that drapes into a flowing full length train, and is made from a special fabric designed by Pilotto and De Vos at their studios in East London that includes a number of symbols that are meaningful to Princess Eugenie as motifs, which were woven into a jacquard of silk, cotton and viscose blend. 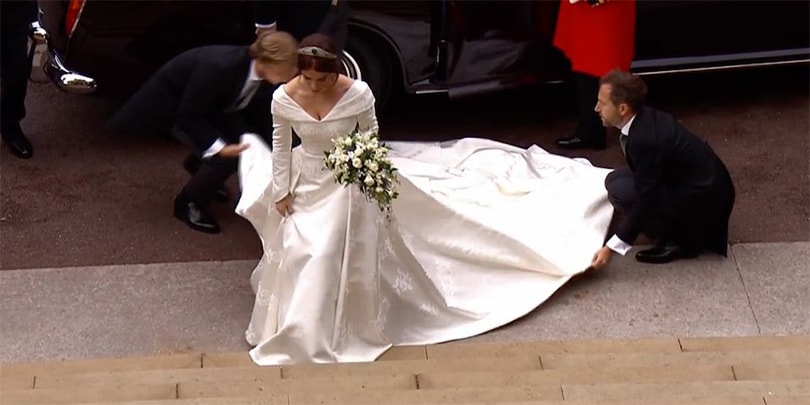 The motifs included a Thistle for Scotland acknowledging the couple's fondness for Balmoral, a Shamrock for Ireland as a nod to the Bride's Ferguson family, the York Rose and ivy representing the couple's home, which were all translated into a jacquard weaved in the Como region of Italy.

Additionally, the low back feature to the wedding dress was at the “specific request” of Princess Eugenie who wanted to highlight the scar she received during surgery she had aged 12 to correct scoliosis, which was further highlighted by the bride not wearing a veil, instead she opted for a dramatic train.

Princess Eugenie and her father His Royal Highness The Duke of York arrive at St George’s Chapel ready for her Royal Wedding. #RoyalWedding 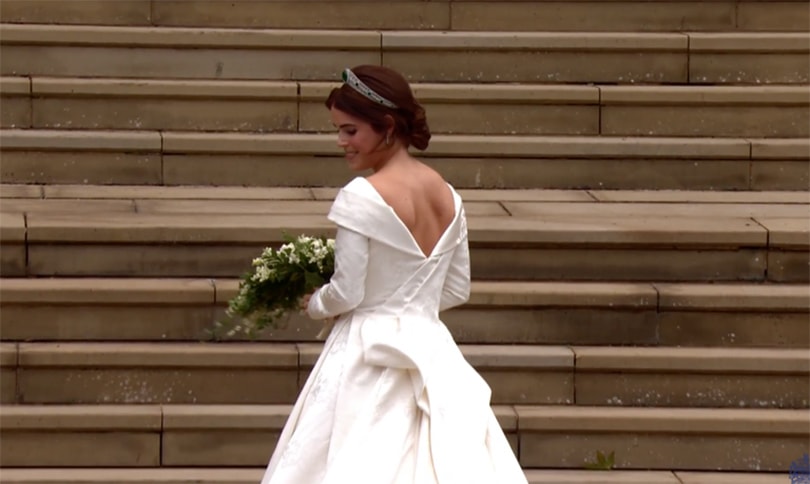 The design of the wedding gown came as a result of the designers undertaking “archive research into previous dresses worn by Members of the Royal Family”, according to the Palace, which led to the creation of the modern feminine silhouette, which was developed “layer by layer,” constructing it from the corset and the complex underskirt to the fitted bodice and full pleated skirt.

Finishing off her bridal look, Princess Eugenie wore the Greville Emerald Kokoshnik Tiara, her something borrowed from Her Majesty The Queen. The tiara made of brilliant and rose cut diamonds pavé set in platinum, with six emeralds on either side, was made by Boucheron for Mrs Greville in 1919 in the fashionable ‘kokoshnik’ style popularised in the Russian Imperial Court. 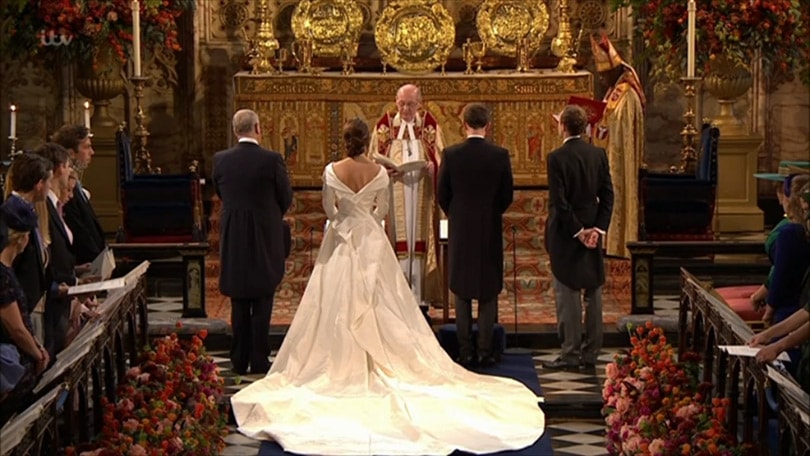 The bride’s sister, Princess Beatrice, the maid-of-honour wore a royal blue dress by Ralph and Russo, which she accessorised with a matching hairband-style hat by Sarah Cant.

The bridesmaids’ dresses and page boys’, which included Prince George and Princess Charlotte, wore outfits designed by Amaia Arrieta of Amaia Kids, which incorporates the Mark Bradford artwork included in the Order of Service.