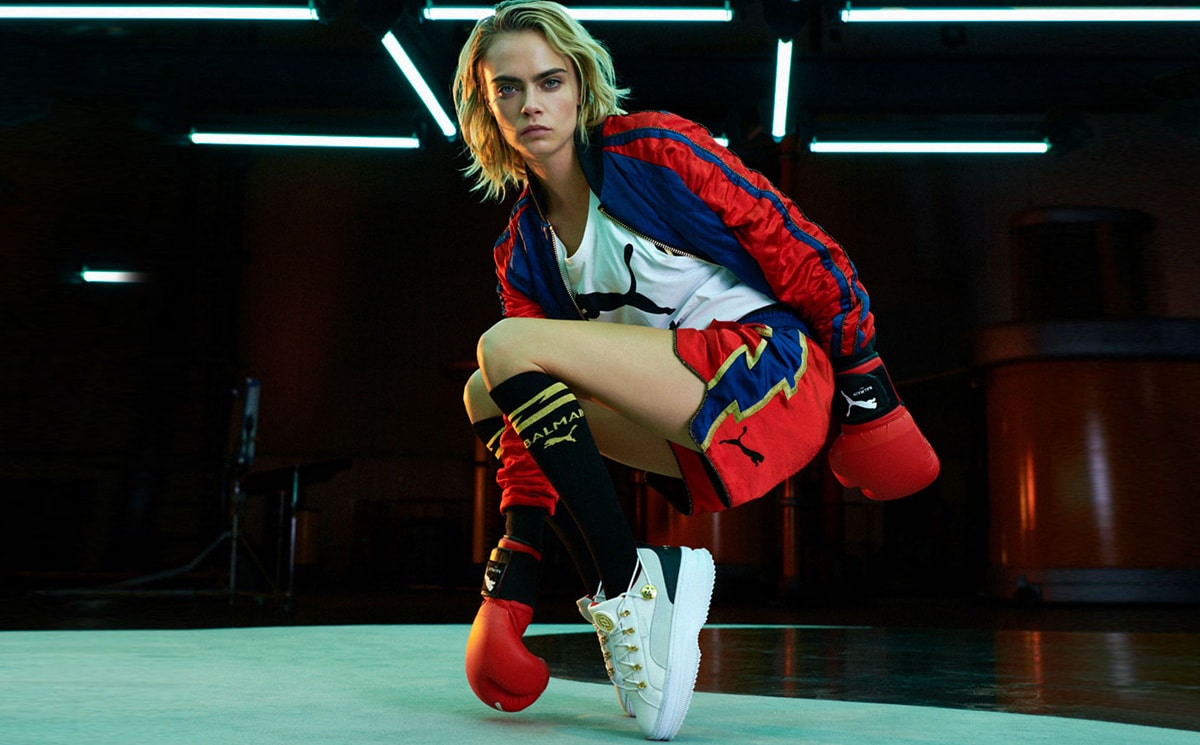 Puma x Balmain created with Cara Delevingne, which launches on 21 November, will come in the form of two limited-edition capsule collections designed by Balmain’s creative director Olivier Rousteing and Delevingne. The capsule also marks the first time Delevingne has designed a collection for Puma since she joined the brand in 2016.

The collections include pieces inspired by traditional boxing gear infused with Parisian couture and comprises bra tops, boxing shorts, and sneakers. It features a stark colour palette of reds, blacks and blues with touches of gold and other design elements straight out of Balmain’s atelier.

One of the two collections, made up of footwear, apparel and accessories, will be produced by Puma and stocked in the brand’s own stores and website, as well as at select independent retailers; a selection of these items will also be stocked in Balmain’s boutiques.

The second collection of six items, produced and distributed by Balmain, will be shown as part of the Parisian house’s Spring 2020 designs and will be carried at Balmain addresses worldwide and on its online store. Select retail partners will also carry items from the collection.

Commenting on the collaboration in a statement, Olivier Rousteing said: “Cara is a good friend, and this is the fruit of a shared vision. Everyone involved - Puma, Balmain, Cara and me - was determined to create something timeless. Above all, we knew that our message needed to be a strong one, reflecting exactly who we are and what we believe in.”

Bjoern Gulden, CEO of Puma, commented: “Working with one of our longest standing and iconic partners, Cara Delevingne, and marrying her vision with that of Balmain, such an iconic fashion label, was a huge achievement. To be able to mix Puma’s sport heritage with Balmain’s historic couture legacy really took this collection to the next level. We look forward to continuing a partnership with both Cara and Balmain in the future."

Delevingne added: “Puma has always represented teamwork and empowerment so the idea of doing a partnership with Olivier seemed very fitting. Balmain has a similar brave fierceness to their brand as Puma does and it really excited me to think of what we could all do together. I’m really proud of what this collaboration has resulted in.”

The collection is also accompanied by a boxing-inspired, interactive campaign starring Delevingne and shot by Brianna Capozzi with creative direction by Philippa Price.