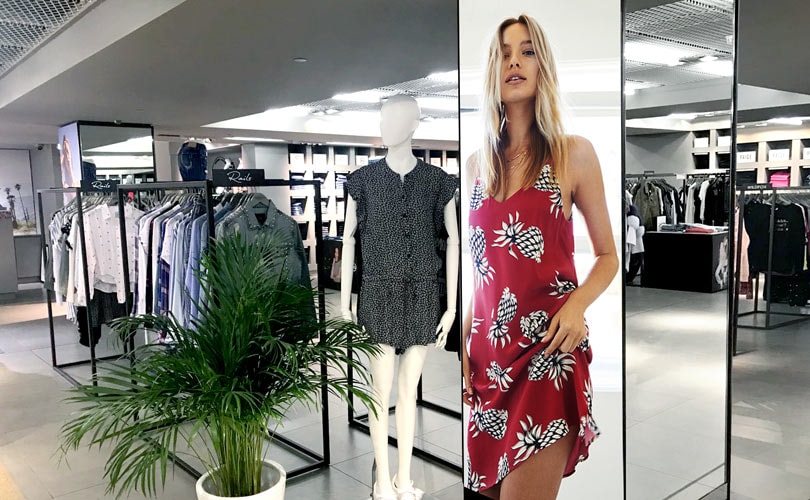 Rails, the Los Angeles-based contemporary fashion brand known for its super-soft shirts, is a brand on the rise. What started off with founder Jeff Abrams pitching a hat to retailers across America has become a global lifestyle brand not only for women, but men and children, and now the brand, which currently has more than 1,500 retailers worldwide in more than 50 countries is finalising plans to go it alone with its very own flagship stores in America as well as London.

“Most certainly in the US, in Los Angeles and New York,” Abrams tells FashionUnited during our exclusive interview with him in Harrods tea rooms. “Our goal is to have a store in Los Angeles by spring 2019 and also later that year in New York.”

Abrams added: “Then shortly after our first international market would probably be London as we have a really strong following there and great stores already, but it would be great to have our own place to showcase what we are doing, what’s happening with the brand, as it is challenging for an independent store to give collection display to a single brand but that would be the goal with our stores.” 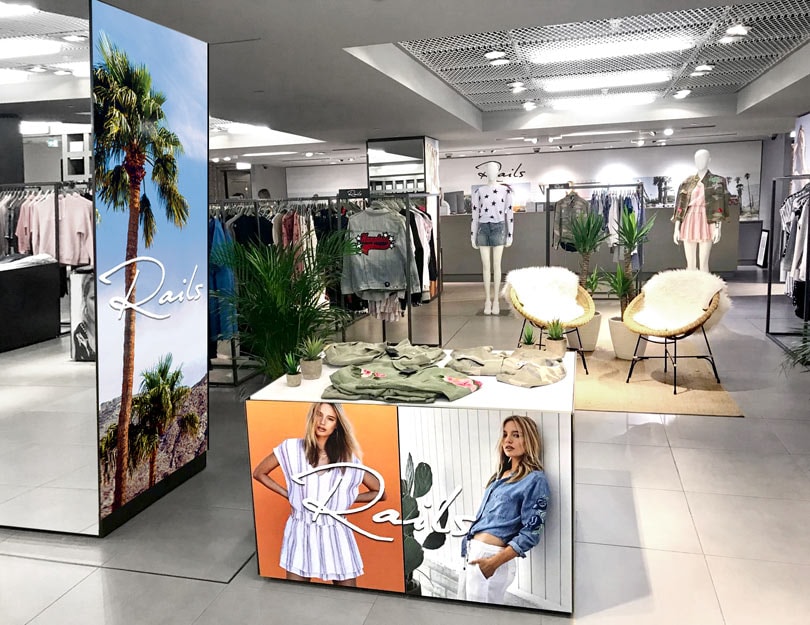 The idea is that a Rails store will be able to showcase all that the brand has to offer, from its expanding womenswear and menswear collections and even future categories like homeware.

“Similar to our recent Harrods pop-up, our flagships will allow our customers to go and see everything that is happening across all the collections and categories,” explains Abrams. “They will have our visuals, our full digital experience.”

In Los Angeles, the brand is currently “narrowing down” the location, with Abrams stating: “It will probably be a place somewhere like Abbot Kinney in Venice, which certainly has a very identifiable Californian vibe, a lot of foot traffic and is close to the water. Then in New York we would probably do somewhere around SoHo.”

For the hopeful London opening it isn’t as easy to navigate where to place the debut international Rails store, where getting the right location is so much harder to achieve.

“You want to be somewhere that’s cool and contemporary but still has foot traffic, where new customers are going to find you. If you go too cool maybe you don’t have the shoppers,” said Abrams. “We have a wide range of shoppers, the young affluent person who’s into contemporary fashion who pays attention to social media, then we have younger customers who look up to our brand as more aspirational to them, and then we have more mature customers who love the fabric and pay attention to what’s happening in the market. So, we have to really consider where the best place is for our core demo and I think that’s going to take a couple of trips to figure out where the right place to go is.”

Abrams added: “Like do we go East London which is obviously cool, but will we attract enough organic shoppers there or do you cross over to somewhere more central, where you don’t have the advanced fashion side but you have good foot traffic and you’ll get a lot of international shoppers. It’s about finding the right balance and the right size of store.” 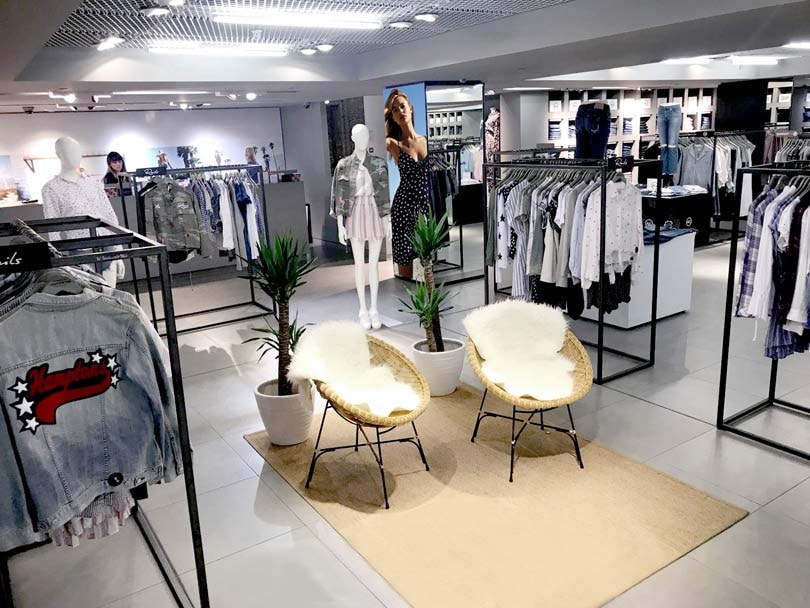 While Abrams couldn’t commit to a London location, it isn’t surprising that the UK is at the forefront of its international plans as the UK is one of Rails biggest European markets, with more than 65 stockists including Harrods, Harvey Nichols, Selfridges, John Lewis and a whole host of independent shops such as Trilogy and The Dressing Room.

The brand’s recent short pop-up in Harrods, which showcased the brand’s full spring 2018 collection for women, also showed that the UK audience wants to see more, with Abrams sharing with FashionUnited that the brand had “quadrupled” its weekly sales at the luxury department store through customers seeing more of what the Rails collection has to offer within the dedicated pop-up in Harrods Fashion Lab.

It’s the success of these shop-in-shops, not just here in Harrods, but also in the US in department stores such as Saks, Neiman Marcus, Nordstrom that has led Rails to plan its own flagships, as well as the expansion of the collections.

Rails looking to expand into accessories and homewares

Abrams is quick to note that shirting will always be at the core of the brand, it is the tencel-rayon blend, a cashmere super-soft fabric that put the brand on the fashion map, however, he exclaims that the goal has always been to build the brand into a full lifestyle collection.

“In the early days, we used to be really focused on plaid but even in shirting it has evolved into stripes and prints,” he added. “I want a woman to know she can get a head-to-toe outfit, that she can access pieces for her entire wardrobe if she wanted to, from top to bottom, dresses, outerwear.

“We are trying to do it in a thoughtful way, we aren’t looking to do everything at once as it gets a little confusing, usually each season we introduce something, like transitioning the fabrics of each category, so the customer knows that the super soft feel is definitively Rails. That is really the key component of everything we do.”

Rails aren’t just stopping at apparel for women, men, and children, with the creative director and founder discussing opportunities in accessories as well as homeware.

“Ultimately down the road we will see where things evolve, whether that’s into accessories or home, but that’s probably a few years down the road,” explains Abrams. “Maybe in two years we might have those categories but for now we are focusing on the core women’s collection and growing the men’s collection.”

The menswear line, which launched in 2014 alongside childrenswear collection ‘Little Rails’, is a growing area for the brand. While at the moment it is smaller than the womenswear collection it is already making waves, including launching in Harrods last year within the department store’s contemporary and denim departments.

Abrams said: “It’s one of our goals to really grow our menswear. We are taking a lot of the concepts like the tencel-rayon blend in the women’s and transition those into the men’s space, like that super soft feel.

“Guys are really loyal, when they find a brand that they like, they really stick with it. They don’t care about customisation as much as women, or social media and marketing, they care more about quality, value, versatility and durability and that’s what we are trying to do in the men’s space is to capture that loyal customer by giving them great fabrics and styles.” 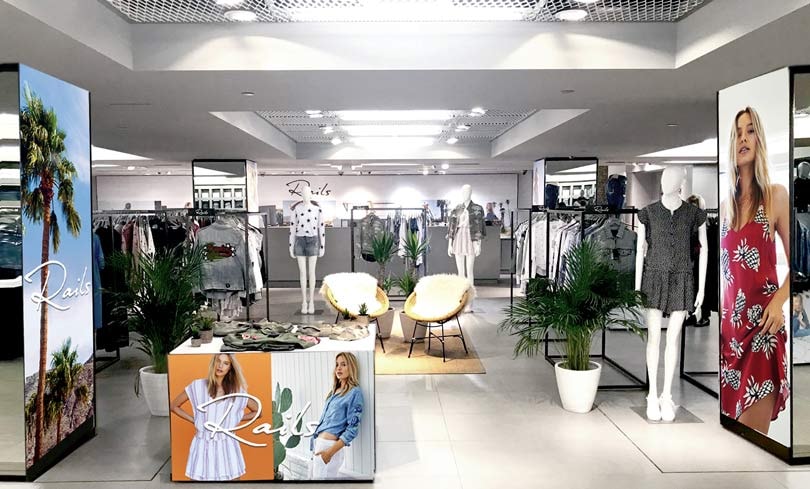 For the women, the idea of personalising key pieces with their name or initials has been a big growth area, not only in sales but also driving traffic towards its own e-commerce, and recognition across social media. What started with a denim jacket has now led to a full customised collection, including denim jackets in three washes, sweaters, shirts, night shirts and pyjamas, with personalised details ranging from full name patches to embroidery and Varsity-style initials.

The rise of customisation has been born from social media, states Abrams, as people have become “self promotional”. He added: “People are getting that jacket not only to wear it, but because they know it is going to make a great instagrammable picture, and all the customisation makes people feel that it has been made specially for them.”

“What we try to focus on is - product, because you can fool people with marketing, a lot of brands target a lot of people to wear their product, but at the end of the day if a customer doesn’t want to wear your product, they won’t buy from you again.”

Social media has also been important in other ways for Rails, the brand’s growth has been helped by celebrities such as Gisele Bundchen, Kendall Jenner, Cara Delevingne, and Margot Robbie, as well as influencers across the blogging community sharing their love of the brand across their social media channels.

Abrams states: “Influencers, especially in the celebrity space have been hugely important for us, but it has been very organic, a lot of celebrities have been showing up wearing our product because they genuinely love the product and they’ve acted very much like consumers where they’ve found it, loved it and shared it.

“We had Giselle wear one of our shirts at the Super Bowl the other year, she just wore it because she had in her closet and we have over a hundred thousand hits on our website trying to buy the shirt that she was wearing.”

It’s this “organic” relationships with influencers that Abrams added has helped the brand stay “authentic” within social media, which he stress is important as “doing a lot of promotional advertising with people doesn’t carry the same weight”.

He added: “Like every other brand, we need to be part of that social world because that’s how a lot of customers are getting their information, but we try to keep it as organic as possible.

“What we try to focus on is - product, because you can fool people with marketing, a lot of brands target a lot of people to wear their product, but at the end of the day if a customer doesn’t want to wear your product, they won’t buy from you again.

“You need to have loyal customers, so every season we evolve what we are doing. If they don’t love the product they are not going to come back. We focus on that and all the other things including marketing seems to fall into place, because influencers are just like customers they want to wear really good stuff.”

It’s that attention to detail that has also led Rails listening to demand from customers and stores regarding its sizing, with Abrams explaining that the lifestyle label is trying to be as “inclusive” as it can with the introduction of XL, 2XL and 2XS sizes to select womenswear styles such as its core shirts ‘Hunter’ and ‘Charlie’.

It hasn’t been an overnight success for charismatic Abrams, but with debut stores and category expansions on the horizon you can only imagine Rails becoming even more of a global success, however the entrepreneur doesn’t take it all lightly, ending our interview stating: “Building a global brand takes time to tell people your story.”

Also read: Jeff Abrams: ‘I have always thought about Rails as a global brand’

Images: courtesy of Rails from its recent pop-up in Harrods