Rainbows and retro pieces: Bailey bows out at Burberry

From classic check baseball caps to shell suits, Christopher Bailey raided the Burberry archive for his final collection at London Fashion Week on Saturday, while looking to the future with the rainbow flag.

Bailey bowed out after more than 17 years at the British fashion house with a collection drawing on street style and highlighting gay rights, lit only by spotlights in a dark, club-like venue. The once ubiquitous caps in Burberry's signature beige, black and red check pattern -- so popular in the 1990s that the brand began to suffer -- returned to the catwalk alongside 80's style shell suits made of silk. There were the classic trenches which Bailey has repeatedly reinvented as he turned Burberry into a luxury brand, as well as colourful knits layered under sheer t-shirt dresses, and maxi skirts worn with oversized hoodies and trainers. "I wanted it to be a reflection of Burberry's past, our present but also my great excitement to see what the future holds for Burberry," the 46-year-old said backstage.

Click through the slideshow to take a look at the last collection of the designer.

Bailey will formally step down on March 31 but will work with Burberry on the transition until the end of this year. His replacement has yet to be announced, but rumours put Phoebe Philo, who recently left Celine, in pole position. "The next person that has the privilege of coming into my shoes is incredibly lucky and I know they are going to do wonderful things and they will flourish," he said. A flash of rainbow colours ran through the collection, a reference to the internationally recognised gay pride flag which Bailey incorporated into the signature check or in bold designs. There was a rainbow cashmere turtleneck sweater, rainbow puffa jackets, and the show culminated with a gorgeous rainbow faux fur cape worn by model Cara Delevingne.

Bailey became the first openly gay head of a company on London's benchmark FTSE 100 index when in 2014 he was named chief executive, a job he combined for a time with his long-running position as creative director. He dedicated the final collection to LGBT groups around the world, saying before the show: "There has never been a more important time to say that in our diversity lies our strength and our creativity." Earlier, British designer Jonathan Anderson showed a playful collection to mark ten years of his J.W. Anderson label, that for the first time brought together men and women's clothes.

Fabric donut shapes grew out of sleeves at the wrist and arms, while the men wore key rings of toy donuts on their belts, marking what he described as naive optimism. He returned to a paisley pattern from his first collection for a blouse with layered soft ruffs at the neckline, while elsewhere there were loose dresses with dropped waists and fabric ties by the knees. "We've been going for 10 years, now we have to go forward in an optimistic way, to make it exciting again," said Anderson, who is also artistic director of luxury leather brand Loewe. (AFP) 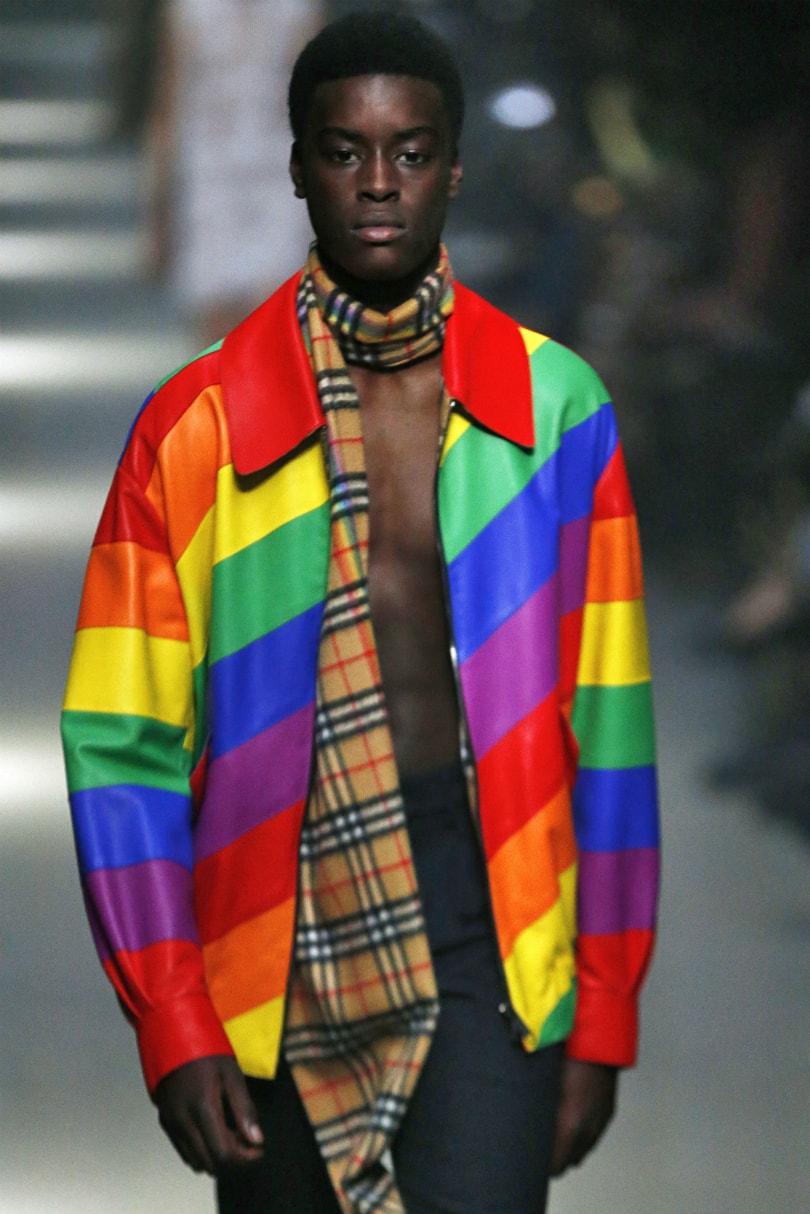