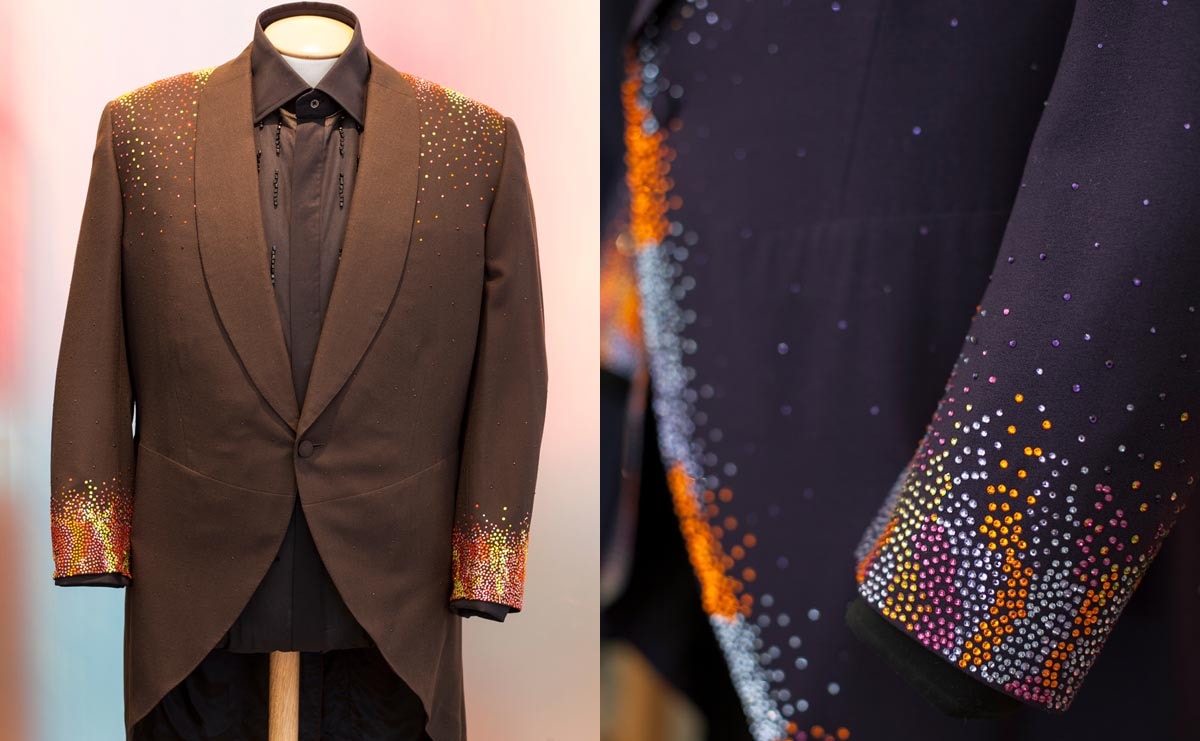 New York - In celebration of the new musical film "Rocketman", opening May 31 in the United States, contemporary Savile Row tailor Richard James and Swarovski have co-curated in-store displays in both London and New York complete with original outfits from Elton John’s storied career.

Elton John has been a longtime friend of the Richard James brand, and gave access to his personal archive to facilitate the loan of a few key Richard James outfits including his “Dot” suits and a crystal tailcoat worn during his Las Vegas residency. These showcase Richard James’s top notch craftsmanship injected with Elton John’s personal flare.

Highlights in the display include bespoke Swarovski-crystal trimmed tailcoats that were part of Elton John’s glittering wardrobe for his “The Million Dollar Piano” residency at Caesar’s Palace in Las Vegas, which ran from 2011 to 2019. In addition, the ‘Dot’ collection is featured, comprising matching 2-piece suits and shirts, including the pink/yellow dots look from his 2001 Grammy Awards performance with rapper Eminem and the ‘Got Milk” advertisements by the American dairy industry the same year.

These looks are currently on display at the Richard James Park Avenue store and will be until June 7. To celebrate the display, Richard James has created a limited run of 8 T-shirts, all featuring a Swarovski crystal rocket emblem. The T-shirts will retail at 260 dollars and will be available in-store and online.

“We are thrilled to co-curate this inspirational fashion showcase, which celebrates our long history of collaboration with Elton John and our partnership with costume designer Julian Day on the costumes for Rocketman,” said Nadja Swarovski, member of the Swarovski executive board, in a statement. “Our crystals have been adding signature sparkle to Elton John’s wardrobe for decades, and it is a pleasure to see them shining in Richard James’s fine Savile Row setting.”

“I remember the time I met Richard,” Elton John said in a statement. “I’d popped into the Joseph men’s shop and was bowled over the by the most striking sunflower ties. I flipped them over to see the eponymous label: ‘Richard James Savile Row.’ Savile Row?! I hadn’t seen anything this fresh in years. Naturally, I got the address and headed there immediately.”

“Elton John has great individual style and he’s never been afraid to express himself, so he represents a lot of what Richard James is all about,” said Sean Dixon, founder and making director of Richard James, in a statement. “He’s been an incredibly supportive friend and a customer since we opened our first store in 1992 and Richard James wouldn’t be what it is today without him. As I hope this small tribute demonstrates, it’s always an honor and pleasure to dress him.”