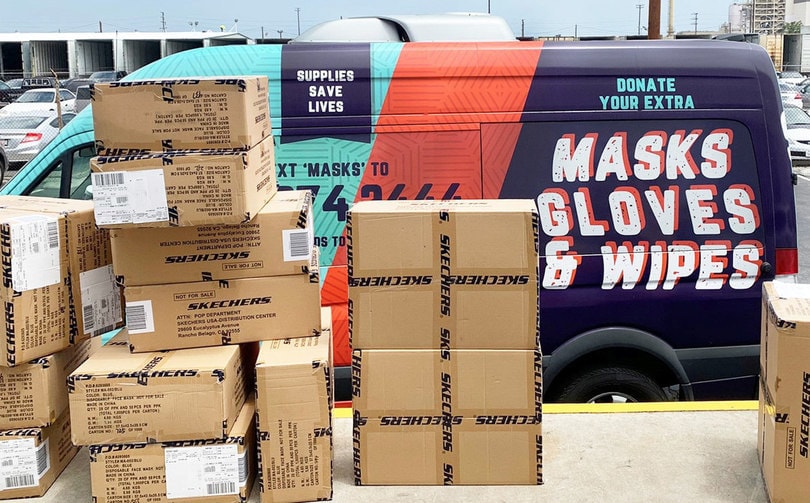 In partnership with various charitable organizations, the Californian shoe retailer Skechers USA Inc. plans to distribute a total of one million face masks to those in need in the USA. For example, the United Way of Greater Los Angeles organization ensures that some of the masks donated by Skechers have been distributed to health care workers and the homeless in Los Angeles.

The masks, which are non-medical, three-layer surgical masks, are donated to nonprofit organizations that typically do not receive personal protective equipment from government institutions, with an emphasis on those in financial distress. These include community and public education centers, health and rehabilitation facilities, as well as homeless shelters and food outlets in greater Los Angeles, Chicago, New York City, Detroit and several cities in Florida and New Jersey.

The donation is the culmination of Skechers' TikTok challenge, which involved dancing to YouTuber DripReport's song “ Skechers ” , filming yourself and uploading the video to TikTok using the hashtag #danceformasks or #MillionMaskChallenge. Skechers promised to donate 10 masks for each dance video. Since the challenge began in late May 2020, the song has been downloaded over a billion times, allowing the shoe retailer to reach its target of one million masks with ease.

“We watched TikTok become a driving force that kept so many people connected during this difficult time. After the viral success of DripReports 'Skechers' on the platform, I knew we had to turn the momentum into a give-back - one where the fans end up giving something back by just dancing. This is a wonderful thing and we look forward to working with United Way and all of our partners to donate a million masks as we want to make a difference together, " commented Skechers CEO Robert Greenberg in a recent press release.

“ Two things flourished during the pandemic: creativity and caring. It's heartwarming to see fans from all over the world express themselves to help raise awareness alongside the charitable efforts of a local company with global reach like Skechers. As the number of cases grows in the greater Los Angeles area, United Way is proud to partner with Skechers to donate masks to help protect frontline workers and the most vulnerable in our community,” added Elise Bulk, United CEO Way of Greater Los Angeles.

The #MillionMaskChallenge had the support of influential TikTokers such as Addison Rae, Loren Gray, Spencer X, Maiko, Avani and the Croes Brothers, who together have more than 350 million followers. They asked their fans to support the campaign and upload dance videos of themselves to the Skechers song to support the mask donation.

YouTuber DripReport became known practically overnight with his debut single and only worked with Arista Records on the official release of his first own song at the beginning of the year. “ From the beginning, I wanted to turn this moment into movement. Part of my goal with the track was to show that anything you wear can be made cool and to convey a message about confidence as opposed to material things. When I released 'Skechers' in January, the world was very different. Now that the title has become so popular, I am extremely pleased that Skechers and I have made it stand for so much more, ” explained Drip Report.