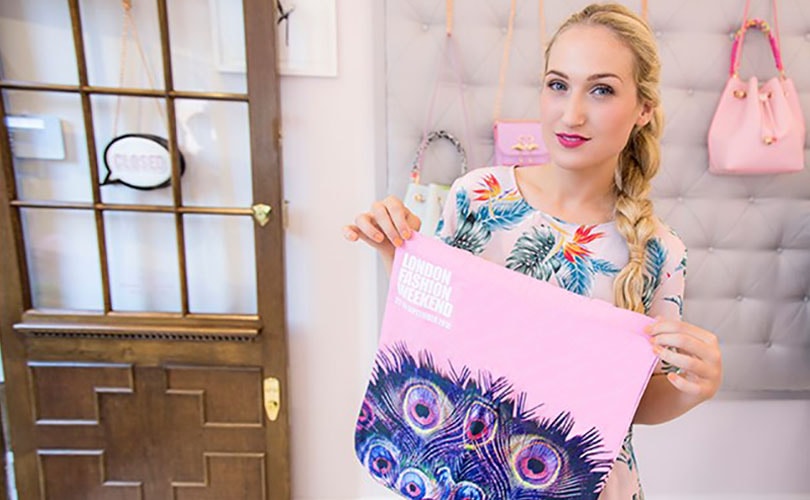 Luxury footwear and accessories designer Sophia Webster has been commissioned by the British Fashion Council to design this season's London Fashion Weekend tote bag, the foun day consumer based event running from September 22 to 26.

Webster, who was crowned the winner of the BFC/Vogue Designer Fashion Fund this year, is said to have drawn inspiration from tropical bird feathers for the artwork used on the limited edition bag. "I am delighted to be partnering with the British Fashion Council for London Fashion Weekend this season," said Webster in a statement. "I can’t wait to unveil the tote in September!"

The finished design, which features a peacock feature motif on a bright pink background, is based on one of Webster's signature prints from her spring/summer 2017 collection, which will be presented during London Fashion Week this September. Webster will also participate in the event's debut industry talk, together with fellow designers French Sole, Linda Farrow, Lucy C hoi and Preen by Thornton Bregazzi.

"Sophia’s beautiful designs perfectly capture British creativity and are the perfect match for London Fashion Weekend," added said Caroline Rush, chief executive officer of the British Fashion Council. "It has been great to work with Sophia on the tote bags for this season and I look forward to seeing them being used all over London and further afield!" The tote bags will be given to consumers who purchase Silver, Gold and Luxe ticket packages for the event.

The announcement comes not long after Webster launched her debut full range of handbags, which celebrate the fun and surreal artistic aesthetic the London Fashion Week designer is known for.