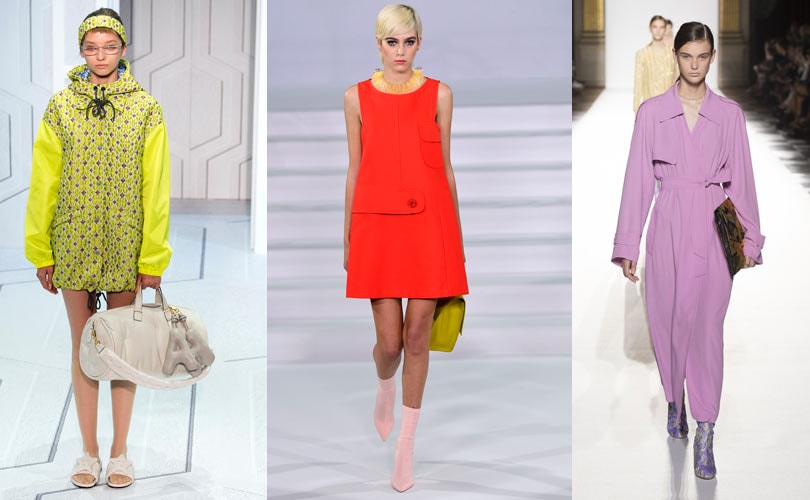 Spotted on the Catwalk: Key Fashion Colours for SS/18

London - Now that 2018 has officially begun, the new fashion season is imminent. Although it may still feel a lot like winter in most of the Western Hemisphere, the start of the Spring/Summer 2018 season is just around the corner, which means its time for a splash of colour. But which colours will lead the way for Spring 2018? The Pantone Colour Institute created a shortlist of colours set to pop in spring 2018, based on the colour palettes spotted on the catwalks during London Fashion Week and New York Fashion Week. These trend colours are said to be fun and playful, as more designers choose shades that are not typical for spring and experiment with new colour combinations. 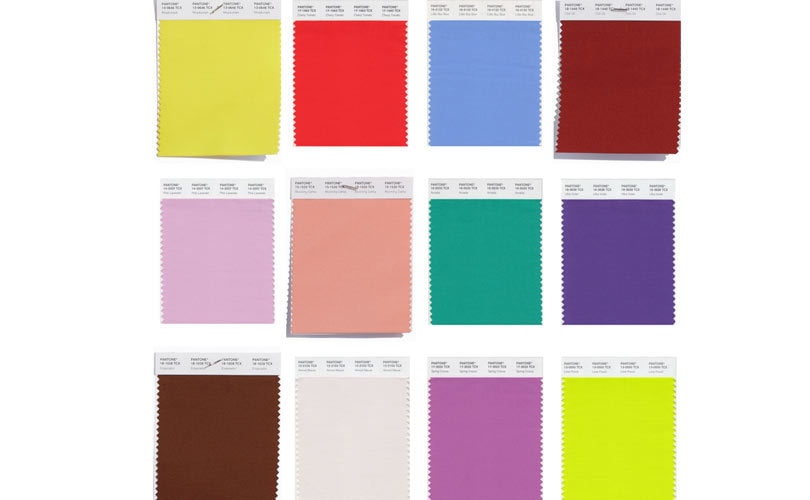 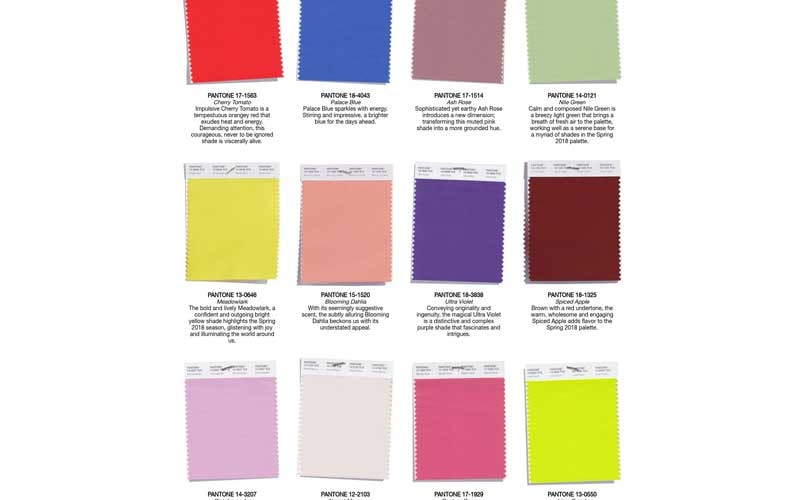 FashionUnited shares its selection of 10 upcoming trend colours for Spring/Summer 2018 with you below, ranging from Prince-Purple to Lime-Yellow.

‘With the expectation of the clear blue sky, Little Boy Blue is no longer for little boys only,’ reads Pantone description of the colour. “Suggestive of expansiveness and continuity, this azure blue shade reassures us with its promise of a new day.” This blue shade was spotted in Carven and Chanel’s collection for SS 2018. Luxury fashion house Balenciaga also showed a leather jacket featuring 1980s shoulder pads in the azure hue, which was paired with orange boot-leggings an oversized shopper bag, a unique colour combination. 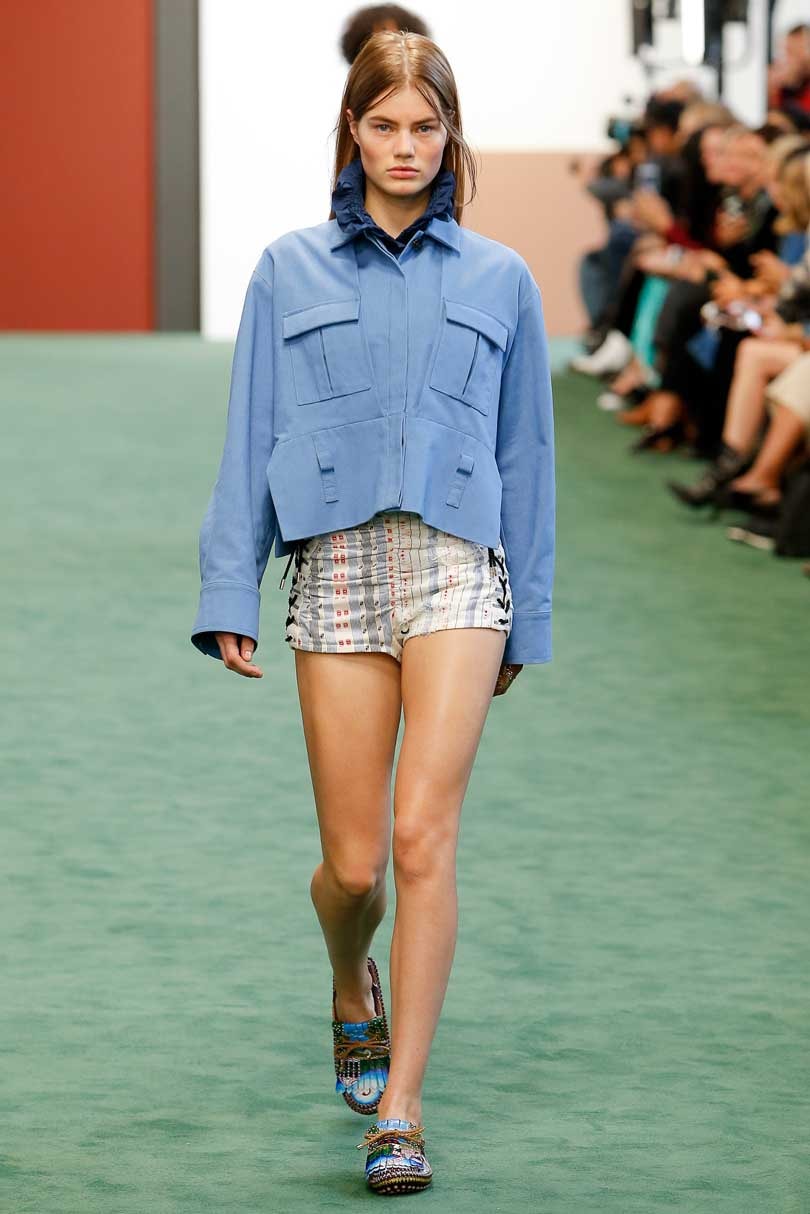 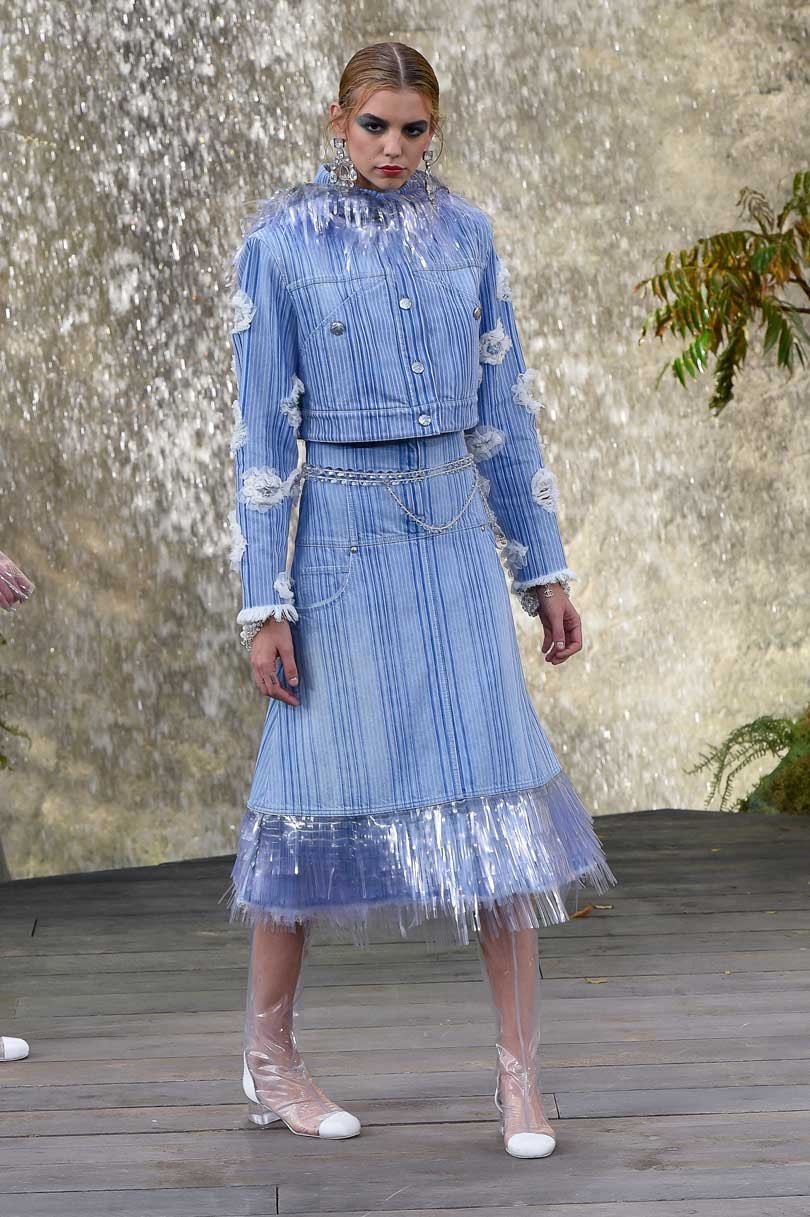 Pantone selected two yellow shades as leading trend colours for Spring/Summer 2018, highlighting the bright shades growing popularity. The colour Meadowlark is lively and catches the eye and was seen on the catwalk at Tibi and Balenciaga. The luxury fashion house not only used the hue in its garments but also for its much-discussed footwear range with included Crocs with a platform sole. 'Classic' yellow was also spotted in the collections of Ports 1961, Chalayan, Paul Costelloe and Phillip Lim. German designer label Jil Sander and Italian fashion house Versace also used Meadowlark-yellow in their fall collections 2017/18. 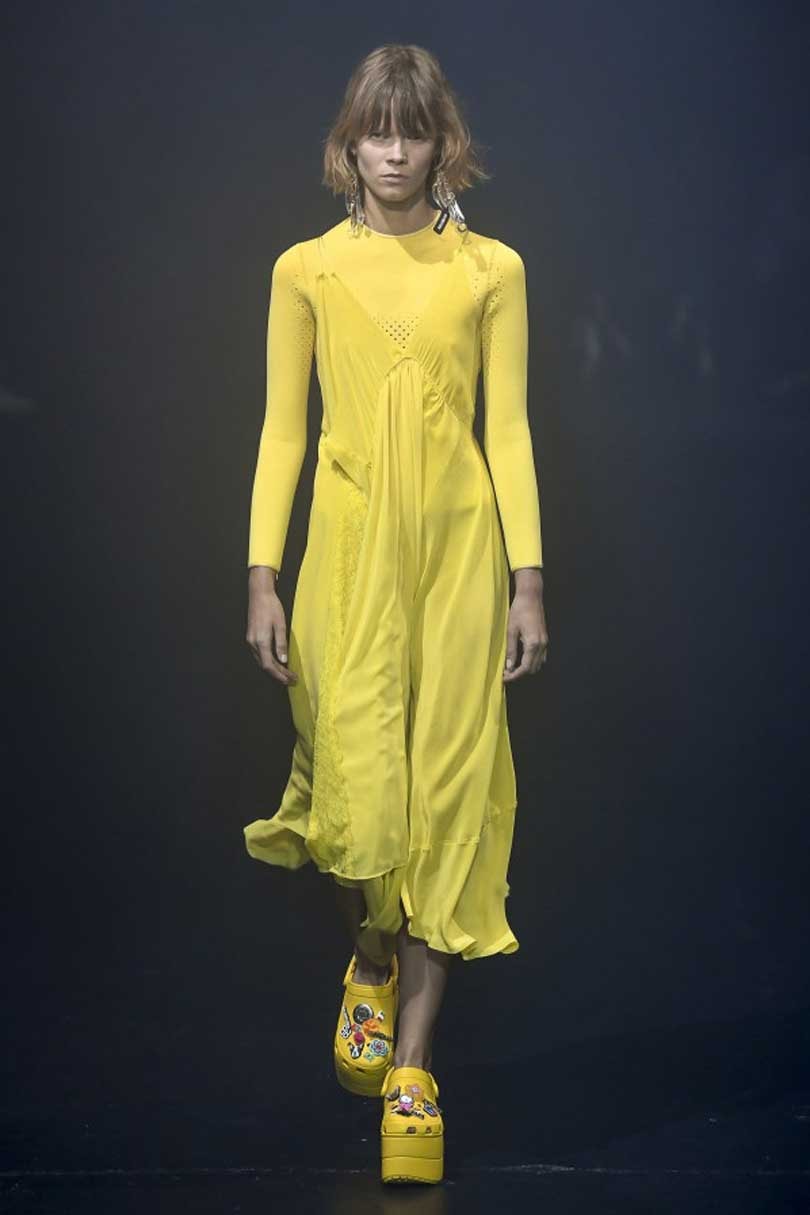 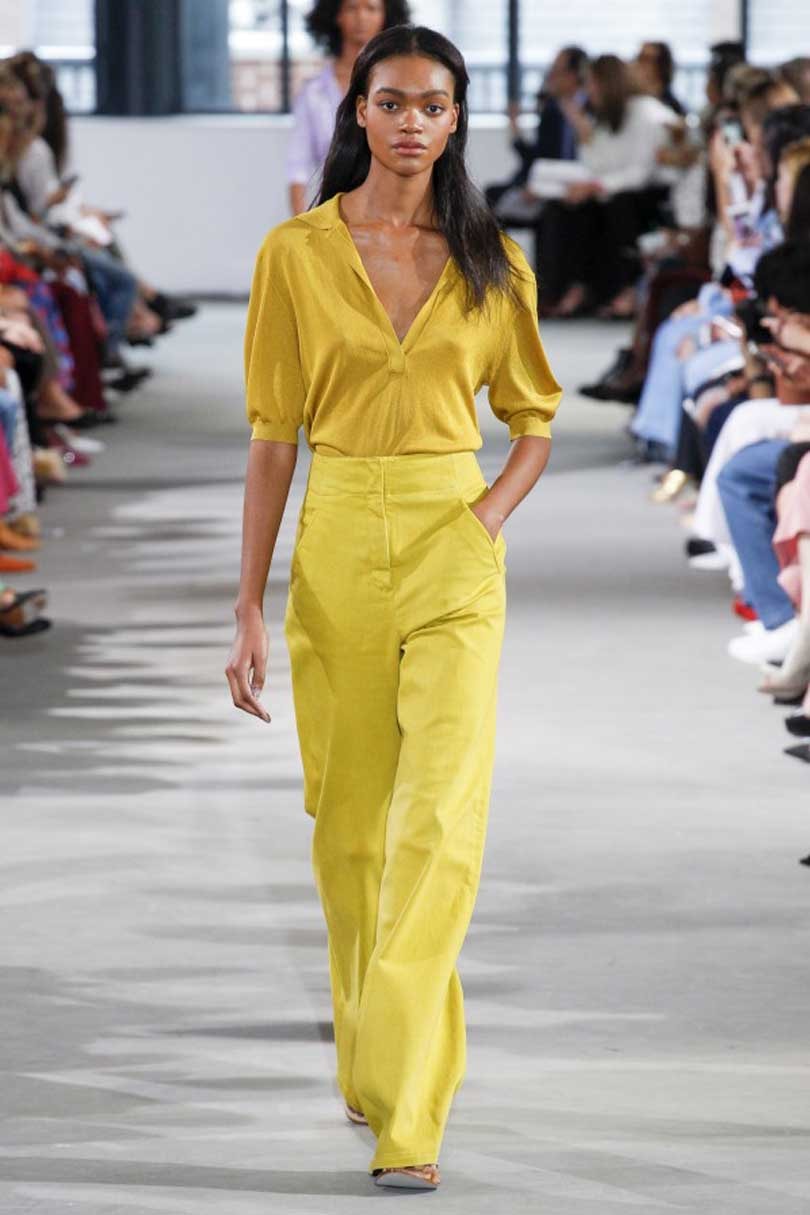 Pink Lavender is ‘a soft and romantic violet rose that charms with its soothing sense of quiescence,’ according to Pantone’s description. Dries van Noten incorporated this hue on a classic trench coat in his Spring/Summer 2018 collection. Versace also used the colour in its collection, pairing a light shade of the colour with slightly darker trousers. Valentino featured the colour in it's Autumn/Winter 2017 collection as well, which features a number of pink cloaks and high-neckline evening gowns. 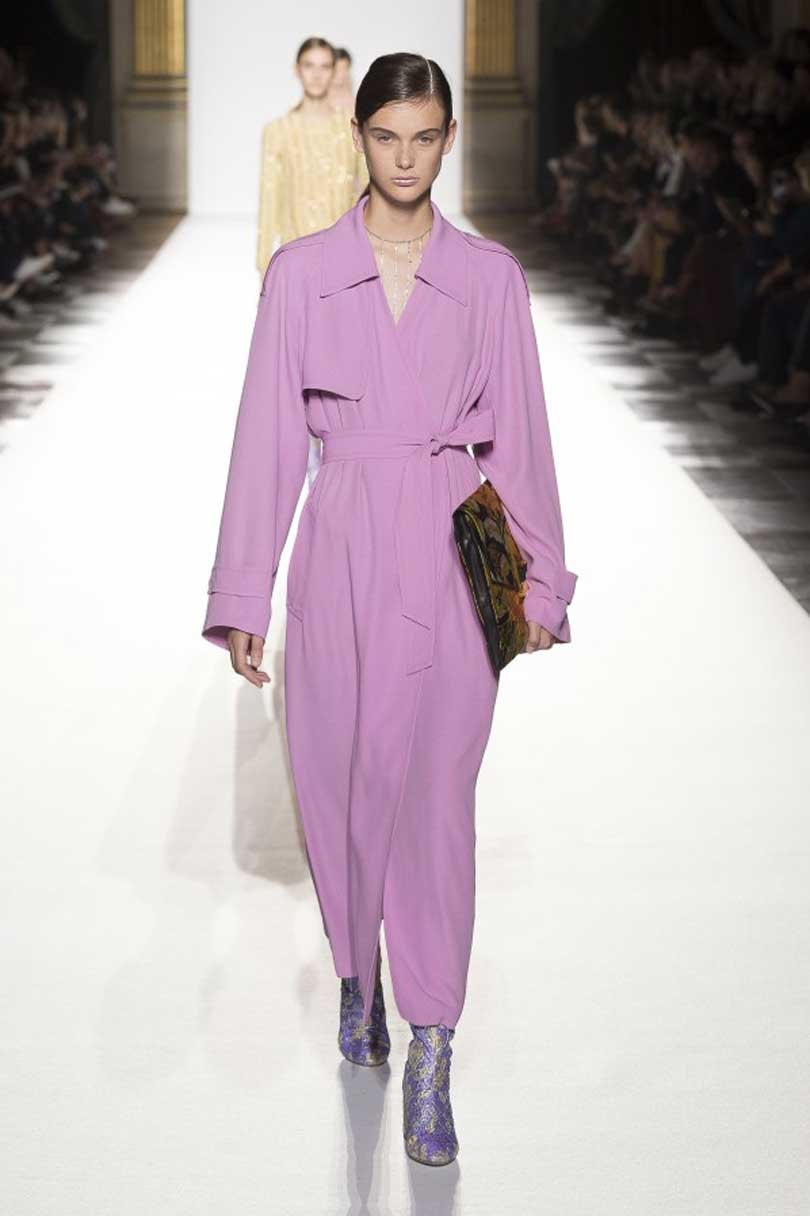 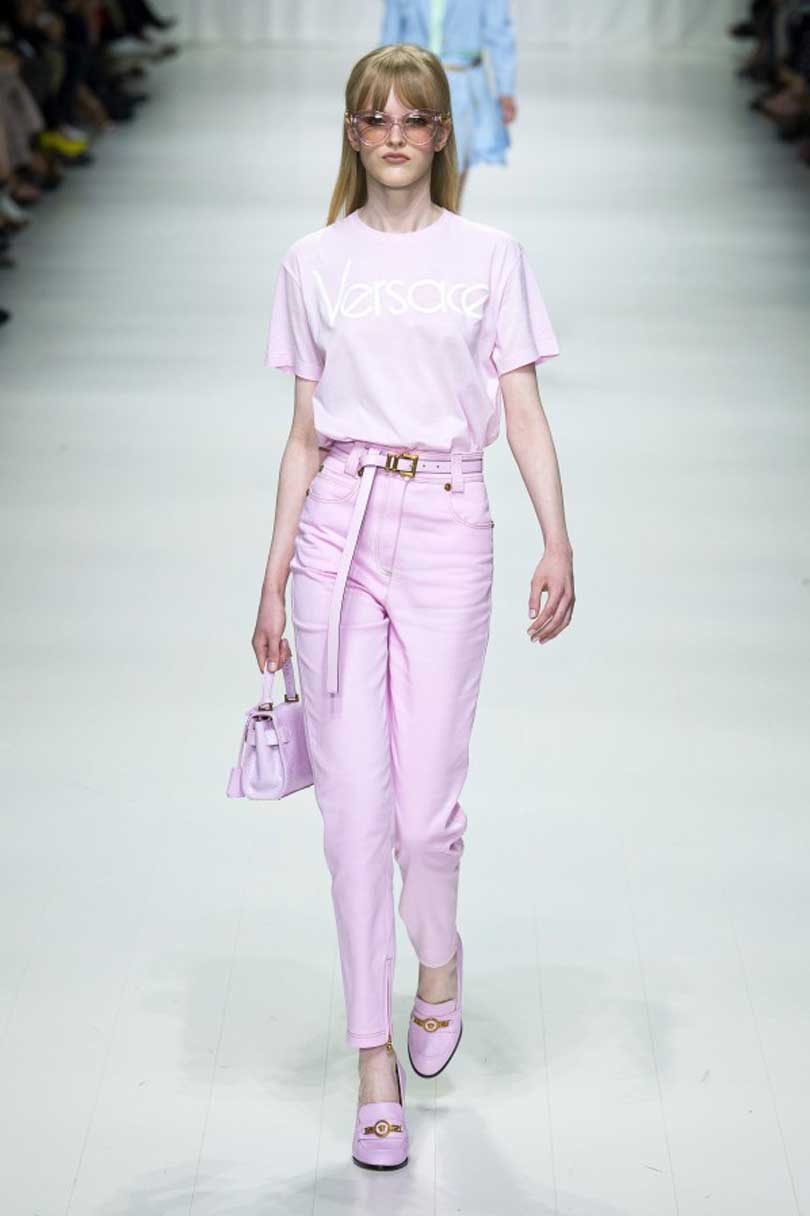 ‘Impulsive Cherry Tomato is a tempestuous orangey red that exudes heat and energy,’ writes Pantone on this fiery red. ‘Demanding attention, this courageous, never to be ignored shade is viscerally alive.’ Victoria Beckham, Antonio Berardi, Christopher Kane and Paul Costelloe all chose to feature this bold statement colour in their collections for Spring/Summer 2018 and did not shy away for showing complete dresses in this colour. Dries van Noten presented a complete head-to-toe look in Cherry Tomato in the form of an oversize suit for his 100th show for Autumn/Winter 2017. Jil Sander and Max Mara also ventured into red statement ensembles. 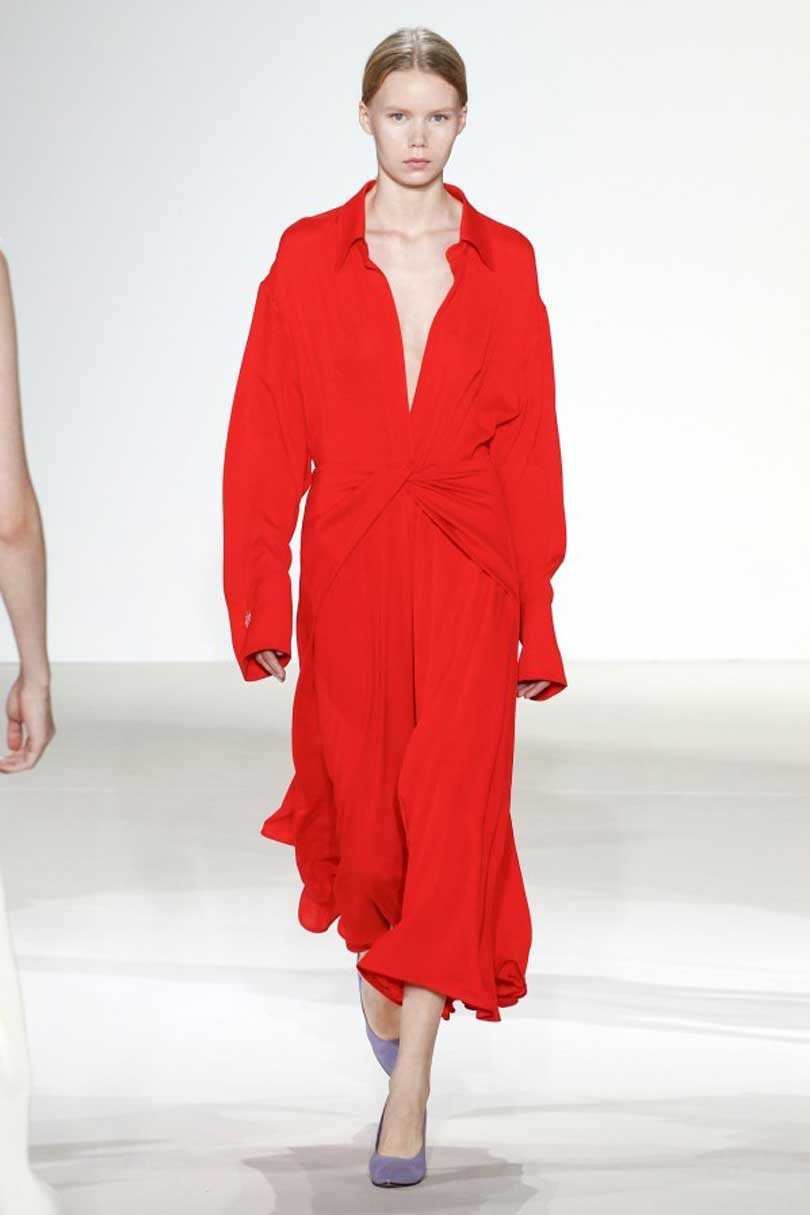 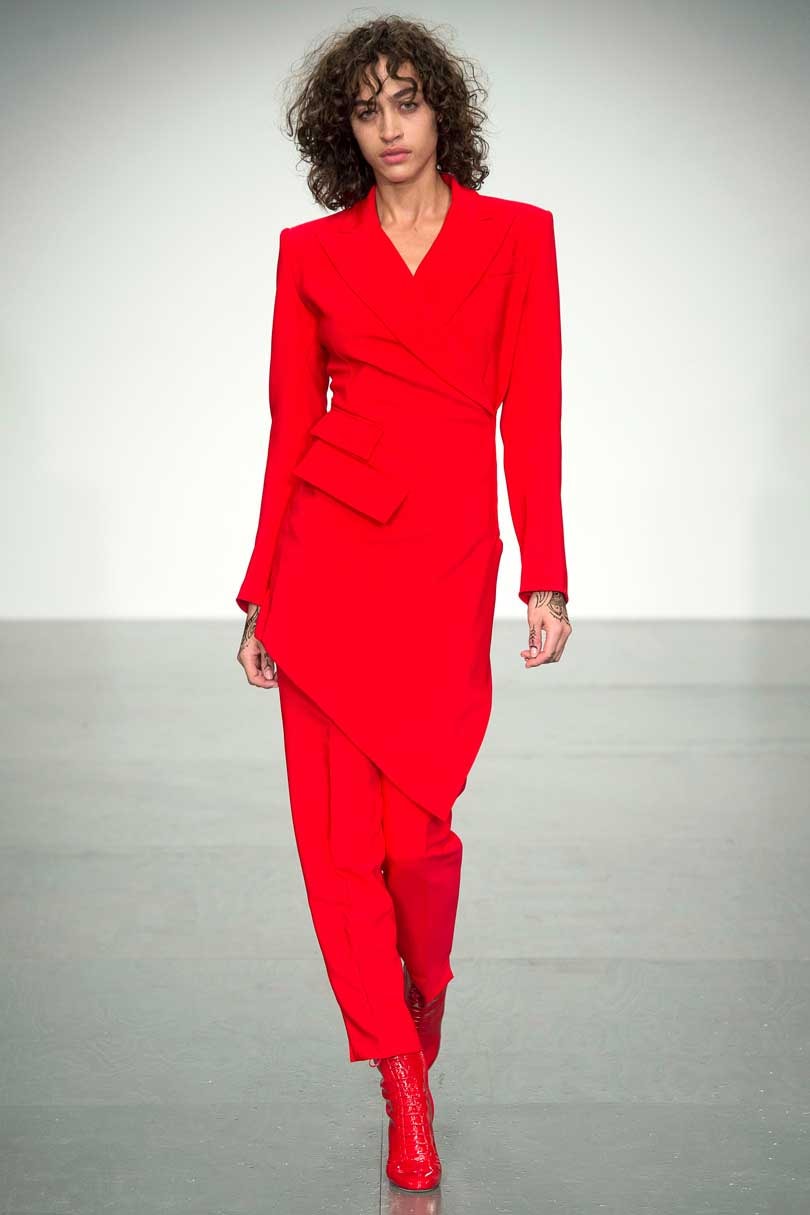 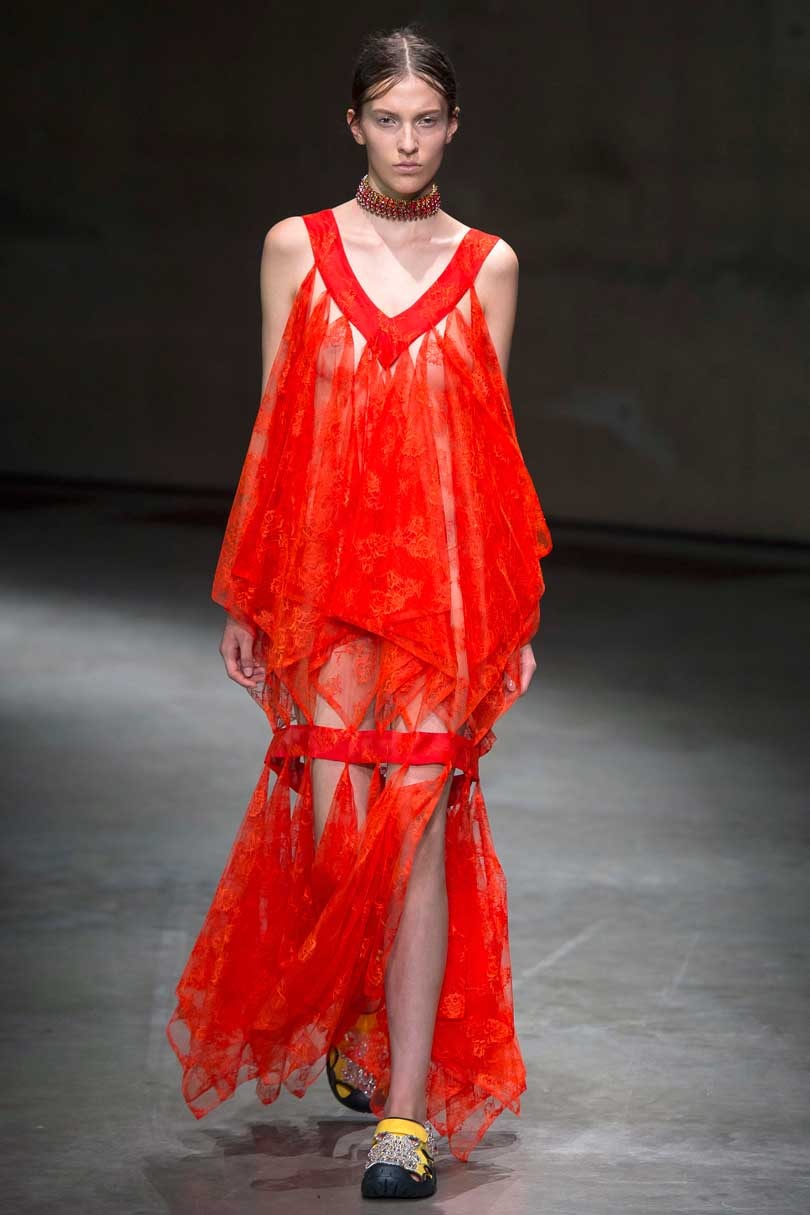 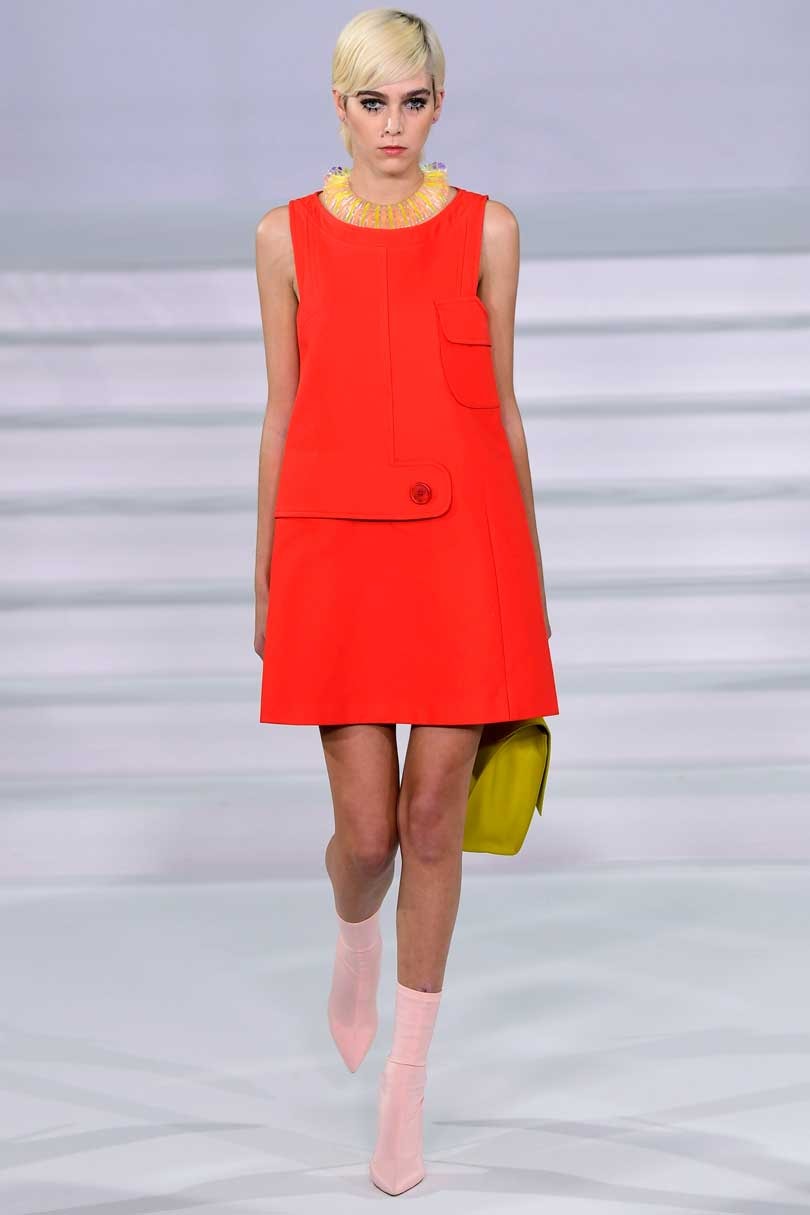 A peach-like tint which has an ‘understated appeal’, according to Pantone. Featured in Spring/Summer 2018 looks from Acne Studios and Fendi, this colour offers a seemingly ‘suggestive scent’ to its wearers. The colour was also seen in the Autumn/Winter 2017 collections from Louis Vuitton and Miu Miu. Nina Ricci also used the colour in head to toe in layered looks. 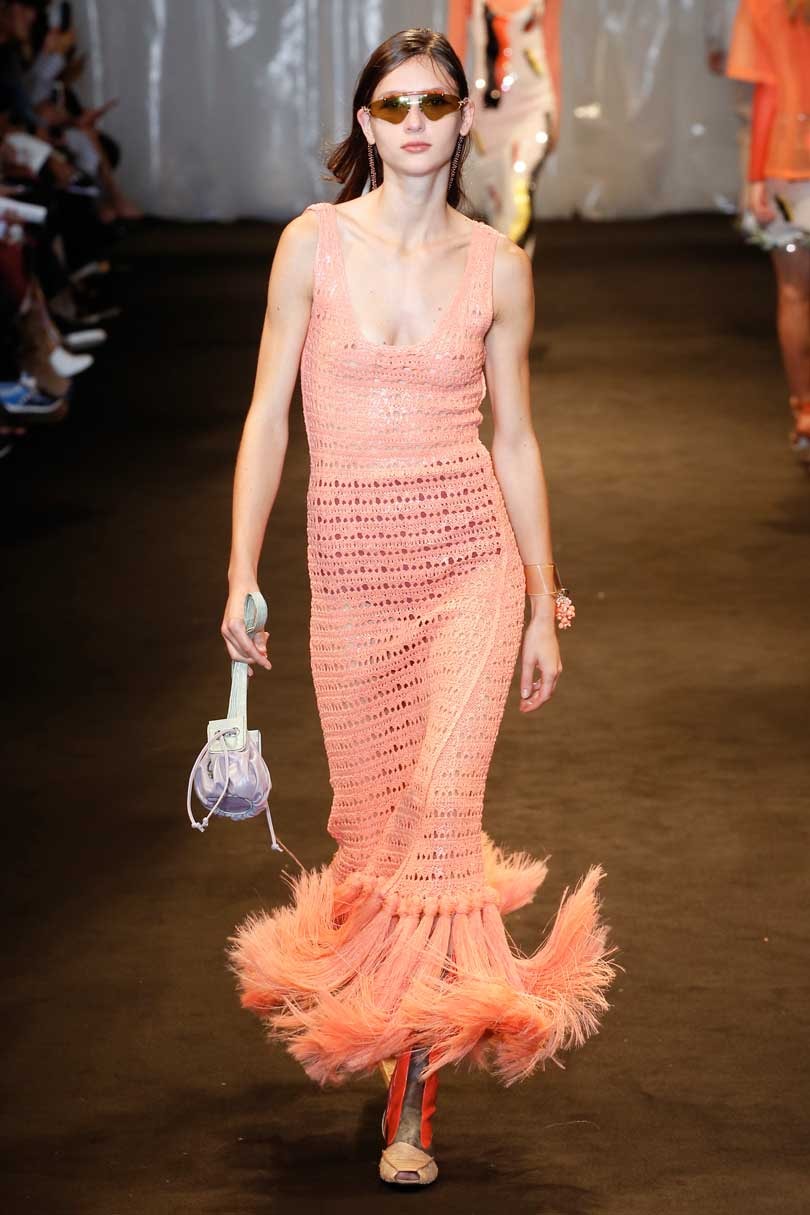 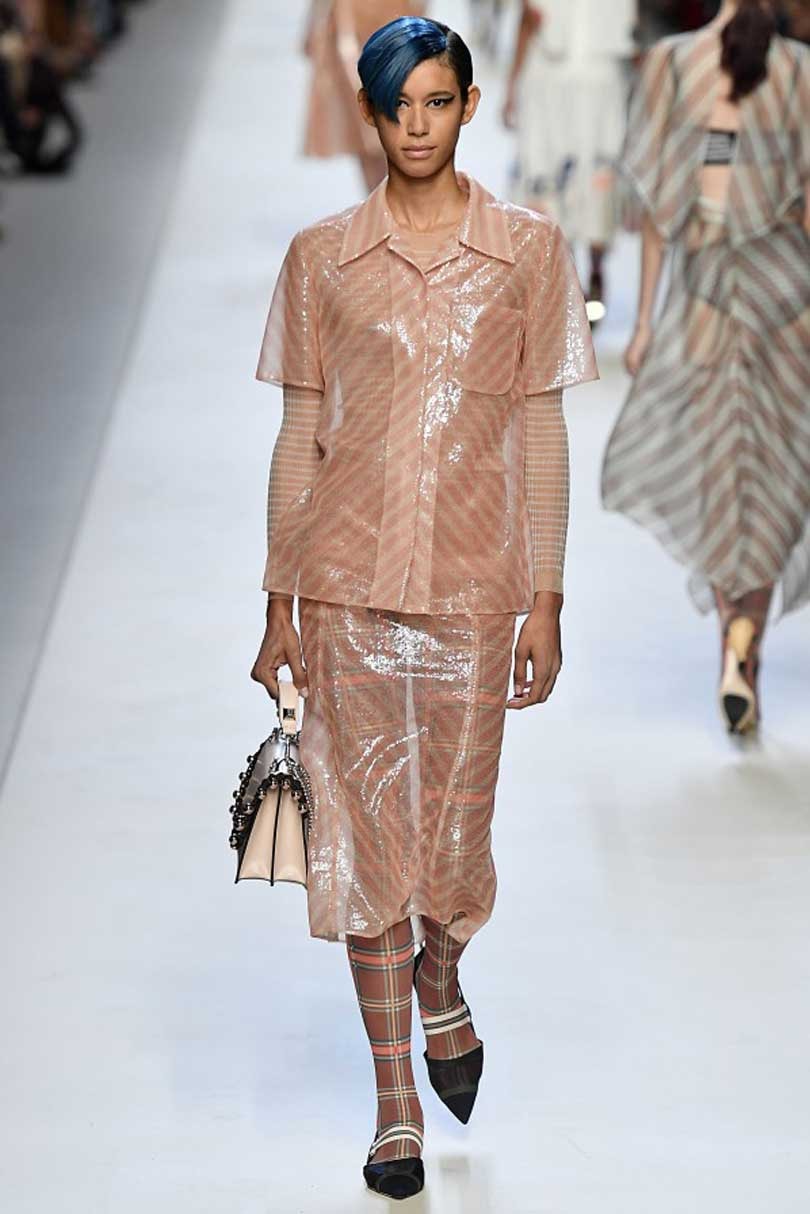 Ultra Violet was hailed as the colour of the year for 2018 by Pantone. ‘Conveying originality and ingenuity, the magical Ultra Violet is a distinctive and complex purple shade that fascinates and intrigues,’ said Pantone on the colour. The institute adds that purple hues have long been a symbol of counterculture and non-conformism. Late pop icons ranging from Prince, David Bowie and Jimi Hendrix all embraced this colour and are examples of the presence this colour demands. Fashion houses including Chloe, Andrew Gn, Gucci, Mulberry and Calvin Klein, Acne Studios and Ellery all used Ultra Violet in their Autumn/Winter 2017 collections, as demand for the colour is set to grow throughout the year. 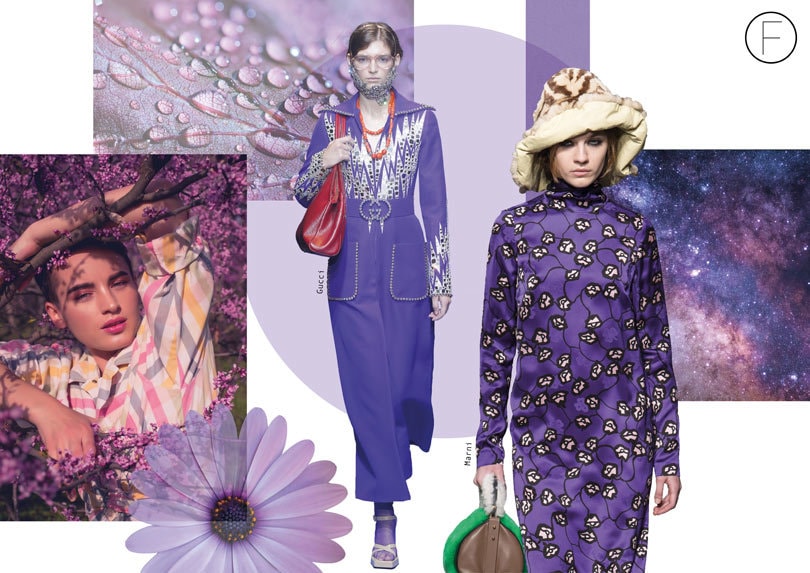 Lime Punch pops off the colour card for Spring/Summer 2018. This citrus yellow shade is not only the most striking of the two yellows but is also the most pronounced from all the trend colours mentioned. Lime Punch was used by, among others, Anya Hindmarch, Pringle of Scotland and Tom Ford. The first two used the colour for sportwear-inspired fashion, while Ford used the colour for an evening dress. 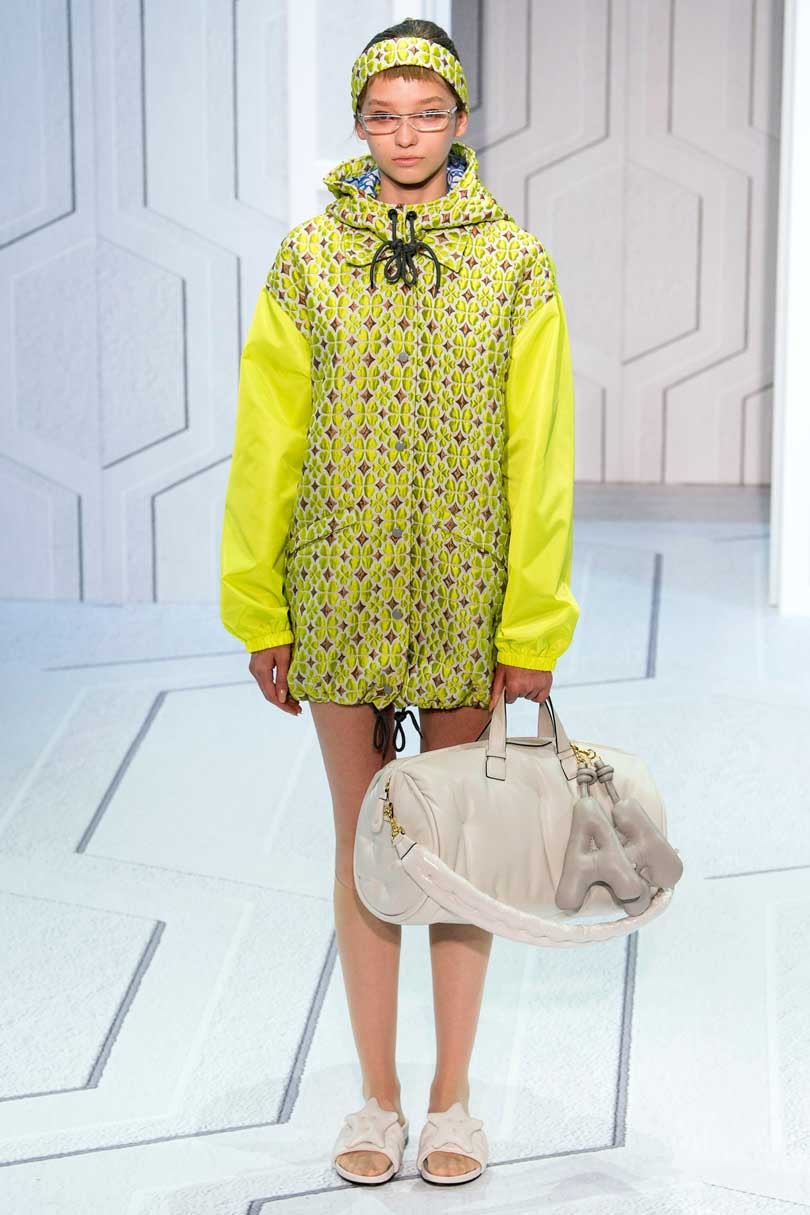 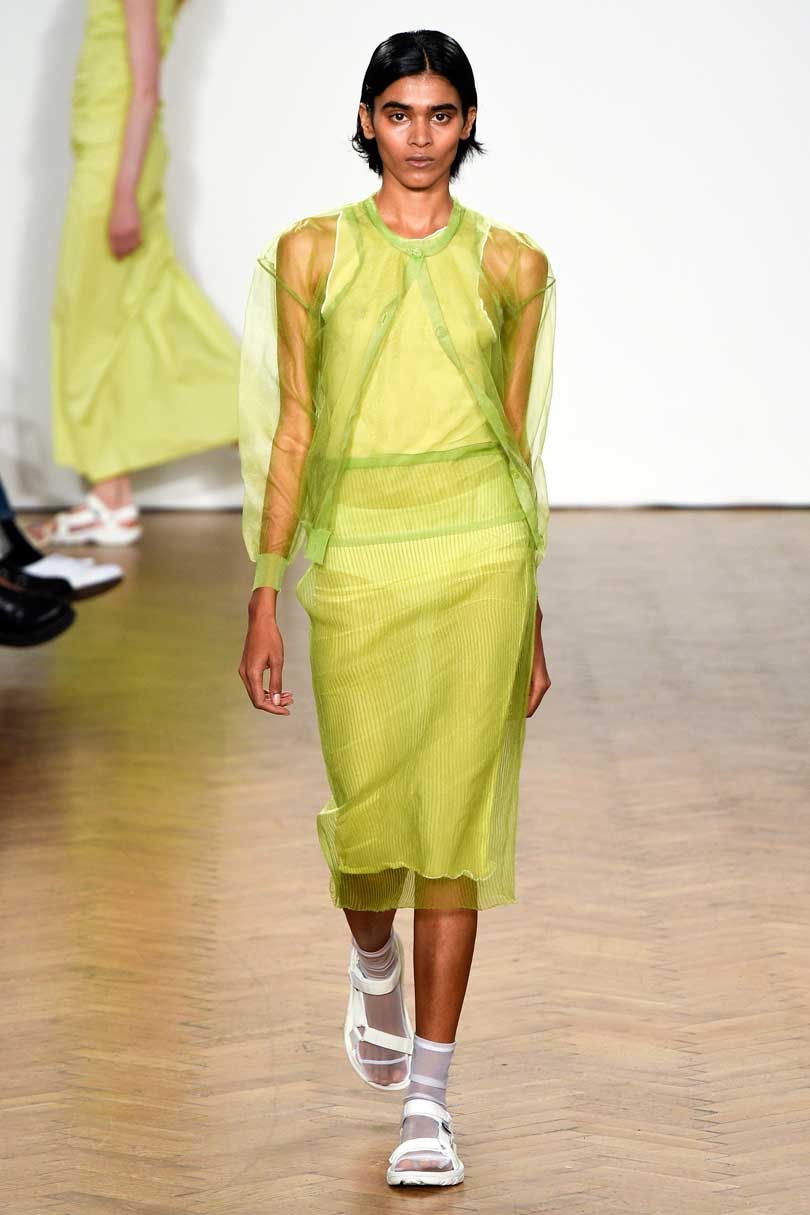 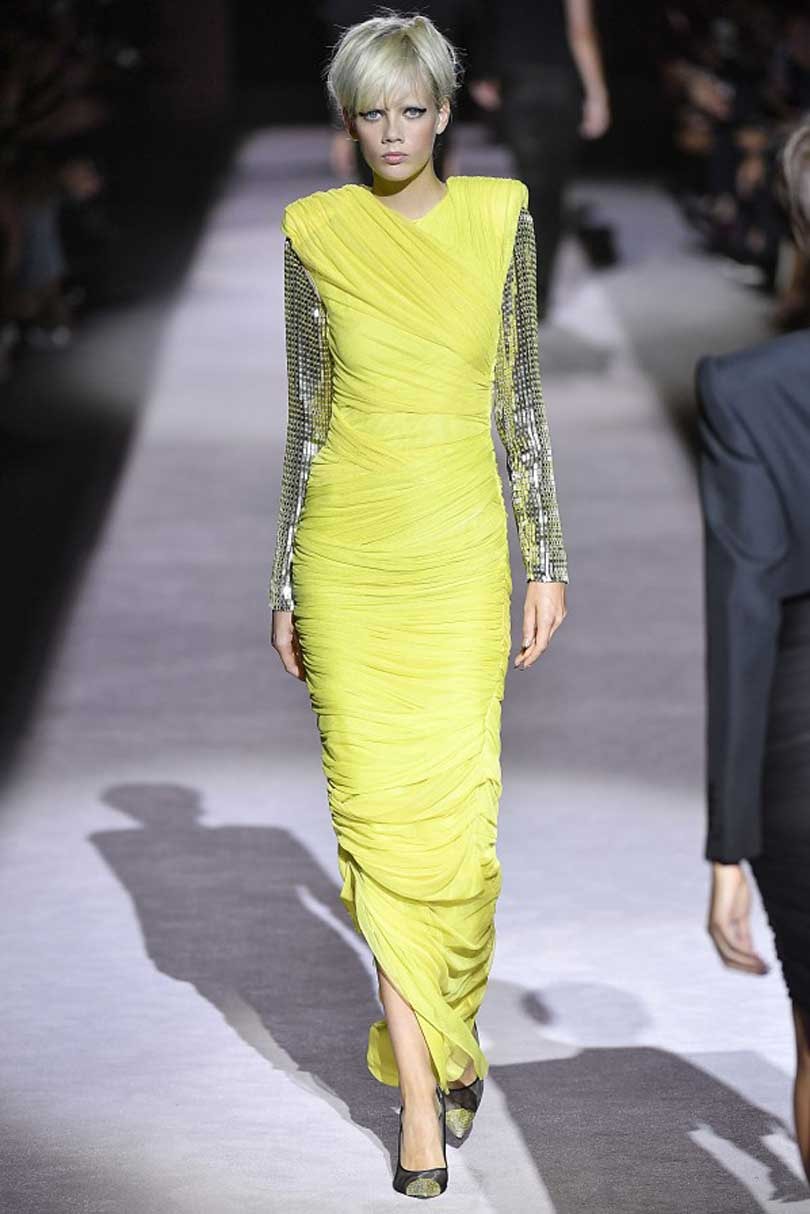 Who said brown colours are just for autumn or winter? Spring/Summer 2018 will see the rise of two brown colours: Spiced Apple, a brown shade with a red undertone and Chili Oil, which can be described as an earthy tone. Spiced Apple was spotted on the catwalks at Acne Studios, Olivier Theyskens and Roland Mouret, while Givenchy showed a leather dress in Chili Oil. 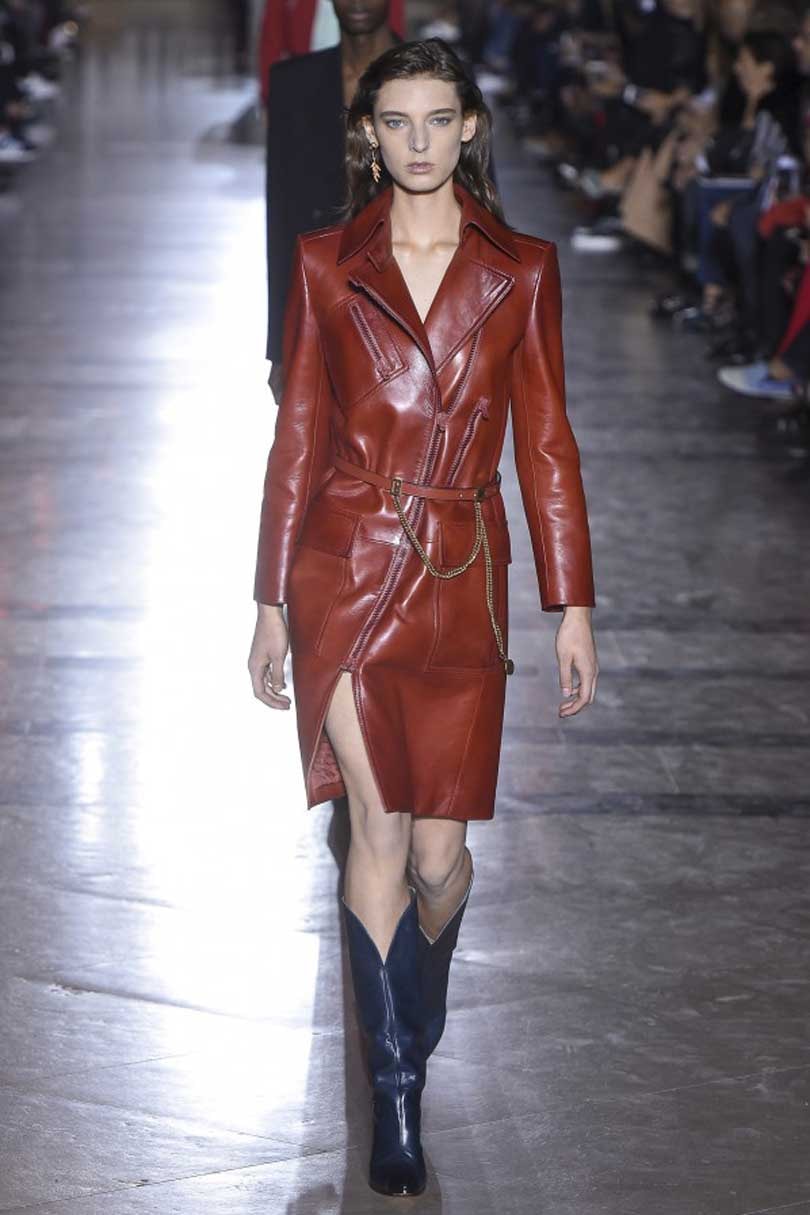 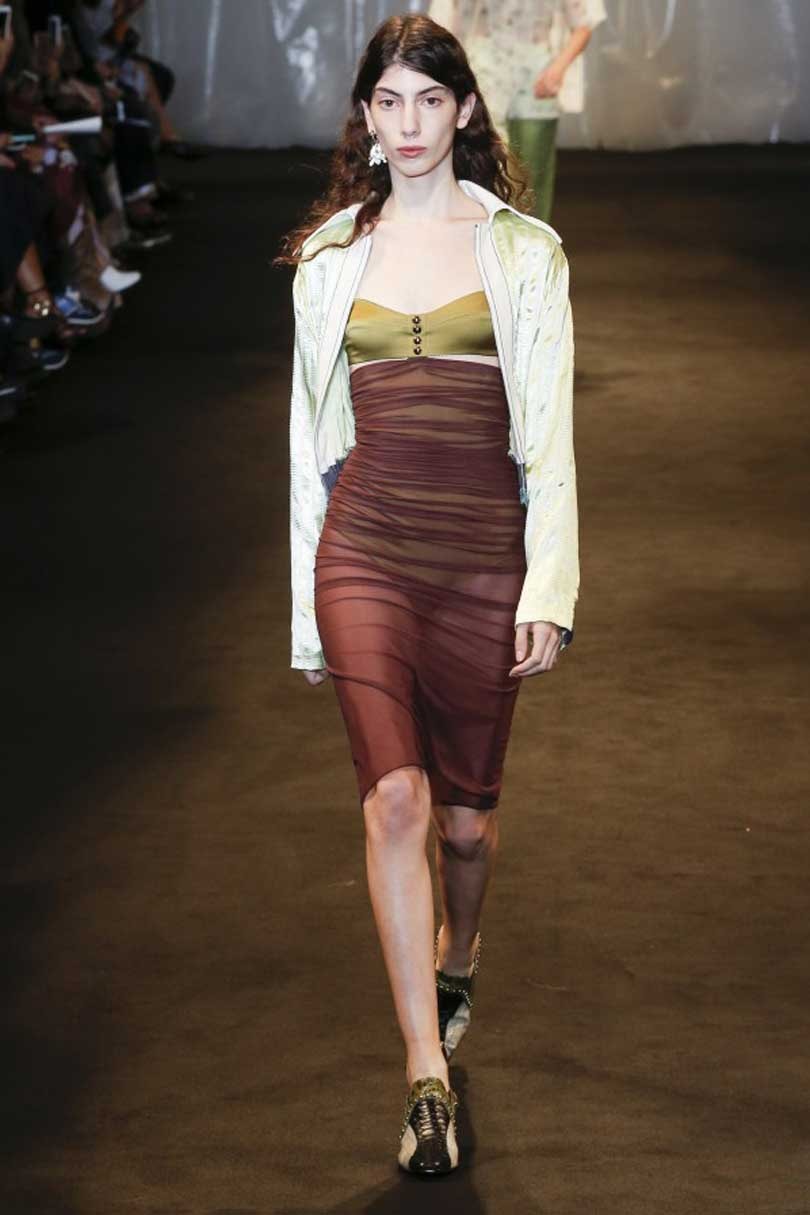 ‘Hinting at retro yet at the same time modern, Arcadia is a cooler, cleaner take on green; its tinge of blue undertone takes us into a new direction for the spring 2018 season,’ said Pantone on this green-blue colour, which was seen in Acne Studios collection for Spring/Summer 2018. 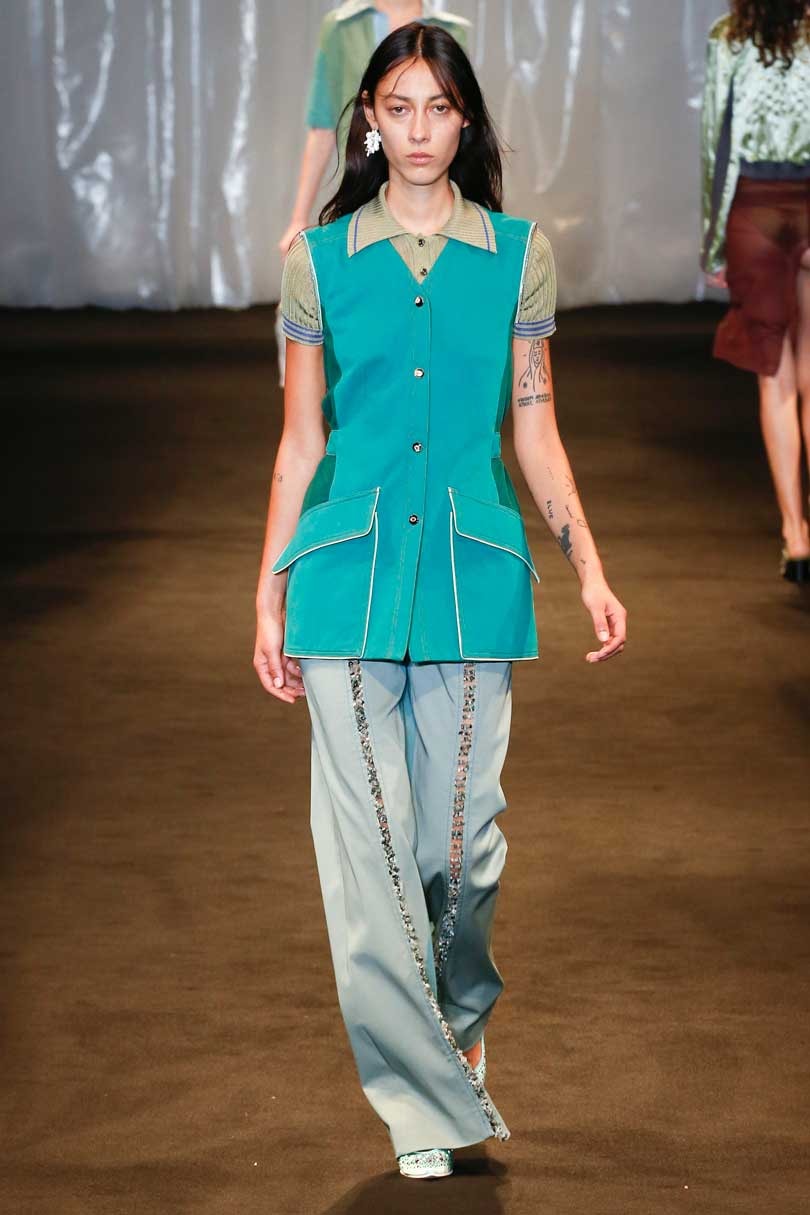 ‘With its gentle petal-like touch, delicate and ephemeral Almost Mauve adds a sense of nostalgia to the spring 2018 palette,’ said Pantone. A light colour, with a touch of pink and purple, Tom Ford used the colour to create an illustrative outfit for Spring/Summer 2018. 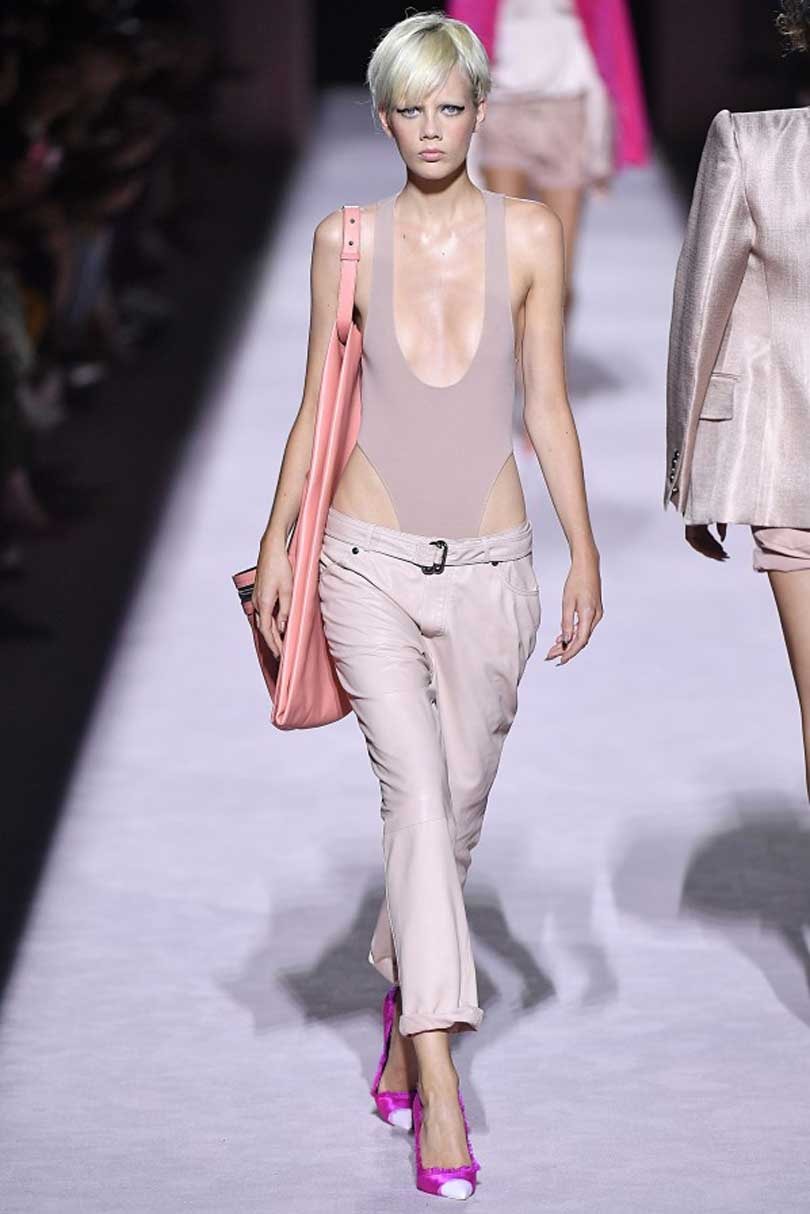 ‘Palace Blue sparkles with energy. Stirring and impressive, a brighter blue for the days ahead,’ according to Pantone. A blue shade, which is slightly reminiscent of combat, this statement colour was used by Fyodor Golan, Emilia Wickstead and Elie Saab for Spring/Summer 2018. 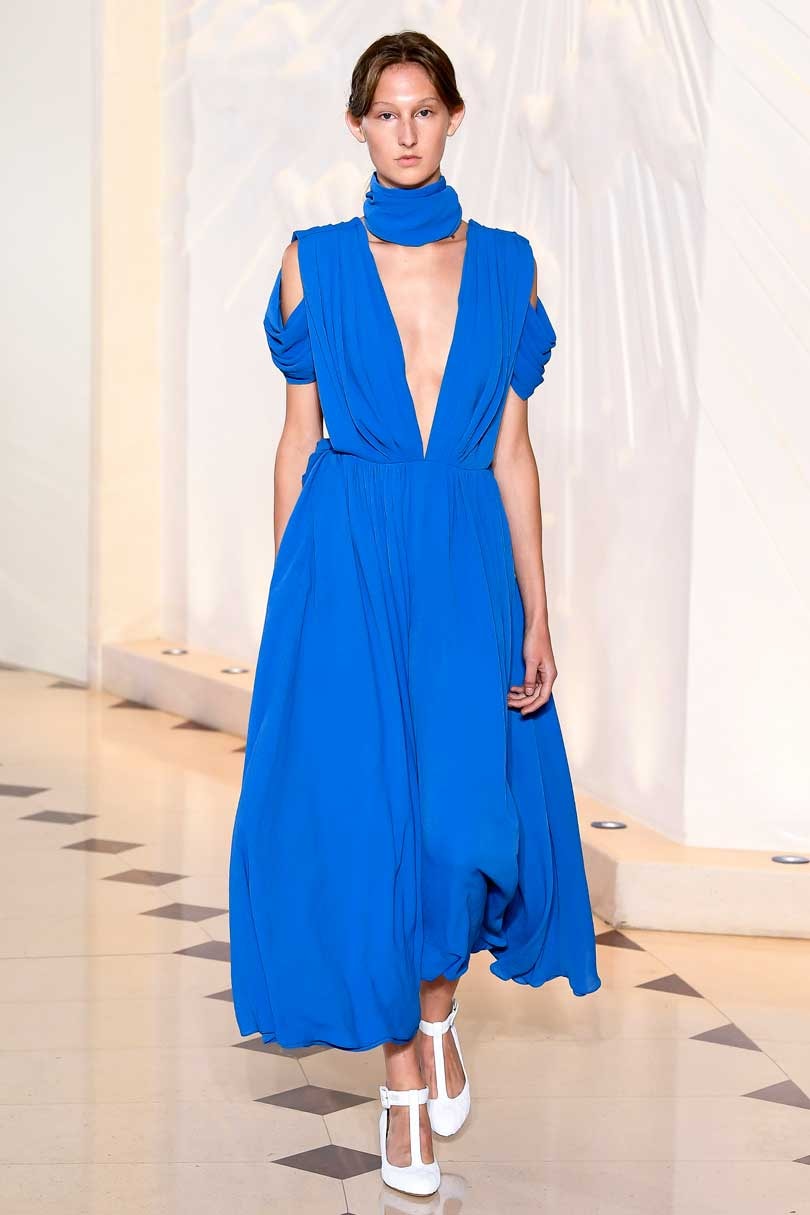