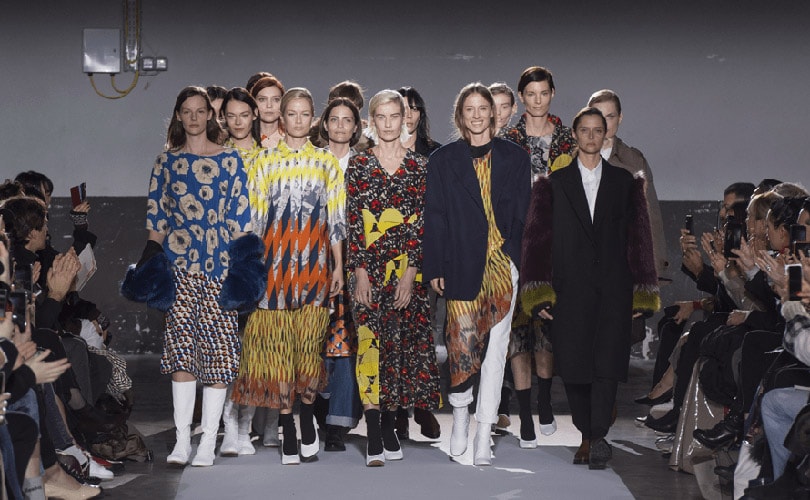 Take Van Noten: The Golden Age of Women Is Upon Us

Enigmatic like the star of an arthouse movie, the heroine of Dries Van Noten’s Fall/Winter 2017 collection meanders to the sound of traffic, snippets of music, snatched conversations, with one hand nonchalantly in pocket, her hair loosely tucked behind her ears. If I were people-watching over an outdoor coffee and spied her, I might be tempted to follow and see where life takes her.

That’s what’s so mesmerizing about Van Noten’s heroine. She’s not a girl. For his 100th show, the designer contacted models who’d walked for him as far back as his first show in 1992. Those familiar faces of the 90s and 00s, softened around the eyes and lips, were radiant in a way we don’t usually see on runways.

Second-time-around is twice as fine

The designer had also raided his archives for his favorite textiles from the past and patchworked, overprinted and reworked them into new styles. Carolyn Murphy at 42 or Liya Kibede at 39 hardly qualify as vintage, but they are entering that age in which women become apologetic––for their years, their wrinkles, their Botox, their lack of Botox. Everyone knows someone who suddenly stops revealing their age––not lying about it, just not offering it. A rose is still a rose, but when the bloom has left, it’s best not to draw attention to it seems to be the message. Tell that to Amber Valletta as she saunters towards you wearing a half-smile, in green and fuchsia iridescent leather while strings play gentle accompaniment. Van Noten, a keen gardener, understands the appeal of perennials better than most. 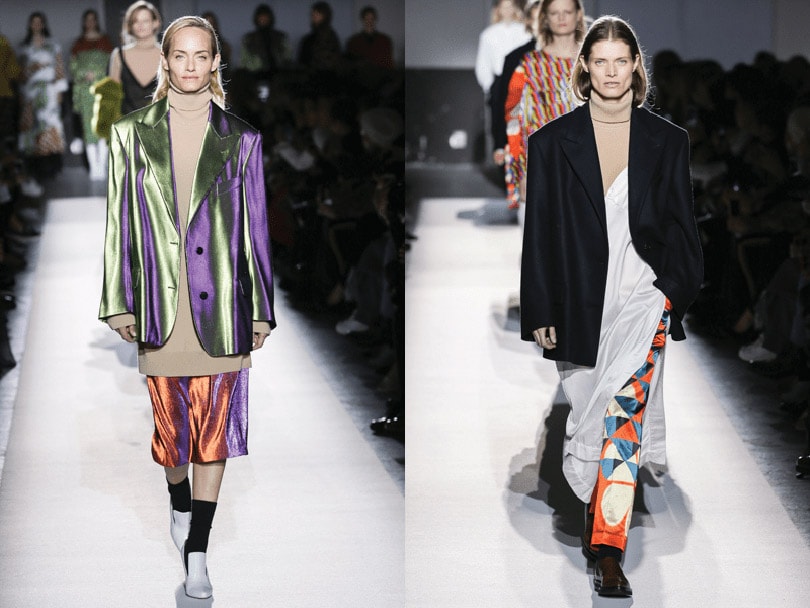 There have been tentative recent stabs at confronting age on the runway, for example, when Carmen dell-Orefice (85) closed Guo Pei’s January haute couture show, or when Lauren Hutton (73) appeared at last season’s Bottega Veneta show. But they are still only one-off moments. Scattered seniors engulfed by sixteen-year-olds. When Dries Van Noten’s army of women, aged between 20 and 50, marched forward in the finale to what sounded like commingled heartbeats becoming as loud as tom-tom drums, it felt significant, powerful. He presented these women as a force to be reckoned with, untapped but vital, awakened. Don’t come for us unless we’ve sent for you, they seemed to say.

The new age of women

Regal, versatile, playful, these females were as integral to Dries Van Noten’s rise as his wonderful textiles. They have become today the runway representation of who buys his clothes: the mother running about in jeans who throws on a magnificent coat to pick up her kid from school, the gallerist who adores his painterly eye, the designer who recycles his 90s pieces because they still look so contemporary. Behind a great man, there are many great women and he is saluting them all.

Cue David Bowie’s haunting words: “I will be king, and you, you will be queen…”

As actresses, artists, businesswomen, with families and different priorities than they had in the 90s, these runway royalty look better than ever in Van Noten. He understands the lives they lead. Perhaps he encapsulates it best when commenting on his own, again referencing gardening: “You want to see the peonies when they are flowering so you can’t go to the Met ball.” 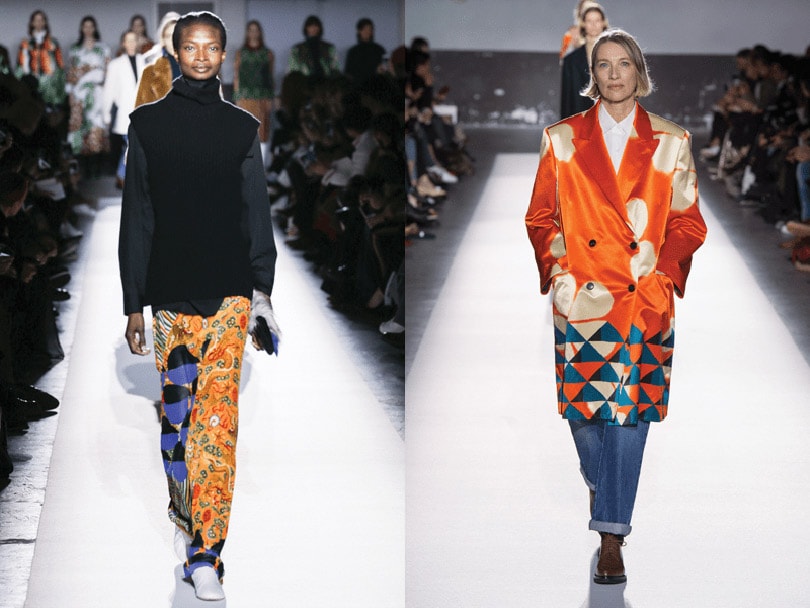 In an interview this month with 1Granary.com, the designer says, “Maybe a lot of people like Gigi Hadid, but is it now so important that Gigi Hadid is on Vogue Runway every two days? Is that ‘fashion’? I think for me fashion is something nobler than the make-up tips of Kendall Jenner.”

Women with the purchasing power to fill their closets with Dries are not trying to be ever-new. They are not shedding their skin, but growing comfortable in it. They are uninterested in competing with their 16-year-old overly-emotional shambolic selves. “We’ve got this! Now do you?” they might challenge designers less worthy of them.

Because to see the unique confidence of Silvia van der Klooster, Alek Wek, Guineveere Van Seenus, to glimpse the little giggle Debra Shaw lets slip as she sashays past Caroline de Maigret, communicates something drastically new to fashion, yet essential. It’s something we just gotta have. Real live women on the runway as opposed to the promise or suggestion or illusion of them––we’ll take one in every color! This show wasn’t about nostalgia, this was a glimpse into the future and its momentousness apparently had many a hardened editor ferklempt and fumbling for a Kleenex.

Van Noten says, “For me clothes are really something you make with your heart. You do your best to create something that you really believe in.”

Completely independent, the designer has reached this milestone on his own terms: he pays for no advertising, courts no celebrities, has no perfumes and licensing deals, designs no special collections for department stores, and yet his business is strong and thriving.

So much of fashion today is flashy but fleeting, leaving us unmoved. This collection (we haven’t even touched on the exquisiteness of the clothes, but so many other reviewers have) while boldly promoting age diversity was so sincerely executed and without fanfare, that it presented us with the future as if we were already there. Just as every day we make memories while moving forward, Dries Van Noten’s organic vision has placed us ahead without effort. All we have to do is to stride into our future, owning our years, in our pristine white ankle boots.

We have been lucky to witness this designer’s exhilarating 25-year-career arc and are grateful to him for the artistry he has given our daily lives. He is letting us know he’s grateful for us too. Can fashion offer anything more special than shared human experience?