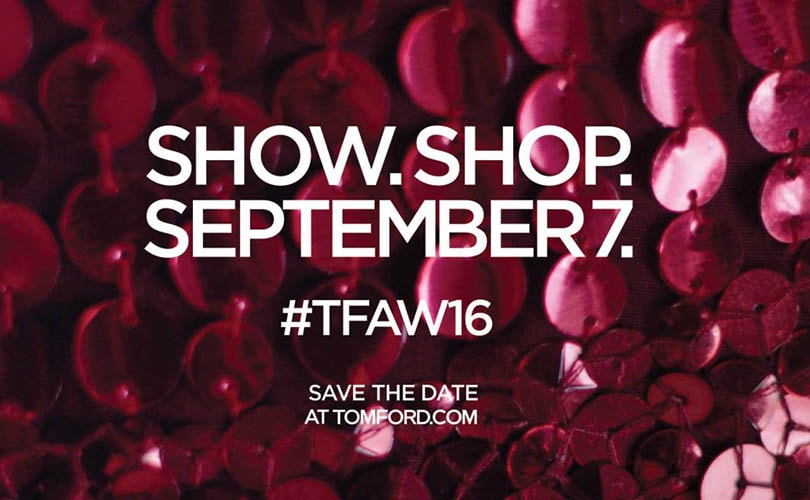 The fashion designer/movie maker event signals the start of New York Fashion Week and will be lived streamed to the public online online at TomFord.com. Tom Ford, together with Burberry and Tommy Hilfiger, was one of the first designers to embrace a new concept for fashion week by showing menswear and womenswear together during a single show and then offering the collections presented for sale immediately afterwards. This new show format, which was created around the sense of immediacy, means that the collections have been produced and have already been shipped to Tom Ford wholesalers around the world and will be moved into stores following the show.

For the designer himself, the step was a liberating move. "It’s kind of great, because also I haven’t looked at the clothes since I did them," said Ford to Vogue US in an interview at his Madison Avenue flagship store in New York. "Luckily, I really love them and I’m not tired of them." Although he does not seem to be worried with the effect the new show format may have on sales, he is unsure if this shift will become a permanent move in showing and production. "I don’t know if this will be sustainable," he added. "We’ll have to see. I’ll have to see how it works; see how our customers respond to it. The weird thing is, there’s no long-lead press because I’m not showing it to anyone. So, I don’t know how that’s going to work going forward, having no clothes to send magazine."

Tom Ford is the first designer to showing the new "See Now, Buy Now," format and will be followed by Tommy Hilfiger #TOMMYNOW event, set to take place this Friday and Burberry show, taking place next during LFW.