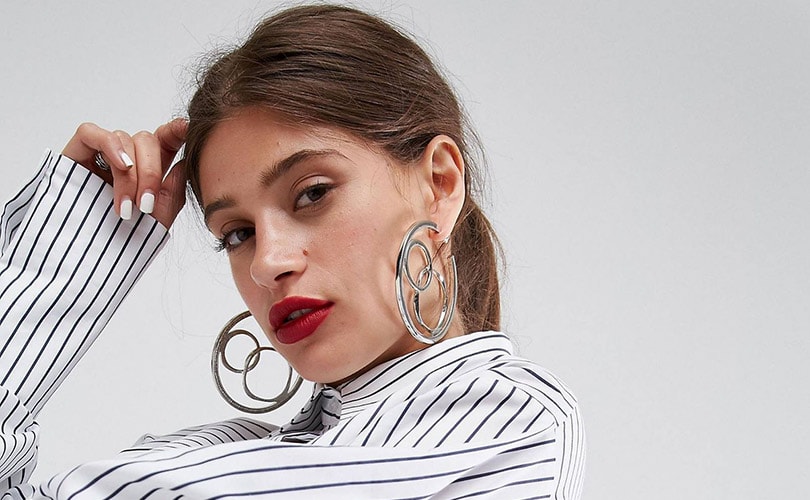 Accessories can make an outfit go from basic to wow, which may help explain why bags, jewelry, watches, sunglasses, belts, gloves and scarves account for no less than 18 percent of the fashion market. Not only is the category significant, it is also growing: according to retail technology firm Edited, fashion retailers around the world offered 4 percent more accessories last quarter than they did the same period last year.

However, not all accessories are created equal: some are becoming more popular, while others are falling out of fashion. Interested in finding out which ones? Edited took FashionUnited through its assessment of the segment.

Consumers are up to the neck with necklaces

While the category as a whole is growing, Asos and Boohoo have both reduced their accessories’ offer by 16 percent in the last quarter. As such a significant cut isn’t usual in the industry, Edited decided to take a closer look at the matter. Turns out the aforementioned e-tailers are not moving away from accessories altogether, but rather cutting back on necklaces. Asos reduced its necklace offering by 48 percent, while Boohoo decreased it by 34.5 percent.

They are not alone. An assessment of over 80 retailers in the US and UK showed a steady decline in necklaces since January 2016. 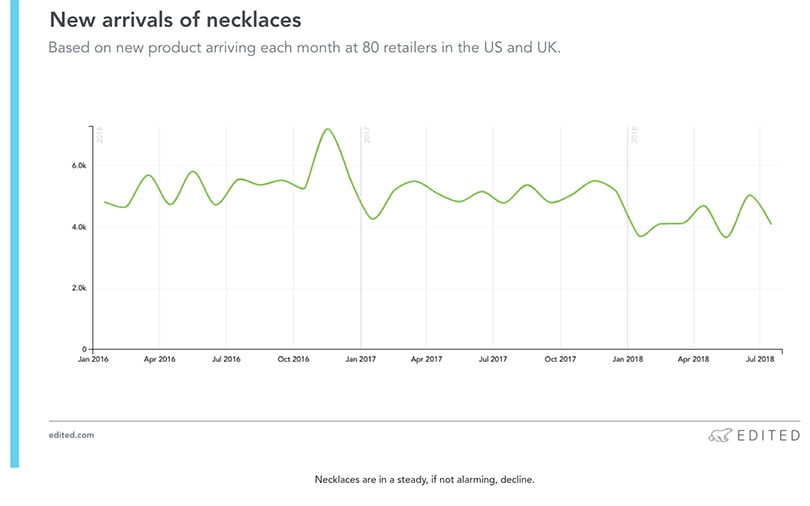 Charms are not so charming anymore

Bracelets have fallen by 2.7 percent in the last quarter, but it is worth delving into a particular kind of bracelet. Danish jeweler Pandora, best known for its charm bracelets, has seen better days: the company reported a 26 percent drop in earnings this week, after cutting back 400 jobs in August. “The charms category is not increasing to the level we had expected. Consumers prefer a simpler look with fewer charms on the bracelets”, said Chief Executive Officer Anders Colding Friis to American fashion publication WWD at the time. According to Friis, Pandora’s revenue growth from charms declined 7 percent in the second quarter of 2018.

Edited’s assessment confirms the trend: while charm bracelets are still growing worldwide at 2.2 percent, they are far behind growth in the overall jewelry category, currently at 7.7 percent. 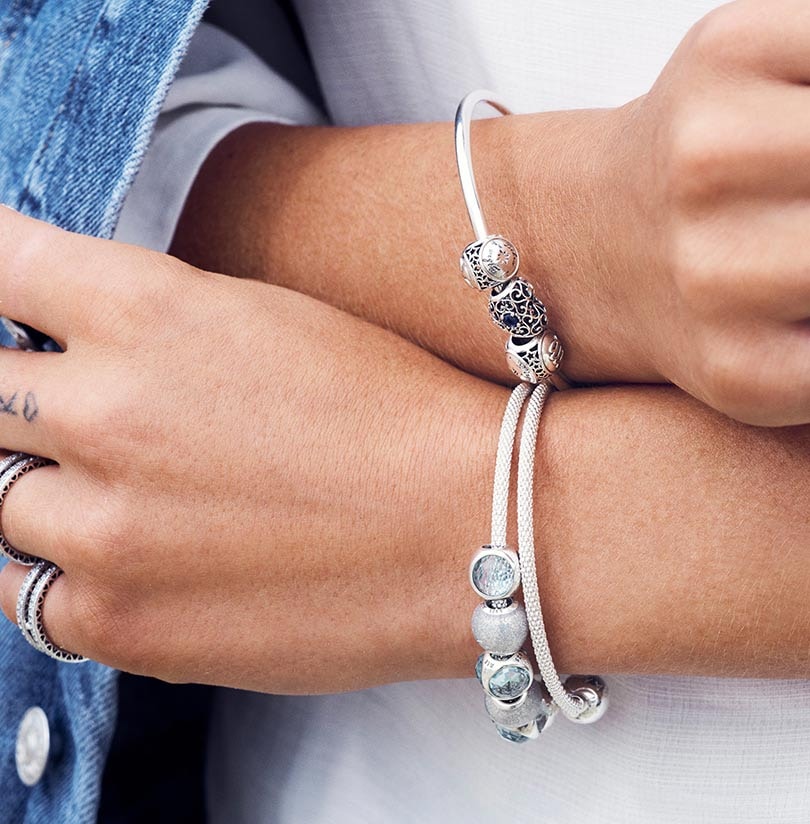 Statement earrings on the rise

Earrings are taking over from necklaces and bracelets. The world’s five biggest fast fashion retailers have increased their earring arrivals by 162 percent in 2017. In the last quarter, the 80 US and UK retailers analyzed by Edited offered approximately 2,000 more earring styles in July 2018 than they did in January 2016. The growth is being driven by statement pieces such as oversized hoops, colorful tassels and mismatched pairs. 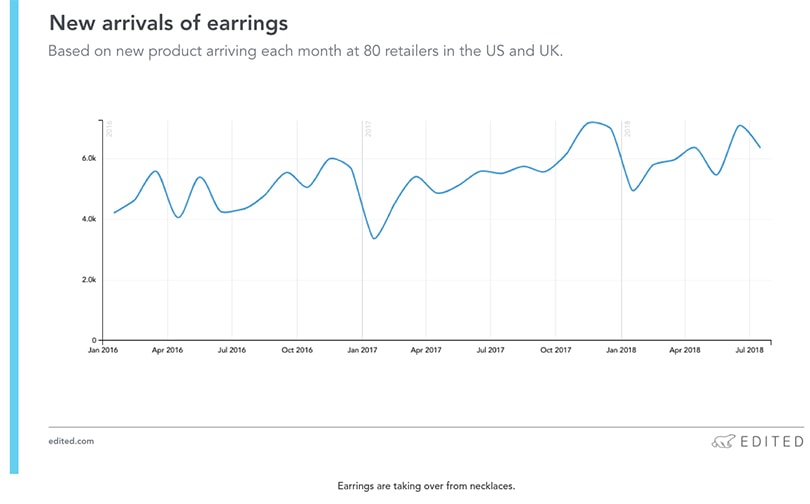 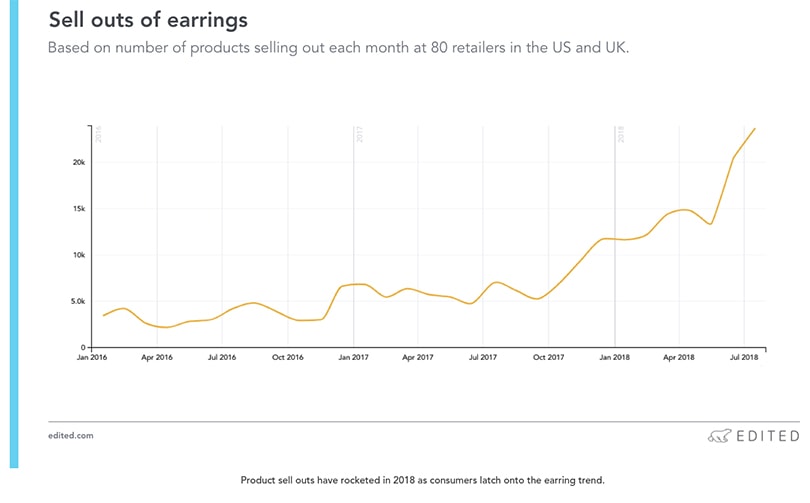 In fact, the analytics firm can pinpoint exactly when earrings became so hot: the third quarter of 2017. 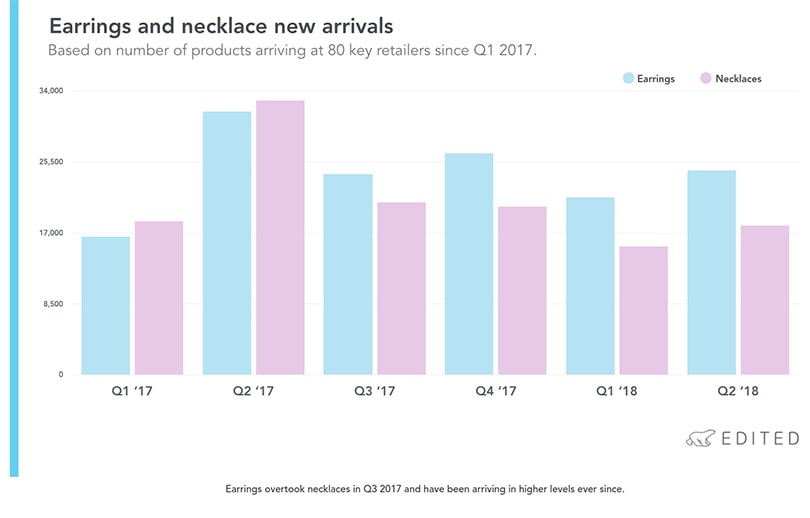 But why is this shift happening? According to Edited, it’s all because of selfie culture. Necklaces and bracelets may not appear in the shot when one is taking a selfie for Instagram. Earrings, on the other hand, are always on display, and they can generate more likes if they are attention-grabbing, which explains the rise in popularity of statement earrings. Hats, berets and sunglasses are benefitting from a similar effect. 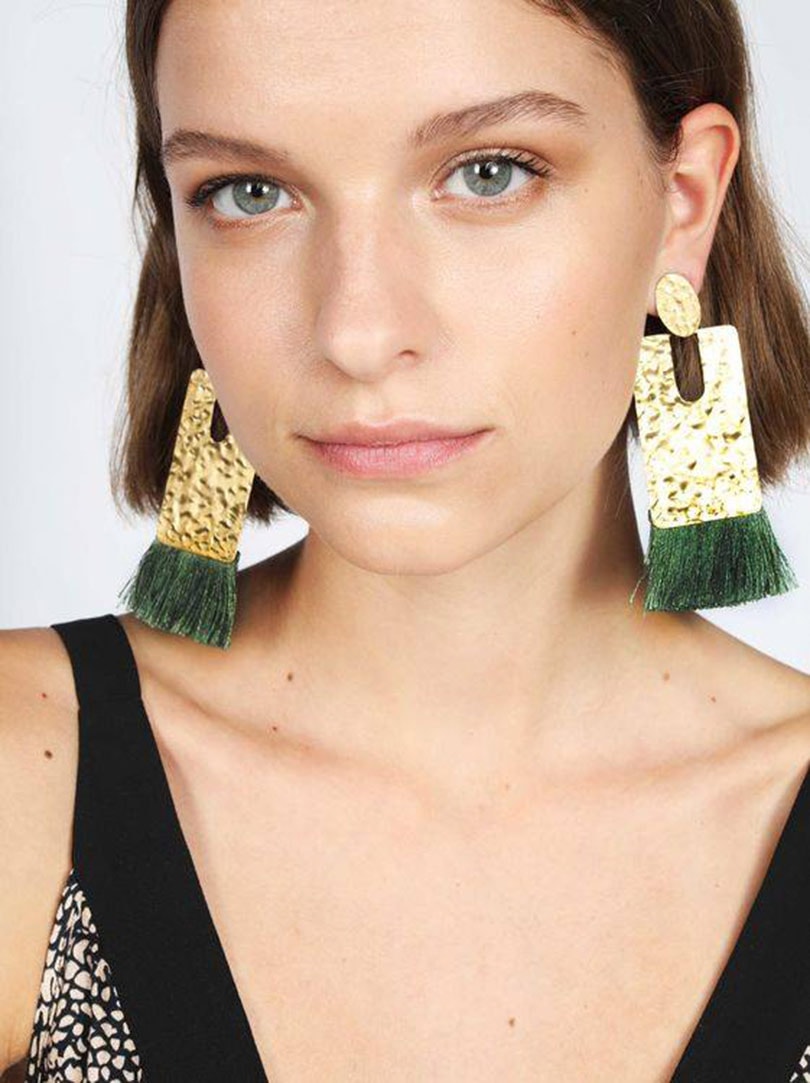