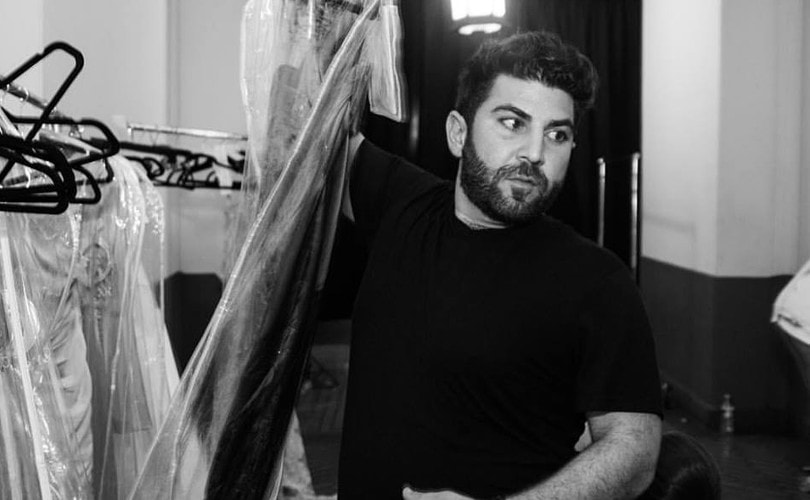 Oday Shakar is still young but he has already lived through more than your average American fashion designer: childhood bullying, two years in Iraq after the Gulf War and cancer. But he's back stronger than ever to relaunch his label after a two-year hiatus with full-skirted gowns of breathtaking grace and elegance that would look right at home in a James Bond movie.

His stunning collection for spring/summer 2017 inspired by Middle Eastern art, Arabic calligraphy and geometric prints aroused an outpouring of oohs, aahs and raucous applause at New York Fashion Week. "I realized I needed to find beauty in my own story so that's where I grabbed inspiration for this, so I mix contemporary Middle Eastern art with beautiful simple silhouettes for everyday (wear)," Shakar told AFP. And what a story. Born in southern California to a Harvard-educated Iraqi father and impeccably stylish mother, Shakar grew up riding horses. But his world was upended when he moved to Iraq as a 12-year-old.

It was after the 1990-1 Gulf War when US-led forces expelled Saddam Hussein's troops from Kuwait. He did not speak Arabic and suddenly found himself in the very different world of Baghdad. "It was a bit of a culture shock," he admitted. But it was in Iraq that Shakar realized he wanted to be a designer. "My aunt studied fashion design and wasn't able to pursue it, so in a way I'm doing all of this because she didn't get the chance and I have the opportunity, being an American," he said.

Shakar first launched his label in 2009 aged just 25 and has dressed the likes of Oscar-winning actress Sandra Bullock, but his New York show was the first of his career.

"A little nervous," he giggled backstage when asked how he felt. The Oday Shakar woman is a woman of the world, he explains. Elegant, timeless, conservative and yet cutting-edge, his designs could be worn by devotees from across cultural and geographical divides. "She is well travelled, she's educated, she is very bold, she knows what she wants," he told AFP. "She also likes to feel glamorous but doesn't want to be wearing a fully beaded gown anymore... to me that's a thing of the past."

From the first twangs of Middle Eastern music, Shakar transported the crowd into a world with a simple yet sophisticated silhouette. There were the full skirts for day and evening, cinched at the waist in delicate geometric patterns, or two-tone skirts in purple and violet, or black and gray that shimmered in the light. Capes billowed behind, necklines were high and cut-outs on the sleeves. There were also tight pencil skirts in suede, wide-legged pants with pleated front panels and jodhpur-style pants with a strap under the foot.

Moving to New York only six months ago, Shakar hit the ground running, developing and producing everything in the Big Apple. "It's definitely had its ups and downs," he said. "But it's been actually one of the more inspiring times of my life."

He was diagnosed with stage four thyroid cancer in 2009, but has been in remission since 2011. Shakar just sees it as part of life. "It's how you overcome those things and not so much what you're going through at the moment, but looking further and growing beyond it and seeing how you can grow stronger," he said.