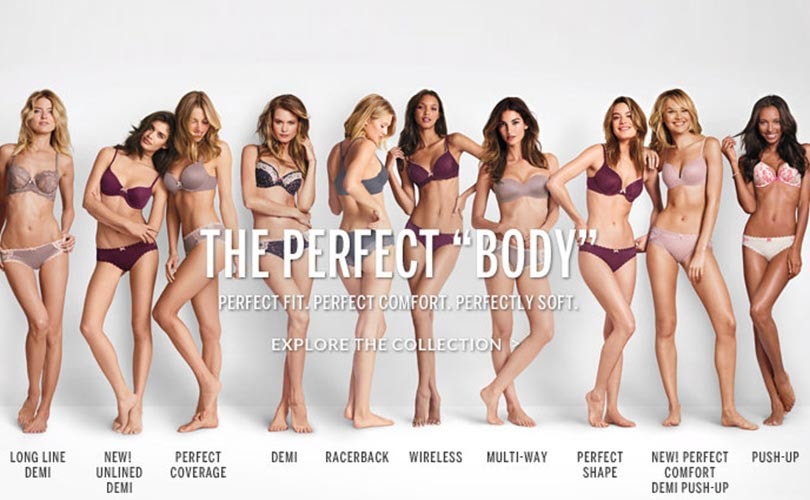 Victoria's Secret latest advertising campaign for its new bra range, entitled the Perfect “Body,” has sparked an online movement #iamperfect, with thousands of people signing a Change.org petition demanding an apology from the brand.

The ads for the American lingerie label feature toned models posing in numerous bras which are said to promise their wearers the perfect “body.” However many customers feel that the use of the phrase “perfect body” combined with the models physique sends out a damaging message to women around the world.

“We would like Victoria’s Secret to apologise and take responsibility for the unhealthy and damaging message that their ‘Perfect Body’ campaign is sending out about women’s bodies and how they should be judged,” reads the petition on Change.org, which was launched by Frances Black, Gabriella Kountourides and Laura Ferris from Leeds.

“We would like Victoria’s Secret to change the wording on their advertisements for their bra range Body, to something that does not promote unhealthy and unrealistic standards of beauty, as well as pledge to not use such harmful marketing in the future.” Together the students ask women from around the world to show their support for their campaign by sharing the #iamperfect.

Black revealed to the Telegraph that she first saw the advertisement in Victoria's Secret store in the Trinity Shopping Center in Leeds. Afterwards, she decided to launch the petition along with her friends, which has gained over 9,000 signatures since it was posted last week.

“A brand like Victoria’s Secret is hugely popular in America and in the UK, and they mainly market to young women. It’s really hurtful to women’s self-esteem. I’d like them to apologise and take accountability for choosing the wrong words for the campaign,” said Black.

Victoria's Secret has yet to respond to the petition, although the lingerie label seems to have removed the ad in question from its US website's homepage.