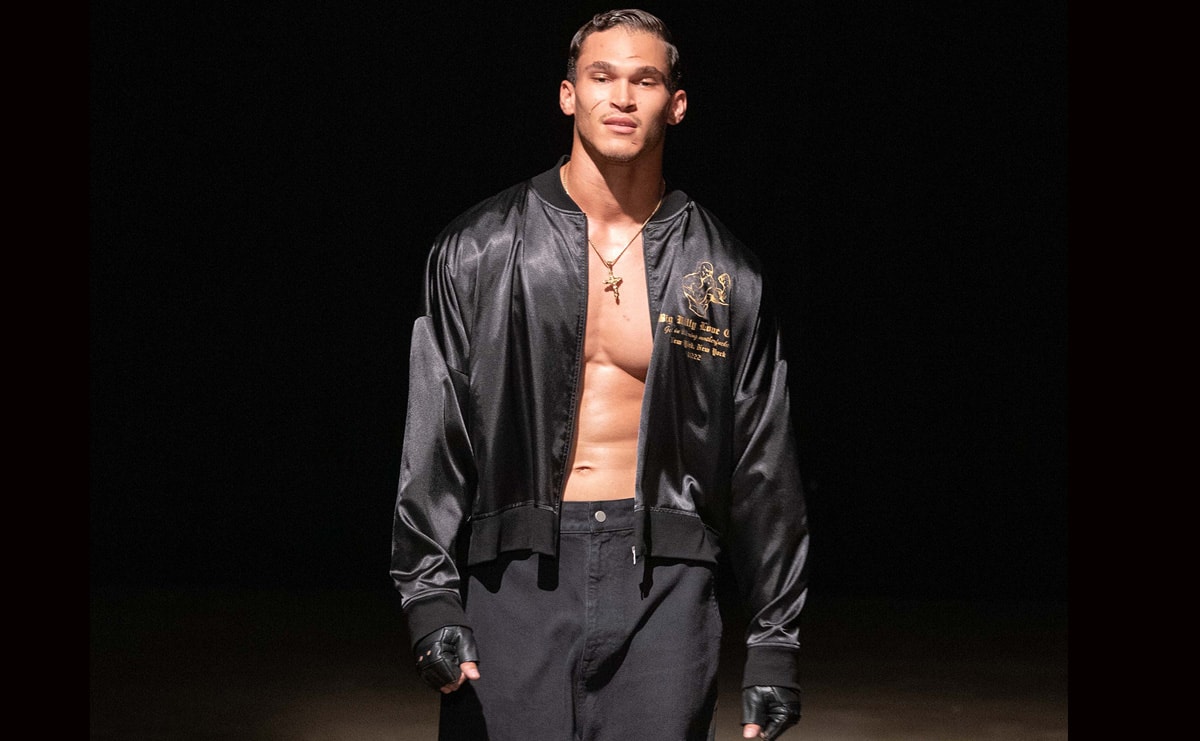 More New York-based fashion designers are opting to show off calendar, Willy Chavarria being one of them. The designer presented his spring/summer 2020 menswear collection on Wednesday, July 24 to a full-house of spectators. Chavarria continues to promote his politically influenced, minimalist designs that are literal statement makers. 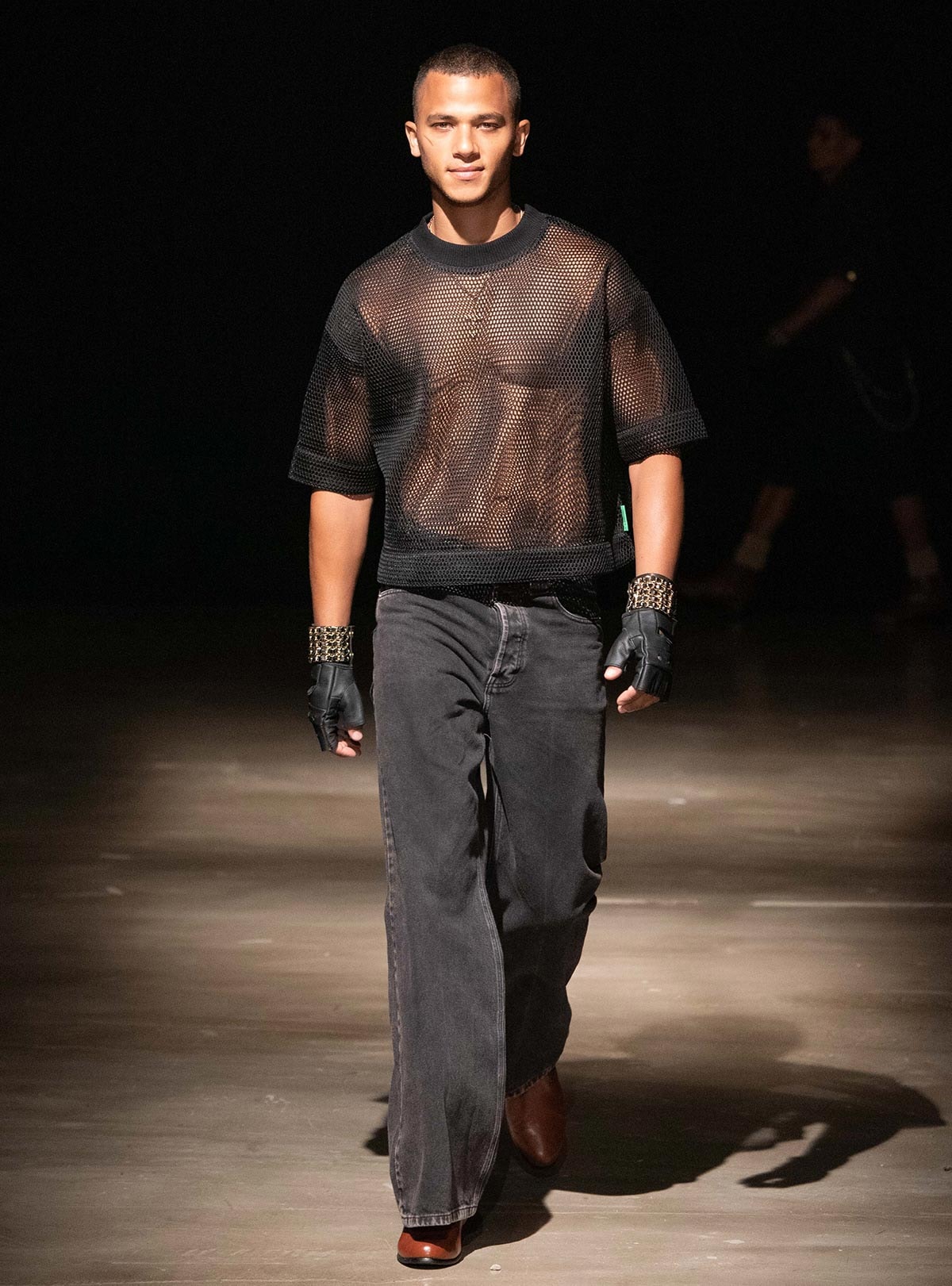 Chavarria's inspiration for this season came from San Francisco in the '90s and a nightclub he used to work at called The Love Garage. It was the period in which New York house music started hitting San Francisco and the rave culture was starting to grow up and embracing a deeper, sexier sound. Graphics and Peruvian cotton knitwear were used to recreate the era and feeling of that time period for this collection. Chavarria aimed to create a luxurious type of look, incorporating satin, heavy washed denim, and jewelry done in collaboration with Chrishabana. 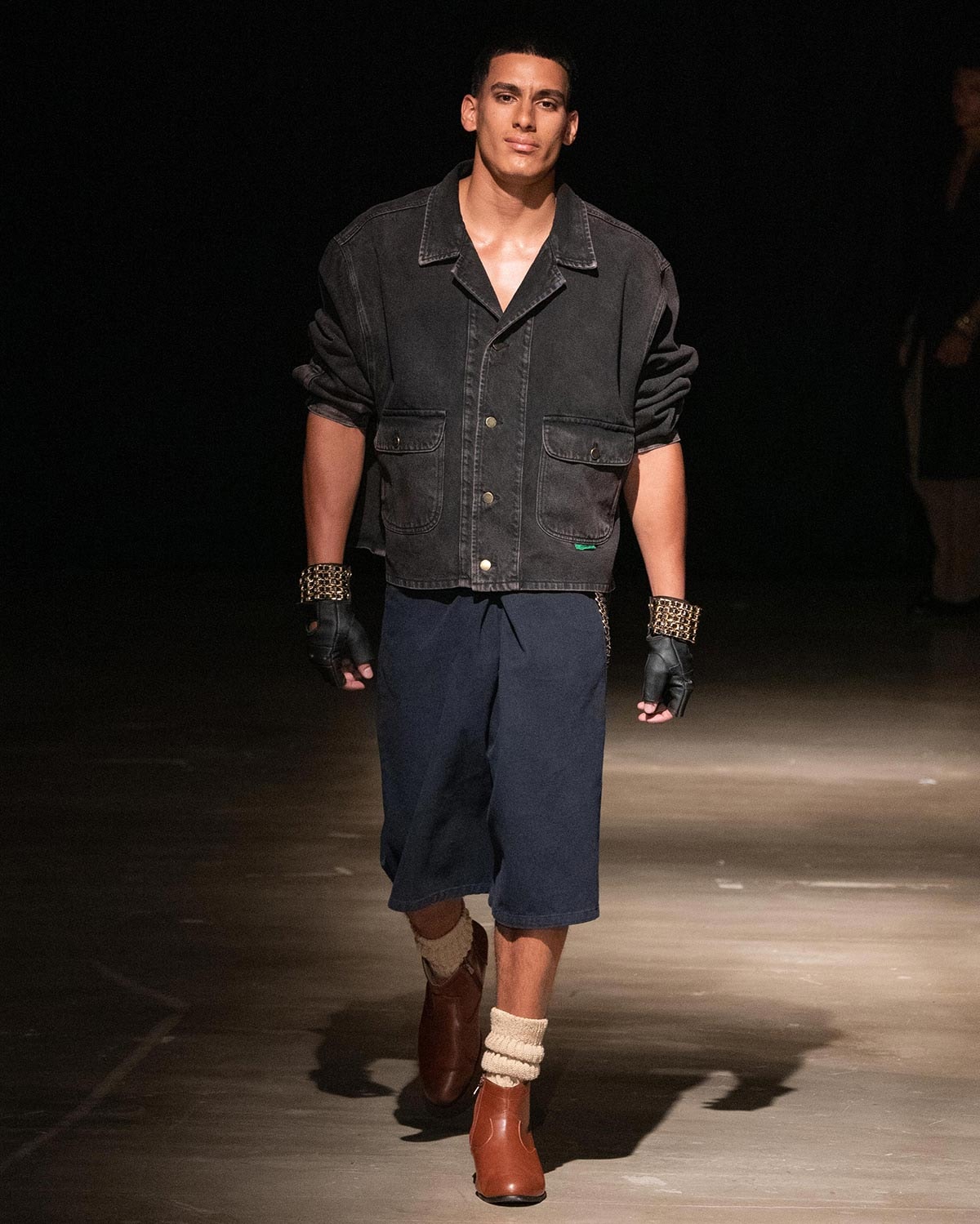 This season both designers expanded the scope of their ongoing jewelry collaboration by creating leather wrapped chains and crystals. The runway show also featured a collaboration with Los Angeles-based shoe brand K-Swiss. "I'm from California, and I grew up wearing K-Swiss, to me it represented this thing of luxury that Americans, especially more poor Americans wanted to wear," Chavarria said to FashionUnited. "I grew up poor and it represented something that symbolized what we wanted to be. You'd save up to go buy a polo shirt and you'd pair that with clean white K-Swiss. I'm using that as a way to shine light on the beauty of Latin American immigrants that come from Central and South America." Chavarria also has a partnership in conjunction with K-Swiss and Kids In Need of Defense where they are sponsoring footwear for immigrant children who need shoes. 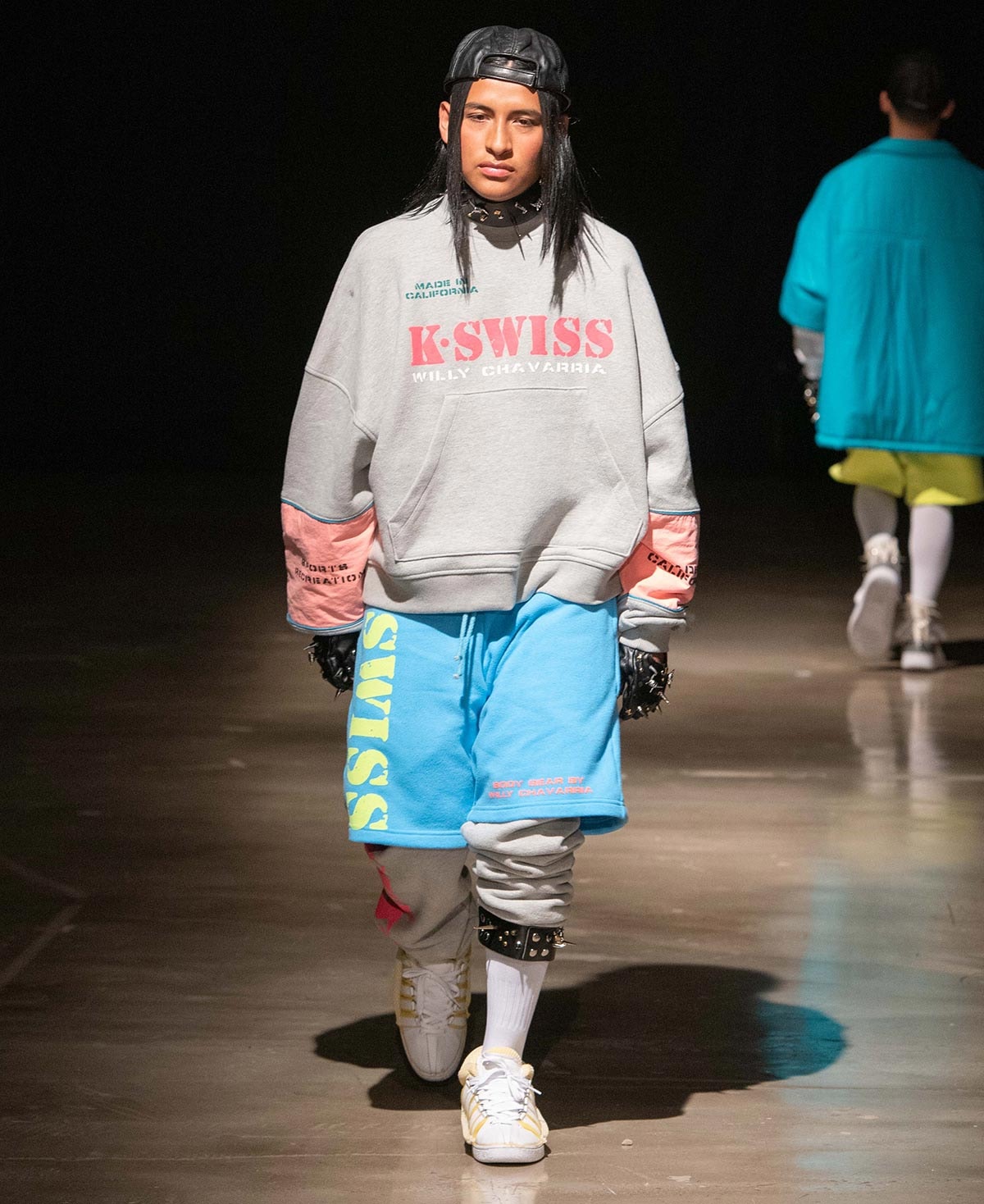 To emphasize his message about the beauty of Latin American culture and immigration, Chavarria cast models who were either immigrants or first-generation Americans. "Every collection I do is inspired by what's happening in the world right now," Chavarria said to FashionUnited. "What's going on right now is unspeakable. Everyone needs to see these people, my people, being beautiful and strong. I'm a biracial person, I'm half-Mexican and half-white, but I speak for my Latino community, and I want to show them in this great light. 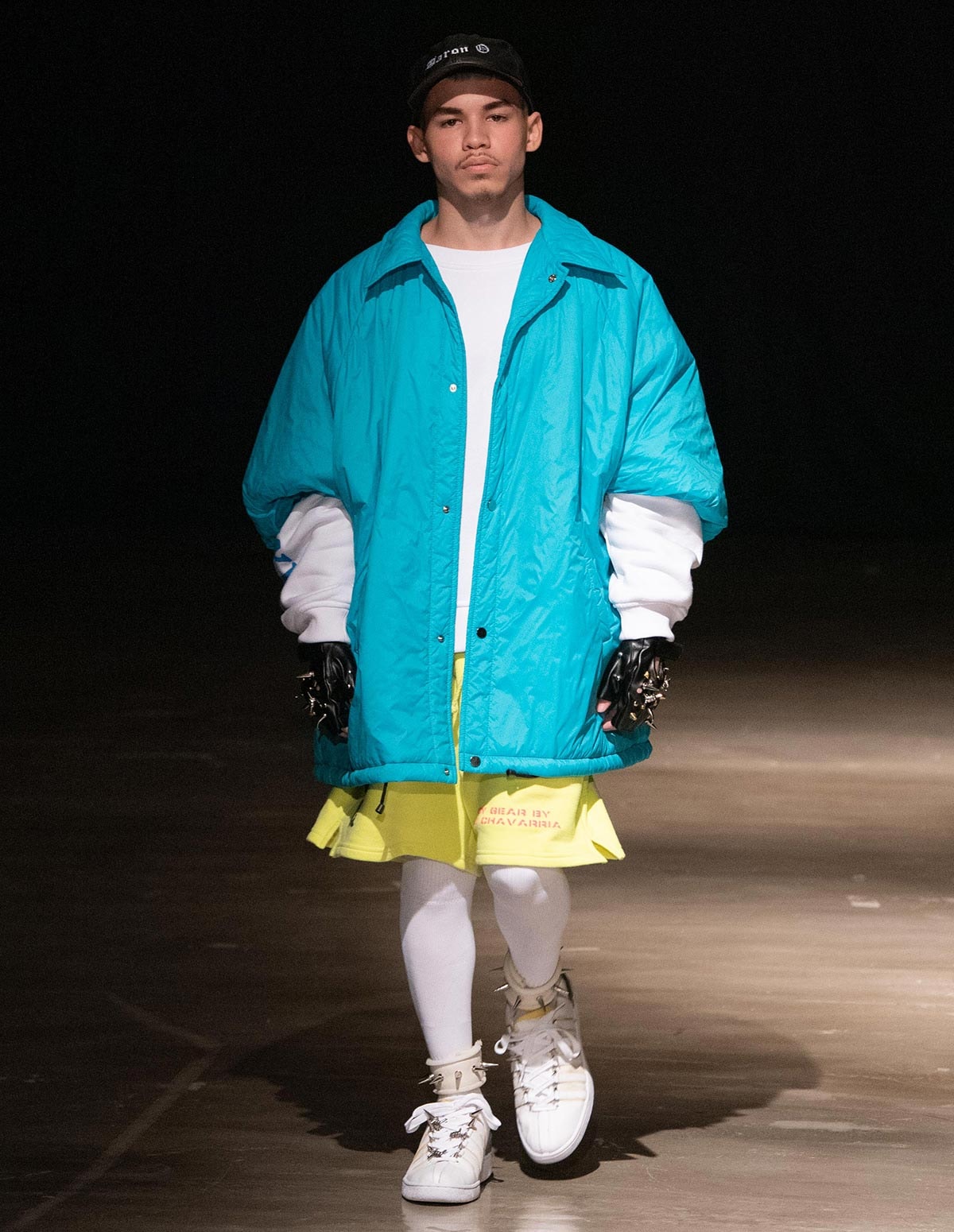 The primary color palette for the collection was black, with other neutral colors like white, beige, and brown included. Denim was a focal point of the collection with wide cut silhouettes that helped further the 90s urban feel of the collection. The sportswear done in collaboration with K-Swiss brought some color to the collection with jackets and shorts feature in teal, peach, lime green, and electric blue. The power in Chavarria's political messaging never goes lost and continues to be noticed.