Zara debuts ‘ungendered’ collection - but why so boring?

London - Gender neutral fashion seems to be a hot topic lately, Louis Vuitton styled Jaden Smith in a skirt for its womenswear campaign and brands such as Rick Owens and Vetements are continuing to push gender fluidity into fashion, and now it seems high street giant Zara is getting in on the act with its new ‘ungendered’ collection nestled under its casual, more affordable TRF range.

I applaud the high street chain’s idea to be progressive, to help break down the idea of gender that isn’t just as simple as male or female, but why then did they decide that ‘ungendered’ translated into boring? The collection, which actually launched last week with no fanfare, consists of T-shirts, tops, hoodies, shorts, jogging trousers and jeans, all of which are in plain grey, white and navy colours. 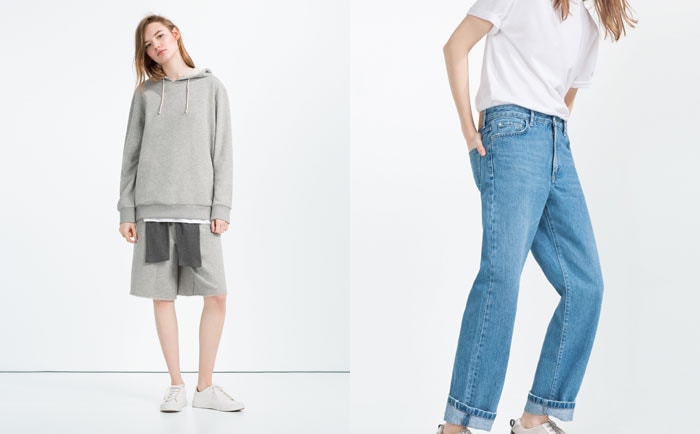 Now is this genderless or just unisex? Yes, the collection has been modelled by both a male and a female on the retailer’s website, and yes I can see that it can be worn by any gender, what I don’t understand is why genderless equals cosy, loungewear that’s minimalistic and masculine. Is it really an attempt to produce a genderless collection or just an on trend rebranding of its unisex basic clothing line, which might I also add American Apparel has been selling for years.

The news of the collection has been hit with some criticism, mainly for its lack of style and originality, where are the bold pieces, the items that do push boundaries - this collection is just clothing that has been worn by men and women for decades. It isn’t as though Zara has produced a skirt for women and men, or decided that its floral blouse could cross genders, I don’t feel like it is a major step away from traditional binary offerings, but what the collection is doing is putting a spotlight on the gender conversation.

If Zara actually wanted to release an 'ungendered' clothing line they could just take the words 'men' and 'women' off their current lines.

I know the high street chain isn’t the first, designer brands including Rick Owens, Vetements, Saint Laurent, Jean Paul Gaultier, and J.W Anderson have been pushing genderless fashion, and recently Gucci under the creative directorship of Alessandro Michele sent male models down the catwalk in pussybow blouses. Even last year, Selfridges introduced a pop-up called Agender, showcasing a gender-neutral store. However, Zara is an influential mainstream retailer in the affordable fashion sector and it will be interesting to see whether its consumers buy into the gender-neutral clothing.

Maybe the introduction of the conversation to mainstream fashion will see other retailers come on board with bolder style options to appeal to gender fluidity in fashion. This collection for me seems more unisex than genderless, and more of a stunt surround the name than about highlighting the conversation, but surely all talk on the subject can only be a good thing, right?