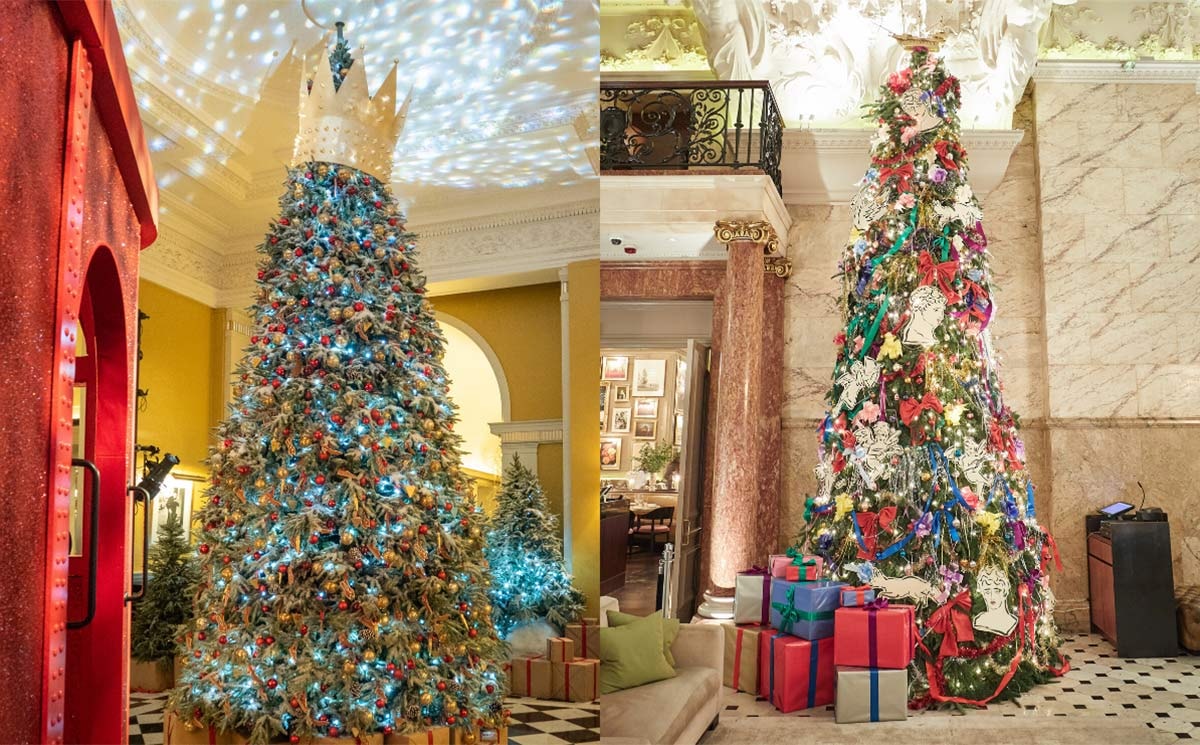 While the retailers have been embracing festive collections and displays in the run-up to Christmas, luxury brands and designers have also been getting in the Christmas spirit by designing Christmas trees and immersive experiences for hotels, restaurants and shopping areas, from the highly anticipated Claridge’s tree which has been designed by Christian Louboutin to the Aqua Shard’s art-Deco inspired tree by Scottish fashion designer Holly Fulton.

London hotel Claridge’s has made a tradition of asking a fashion designer to put their own twist on the Christmas season and has seen them collaborate with Karl Lagerfeld, Christopher Bailey, and Alber Elbaz, and this year they teamed up with luxury footwear designer Christian Louboutin, who has not only designed a Christmas tree but also an immersive installation including The Loubi Express glittering red locomotive. 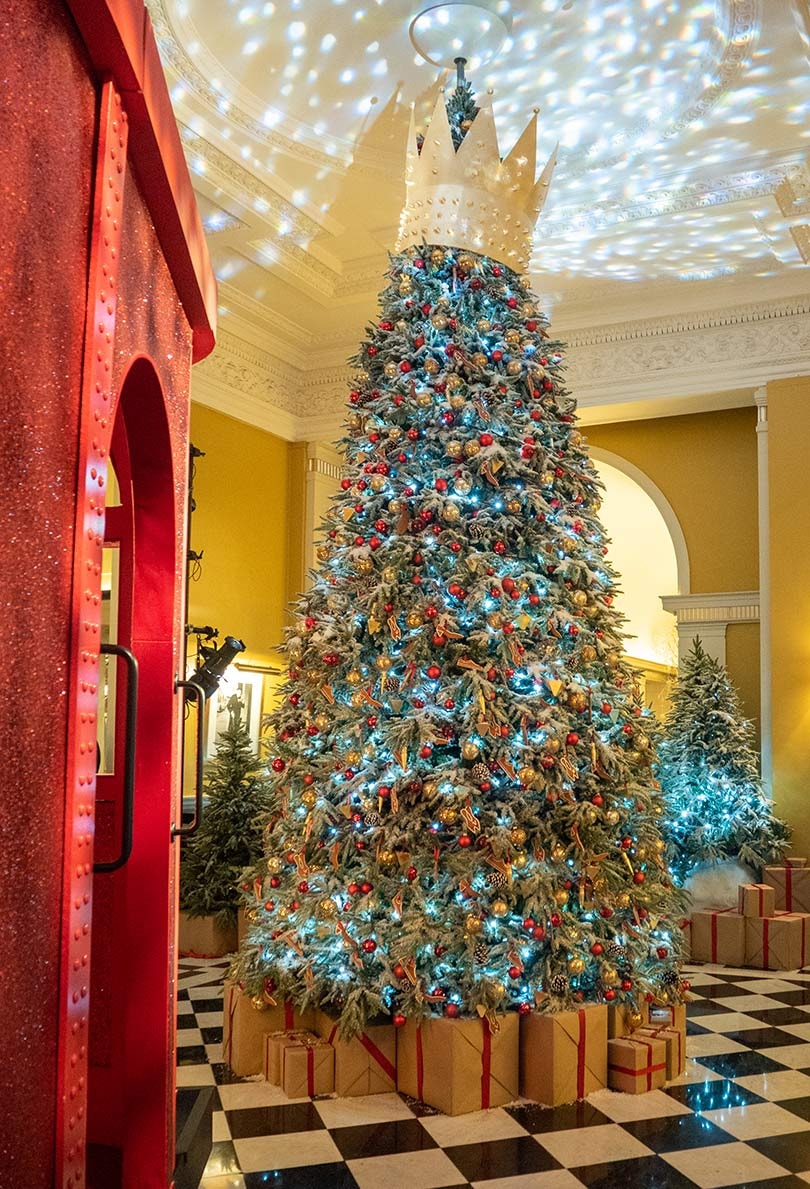 Christian Louboutin’s unique installation marks the 10th year of this creative collaboration between a visionary designer and Claridge’s, which started in 2009, with John Galliano then at Dior, who designed the tree for two consecutive years. Galliano's creations were followed by Alber Elbaz for Lanvin in 2011, Kally Ellis of McQueens in 2012, Dolce and Gabbana decorated the tree in 2013 and 2014, followed by Christopher Bailey and Burberry in 2015, in 2016, the tree was led by Apple's chief design officer, Sir Jony Ive, then Chanel’s creative director Karl Lagerfeld designed a sixteen foot high inverted tree, and last year Diane von Furstenberg showcased ‘The Tree of Love’ decorated with over 8,000 hand-painted silver-leafed leaves, glass spheres and 150 hand-blown glass hearts.

For 2019, Louboutin captures the “glamour, romance and timeless traditions of Christmas” with an immersive installation that invites guests on a journey, through the lobby that has been transformed into a frosted forest. At its heart is a traditional tree in gold and red, dressed with fairy lights and gingerbread stilettos, topped with a gold-leaf crown.

Alongside the impressive tree is the Christian Louboutin's 'Loubi Express’ stationed in the lobby, featuring a dining carriage complete with four tables, its very own cocktail conductor offering champagne, cocktails and canapés complete with a nostalgic Christmas soundtrack. 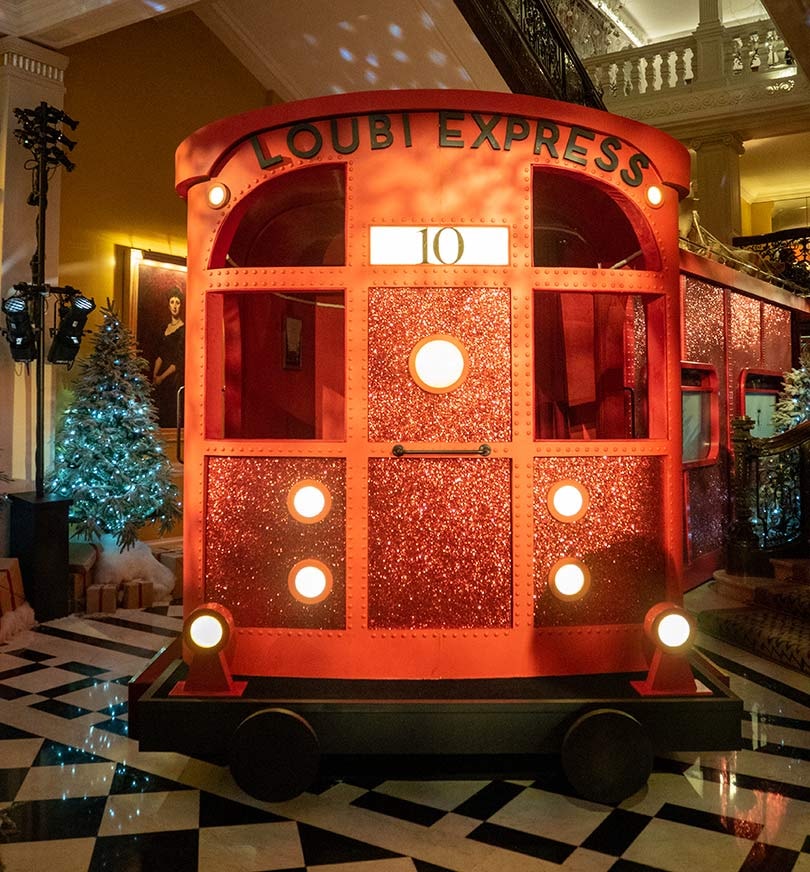 Commenting on his design, Louboutin said in a statement: “I wanted to bring a little bit of Paris to London, and for this year’s design to capture the excitement of journeys, whether to new destinations or homecomings.

“There is something nostalgic about travelling by train that reminds me of grand adventures and journeys home. Trains allows you to dream, to contemplate the landscape flying past and to get a little respite from the hectic pace of life. That feeling is something I wanted to recreate.” 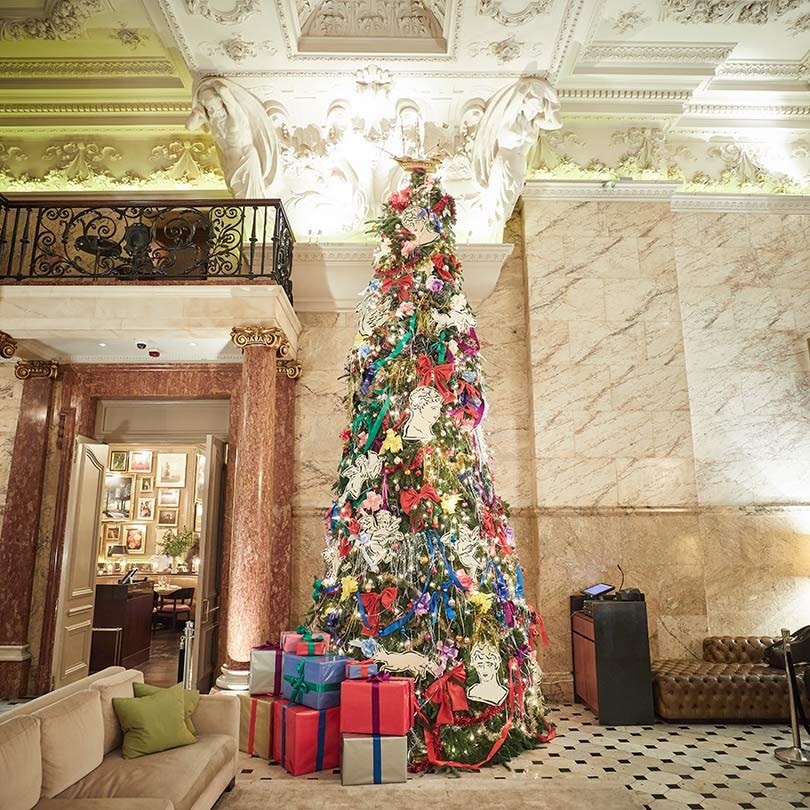 This festive season, luxury hotel The London Edition has collaborated with British artist and designer Luke Edward Hall on a six-metre-tall showstopper that offers a playful take on the traditional Christmas tree, complete with hundreds of colourful lights, vintage baubles and oversized decorations.

The tree was created by florist designer Mark Colle and then draped in baubles, tinsel, bows and lights - as well as Luke Edward Hall's own signature illustrations. The tree is topped off with a weighty golden galleon.

Commenting on his Christmas tree design, Hall said: “My Christmas tree for The London Edition is a riot of colour and theatrical ornament which I hope will invoke the joy of Christmas in all its glittery, shimmering wonder.” 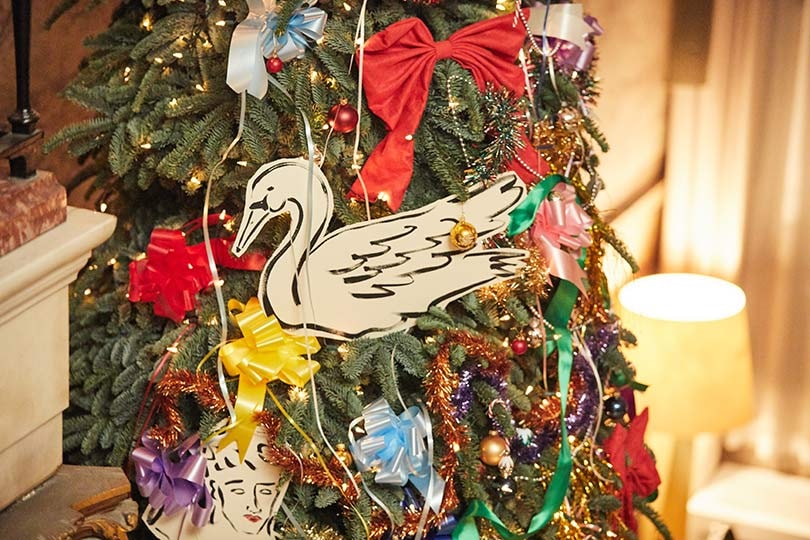 Images: courtesy of The London Edition

Scottish fashion designer Holly Fulton has teamed up with Aqua Shard this year to create an Art-Deco inspired Christmas Tree inspired by 1920s glamour, as well as more traditional Christmas motifs, to create the ‘DecoDance’ featuring her whimsical sketches juxtaposed with the modern architecture of the restaurant and bar. 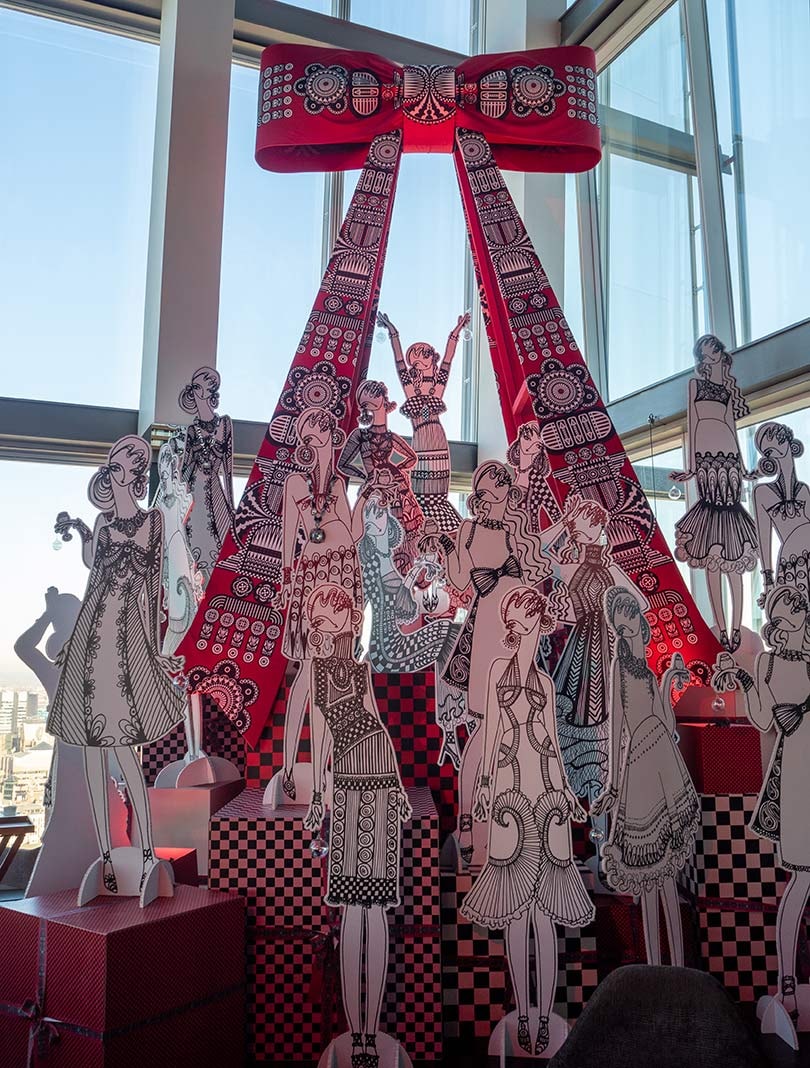 Standing 6 metres above ground in the restaurant’s three-storey atrium, Fulton’s grand yet delicate design incorporates her own designs and a traditional festive bow, drawing inspiration from the playful aesthetic of legendary Busby Berkeley’s musical production numbers from the Roaring Twenties. Fulton’s iconic sketching style is brought to life in the form of glamorous ‘ladies’ positioned on beautifully wrapped Christmas presents along the bottom of the tree, while toasting the season with Veuve Clicquot Champagne glasses in hand.

Speaking about the collaboration, Holly Fulton said: “I am delighted to have collaborated with aqua shard on their festive installation and to have the opportunity to merge my style with such an iconic and unique space. I wanted to create a playful and glamorous feeling to the design, using a monumental bow to anchor the bevy of partying beauties revelling at its base.

“The title DecoDance encapsulates the decadent party spirit and also gives a nod to the Art Deco inspiration behind my design.” 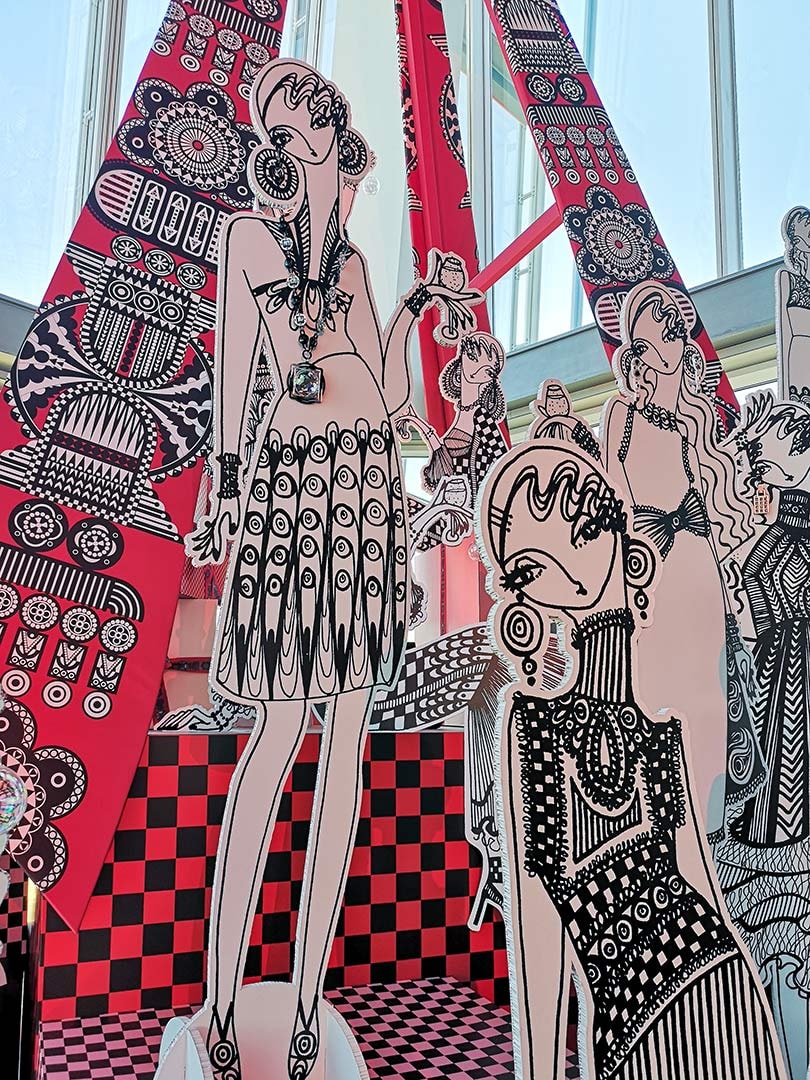 The Lanesborough Hotel has been inspired by couture fashion house Ralph and Russo for its Christmas tree installation this year, with floral creative Tony Marklew taking inspiration from the label’s intricate detailing portrayed in its autumn/winter 2019 couture collection. 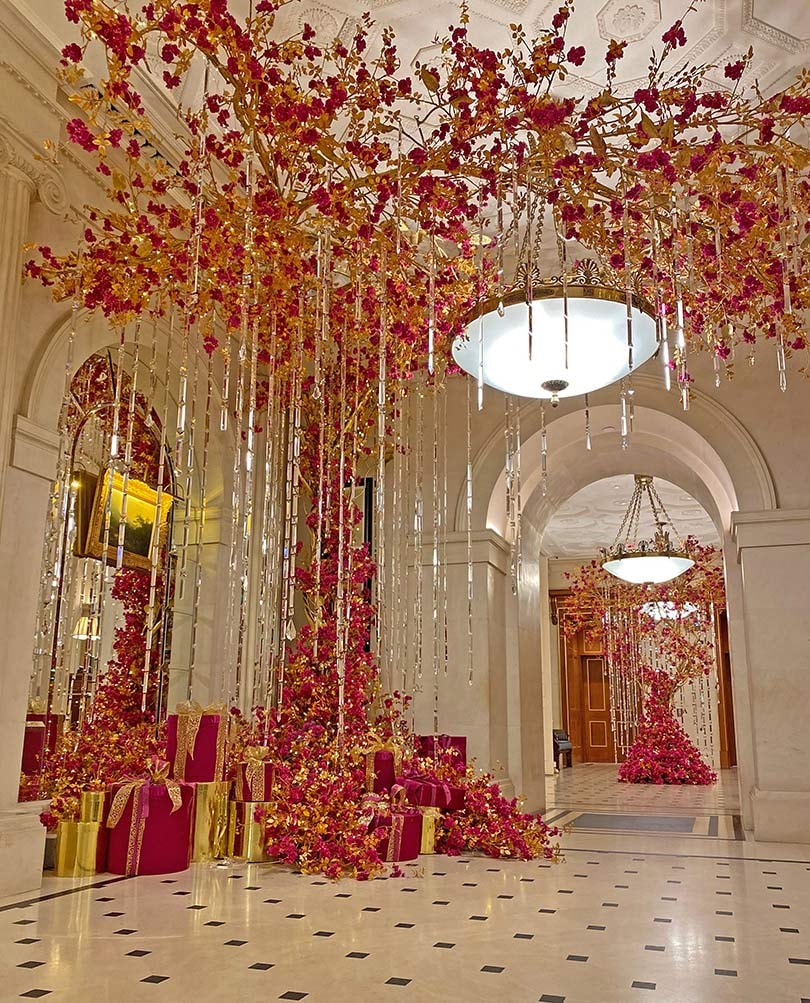 The festive pink artistic installation brings to life the magic of couture with a canopy of chandelier-like crystals and ornate leaf embellishment, adorned with silk petal flowers in bold hues of raspberry and ruby red.

Creative director of Ralph and Russo, Tamara Ralph, said of the Christmas display: “With couture there’s always a thread of magic in every piece, and we’re delighted this holiday season to bring that spirit to the hotel and celebrate with all who visit The Lanesborough.”

The collaboration also included a hand-crafted a bespoke collar for The Lanesborough cat resident, Lilibet, bearing the crown sigil. 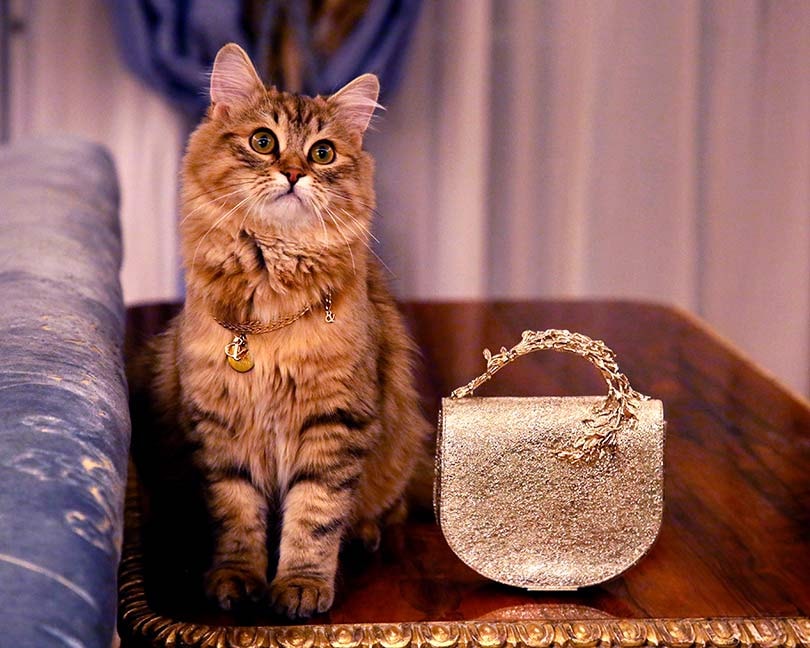 Tamara Ralph added: “Having recently become a proud pet owner myself, I’ve experienced first-hand how quickly they become a part of the family and so with Lilibet being such an integral part of The Lanesborough, it felt only natural to ensure that she was included in the festivities.” 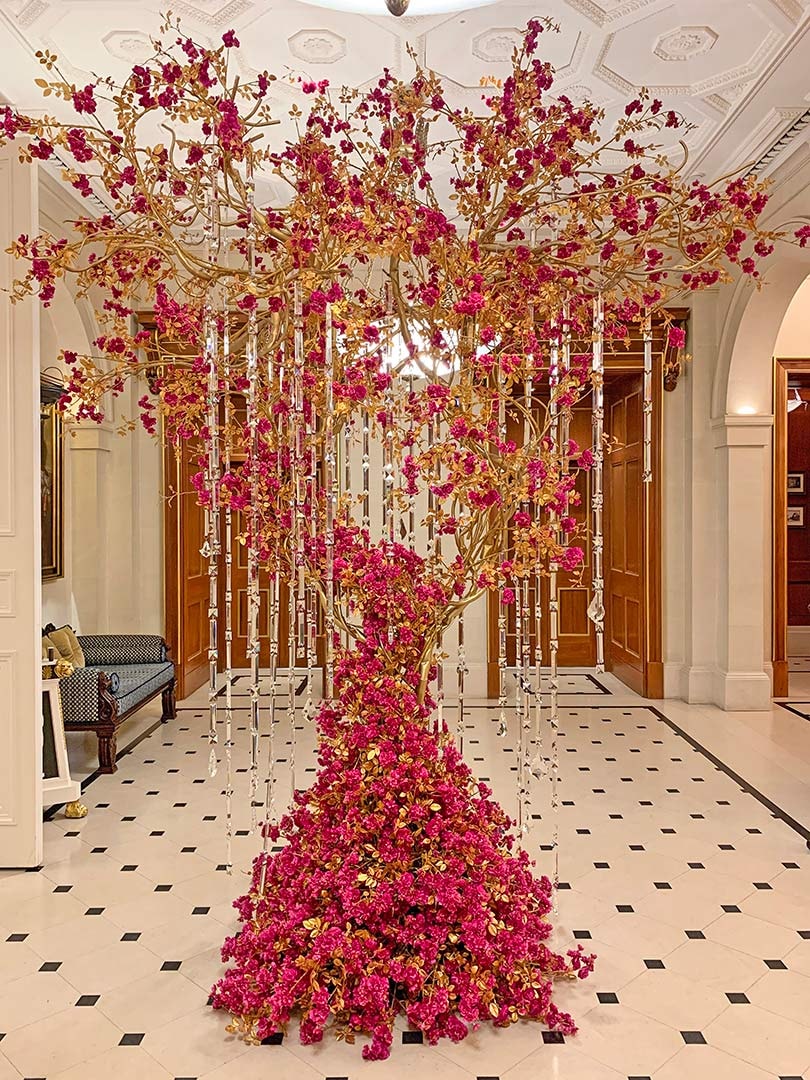 Images: courtesy of The Lanesborough

Covent Garden has brought a number of its retailers together to create the ‘Wonder Wood’ an enchanting Christmas tree forest with trees designed by Miller Harris, Olivia Burton, For Art’s Sake, Balthazar, Petersham Nurseries, Royal Opera House, and Huda Beauty each brand bringing their own signature style to the Covent Garden Piazza. 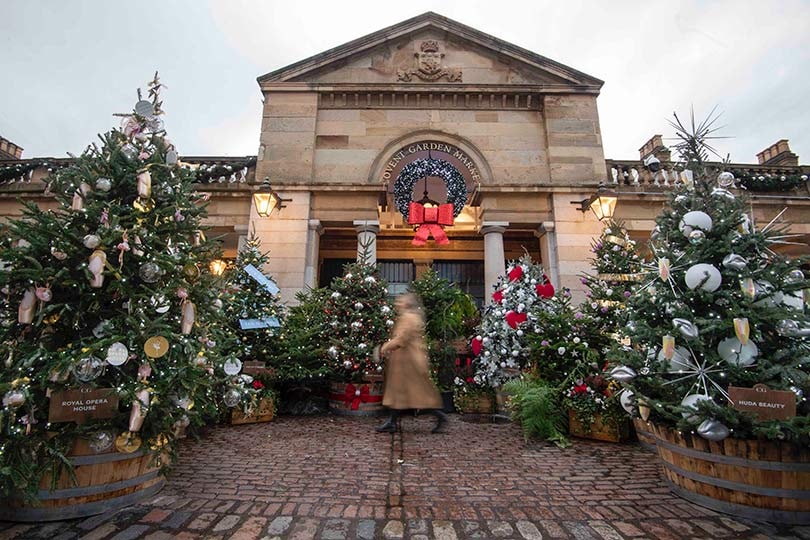 One of the standout trees is by jewellery brand Olivia Burton which has adorned the fir tree with its favourite colours of blue and pink, echoing the decorations inside their Covent Garden store, complete with gold stars, while Huda Beauty, which has a pop-up store nearby has taken inspiration from her latest collection, Mercury Retrograde, with hanging crystals and silver lips, and the Miller Harris Christmas tree features their signature silk scarves tied perfectly into bows with neon tinsel and bottle decorations.

Covent Garden also has a one-of-a-kind scented interactive winter wonderland experience with Tiffany and Co. filled with sparkling snow, a festive ice-skating rink and fragrance pop-up shop, amid the backdrop of iconic Tiffany Blue boxes, and with Tiffany and Co.’s signature, Eau de parfum diffused into the air. 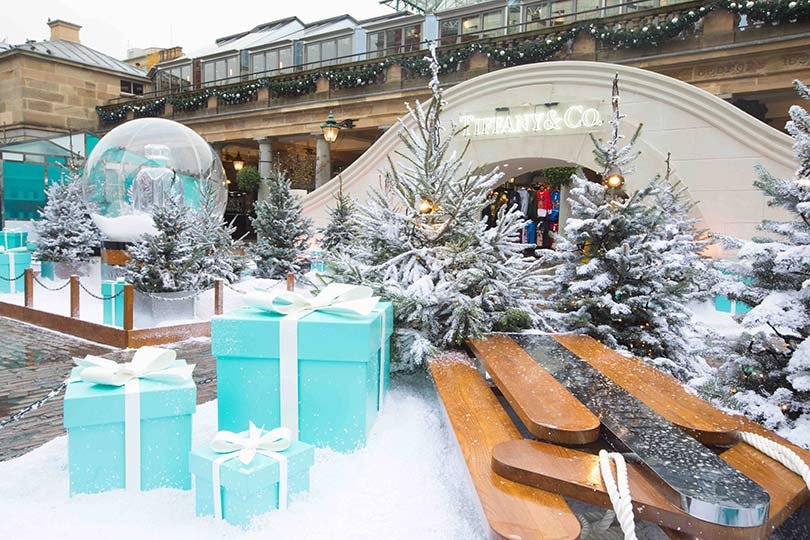