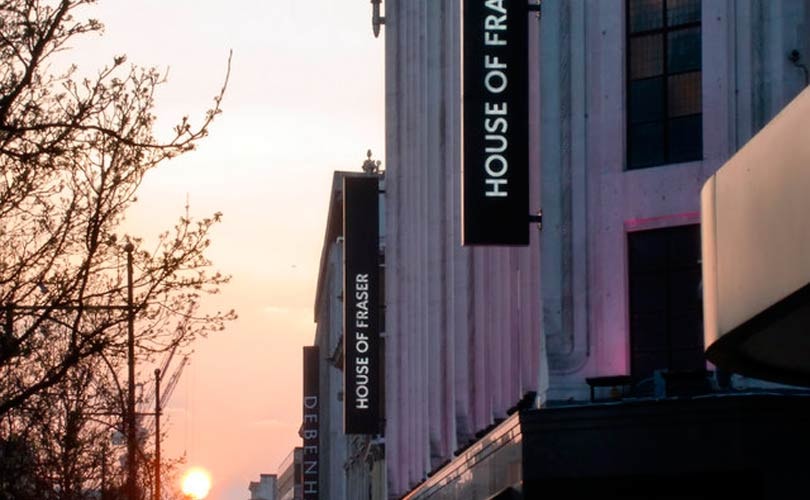 Struggling department store group House of Fraser confirmed it is set to shut 31 of its 59 UK and Ireland stores, affecting 6,000 jobs, as it shares the details of its Company Voluntary Arrangement proposals (CVA).

HoF confirmed it filed its plans in court on Wednesday, June 6 with the Court of Session in Edinburgh, in line with its conditional agreement with C.banner, who is set to acquire a 51 percent stake in the group. Following the deal, the new majority stakeholder intends to introduce significant new capital to House of Fraser.

The announcement comes as House of Fraser restructures its overall business, as without a new business scheme the department store group "does not have a viable future." The 31 stores earmarked for closure were selected following a comprehensive review of HoF's entire property portfolio and sees the group decrease its estate to 28 locations.

"Our legacy store estate has created an unsustainable cost base, which without restructuring, presents an existential threat to the business," said Frank Slevin, Chairman of House of Fraser on its CVA proposal "So whilst closing stores is a very difficult decision, especially given the length of relationship House of Fraser has with all its locations, there should be no doubt that it is absolutely necessary if we are to continue to trade and be competitive," he added. Key stores identified for closure under the CVAs include House of Fraser's iconic flagship store on London's Oxford Street, Edinburgh Frasers and its flagship store in Birmingham.

Open the menu by clicking the button in the top left of the menu or click on the icons in the map to learn more.

The CVA proposals also include plans to relocate House of Fraser's head office and the Granite House office in Glasgow to a new location, in order to help reduce costs. House of Fraser added that it has held "constructive initial discussions with landlords and other key stakeholders." Pending approval of its CVAs HoF expects all 31 stores earmarked for closure to remain open and trade as normal until early 2019.

"We, as a management team, have a responsibility to take necessary steps to ensure House of Fraser’s survival, which is why we are making these proposals," said Alex Williamson, CEO of House of Fraser. "I would like to offer my heartfelt thanks to all my colleagues at House of Fraser for working tirelessly throughout this difficult period. We are fully committed to supporting those personally affected by the proposals," he added.

If House of Frasers CVA is approved, up to 2,000 House of Fraser employees and an additional 6,000 brand and concession partners will be affected. HoF stressed that those set to be impacted by the prosed changes have already been informed. The consultation of House of Fraser's CVA proposal will take place over the next 17 days, with the department store group seeking approval from its creditors on June 22. House of Fraser stresses that business will continue as normal through both its stores as well as online during this period.

"Ultimately, it will be for individual creditors to decide how they will vote on the CVAs," continued Slevin. "We believe the proposal has sought to find a solution that is fair for all parties, enabling us to secure vital new capital from C.banner. Our immediate focus is on our colleagues with whom we are communicating openly and supporting at this time."

Will Wright and Robert Croxen from KPMG LLP were appointed as Nominees to the CVAs.