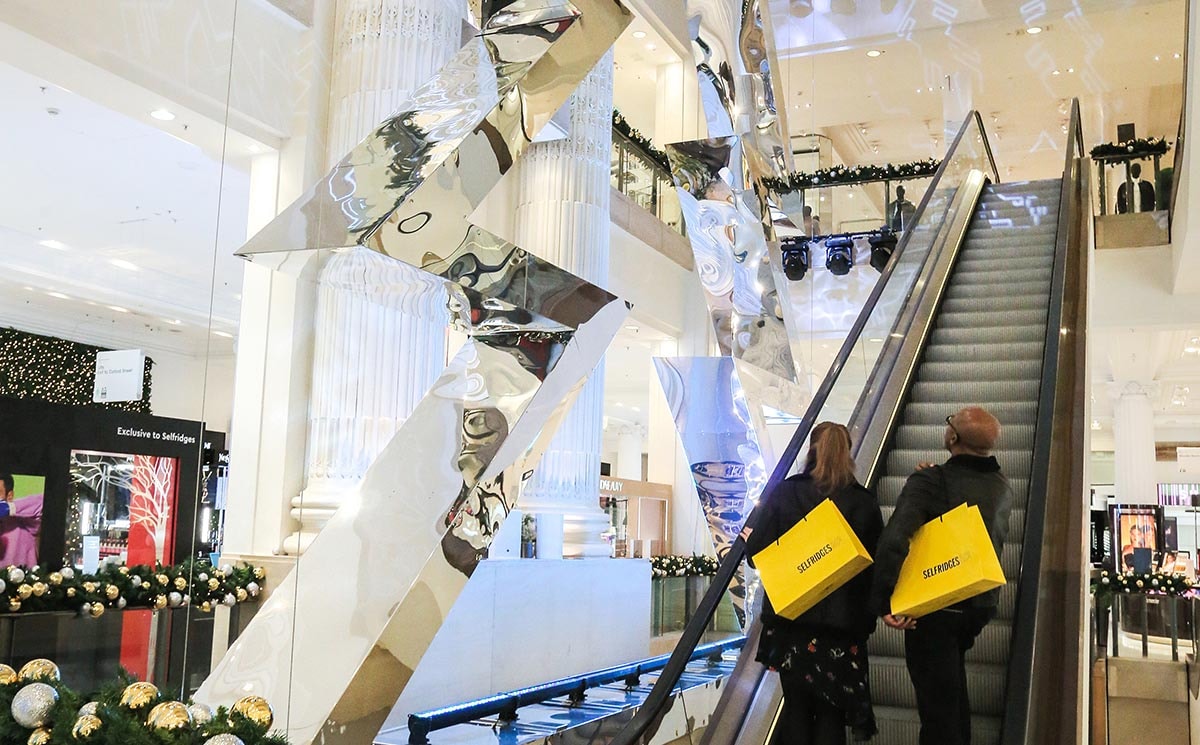 Selfridges has unveiled its Christmas theme, ‘A Christmas For Modern Times’, to make it the first luxury department store in the world to present its in-store displays and windows for the holiday season, across all of its stores in London, Birmingham, and Manchester. 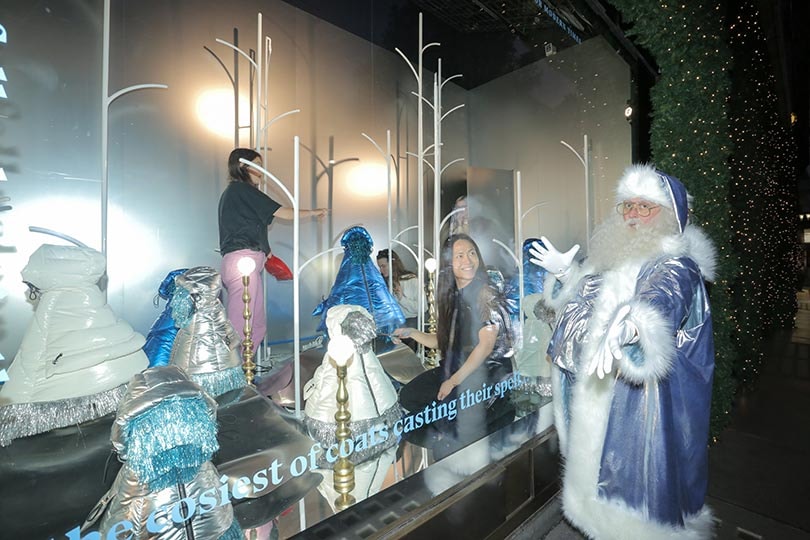 For 2019, Selfridges is sharing its futuristic vision of Christmas with a “future fantasy” theme that rethinks traditional, beloved festive stories and re-tells well-known fairytales through a “modern lens” in what it calls a display for the “next generation Christmas, an interplay of old and new”. 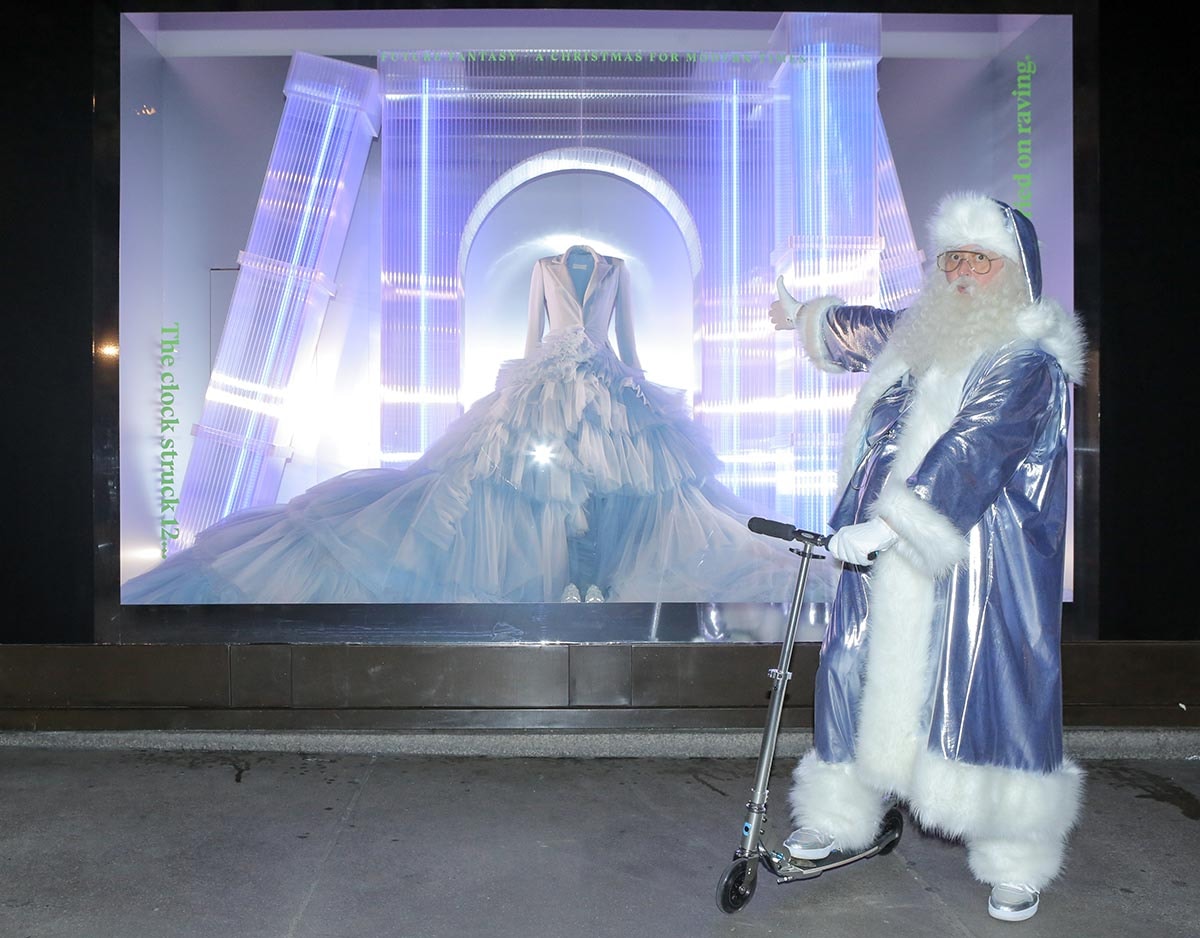 Each window at its Oxford Street, London store is either an symbolic representation of a well-known fairytale, such as Cinderella, Jack and the Beanstalk, Goldilocks and Rapunzel, or features one particular iconic element from one of them, showcasing a “futuristic aesthetic treatment and a softer magical narrative”. 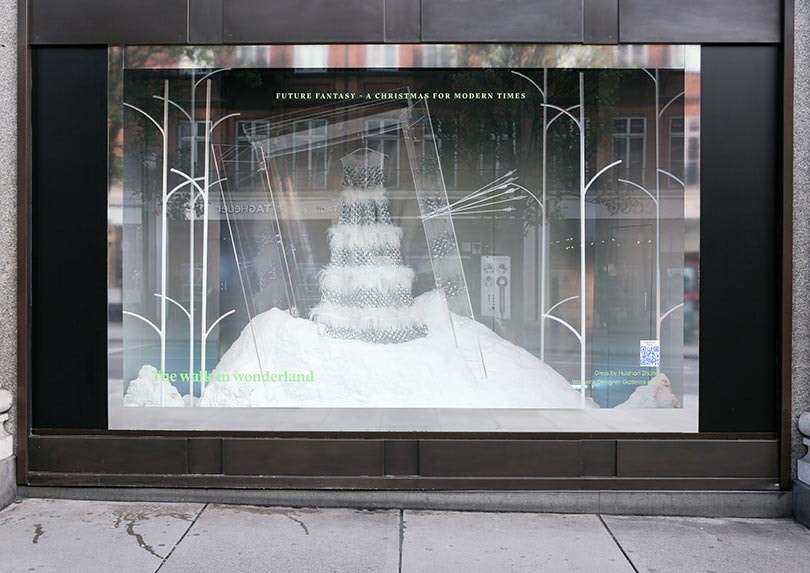 Selfridges London's biggest triple-sided window at the corner of Oxford Street and Orchard Street features a magical shipwrecked feast amongst the waves, with giant magical moon and moving boat and oars, reimagining the boat scene from The Owl and The Pussycat. 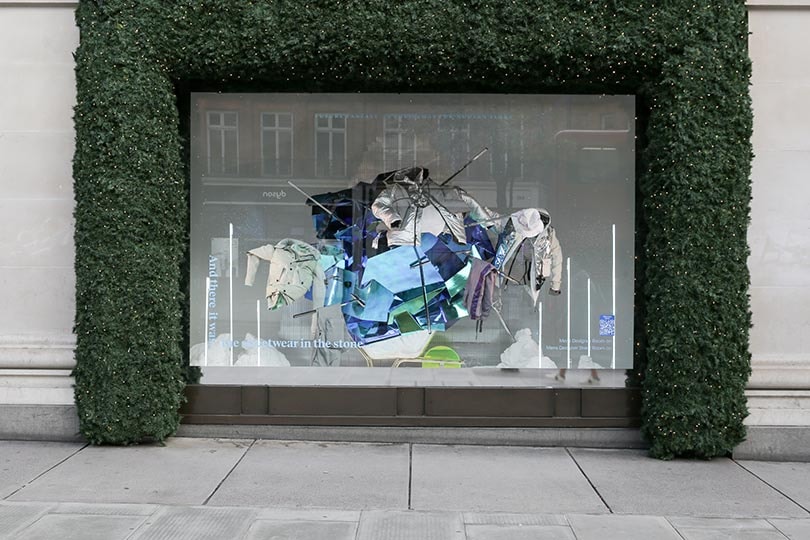 Other key windows include a magic translucent wardrobe, featuring everything princess would want to wear, set in a snow mound with ice and futuristic trees, while a magic mirror scene showcases interactive content of models walking through a future fantasy landscape, bringing the latest looks to life digitally, and a window dedicated to Cinderella features an impossibly large and dramatic gown by Christian Siriano spilling out of the translucent arches of the palace ballroom. 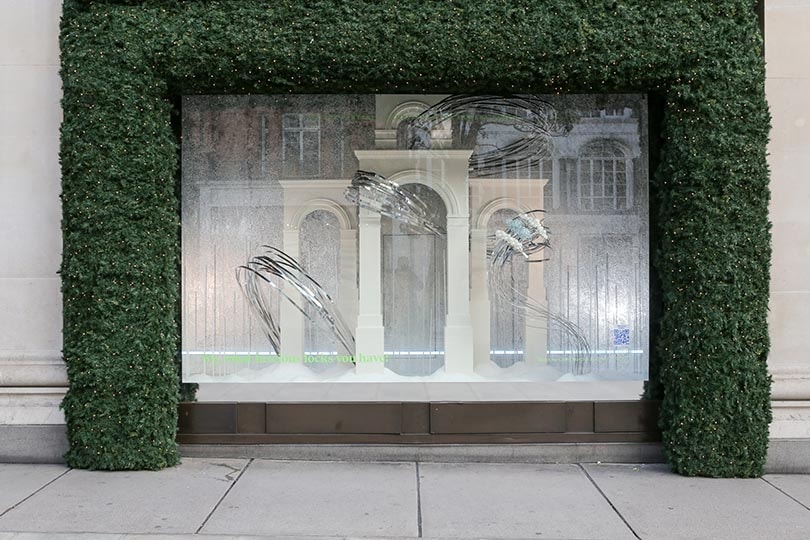 There is also a window created in collaboration with Simone Rocha, featuring Rapunzel’s tower, made out of an icy structure, with hair strands made of aluminium. and specially created giant pearl Rocha hair slides for Rapunzel’s hair, weaved through the arches of the tower, while the forest creatures scene delves into future fantasy fashion with bespoke jackets by Nicole Benisti. 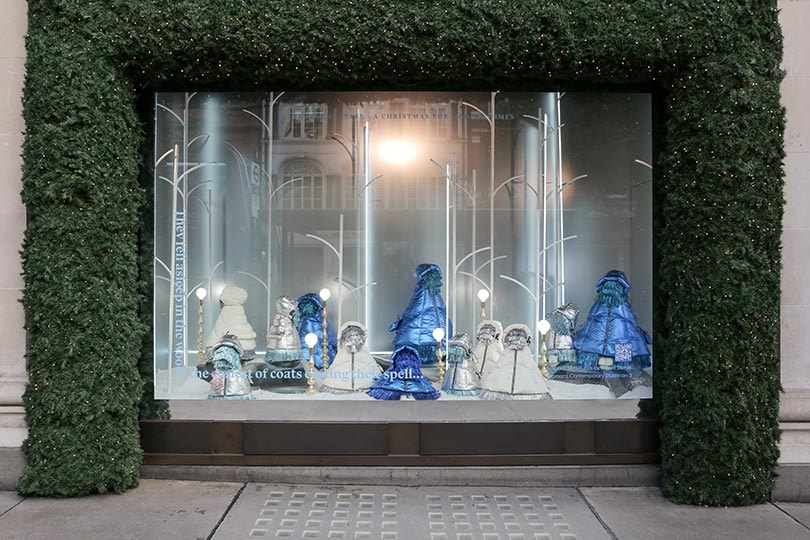 The overarching colour palette of the windows and in-store displays explore silver, white, blue and green along with mirror, crystal and transparency, and features more than 85,000 Christmas baubles, with many reused from existing displays, explained Selfridges, as well as over 15,000 metres of LED lights decorate the dense spruce foliage and handrails inside and outside the London store. 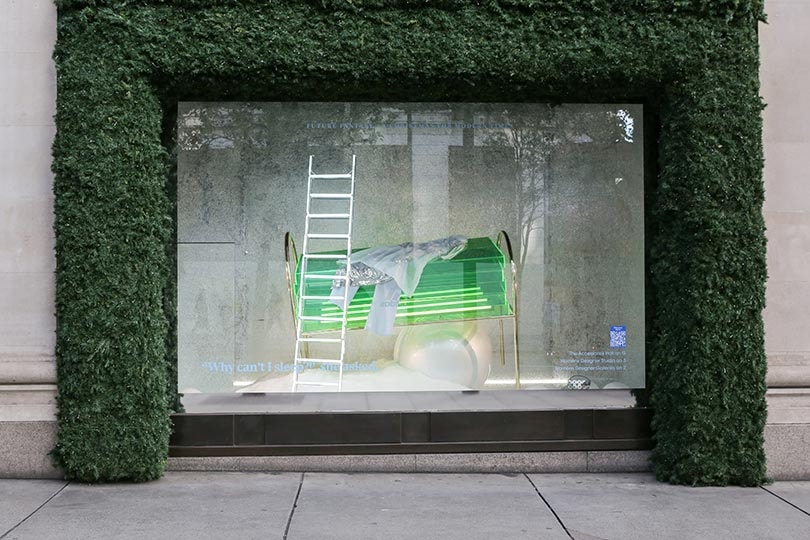 Inside the London department store, a 13 metre high mirrored Christmas tree hangs in the central atrium, which will come alive through a “dazzling lighting show” projected on its surface, and even Santa Claus has had a makeover, his red suit is gone and replaced with a metallic silver one. 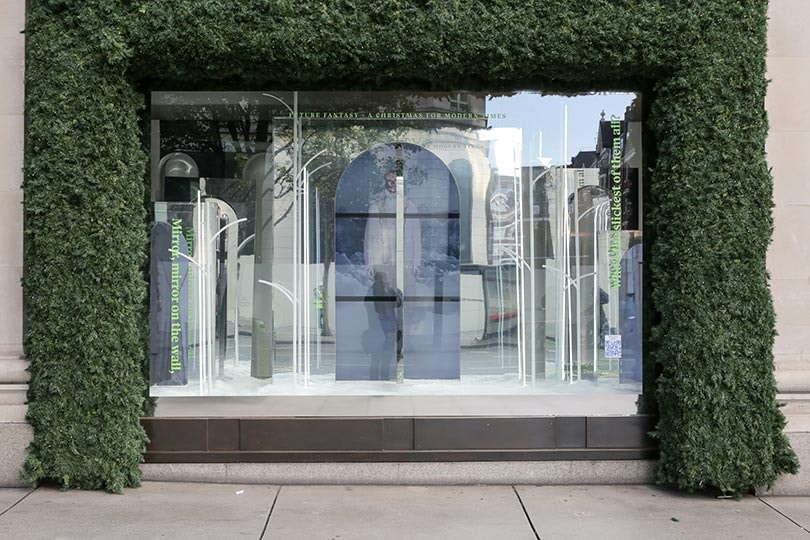 At the London store alone, it has taken a multi-specialist team of 100 people more than 500 hours to produce, working non-stop rotated shifts for the past 10 days. In total, across all Selfridges stores and online it has needed a 500 strong team. 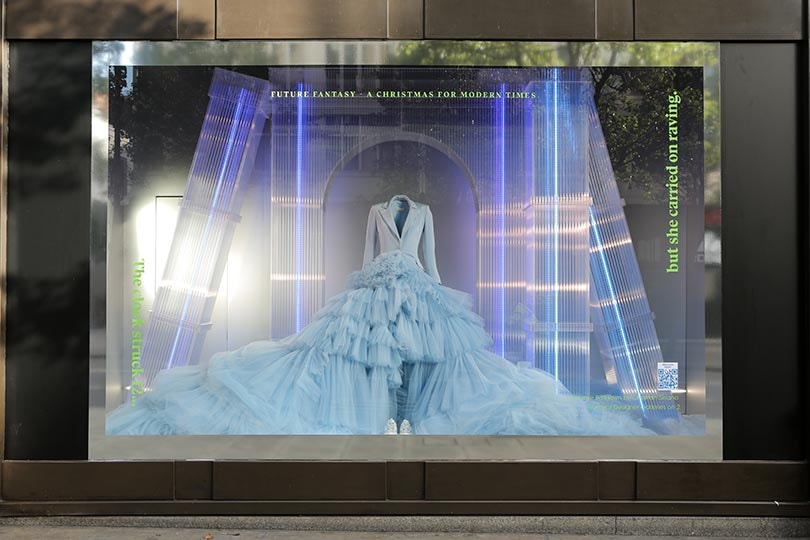 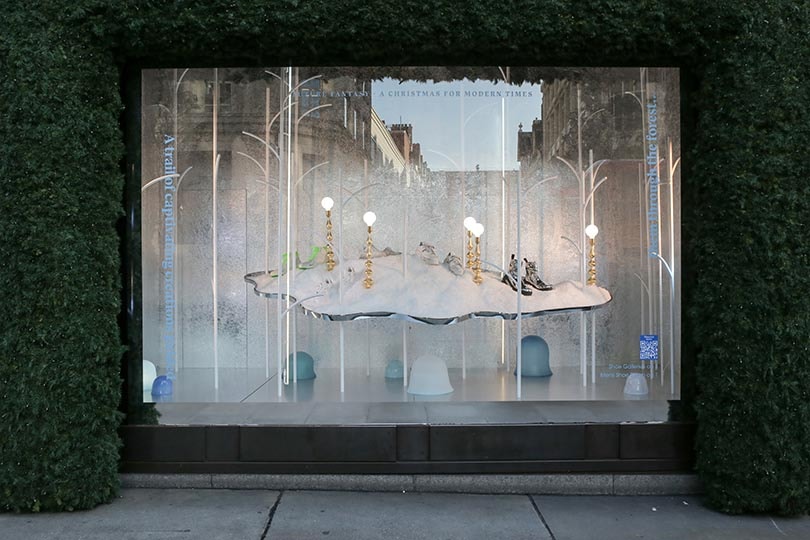 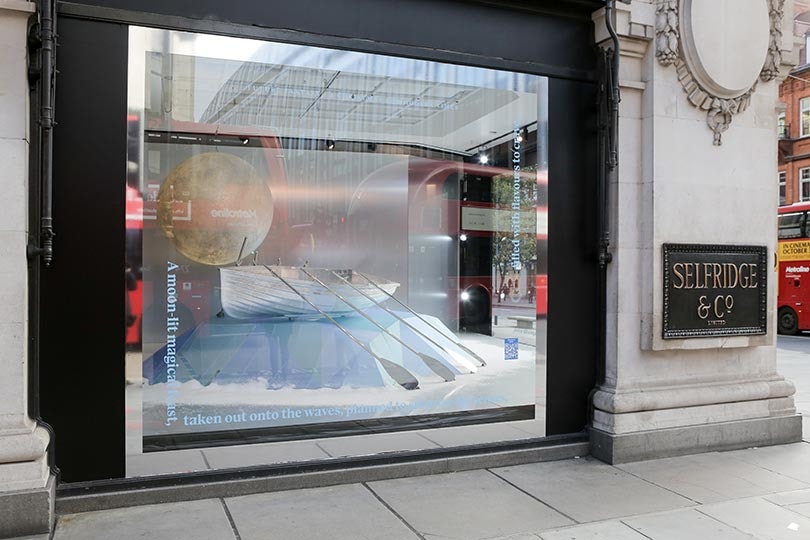