Is bigger better? It certainly seems to be for a number of international retailers, with leading fashion conglomerate Inditex announcing the acquisition of a 4,400 square meter commercial location in the heart of Soho, New York.

The Spanish company aims to open "a global standard-setting Zara store" at the landmark building on 503-511 Broadway, in Manhattan. The new global flagship store signifies Inditex's interest to expand its brands presence in the US market, following a series of recent flagship openings. The group reportedly invested 280 million dollars in the new property, although its overall store strategy remains focused on leasing properties and enhancing its integrated store and online sales model.

"This opening marks a very significant milestone in the Group's US growth strategy," commented Inditex Chairman and CEO Pablo Isla. "The growth model for the US market consists of a combination of flagship store openings and online sales growth underpinned by strong support from American shoppers; this acquisition dovetails perfectly with this strategy."

The global flagship store is set to open its doors at the end of 2015, but in the meantime Zara aims to open an additional flagship store, with retail space of over 2,800 square meters, located at the World Trade Center, in Manhattan this spring. The Spanish company has also refurbished and expanded its store on Fifth Avenue at 42nd Street, which is set to re-open this spring with a floor area of over 4,000 square meters. 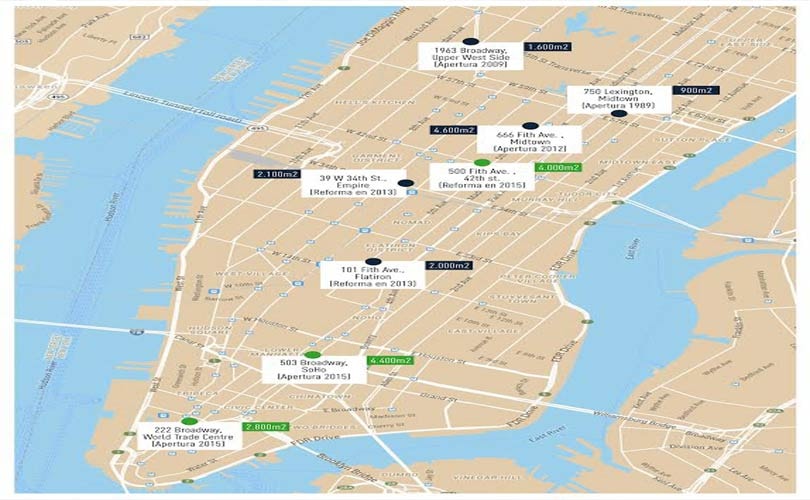 Zara aims to have eight stores in Manhattan by the end of 2015, as well as seven in the larger metropolitan area. However, Inditex's future vision of the US market is not solely limited to New York; the company plans to open over a dozen new Zara stores in major cities such as Las Vegas, San Diego, New Jersey, Los Angeles, Boston, Houston, Dallas, Chicago, Seattle and Puerto Rico throughout 2015.