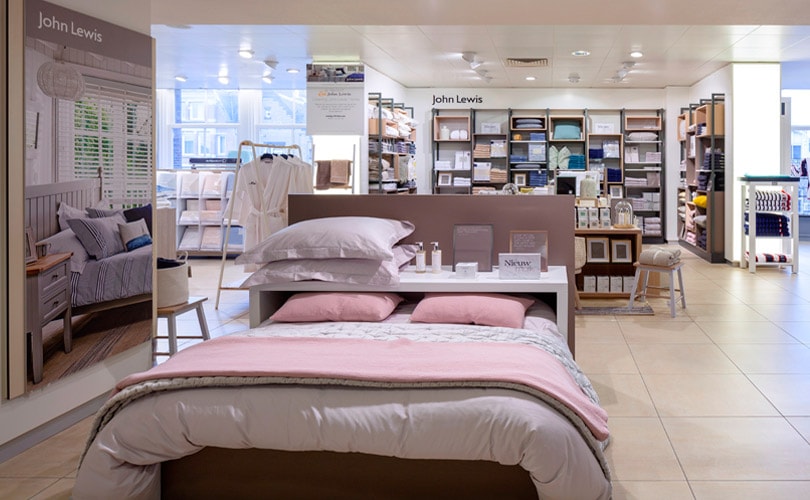 John Lewis has finally landed in Europe - albeit in a slightly more edited and 'capsule' format. The British department store group has opened its first shop-in-shops with its debut European partner, de Bijenkorf in Amsterdam, Den Haag and Rotterdam, the Netherlands. Through its exclusive partnership with the premium department store group, John Lewis will offer its home-brand of lifestyle and homeware products in seven stores throughout the country. FashionUnited attended the launch of the shop-in-shop in Amsterdam to learn more about John Lewis's European foray and focus. 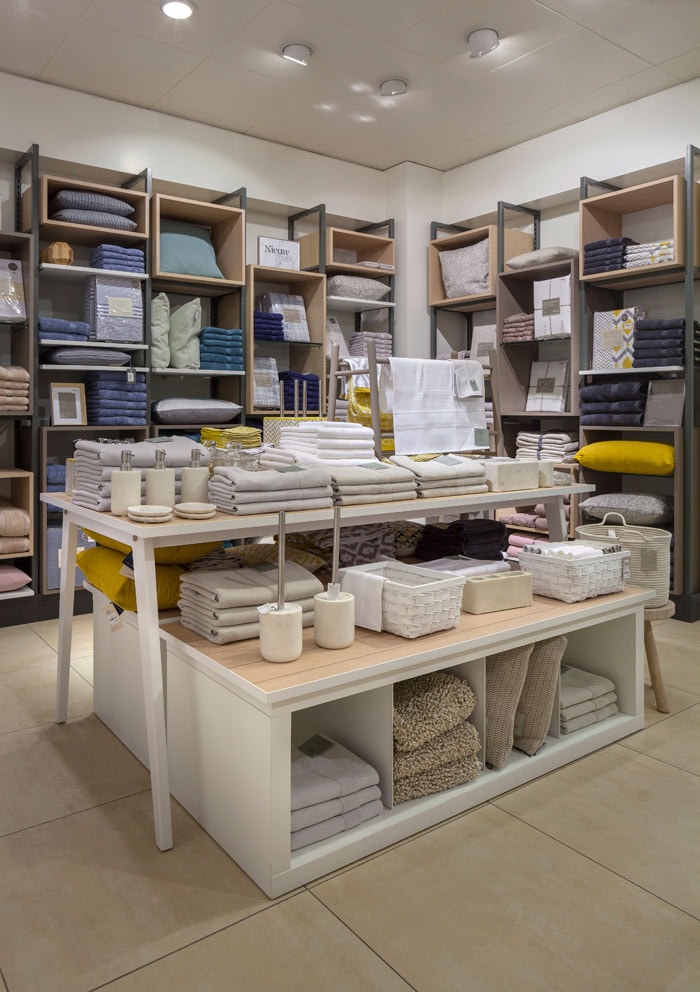 "We have essentially selected what we believe is to be the best of our brand and put together a wholesale collection of 2,000 items," explained Katie Jordan, Head of International Development to FashionUnited. "Then our wholesale partners helped us develop, through close collaboration, an assortment of the best of our home and lifestyle range, as what we are creating within these shop-in-shops is a capsule of John Lewis."

The 45 square meter shop-in-shop in de Bijenkorf, Amsterdam offers both John Lewis trend driven lifestyle range, featuring products such as Egyptian bedsheets, towels, robes and cushions as well as its more premium 'Croft' collection of home items. But in order to ensure that their product offering would speak to the Dutch consumer, as well as the international shopper, John Lewis's own home buying team worked closely with the team at de Bijenkorf. 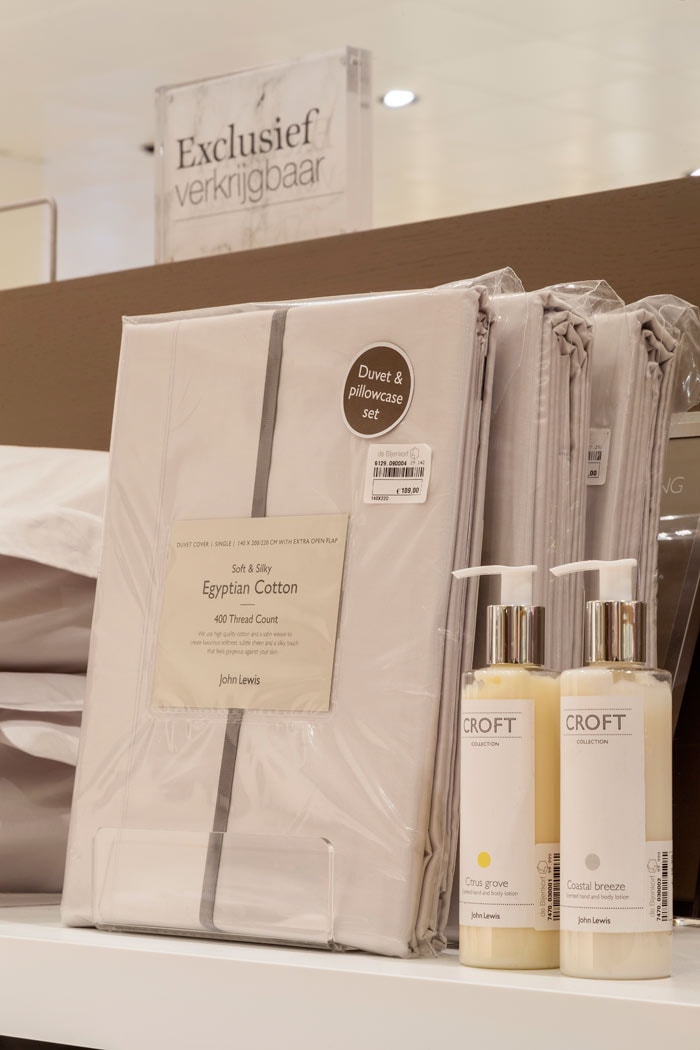 "The buyers here really helped us hone [the offering] for this market," added Jordan, noting that in the future they will continue working closely with de Bijenkorf to continue developing the range and refining the edit with the buyers. "We entrust them to be the brand experts of John Lewis." Benjamin Terzibasiyan, Head of Buying Home & Leisure at de Bijenkorf, explained that the Dutch department store aimed to create a range which really spoke to their customers, but also brought an added experience to the store.

"We really wanted to create a 'life set' that evoked a sense of calm and relaxation in store, but is also co-ordinated and well-matched to each other, so we worked closely with John Lewis to achieve this goal." In addition to ensuring the products are well suited to each other, John Lewis also aimed to ensure its shop-in-shops felt "new and inspiration" to encourage Dutch consumers to come and discover their brand, an objective they seem to have already achieved. 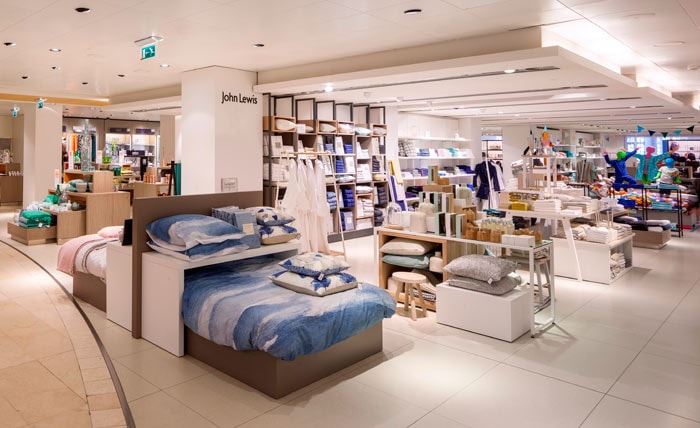 John Lewis partnerships based on finding the right "synergy"

Even though the first three shop-in-shops have been barely open a week, John Lewis's products have been "flying off the shelves," so to speak said Jordan, with the shelves in its store in Rotterdam nearly being cleared. It's immediate success does suggest that John Lewis has found its perfect retail match with de Bijenkorf, but what makes the two department stores compatible? "In our search for partners outside the UK, we are really looking for a similar service experience our John Lewis customer would expect," explained Jordan.

"Our customers in the UK have high expectations of how they will be shopping in our stores, so we would want our brand to sit in a similar environment overseas. We want it to be in an environment where the customers understand the quality of our brand and appreciate quality, provenance, value, where and how things are sourced, which points to particular retailers." John Lewis's partnership with de Bijenkorf follows on from their successful partnerships with Shinsegae in South Korea, Robinson in Singapore and SM Retail in the Philippines, which according to Jordan, stemmed from an initial partnership with the department store's sister branch, Waitrose. 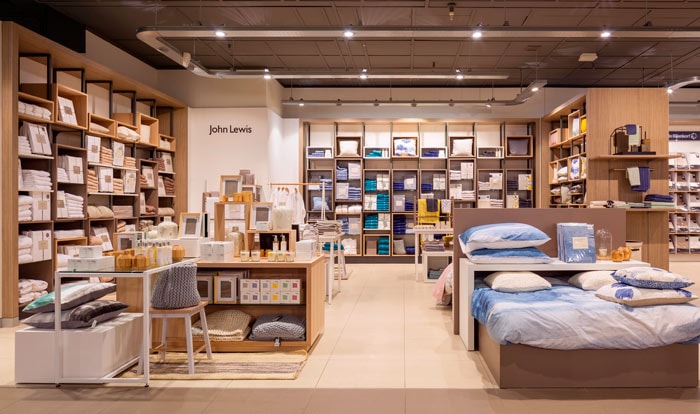 "We trialled our product in South Korea and it went incredibly well - from 2 to 4 to 7 shop-in-shop very quickly and became one of their best selling brands. This encouraged us to try other markets essentially." The obvious focus was to move into neighbouring markets, so last year saw John Lewis open shop-in-shops in Singapore and the Philippines. "But we always knew it would be nice to see by contrast if it would also work closer to home," said Jordan. Although de Bijenkorf was the first wholesale partner the British department store found in Europe, the high street staple is keen to continue expanding its brand presence overseas , with the right support naturally.

"Rather than having a bucket list of countries we would like to be in - which of course we have - the most important part for us when it comes to selecting a partner is the synergies between the retailer and ourselves," noted Jordan. As the shop-in-shops offer a very limited assortment of the full and broad UK offering, John Lewis's Head of International Development believes the key to success lies in working with the correct partners. "The partnership has to be with a retailer which is focused and able to see the product and sell the product we think will be right outside of our UK market." 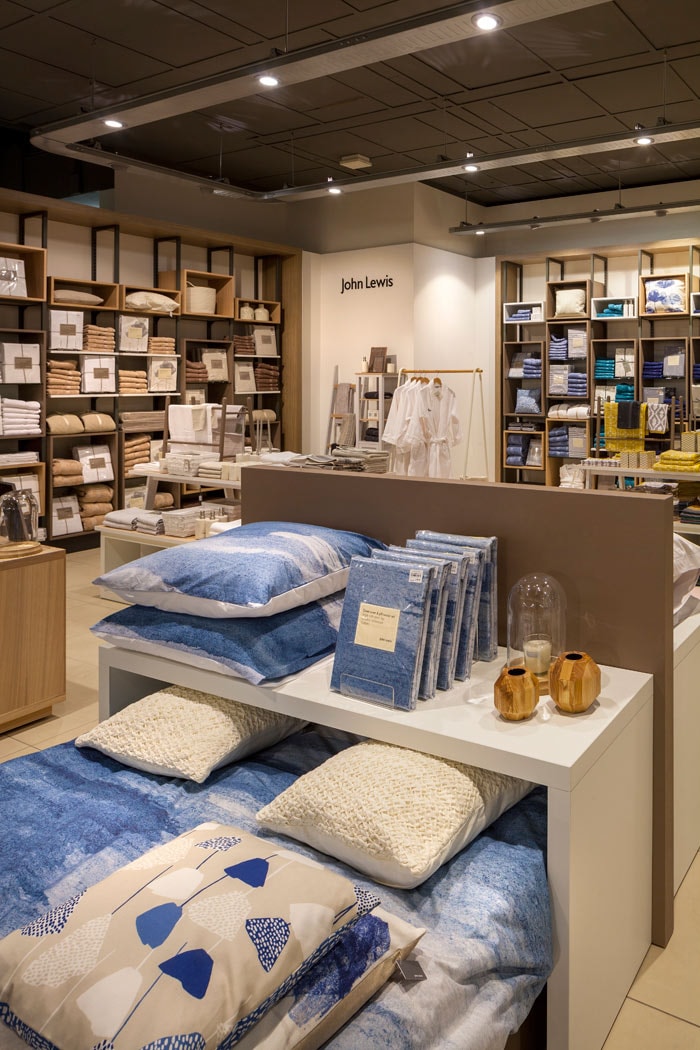 Although John Lewis only began its international expansion scheme a few years ago, Jordan believes that their lifestyle product range is one of their strongest collections outside of its UK retail format. "There's actually very little competition in that mid to premium homewares market. You have your value operators and very premium brands, but at the affordable luxury end there isn't many, or any that I can think of that offer that mixture of core product and trend like we do. If you are doing up your home we can give you curtains, rugs, everything and I think that is quite unique and one we have identified as a gap in the market."

But Jordan is quick to add that this does not mean that John Lewis is limiting itself to only offering its homeware and lifestyle product range outside of the UK. "As we go into new territories and our partners tell us about different areas we could fulfill for them - that is really the beauty of our wide assortment - we can layer on ranges as we see fit." For example, in de Bijenkorf, John Lewis included an edited range of its collection of Egyptian cotton bedsheets, something the Dutch department store previously did not offer. In that sense, John Lewis was then able to bring additional value to the store. "We look for that synergy between what we can provide as a brand and what the retailer can’t create for themselves or find from other brands, because it is not our intention to go into another market and compete with other department stores own-brands." 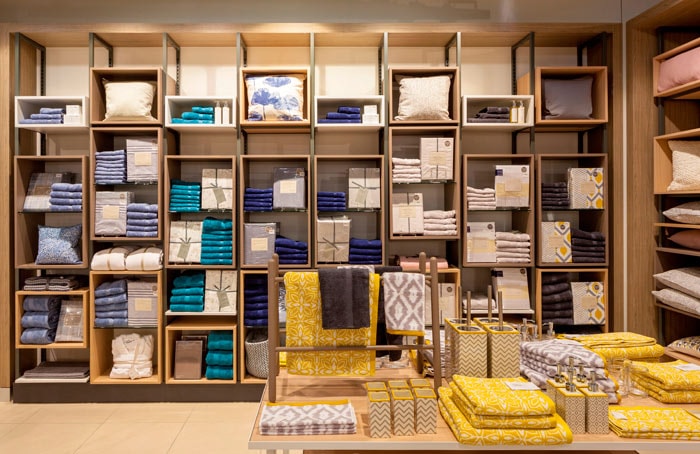 Speaking of going into other markets, following John Lewis descent into the Netherlands comes its next overseas foray - into Dubai. "We will be partnering with Robinson's department store in the Middle East on a much bigger format," said Jordan. "As it is a much bigger space, we will offer a bigger assortment. Here it was a bit difficult to squeeze furniture in 45 square meters - although we have - but in Dubai we will have furniture, mattresses and a bit of nursery product for the first time." She noted that Robinsons is keen to fill a gap in their market in terms of furniture and bedding for children, hence why they have decided to bring their 'Little Home' collection to the Middle East.

However Jordan is no stranger to editing John Lewis wholesale product offering per market, as she has discovered nearly each country has its own sizing for beds and bedsheets. "Obviously there is a European size, but in addition to that they have a different model for bedsheets. In the UK we typically have buttons finishing a duvet cover, in Holland they have this sort of flap you tuck in at the bottom. So we are making this product sizes and specifications to suit the Dutch market and we will create bespoke products for each of our markets." She credits the department's store flexibility with its product offering to their scale of production and manufacturing capabilities. “We would love to expand globally and we haven’t put any limitation on it as it’s about expanding our product into new markets. The more markets we are in the better because that helps us develop ourselves as product specialists.” 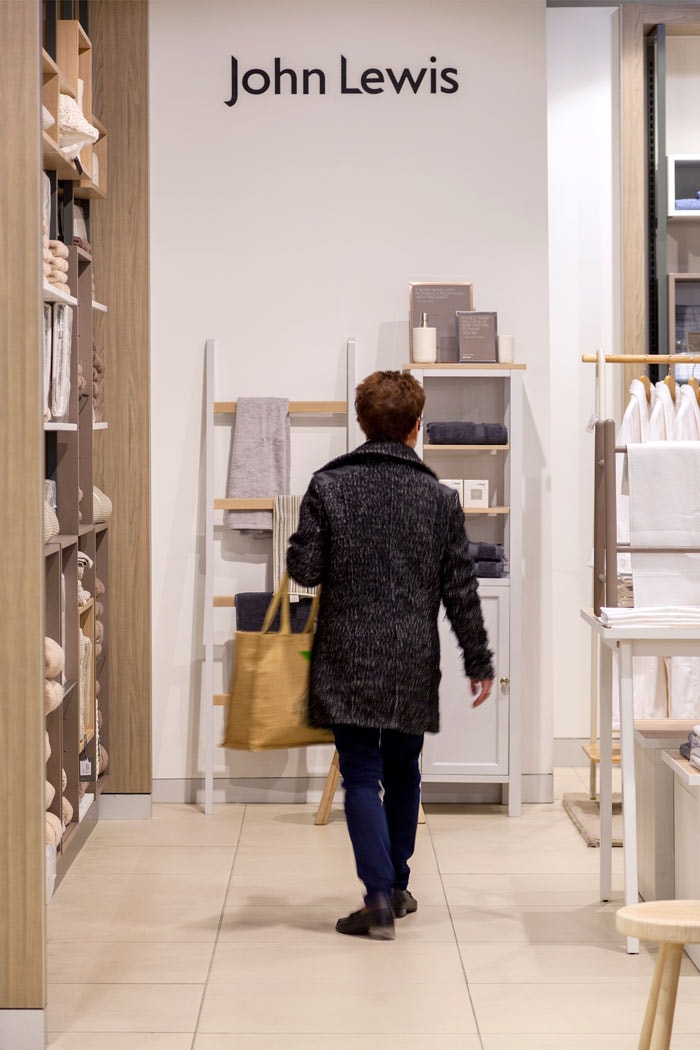 However, in spite of John Lewis found success overseas through its numerous partnerships, the British department store does not plan on launching its retail format across the pond. “It’s not part of our ambition. We’ve have 5 stores in our pipeline to open over the next two years in the UK and although we currently have 46 stores, there are areas in the UK, especially in the North where we have no penetration. And that’s our goal - we are a British retailer. What we are doing here, in de Bijenkorf is more about our product brand, not us as a retailer. We put in a lot of effort into the manufacturing, sourcing and sale of our own brand and now we have an outlet outside of our own retail outlet to sell that to customers and that’s really exciting to us.”