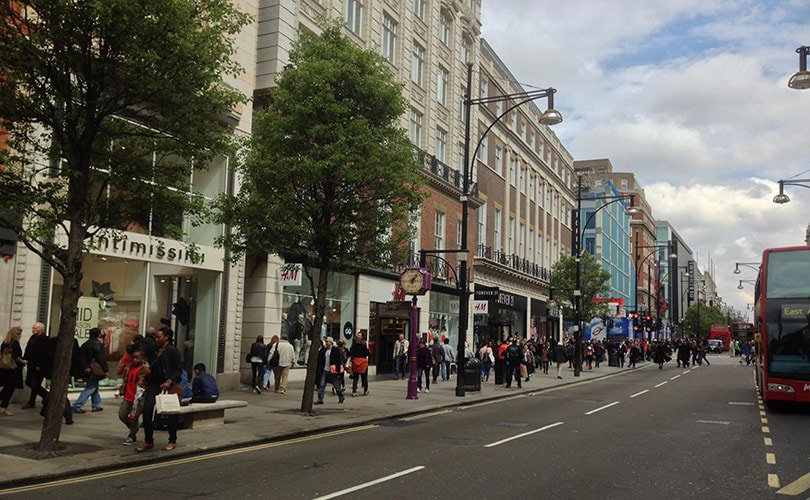 Record international demand, investment and development across London’s West End during last year helped the area contribute 51.25 billion pounds to the UK economy, according to a new report unveiled by the New West End Company.

2014 was a good year for the shopping area, which covers 109 streets in London, as retail sales topped 11 billion pounds, a record for the area according to the London’s West End: Review and Outlook that was produced by global real estate experts JLL on behalf of the New West End Company, Heart of London Business Alliance and Shaftesbury PLC.

The popularity of the area has seen record international demand for retail space from Piccadilly to Carnaby Street, and in 2014 it attracted 80 new brand openings including Victoria Beckham, Hunter, and Aquascutum, and over the course of the year West End retailers received 390 million shoppers, with 18.7 million tourists flocking to the area from 120 countries.

2015 has also started strongly with Spanish fashion giant Zara and US children’s TV channel Nickelodeon both signing up to open new stores in the West End this year.

The report also adds that the West End is set for the biggest influx of retail space over the next fifty years, in part due to Crossrail, with East Oxford Street particularly benefiting from not only 300,000 square feet of additional retail space, but additionally a 2 million pound public realm investment including a new public piazza between Charing Cross Road and Centrepoint. The report also highlights a desirability amongst retailers for traditionally less sought after surrounding streets, near the re-developed Bond Street and Tottenham Court Road tube stations.

Richard Dickinson, chief executive officer, New West End Company: “The report reveals 2014 was a strong year for the West End’s performance and landmark leasing deals. With an unrivalled interplay of retail, leisure and hospitality industries, it is not surprising that the West End continues to outstrip its competitors with retail sitting at the core of the area’s economic output.

“Existing retailers want to upsize and international brands are vying to locate here with the upcoming pipeline of new retail spaces in the Core West End set to fulfil this demand.”

Sarah Porter, CEO, Heart of London Business Alliance, added: “The report highlights the continued importance of future-proofing the West End by creating a rich visitor offering and experience beyond retail and strong double digit growth in food and beverage sales in the last quarter of 2014 is a testament to this.

“The area’s strong leisure and entertainment offer continues to enrich the visitor experience with institutions such as The Royal Academy of Arts and The Ritz London giving the area international acclaim. As home to many of the West End’s most renowned historic qualities, we have worked carefully with TfL, Westminster City Council and The Crown Estate to ensure our approach to improving the public realm for visitors puts the heritage of the area at its heart.”