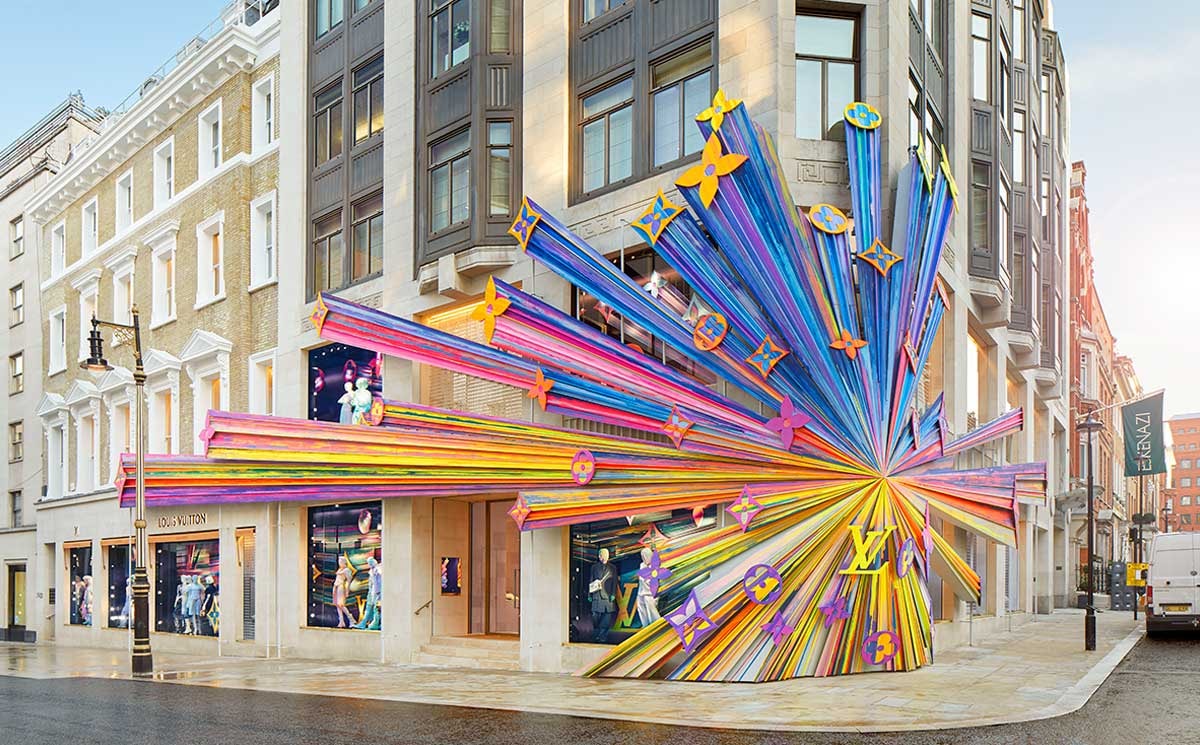 The new 17,500 square foot store at 17-20 New Bond Street is the transformation of combining two different buildings into one location, which started with the reconstructed exterior by New York-based architect Peter Marino, which now features a vivid Louis Vuitton branded explosion of colour.

The London flagship is much more than just a retail boutique, the fashion house explained that it has been designed to be a luxurious “travel destination”, with changeable gallery spaces, and artwork from 25 artists by the likes of Campana Brothers, Tracey Emin, Annie Morris and Sarah Crowner, as well as boutique areas highlighting its women’s ready-to-wear, leather goods, jewellery, menswear, and footwear.

The instant airy feeling when consumers step inside is highlighted by the double-height ceiling, a large skylight, and a sweeping double helix shape staircase, as well as the light-coloured floor and walls in a Damier check pattern made of Croix Huyart stone and Pierre Bleue du Hainaut marble.

This is showcased even further with the colour pops around the store, from the four Cocoons by the Campana Brother’s from the Objects Nomades collection, hanging from the double-height ceiling, which are on display for the very first time in the UK, to the colourful rugs, sculptures, Tracey Emin’s Love Is What You Want, a monumental work by Sarah Crowner, commissioned for the store that reaches nearly 7 metres long, and a rainbow coloured tape installation by Scottish artist Jim Lambie. 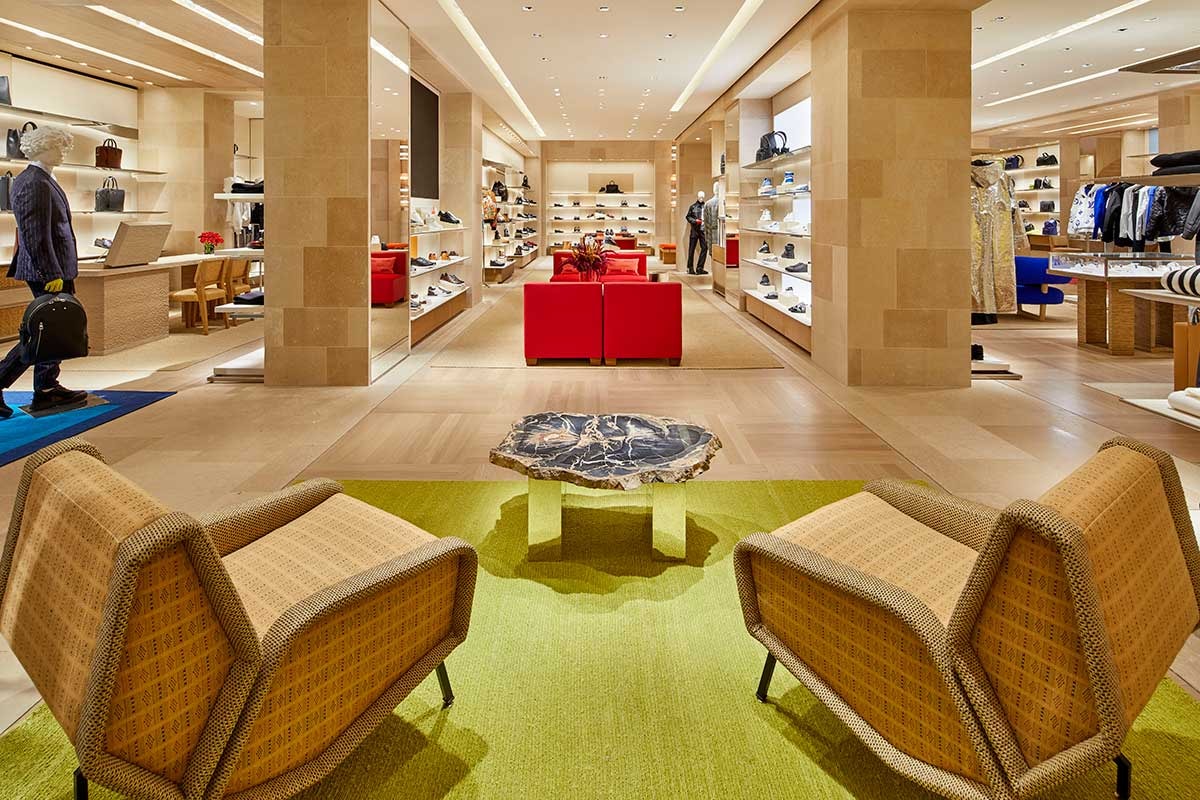 Highlights of the new-look New Bond Street Louis Vuitton includes the new jewellery area, which will be the only store in the world, aside from the Maison Vendôme in Paris, to hold a full high jewellery collection, showcasing pieces made with gemstones including sapphires, emeralds, spinels and Santa Maria aquamarines.

Adjacent to the high jewellery area along the facade of New Bond Street, you reach the main women’s ready-to-wear salon, showcasing the collection by Nicolas Ghesquière, Louis Vuitton’s artistic director of women’s collections. There is also an area dedicated entirely to men’s ready-to-wear and shoes by Louis Vuitton Men’s artistic director Virgil Abloh, as well as accessories and watches.

In addition, there is a fragrance and candles area, a silk scarves boutique, and of course, the designer brand’s leather goods, highlighted by two exclusive versions of the Dauphine bag, in burgundy and navy and dark teal and navy, and a custom London Tea Trunk, which features compartments holding Fortnum and Mason’s iconic Camellia Tea Set, a removable wooden tray and folding wooden table.

Throughout the store seating and furniture has been custom made by Peter Marino who has also curated important vintage pieces from designers including Charlotte Perriand, Pierre Paulin and Jean Touret.

Scroll futher to look inside the new flagship for Louis Vuitton 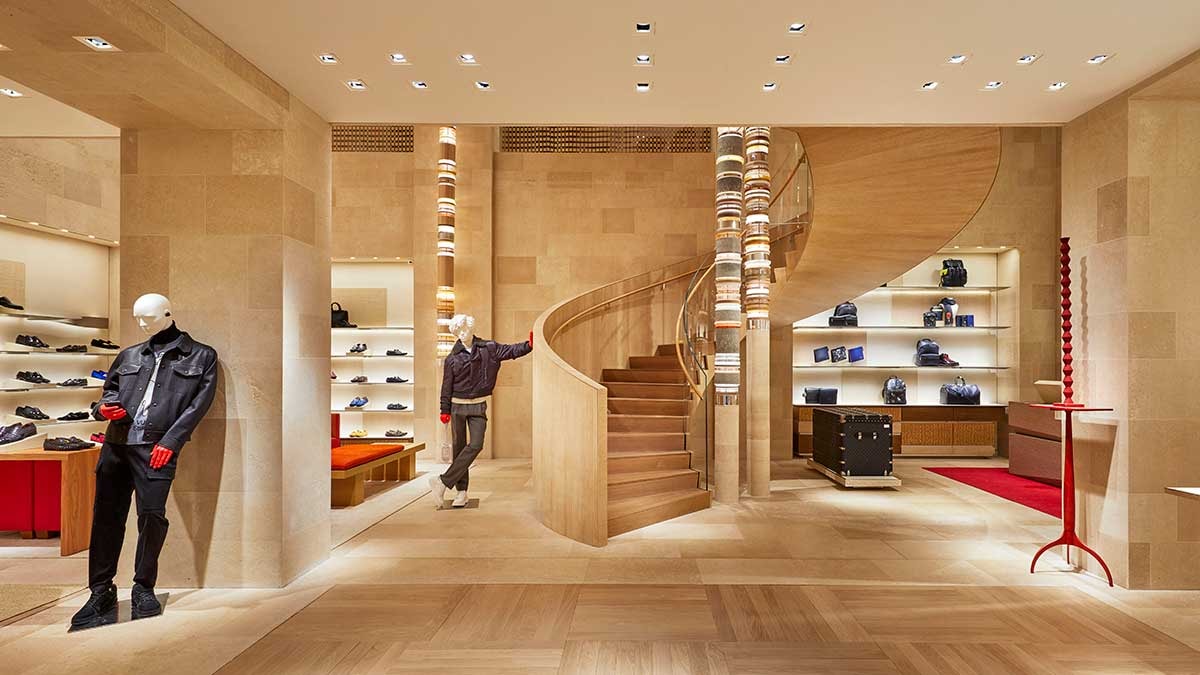 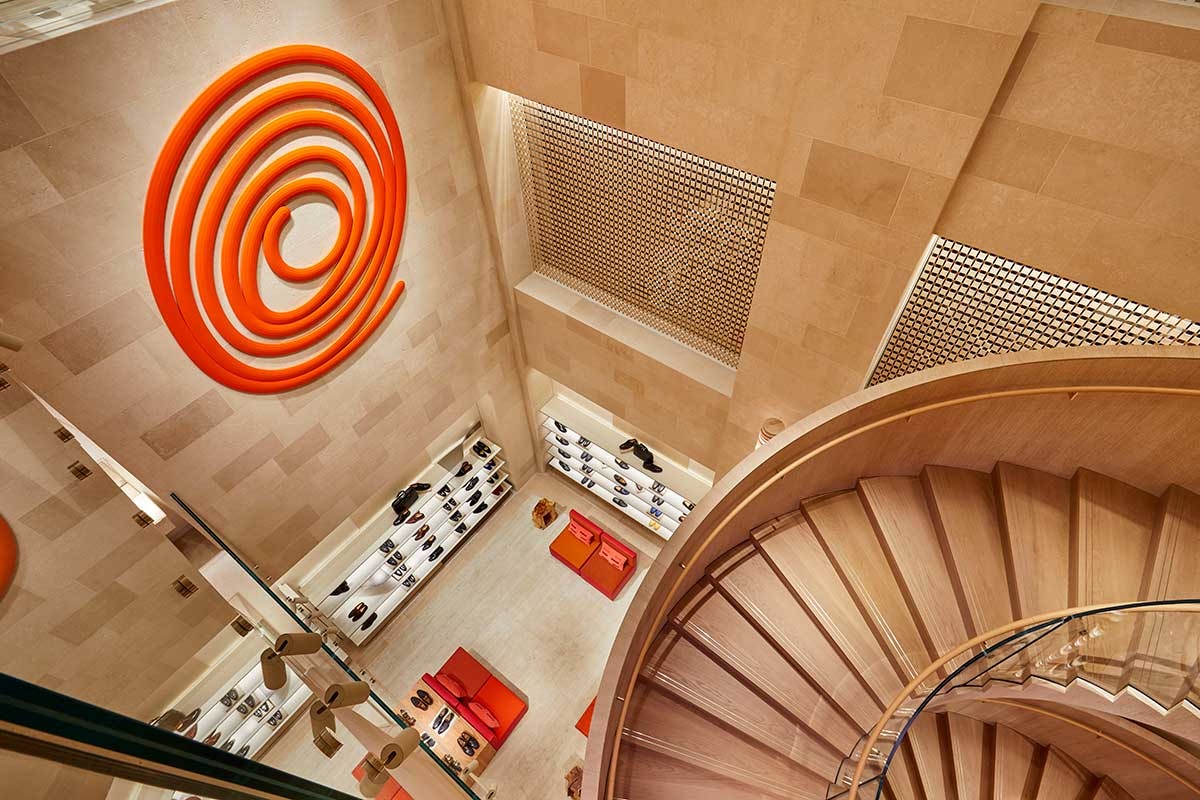 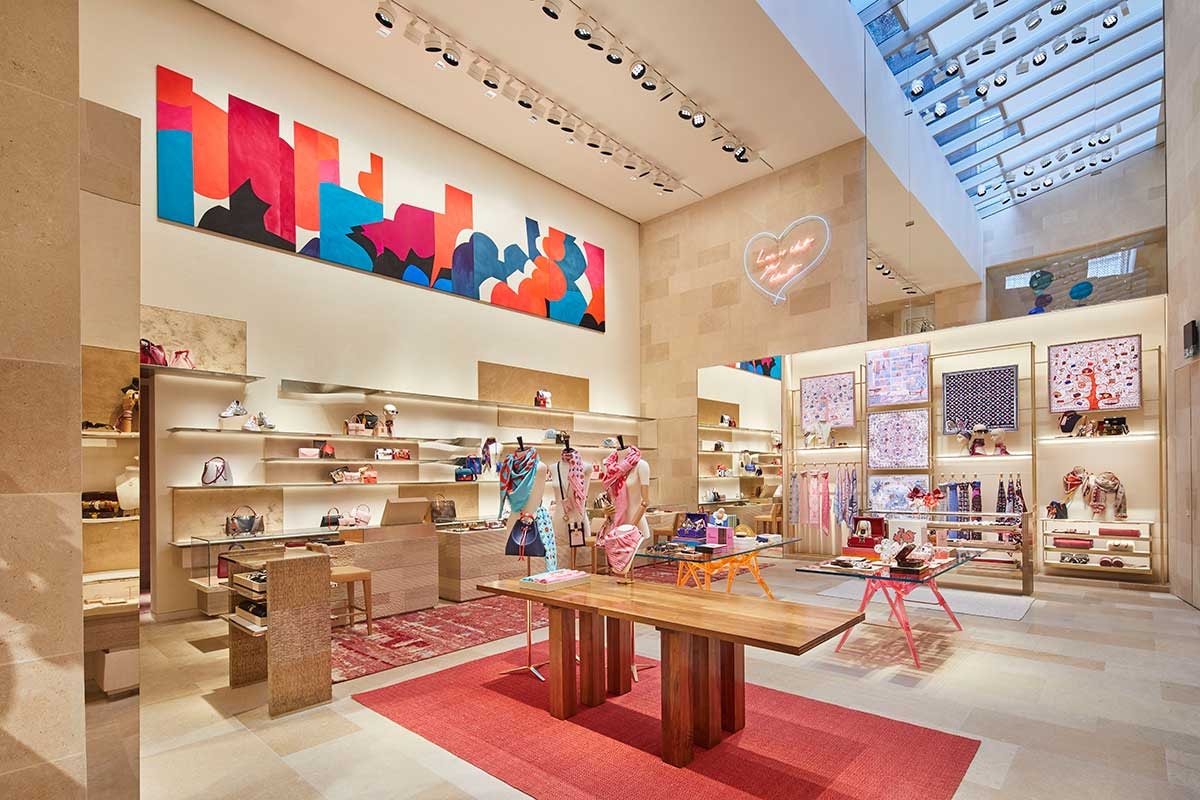 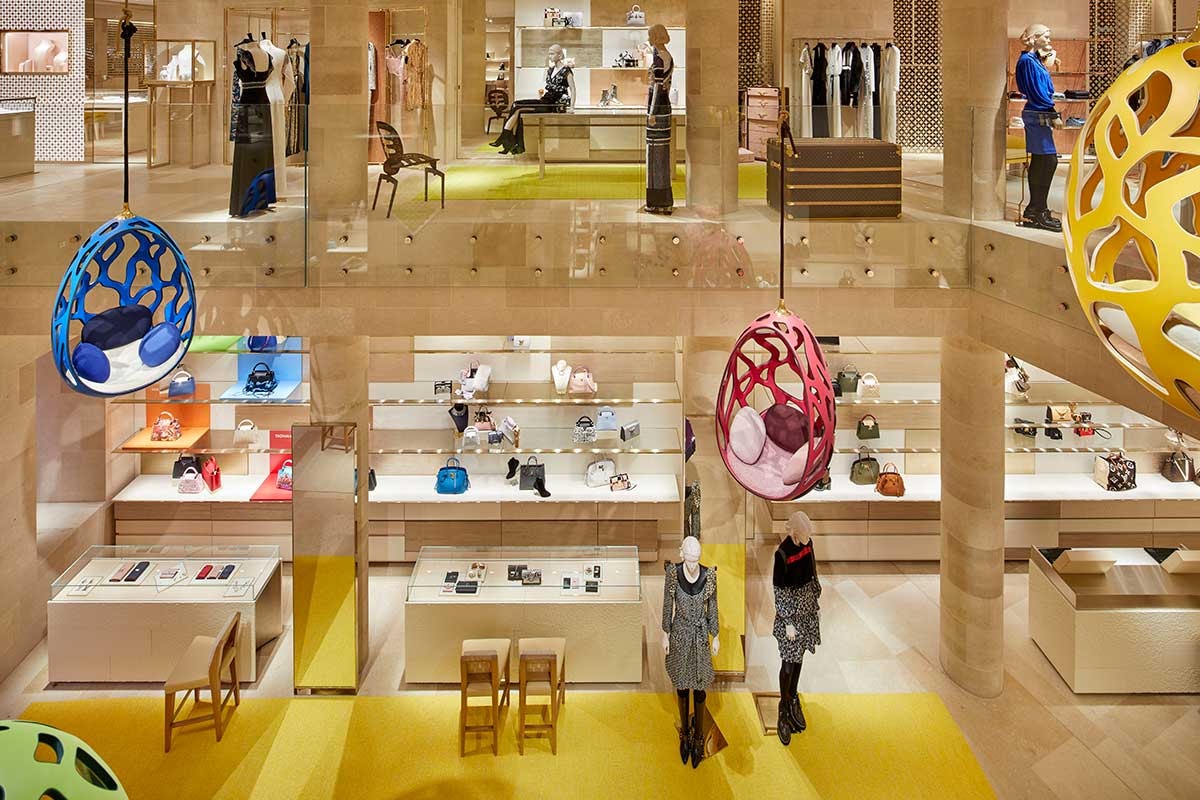 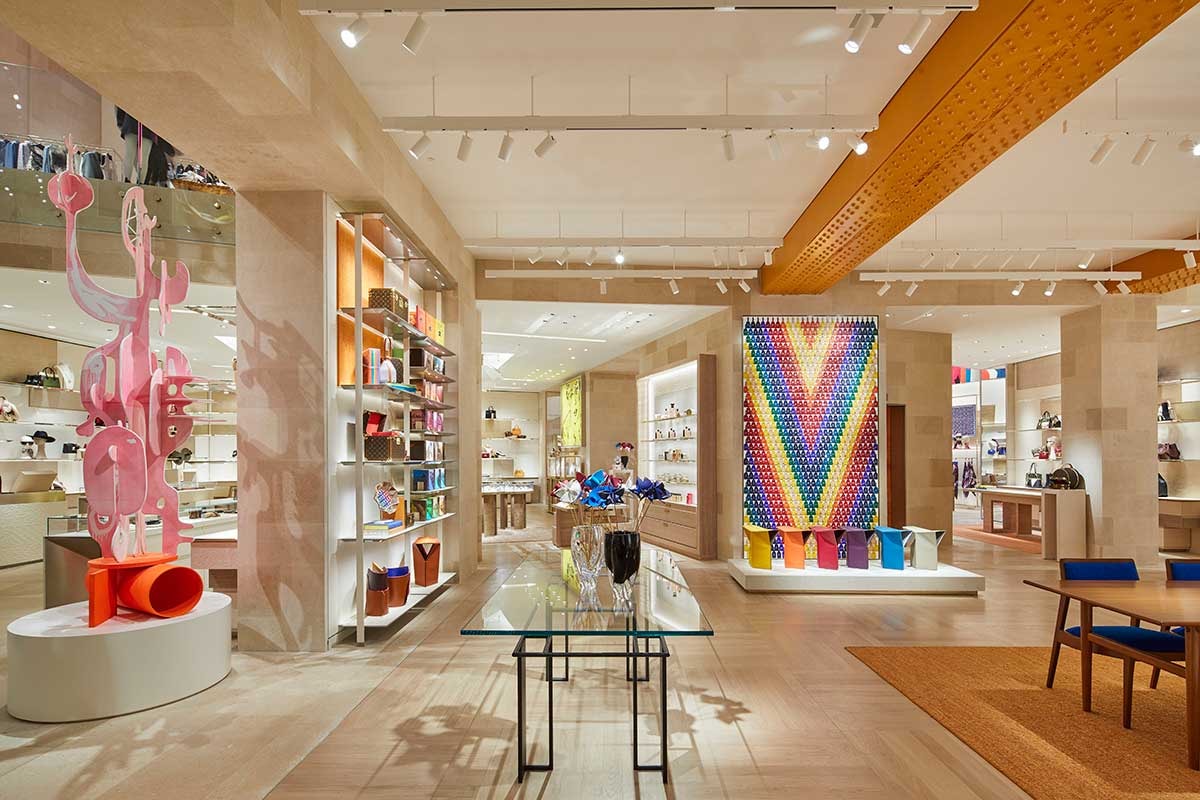 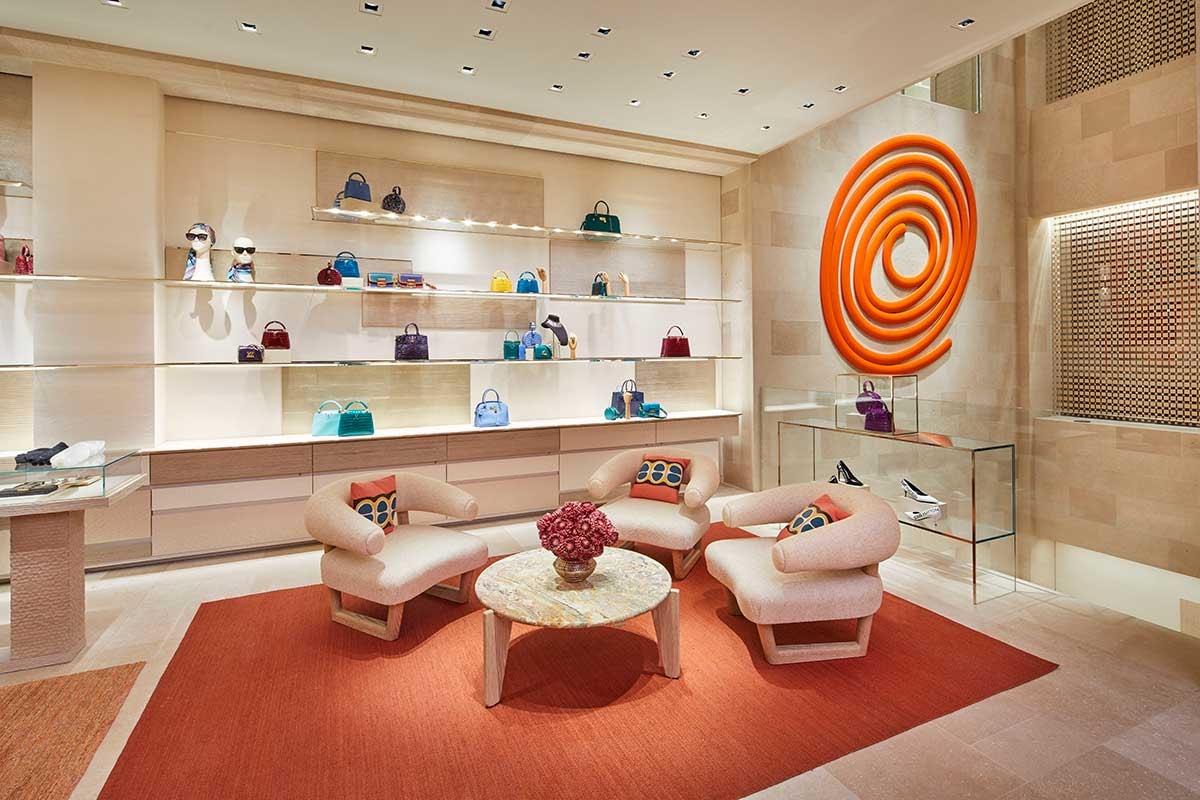 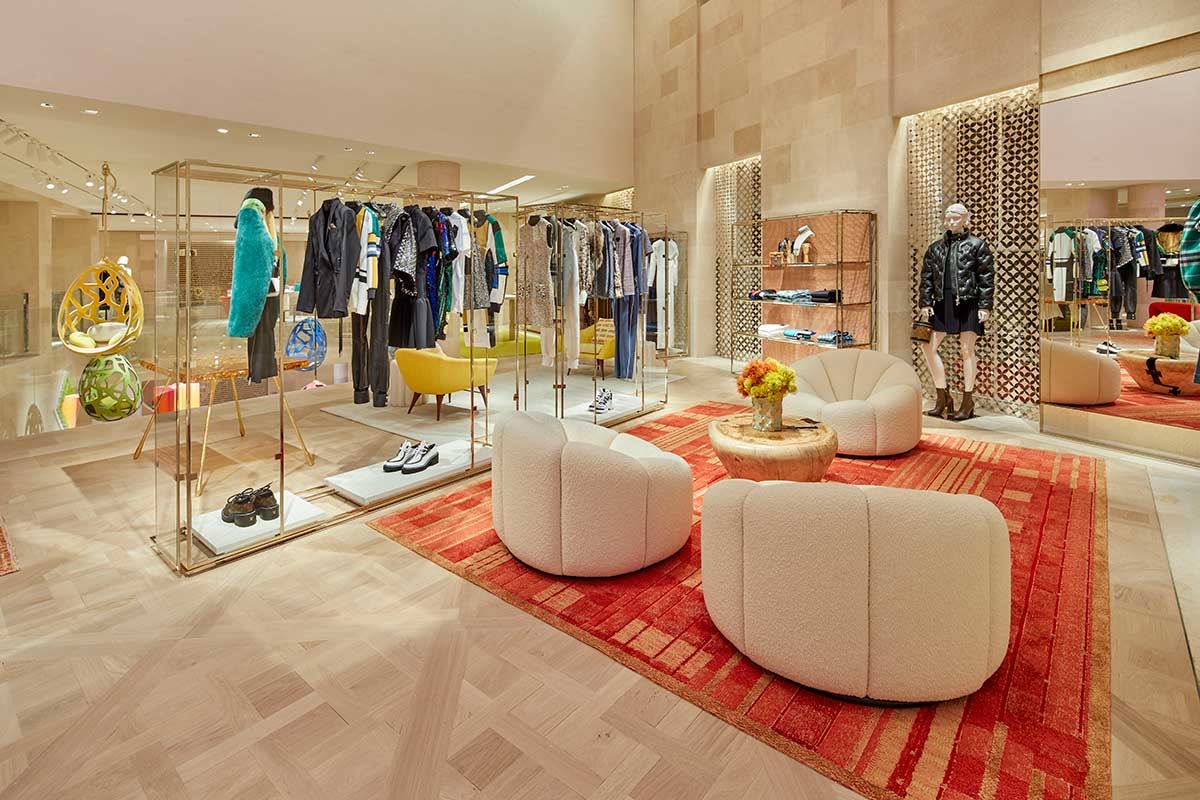 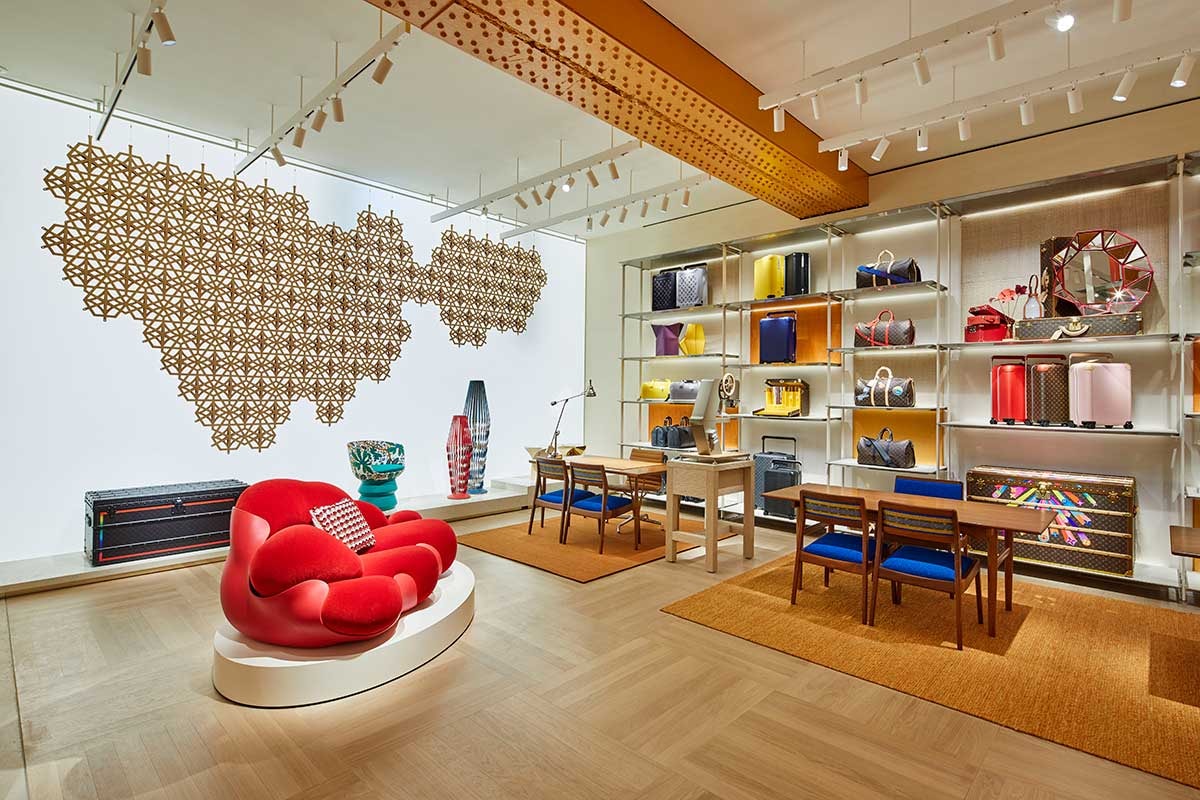 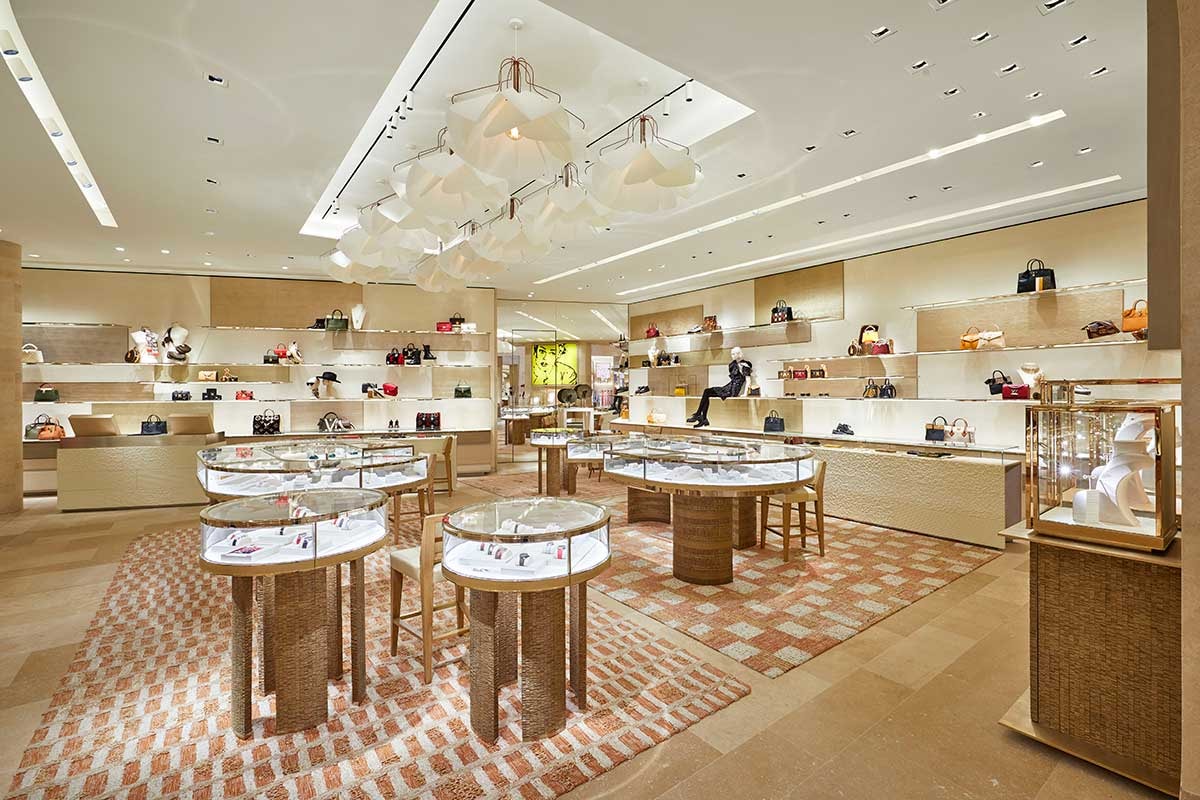 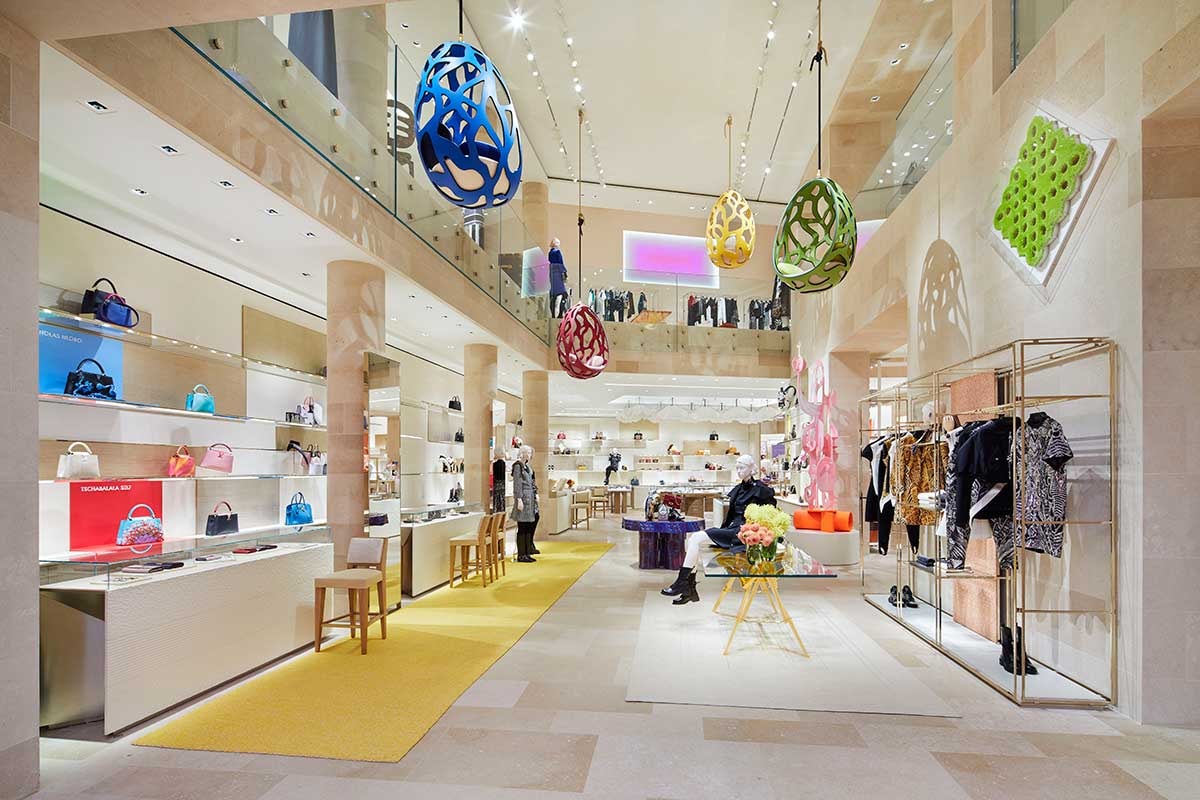 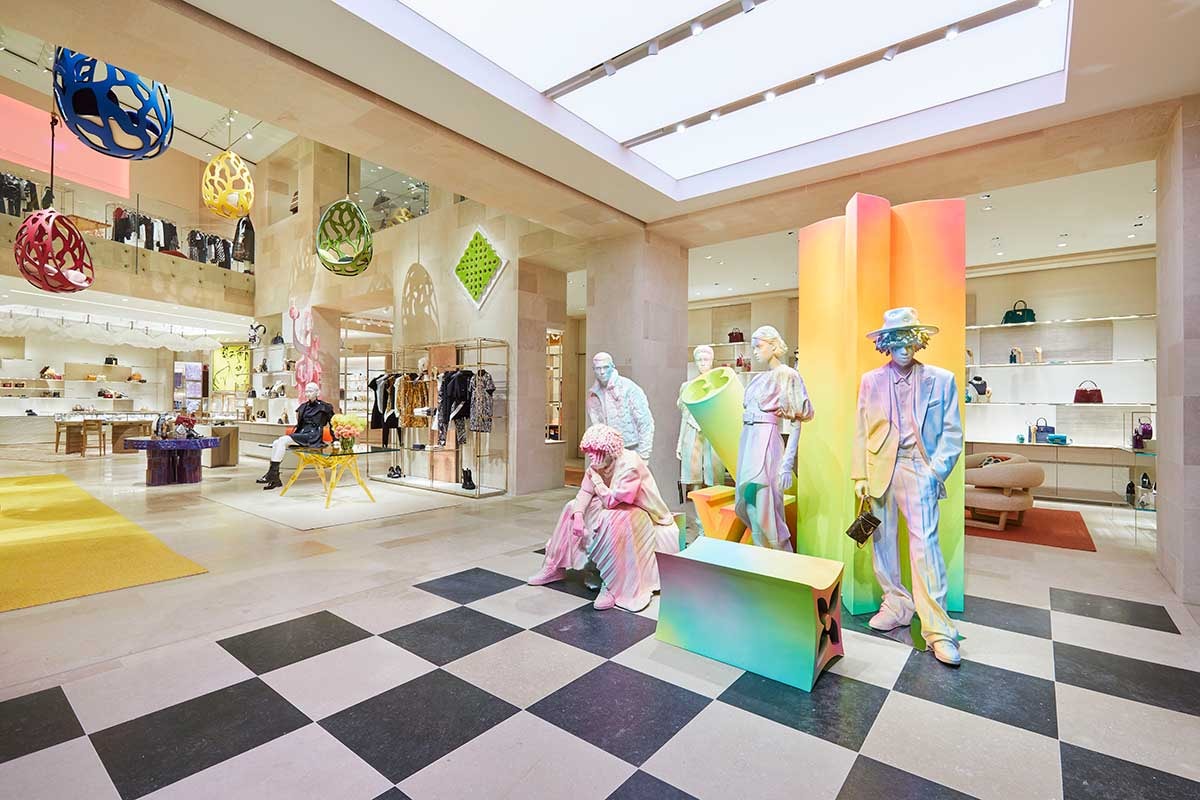 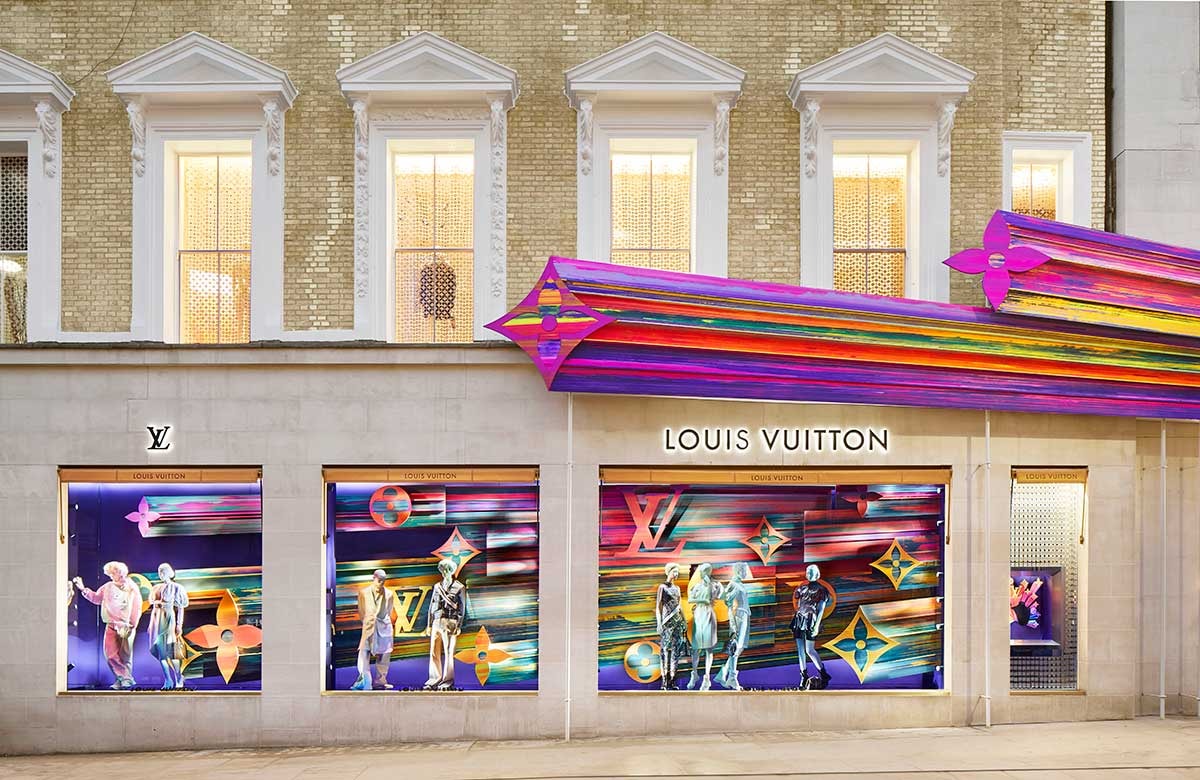