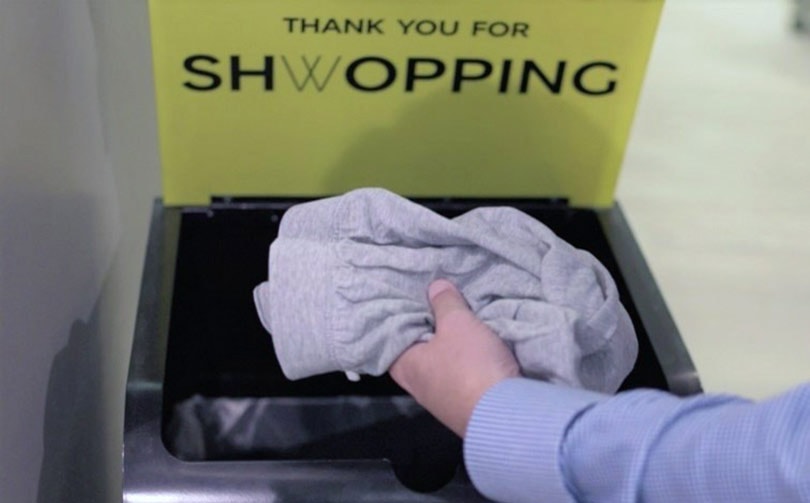 Customers can donate unwanted clothes, shoes, bras, and accessories of any brand or condition in nearly 290 Marks & Spencer stores. All items donated will either be resold in one of Oxfam’s shops or online, to be reused by its social enterprise in Senegal or to be recycled into new materials, which are used by businesses such as Marks & Spencer’s mattress filling.

In March, Shwopping was temporarily paused in order for Marks & Spencer's colleagues to focus on putting the additional safety measures in place because of the Coronavirus. A public survey by Wrap suggested that two in five UK citizens (41 percent) have cleared out their wardrobe during the Covid-19 lockdown, and data reported to Wrap estimated that as much as 67 million clothing items and 22 million pairs of shoes will be donated to charity shops, collection banks and other donation routes.

Carmel McQuaid, head of sustainable business for Marks & Spencer, said in a statement: “At M&S, our goal is to source all our products with care and ensure nothing we make goes to waste. We want our customers to be confident that the clothes they buy at M&S are made to last, but if they finish wearing their old favourites, we make it easy to give them a new purpose through Shwopping.”

Through Shwopping, nearly 23 million pounds from the sale of donated items since 2008 have been raised to support those in extreme poverty.

Fee Gilfeather, head of audience and strategic planning at Oxfam, commented: “Shwopping is designed to make it easy for customers and the general public to donate unwanted garments to Oxfam via M&S stores and helps to extend the life-cycle of clothes and reduce the number of items of clothing going to landfill.

“The return of Shwop drops to M&S stores means that there are more ways for people to donate to Oxfam and support our work fighting poverty and helping vulnerable communities around the world.”

Marks & Spencer is starting to include details of the sustainable raw materials used for its clothing products online (available for 4,000 so far), and the retailer has removed paper return slips in place of digital returns from every online parcel (saving 140 tonnes of paper each year).

Recycling fashion in the UK

The UK has one of the highest collection rates of used clothing in the world (per head of population) according to the Textile Recycling Association. Around 650,000 tonnes of unwanted clothing is collected annually from charity shop donations, door-to-door charity collections, car park clothing banks, school collections, high street take-back schemes and kerbside collection, according to the UK Parliament (textile waste and collection).

The Textile Reuse and International Development (Traid) stated that the UK’s 11,000 charity shops diverted over 330,000 tonnes of textiles from landfill in 2017 and helped reduce carbon emissions by millions of tonnes a year by reusing and recycling second-hand clothes.

Every week the UK sends 13 million items of clothing to the landfill and the clothes that Oxfam saves from the landfill every year weighs as much as the Eiffel Tower.