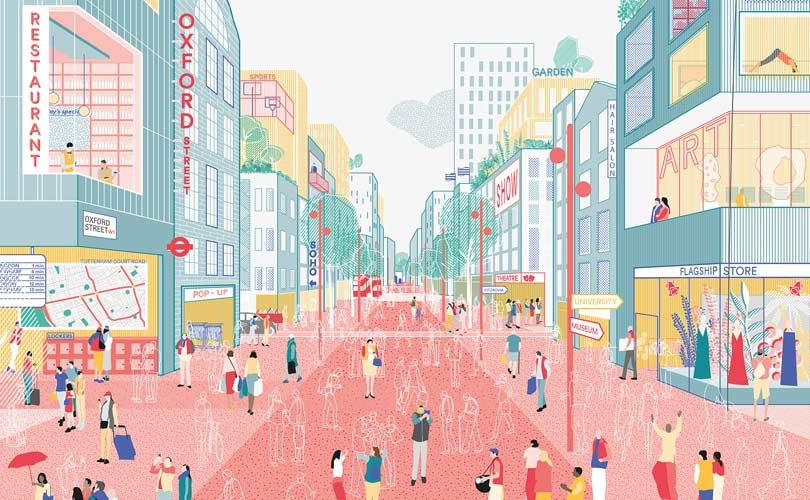 The New West End Company, which represents 600 retailers in London’s West End has unveiled a new vision for Oxford Street that it believes will allow the district to “realise its full potential” as well as create 27,000 new jobs.

The aim is to develop Oxford Street district into a place that meets all the needs for everyone who lives, works, invests and visits the area, by recommending plans to open new office, retail and leisure space, such as reviewing current planning policy to allow letting to entry-level retailers for short periods of time if a building is vacant, to implement a “pleasant” pedestrian environment, more public amenities such as seating and toilets, as well as to “animate” the area with a calendar of changing events.

In addition, the group also wants to clear routes between Oxford Street and the surrounding neighbourhoods of Mayfair, Marylebone, Fitzrovia, Soho, Bloomsbury, Covent Garden and Hyde Park to “encourage exploration and connections to the wider West End”. It is predicted that 260 million visitors will visit London’s Oxford Street by 2020.

The New West End Company chief executive Jace Tyrrell said: “The West End’s businesses have an aspiration for Oxford Street district to be transformed from a single shopping street into a varied, entertaining and well-connected district. Their vision for the area is that is becomes a vibrant centre for civic life, culture and commerce with the world’s best retail district at its heart.

“Our study brings this to life and makes implementable recommendations for its realisation to ensure that the West End can compete with fierce international competition and leads the way as a global retail and leisure destination.”

The group believes its proposed plans could create 27,000 to 30,000 new jobs in the next 15 years, as well as generate up to 206 million pounds worth of planning contributions for Westminster City Council and the Mayor of London and up to 160 million pounds in additional annual revenue in Business Rates to invest in West End priorities and improvements.

Sue West, director of operations at Selfridges, who is an NWEC board member, added: “This is a once-in-a-lifetime opportunity to reimagine one of the world’s most famous shopping streets as the world of retail continues to evolve.

“We have the opportunity enhance Oxford Street’s standing as an integral part of a global shopping, cultural and commercial centre, restore its position as a focus for experimental design, culture, spectacle and entertainment while at the same time maintaining its historic character, not least it links to its established residential neighbourhoods.”

The report forms the basis of New West End Company’s official response to the consultation launched in April by Westminster City Council and Transport for London on the transformation of Oxford Street.