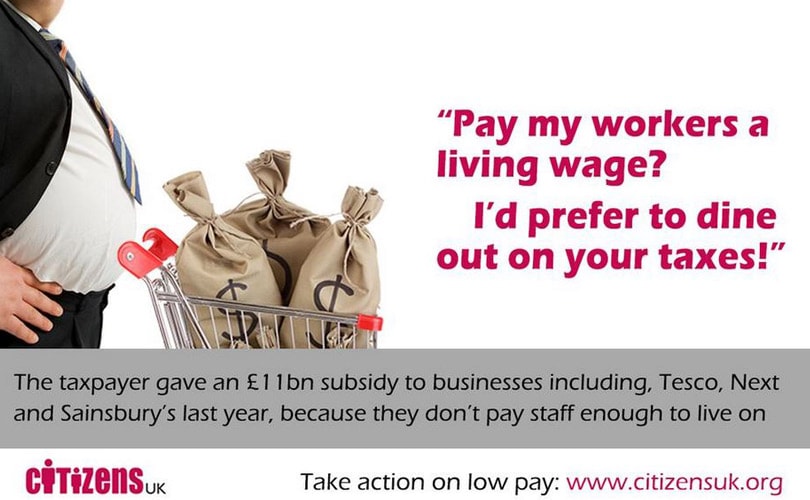 Large retailers including Next, Tesco, Asda and Sainsbury’s have been named and shamed in new research by Citizens UK as costing the taxpayer 11 billion pounds per year for paying below the living wage.

According to the community charity Citizen UK, more than 5.24 million people in the UK, 22 percent of all employees, earn less than the living wage, which means that the Treasury is forced to step in and top-up incomes with in-work benefits, such as tax credits, so that workers can afford a basic standard of living despite being in employment.

The research has found that some of the UK’s largest retailers are benefiting more from the Treasury in wage top-ups than they are paying in tax. It states that Next staff are forced to claim over 67 million pounds benefits in order to afford a basic standard of living, while Tesco employees claim more than 364,000 million pounds, and Asda staff over 221,000 million pounds.

Each of the 32,000 “low waged” workers at fashion retailer Next, costs the taxpayer approximately 2,087 pounds, according to the report.

The Rev Karen Rooms, area dean for Nottingham South and member of the Citizens UK Council said: “The figures revealed by this research are shocking, as the true scale of the subsidy of big business becomes clear. The huge profits made by some of these high street names are made off the back of poverty-wages.

“In some instances the amount of tax they pay doesn’t even cover the wage top-ups we all have to chip-in and help with through the Treasury. At a time of austerity when all sectors of society have to make savings it seems obscene that big business isn’t playing its part to help the country recover.”

The letter says: “It’s a scandal that your companies, including some of the largest and most profitable in the country, count on the public to prop up lousy pay to your workers and that, in some astonishing cases, you receive more in public subsidy than you contribute in corporation tax to the public purse.”