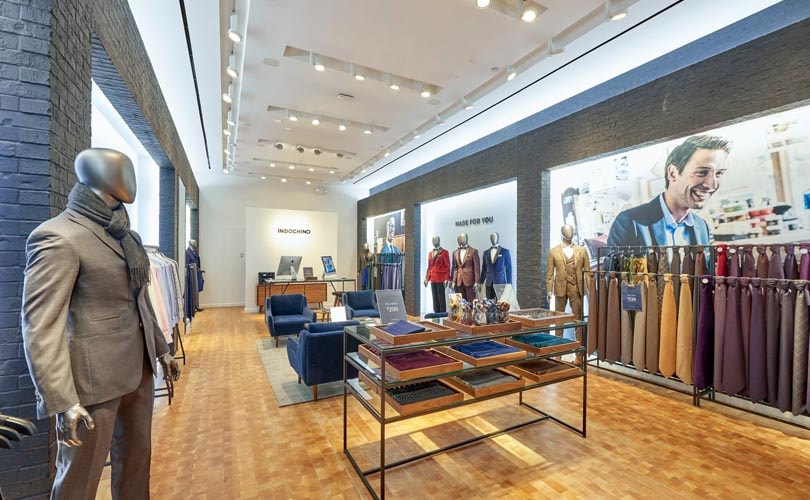 The showroom model: will brick and mortar stores carry inventory in the future?

It may seem counterintuitive for pure online players to venture into physical retail, considering how brick and mortar stores are struggling (Credit Suisse predicts 25 percent of all US shopping malls to close by 2025, while the UK high street is having its worst period since 2013). Yet, that is exactly what prominent e-tailers are doing. Investment management company JLL forecasts digitally native brands to open about 850 stores over the next five years in the United States alone -- and fashion retailers are the most prone to transition from clicks to bricks.

The thing is, they’re doing it differently. Traditional brick and mortar retailers may be scared of customers leaving their stores empty-handed only to buy the same products from an online shop later, a practice best known as “showrooming”. Similarly, pure online players may be annoyed about “webrooming”, when shoppers use the Internet solely as a research tool, heading to a physical store as soon as they make up their minds. But, for many retailers going from clicks to bricks, these new shopping habits represent an opportunity rather than a threat.

Showrooming is the core pillar of their business model, as their physical stores carry no inventory at all. Instead, customers are invited to order off a tablet at the end of their visit, and wait for the purchase to arrive at home some time later. But this retail model also offers e-tailers a chance to turn “webroomers” into loyal customers, since those consumers can see and touch the products they’re interested in buying without resorting to a brick and mortar competitor.

To find out more about this strategy, FashionUnited spoke to two companies which went from clicks to bricks by using the showroom model: European eyewear brand Polette and Canadian suits label Indochino. 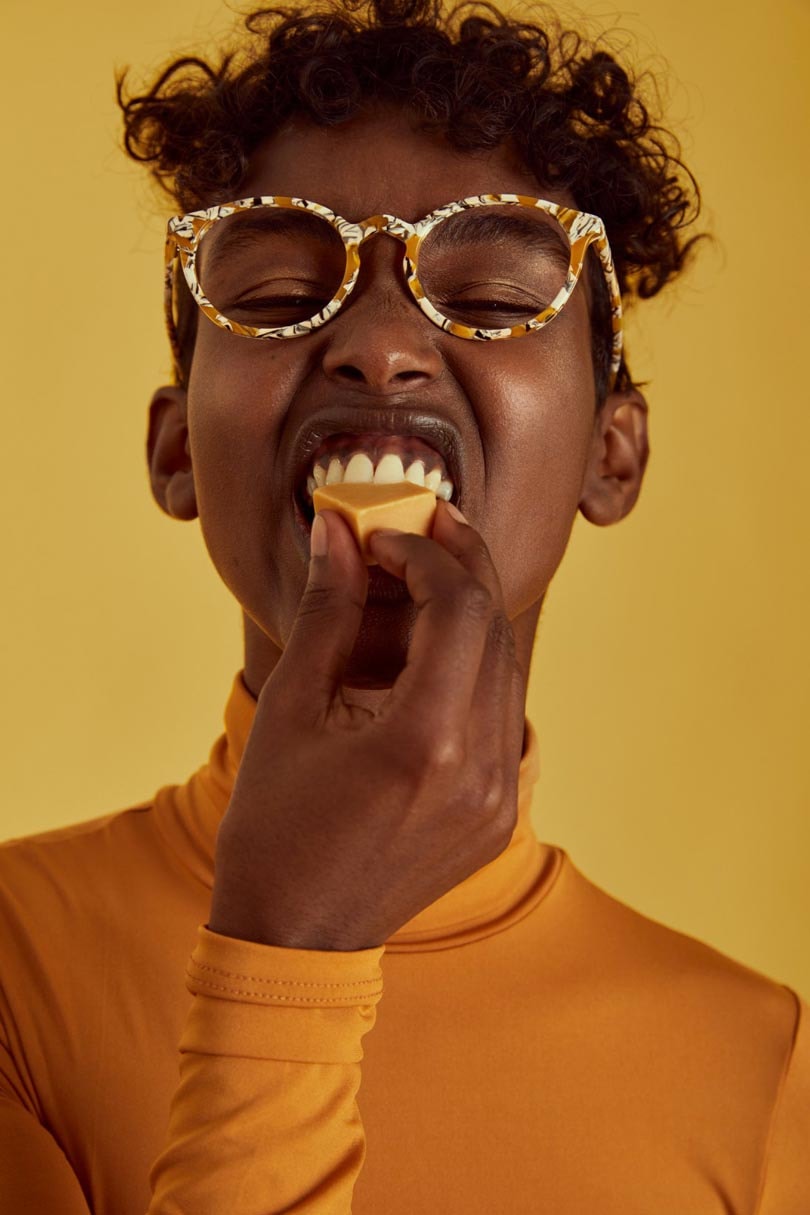 Founded in 2011 by Pauline Cousseau and Pierre Wizman, two French expats who met in China and later moved to Amsterdam, Polette offers fashionable eyewear from 14,99 euros (approximately 17 US dollars). 25 new frame styles are released each week, encouraging customers to change their glasses like they change outfits. “We want to always keep our customers excited, because in this day and age if you don’t renovate yourself as a retailer, you die”, Cousseau told FashionUnited over the phone. To accomplish such a feat, Polette has seven designers working in-house.

The company currently operates six showrooms: three in the Netherlands, one in Belgium and three in France, with plans to open a seventh location in a new country in 2019. “It could be London, Berlin, Barcelona… We’re still looking into it, but I think Polette has great potential everywhere”.

She and her business partner were astonished by the retail price of eyewear when living in China. As that’s where most of the world’s biggest brands manufacture their frames, it’s easy to find affordable high-quality options there. “Then we visited some factories and realized there is no reason for a pair of glasses to cost 500 euros in Europe. If you look at Gucci or Armani frames, Polette’s quality is the same, if not better”, Cousseau guarantees. An online shop aimed at European customers quickly ensued, as Cousseau and Wizman bet Europeans wouldn’t be afraid to buy glasses online if the price tags were reduced. They were right. 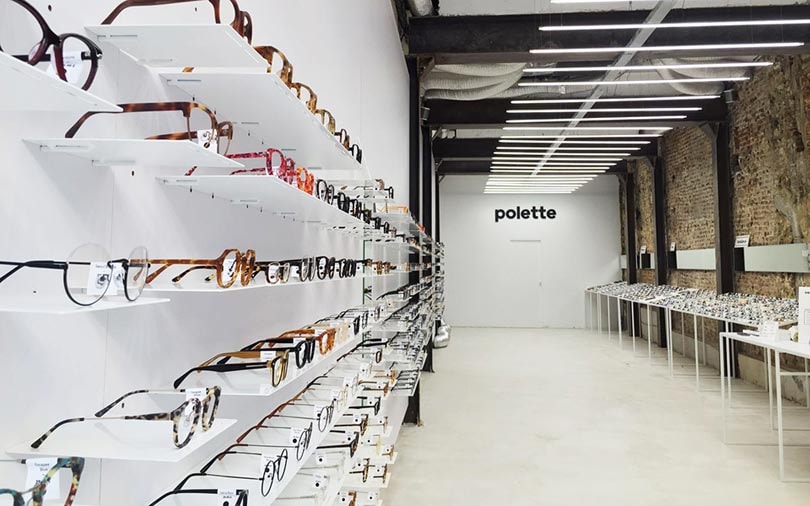 The decision to open showrooms came once the duo moved back to Europe to stay closer to their customers -- and possible investors. “We wanted to offer people a chance to see our products, but we didn’t want to do that in a way that would kill our business model”, she says. “Many ecommerce companies open physical stores in the traditional sense, but that requires a lot of investment in inventory, which is not the core of our business. The core of our business is to offer high quality, fashionable glasses for the lowest possible price, and that simply wouldn’t be possible if we had to keep a lot of stock. We would also never be able to renew our collection as fast as we do now if we didn’t produce on demand”.

Working to Polette’s advantage is the fact consumers are already used to having to wait to get prescription glasses. “Polette is more convenient than traditional stores because we send the product directly to the client’s home”, says Cousseau. Asked whether she thinks the showroom model is the future for all fashion retail, her answer is an enthusiastic yes. “The consumers of today are accused of seeking instant gratification, but I know they can be patient because I belong to that generation myself. We still love shopping at physical stores. But we also love convenience, which is why we shop so much online. I think sending the products directly to the customer’s home is a real asset for a business. The only thing is that shipping should be faster. That’s the only part of the business that we can’t control directly, but I see parcel services are making efforts to improve”. 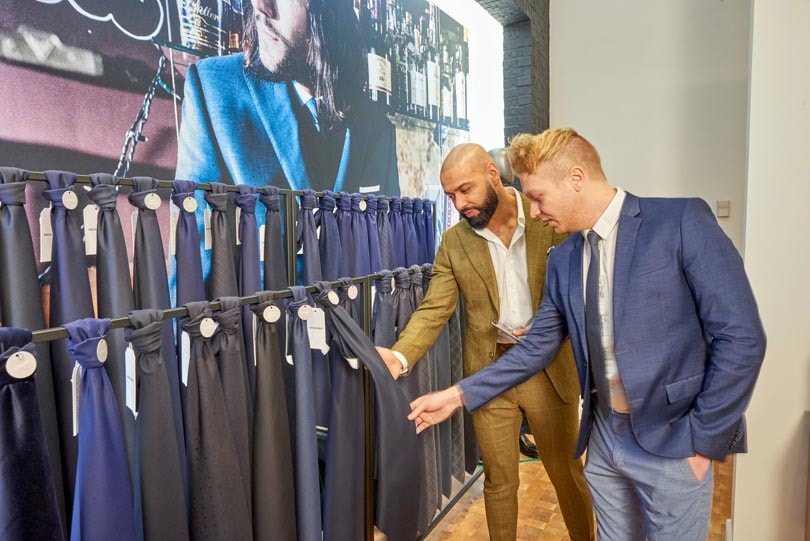 Headquartered in Vancouver with officers in Dalian, China, Indochino was founded in 2007 with the mission to offer custom-tailored suits online. Today, it is the largest made-to-measure apparel company in the world, employing over 600 people.

The first showrooms were opened in 2014. Now, Indochino operates 37 showrooms across North America, with 20 more to come in 2019. The company achieved record success in 2018: its Q4 was the best in the company's history and it expects a 43 percent year-on-year increase in sales in FY 2018. “One of the most interesting parts of our journey is that, while everybody is retracting from retail, we’re going for it full speed”, CEO Drew Green told FashionUnited over the phone.

“We basically took something that’s been around for hundreds of years and made it available for everyone”, Green explains. “Bespoke, made-to-measure clothing used to only be available for the elites”. Customers are allowed to choose from a range of lapel, vent, pocket, lining and button color options, to name but a few of the available customizations. “Each of the 500,000 garments we’ll ship this year are unique”, Green emphasizes.

“If you look at retail in the last twenty years, with the rise of companies such as Amazon, there’s been such a focus on price. What we wanted to do was move away from that model and focus on offering an experience”, the CEO adds. The strategy paid off, as several studies point out Millennials (consumers aged 20-35) value experience over possession, therefore expecting retailers to dazzle them and make them feel unique. “Millennials are used and understand the value of personalization and customization. They’re used to Netflix and Spotify”.

The physical retail network turned out to be an effective tool to achieve customer loyalty. “Data shows us that the customer that interacts with us in-store is 25 percent more likely to shop with us again. They’re more valuable than a pure online customer”.