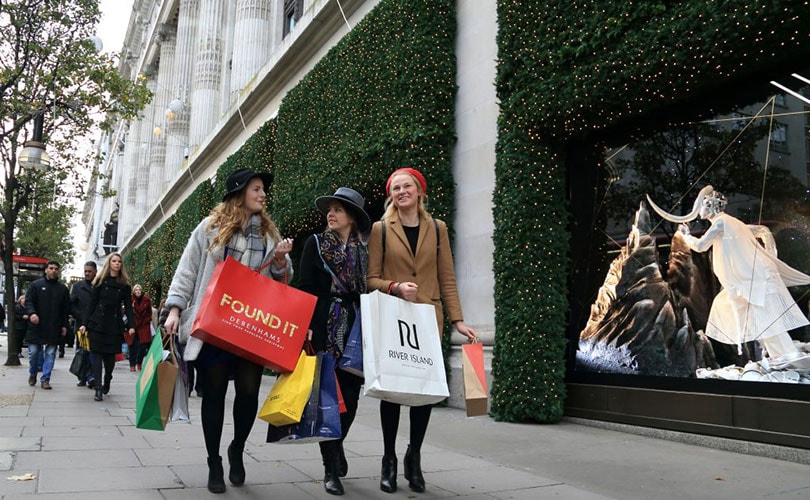 West End shops are forecast to end 2016 with a bumper festive sales run, with the six weeks running up to Christmas expected to see sales rise by 1.6 percent to 2.34 billion pounds.

According to the New West End Company, Christmas sales are set to be boosted by increased spending by international tourists flocking to make the most of the weakened pound post-Brexit. In July, average spend per tourist was 918 pounds and that has increased to 1,155 pounds in September, with visitors from America, China and the Middle East being the biggest spenders.

With the average Christmas spend expected to be up by 65 percent from the rest of the year, with visitors being brought into the West End to see the Christmas lights, which will switch on across Bond, Oxford and Regent Streets with the first traffic-free event on Oxford Street since 2012.

The report also noted that it expects spending by domestic shoppers to be “steady” due to continued caution over Brexit, which will lead to overall footfall in the West End to drop by 3.1 percent from last year’s drop of 2.7 percent.

“However the New Year will ring in numerous challenges for our retail heartland and we will need full support from the Government on critical issues such as business rates to ensure we can continue to strengthen the UK economy as Article 50 is triggered, and we enter two years of uncertainty as negotiations to leave the EU begin.”

From a retailers’ perspective, Debenhams regional sales director, Susan Reid said: “We feel very positive about trading this Christmas. We’ve got a wonderfully atmospheric in-store experience, great exclusive brands and a strong food offering. Based on the thousands queuing up for one of our recent beauty range launches, I would say that consumers are feeling confident and are ready to spend on treats.”

John Lewis’s Oxford Street head of branch Karen Lord, added: “There are mixed messages over consumer confidence but we’ve seen a strong last few weeks in comparison with the same time last year. As a result, we feel really optimistic ahead of the festive period. We’ve invested heavily in our product assortment from fashion, to virtual reality gaming and personalised Santa sacks. Customers are looking for inspiration and differentiation.”