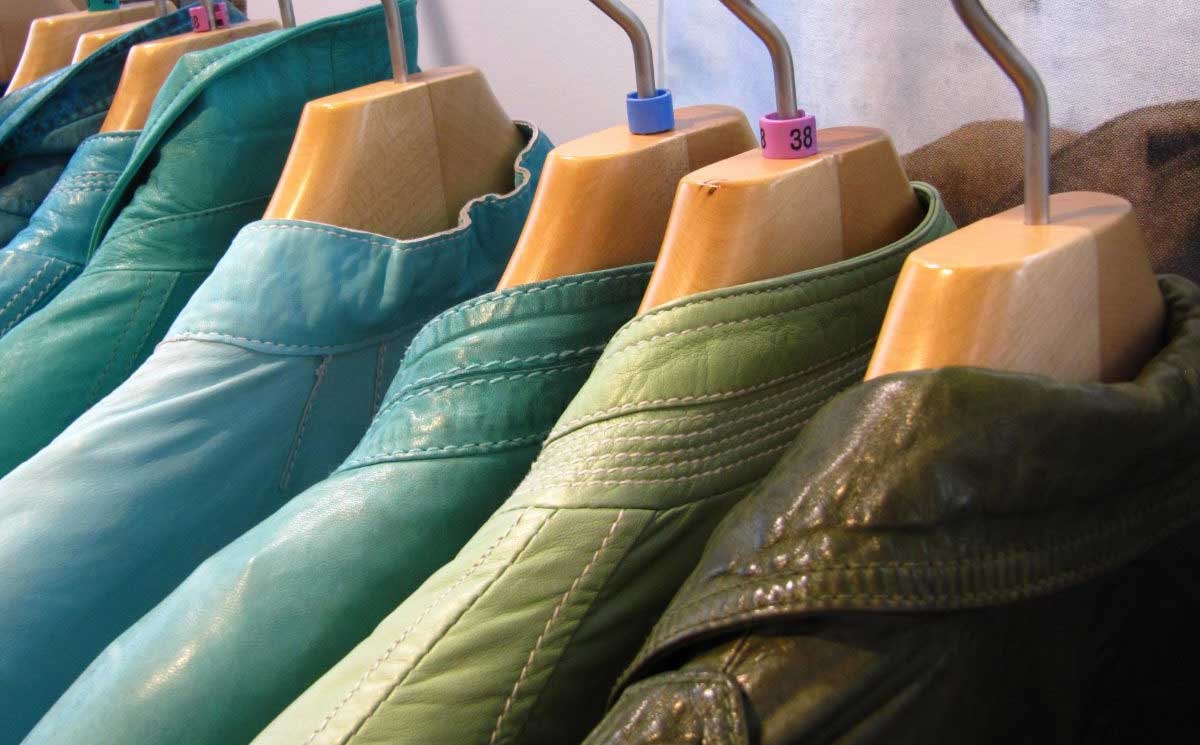 Outlook: EU and US apparel consumption could fall by 300 billion US dollars in 2020

Most European countries and the United States have been in lockdown since mid-March due to the Covid 19 pandemic, and brick and mortar stores have been closed accordingly. Although online retail continues, it is proving difficult due to falling consumer spending, transport issues and disruptions of the supply chain. A forecast by Indian management consulting company Wazir Advisors, which focuses specifically on the apparel sector, predicts a decline in apparel consumption in 2020 of 45 percent in the EU and 40 percent in the US, which could lead to a reduction by 300 billion US dollars (around 274 billion euros or close to 240 British pounds).

Wazir Advisors’ outlook, titled „The Big Fall: EU and the US Apparel Consumption to Reduce by US$ 300 bn. Impact of Covid-19 Scenario on European and the US Apparel Market“ expects the current lockdown situation to continue until mid-July because new coronavirus cases are expected to peak by late April/mid-May. This would imply a total three to four months closure for almost all the brick-and-mortar fashion stores across the US and Europe.

Even if online retail remains the only way to buy clothes for a few months, apparel purchasing will be delayed. The report gives various reasons for this: On the one hand, consumers are currently primarily buying groceries, medicines and other staples. There is no urgency to replenish clothes, especially because the options to go out are limited with schools, offices, restaurants, gyms, etc. still being closed). On the other hand, consumers have limited product options and potentially long delivery times.

US more consumerist than EU

“The US as a society is more consumerist compared to Europe. A younger population with a habit of regular spending will cause the US to maintain a tad higher consumption than the EU during the lockdown period; and more importantly, a faster return to normal consumption levels,” sums up Wazir Advisors.

The report also points out that the European economy has already been under pressure in recent years and that countries such as Italy and Spain, which are the worst affected by the pandemic, will cause lower consumption levels than those in the US in 2020. 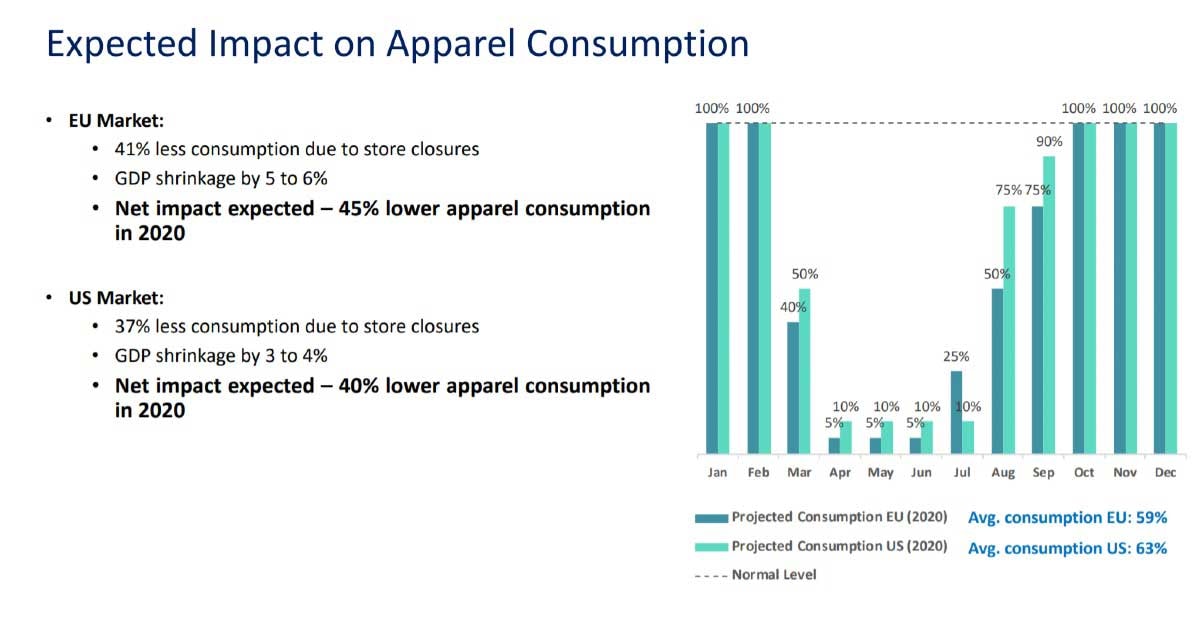 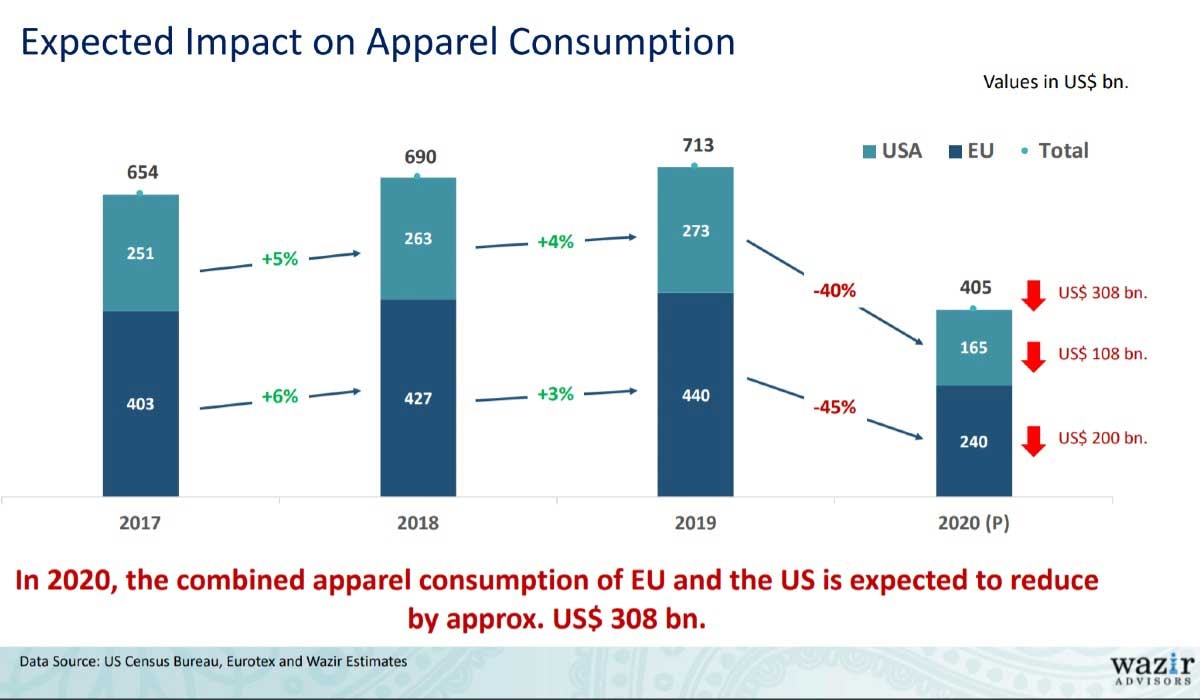 For 2020, the outlook envisions three scenarios: In the first, China could lose a significant market share in the US and EU markets, as well as Spain and Italy within the EU. This could be taken up by Bangladesh and Vietnam for both markets or by Turkey and Poland in the EU.

According to the second scenario, India would be able to increase its share in both markets, especially if Indian exporters start focusing immediately on synthetics like functional, performance and outerwear apparel, and improve their competitiveness in core categories. In the third scenario, China would be able to maintain its share by lowering prices and market shares would remain unchanged.

Wazir Advisors’ recommendations for Indian apparel exporters are also useful for garment producers in other countries. The management consulting firm recommends to focus on one‘s strengths and to expand them (for India this means cotton garments and embroidery) as well as sticking to manufacturing excellence and improving cost competitiveness. On the other hand, garment manufacturers should diversify to stay in the race. For India, this means producing winter wear, outerwear, functional and performance wear.

Whether the forecast proves to be true will depend above all on how long the lockdown lasts in the respective countries, when consumers are willing to spend money again and whether online retailers can fulfil the clothing demand once it arises again.