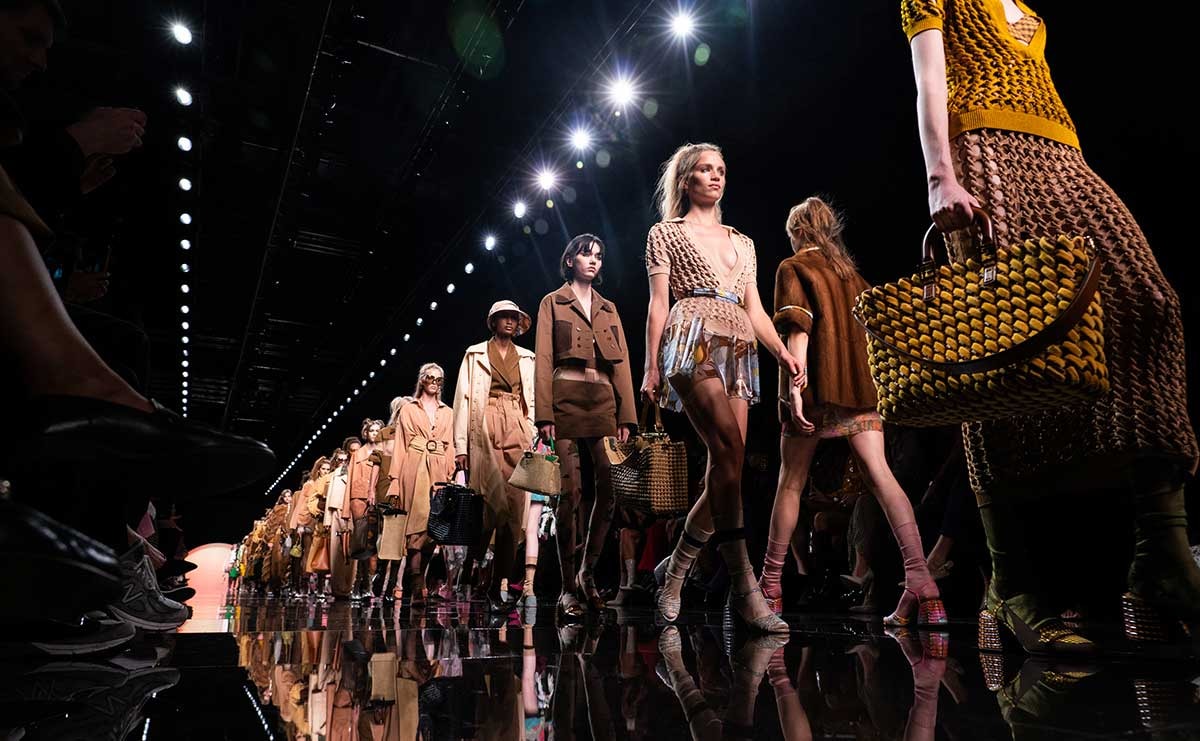 After New York and London, two relatively lacklustre fashion weeks, all eyes were on Milan to deliver a jolt of excitement. It has been a challenging season so far under the black cloud of an uncontainable coronavirus that is widely expected to ricochet the bottom line of brands globally, as the forecast of declining sales in China extends across borders and territories.

On the runway, it’s not all about fashion

Fashion with a capital F may not have been the main dish in Milan, but there was plenty of messaging to divert our attention elsewhere. At Moschino, Jeremy Scott had his cake and wore it too. Models reminiscent of Marie Antoinette wore pastry-inspired gowns, delectably kitsch in macaron colours, topped off with frosting and giant wigs. It was a comment on elitism and excess, “the confectionery cocktail dresses stand as a sly comment on the denseness of certain people in power,” the show notes read. Touché.

At Prada, strength and femininity were centre stage, with a version of Atlas, the Greek God who carries the weight of the world on his shoulders, built into the set of the Fondazione Prada. It drove the point home, reflected in boxy jackets that were belted with pillbox bags and fringing on skirts and dresses. Chunky boots in pastels were poignantly made for walking, worn with puffy leather blazers that exuded an armor of strength.

At Fendi, women’s liberation was a theme, from the boardroom to the bedroom, with no doubt who is charge. From the sumptuous wrapped coat of the opening look to a full-on cognac leather two-piece worn by Gigi Hadid, there was plenty to mean business and what one might like to wear after dark.

The powerhouses weren’t so powerful

After Versace’s internet breaking SS20 collection with Jennifer Lopez closing the show in that infamous jungle-print dress, it would be a moment difficult to top for any brand. Sure, there were flashes of Versace-isms, like a thigh-skimming animal-print dress worn by Gaia Gerber, teamed with a faux fur coat in swirls of brown and yellow and lined with zebra, that delivered the expected levels of octane. But there was also streetwear, and Americana influences (rugby polos from Versace?) and so much daywear perhaps better suited to the erstwhile Versus collection. When a brand presents an intersection of options it confuses its customers which direction to go. Maybe this was a directive from Versace’s American parent company Capri Holdings, who are eyeing expansion and a broader customer base, but this collection lacked an edit.

At Gucci, guests made their way via a staff-like entrance through a back door, walking onto the set with models in hair and makeup, a reversal of audiences one might say. A revolving room revealed stylists making a final tweak to models’ looks and elsewhere the house’s seamstresses and design team were in full view. It made for a mesmerizing, live experience show, but the clothes were less impactful. Less impactful in the sense of familiarity and deja vu with Alessandro Michele’s aesthetic, leaving the burning question how many seasons of geek-chic apparel will remain enticing to shoppers?

Bottega Veneta and Missoni were hits

Kering is already reaping rewards with the appointment of Daniel Lee at Bottega Veneta, and should Gucci’s growth inevitably slow down there is a new multi-billion euro possibility in town. The bags and shoes at Bottega have been reaching new audiences (and selling out) and the ready-to-wear shown on the catwalk felt fresh and covetable, proving Kering has a new It-brand in its portfolio. The house’s woven signature – intrecciato – has been updated and refreshed, like the double-faced leather gilets or soft-as-butter-bags exposing the kind of craftsmanship that spells money without a logo stamped on to justify it. The clothes, too, had plenty of appeal, like a creamy bouclé-knit sweater dress with a woven chain neck, or the way the silhouette of a ribbed dress moved on the wearer, its hems ending in fringes. Even the 70s brown shirt collars worn wide over tailoring were a good look. Prepare to be seduced next season.

When times are tough, we turn to comfy clothes, and Missoni is the go-to brand for chic knitted separates, like geometric belted cardigans, patchwork knits and lurex shirts. There is comfort in the timeless elegance of its intarsias, and the knowledge that the money spent will be for a wardrobe classic. Not every designer needs to reinvent the wheel of fashion each season.

Prada and Raf Simons forge a new future together

Miuccia Prada and Raf Simons, two designers who favour an intellectual and creative approach to fashion, announced a partnership with Simons appointed as co-creative director of the Prada brand. This is new territory when it comes to designers collaborating, extending far beyond the drop of a capsule collection or pairing of brands to sell merchandise. The result will be exploring new possibilities that neither Prada nor Simons could execute on their own, “a propagation of thought and culture, with the product a vehicle for those thoughts.” The first joint collection will be revealed in September.

On the last days of Milan fashion week a lockdown of 50,000 inhabitants in Northern Italy shook the industry. No one is exempt from the COVID-19 virus, certainly not luxury brands. A report by Altagamma, BCG and Berstein predicts the luxury industry could see a decline of 30 to 40 billion euros in sales this year, as stock markets crash and the Chinese skip global fashion weeks, in addition to canceling their own.

Retailers, airports and tourist destinations around the world as varied from Bond Street to the Vatican are feeling the pinch from the homebound Chinese. So far only Giorgio Armani canceled his show in Milan, but buyers are weary shows in Paris may follow suit.