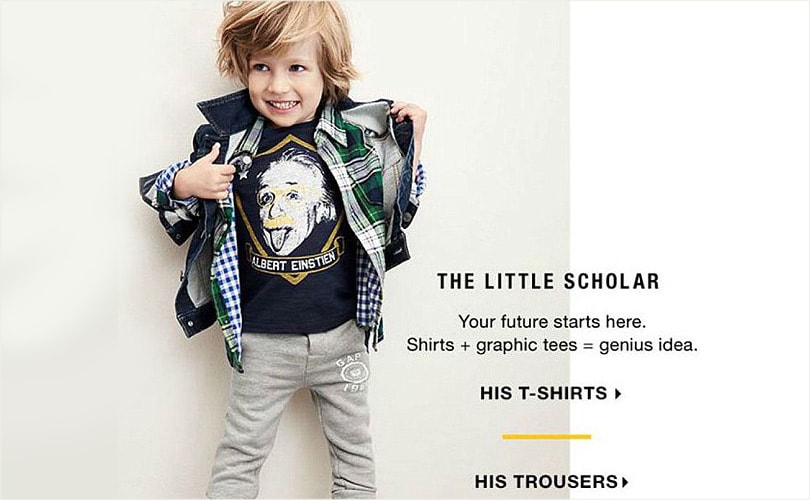 Gap's latest childrenswear advertising campaign, which sees a boy wearing a blue Einstein t-shirt with the slogan "The Little Scholar, your future starts here," and a girl in a pink logo sweater portrayed as "A Social Butterfly, the talk of the playground," seems shocking on several fronts. Firstly how an international retailer could so evidently let its creative and merchandising teams approve such blatantly stereotypical product categories, knowing they would be used for a campaign. And secondly, how these out-of-date descriptions of modern boys and girls seemed worthy of a catchphrase by its agency and superiors to be advertised and sent to its customers.

Gender-biased and sexist marketing practices are polar opposites of what is happening in fashion in the current zeitgeist, with brands such as Vetements and Gucci revolutionising and championing gender fluidity. Perhaps the Gap took a hiatus to planet Mars when last year Bruce Jenner so publicly became Caitlyn, fashion runways saw men in womenswear and vice versa, and the topic of gender neutrality has been as widely discussed from Washington to Warsaw. 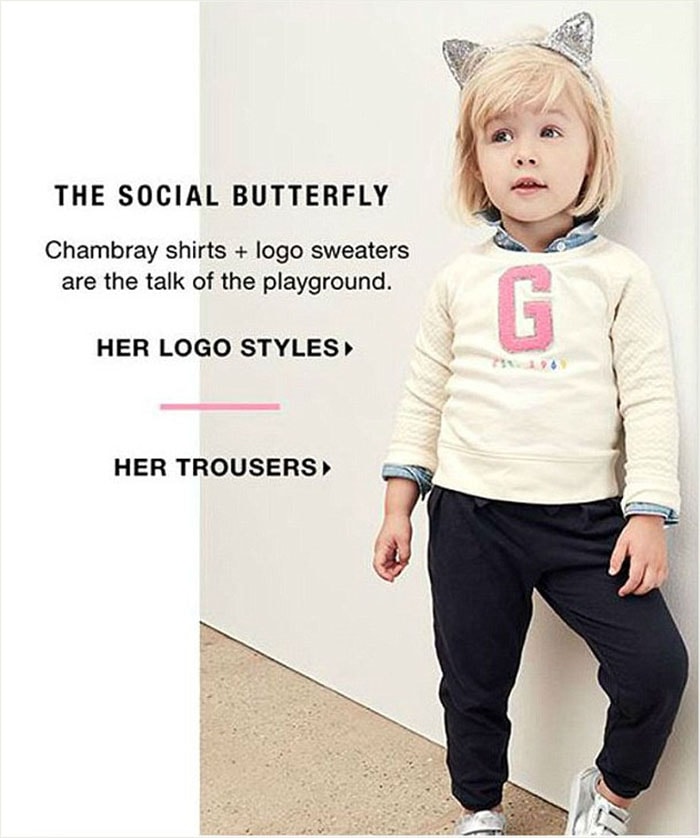 In the digital age where anyone can comment and directly speak to a brand, the backlash on social media showed the general public is not in sync with Gap's biased views on gender. One user with the Twitter handle @LetToysBeToys wrote "For anyone who thinks that sexist marketing to children is not a problem....really @Gap?" The account, a parent-led campaign attempting to reduce gender specific advertising for toys, echoed a sentiment shared with other users. One wrote wrote her daughter "is determined to be a scientist, what kind of message is this?"

The ad campaign was reportedly first sent in an email to U.K. customers but can also be found on the brand’s website. The public outcry has hopefully delivered a sharp message to a global retailer promoting gender stereotypes. As the campaign wasn't advertised on television or print media, the UK advertising body ASA in all likelihood did not see the campaign.

On its website the ASA states: The mocking of women and men in non-stereotypical roles, the reinforcement of stereotyped views of gender roles, and gender-specific marketing to children, as well as concerns regarding objectification, sexualisation and the presentation of an idealised or unrealistic body image are all issues that have gained considerable public interest. As a proactive regulator, we want to find out more about these issues and others to ensure we continue to be alive to and in tune with prevailing standards when interpreting and applying the rules. Consequently, we will be doing three things: examining evidence on gender stereotyping in ads, seeking views from a range of stakeholders, and commissioning our own research into public opinion.

Perhaps the biggest faux pas from Gap was the fact it misspelt the word Einstein on the boy's t-shirt (as Einstien). There's definitely is a lack of scholarly behaviour to be had at this retailer.