Sustainability in the fashion industry is having a moment. Headlines are calling for transparency, a growing demand for circular and ethical fashion is gaining traction and there is momentum, even if they are baby steps, towards a cleaner industry and greener planet.

Sustainability as a subject matter is at last getting the attention it deserves. But if a collective conversation is happening from within the industry itself, the brutal reality of factory workers is a far cry from the words spoken by brands' sustainability officers, who's companies continue to produce garments in factories where human and worker's rights are but a tacit agreement rarely enforced.

A report released this month on workers rights in Bangladesh revealed the government and apparel factory owners are retaliating against workers who are campaigning for a higher minimum wage, which was raised to 95 dollars a month in December 2018, from an hourly wage of approximately 0.45 cents and 22 dollars per week. 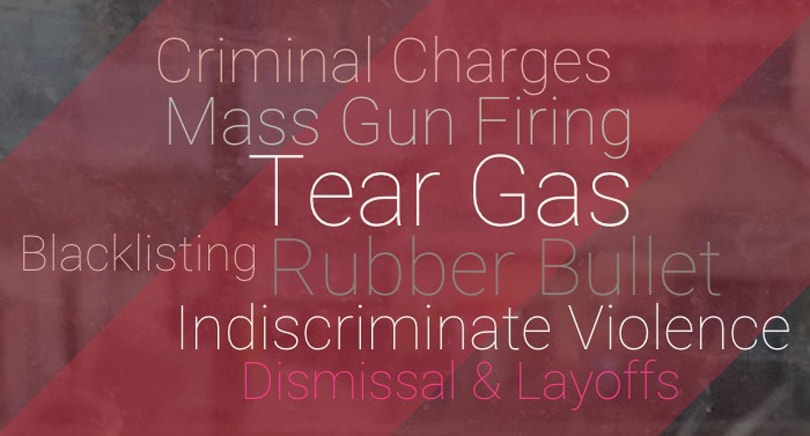 Since campaigning for higher wages last year, many workers have been arrested and subjected to baseless criminal charges, "brought at the behest of factories that supply brands like H&M, Mango, and Next. Factories producing for these and other brands have fired as many as 11,600 workers without legal justification, most of whom are unable to find other jobs due to systematic blacklisting. Some factories have even hired thugs to physically assault employees."

The report, which was published by the Workers Rights Consortium (WRC), eerily notes freedom of expression and association have become increasingly stifled by Bangladesh’s Government in recent years. The Government, led by the Awami League, has most notably used the Information and Communication Technology (ICT) Act to arrest scores of civil society actors for criticising governmental and political leaders, among others, in online newspapers, on Facebook, and on other social media sites.

The response by government security forces was characterised by indiscriminate use of physical force, in contravention of workers’ rights of speech, assembly, and association as well as arrests of, and criminal charges against, 65 workers were driven by demonstrably baseless complaints from managers of 30 factories, producing for a long list of well-known brands and retailers. The report iterates some workers were charged based on alleged acts that took place miles away from their actual workplaces and in which the workers cannot possibly have taken part.

Despite a focus on factory safety in Bangladesh following the Rana Plaza disaster, workers rights have a long way to go. Factory owners were never held meaningfully accountable for their role in the unlawful repression of peaceful protest and assembly. Western brands and retailers continued to pour business into Bangladesh; exports to the US, for example, have grown 19 percent in the last year.

How can brands remedy the harm done to workers?

The WRC asks all brands sourcing from Bangladesh to require all of their suppliers to withdraw any criminal complaints they have filed in relation to the recent protests (as well as any remaining criminal complaints against workers; reinstate and provide back wages to all workers terminated or forced to resign in the wake of the protests; and commit to a nondiscriminatory hiring process, designed to end the blacklisting of workers based in their involvement in the protests.

Based in Washington, USA, the WRC conducts independent, in-depth investigations, issues public reports on factories producing for major brands; and aids workers at these factories in their efforts to end labor abuses and defend their workplace rights.