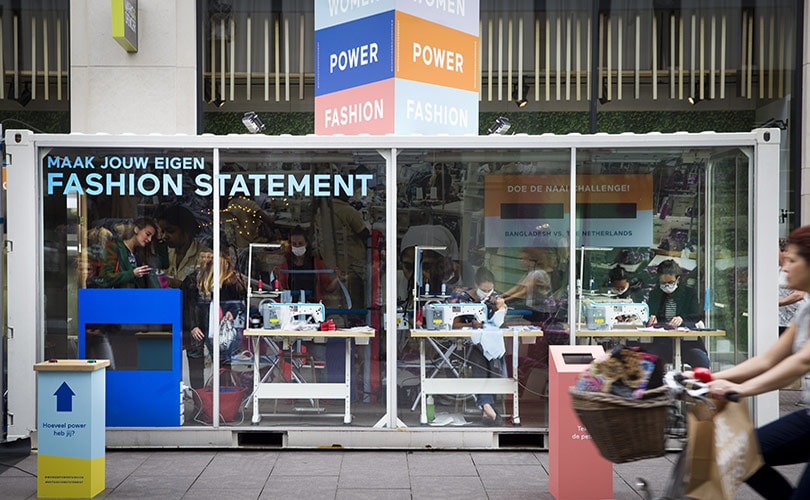 Pop-up Sweatshop urges the Fashion Industry to be more Transparent

Amsterdam - It almost seems unfathomable that a global industry which generated 1.5 trillion euros in revenues last year does not pay a living wage to all its workers. Yet this is the reality for a large majority of the 60 million people employed in the fashion industry supply chain. In countries like Bangladesh, India, and Cambodia, millions of female garments workers are forced to work overtime hours in unsafe working conditions in exchange for the national minimum wage - wage which does not even cover all of their basic needs such as rent, food, and electricity. A recent report entitled ‘Fashion Focus: the Fundamental Right to a Living Wage’ from NGO The Circle examined the highly profitable fashion sector through a legal view and concluded that a living wage is a fundamental human right which all states are obliged to guarantee. So why are millions of workers still submitted to such unfair treatment?

In order to raise public and sectoral awareness concerning the plight of female garment workers in the fashion industry the Women Power Fashion, a joint initiative of non-profit organisations Clean Clothes Campaign and Mama Cash, is inviting consumers to step into their ‘sweatshop’ for a first-hand experience of what daily life is like for these women. “The concept is similar to the ‘sweatshop’ store we ran in the Kalverstraat last year,” explained Tara Scally, Campaign Coordinator for the Dutch branch of the Clean Clothes Campaign to FashionUnited. “We had such a great public response to the pop-up sweatshop in Amsterdam, so we wanted to something in the same vein but also new.” Instead of just showing consumers what conditions are like in a garment sweatshop in India or Bangladesh, the new pop-up installation lets the public experience them first hand by sitting behind a sewing machine and making as many garments - in this case, ties - they can within an hour. 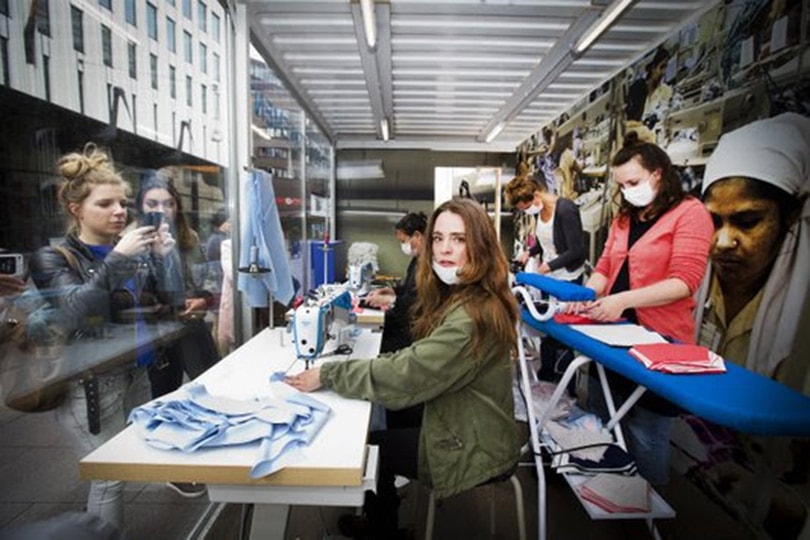 “The numbers on the wall simulate the targets workers in Bangladesh, for example, are expected to reach,” continued Scally. “Some workers have to make up to 100 pieces in one hour and when you sit behind the sewing machine here and you try to do it yourself you realize how hard it is to achieve those targets.” The pop-up sweatshop, which opened its doors on May 16, is open to anyone who wants to experience what it is like working in a sweatshop and a number of local celebrities and politicians have already taken their turn behind the sewing machine to raise awareness and ask brands to become more transparent. “We’ve already had a lot of public interest - which is part of the reason why the sweatshop is so open, so anyone can stop by and have a look.” Outside of the transformed sea-container shoppers can also digitally have their say on working conditions in sweatshops and decide whether or not workers are allowed bathroom breaks, safe working conditions, and fair pay. “It might sound strange to most people, but in reality, these are the conditions faced by female garment workers. These are questions aimed at informing consumers.”

Shoppers can also sign a petition outside of the pop-up sweatshop which asks fashion brands to become more transparent about where they are producing their products and under what conditions. “Transparency is exactly what we are aiming for - that way trade unions and NGOs can really do their work and brands will know who exactly they are working with and if things go wrong who is accountable. Then consumers will also be able to make an informed choice because no one wants to be a part of this exploitation in the fashion industry.” Increasing consumer awareness and encouraging them to buy more consciously while asking fashion brands about the working circumstances their products are made are also key areas of the Women Power Fashion campaign. “It’s a good initiative aimed at raising consumer awareness because consumers have the power,” said Zehra Khan, feminist activist and founder of the Pakistani trade union ‘Home Based Women Workers Federation to FashionUnited. “They are the one who can really make a change and pressure fashion brands to implement laws concerning workers rights. Consumers here in Europe are definitely more aware of these human rights issues than those in Pakistan.” 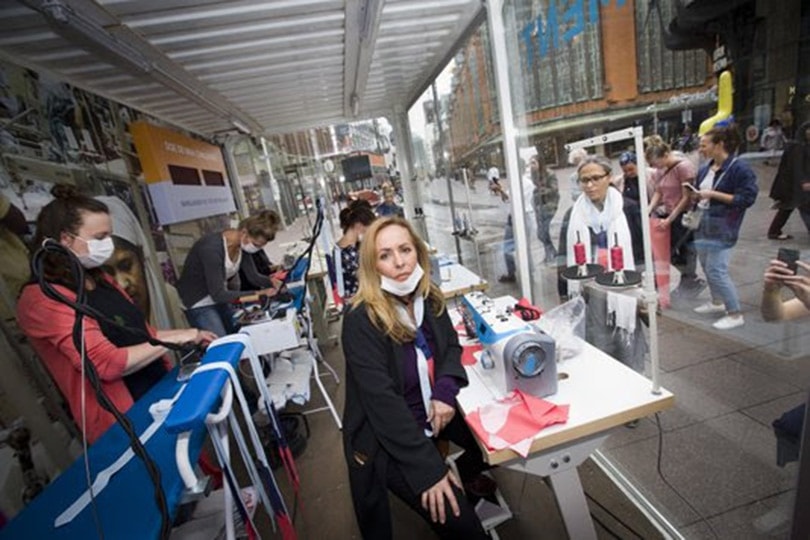 A number of larger fashion retailers, such as H&M, Kering and C&A, have committed to become more transparent and to share their supplier lists with the public in the future, which is a good step added, Khan. “But is just a little step forward. I think brands should be much more open and share their full product supply list, from the farmers they buy cotton from to the factories they work with. Brands should also consider labor rights and regulations before agreeing to have their goods made in a certain country and bring in stronger monitoring systems to ensure these rules are upheld.” Khan also believes that brands should be held responsible for working conditions throughout their entire supply chains, even though they do not directly own factories or productions hubs where their products are made because they are the ones who benefited the most from the profits.

“I really hope these types of initiatives will help bring change and that workers will be paid a living wage. I think it’s good that people are fighting for change and exposing the ugly side many international fashion brands have, whose hands and bank accounts are soaked with the blood workers who are exploited and just working for their profit.” However, in order to bring around systematic change, she believes collaboration is key. “NGOs, trade unions, governments, and brands all need to work together to make a change. They need to think together on how to better the situation. Even if they only increase all garment workers salaries by one dollar it will make a huge difference. Retailers profits won’t change, but the lives of the workers will change. They need to think on this level.”

The Women Power Fashion pop-up sweatshop on the Grote Marktstraat , the Hague is set to run from May 16 to May 21, 2017.