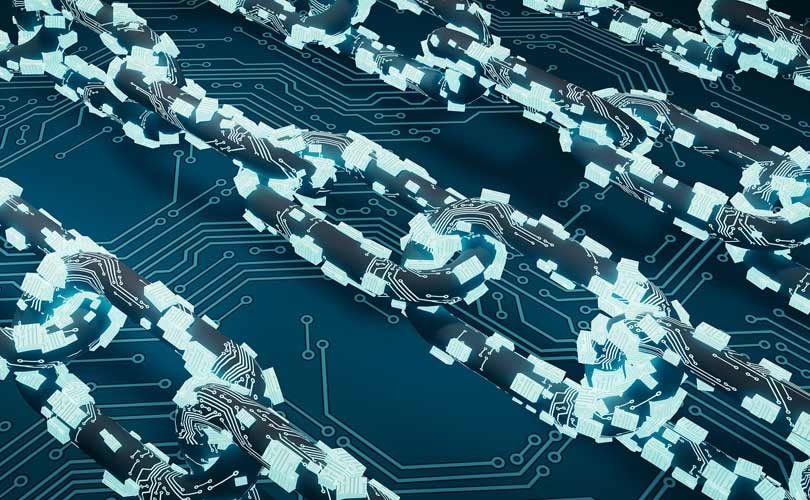 Thoughts about... Blockchain & the Supply Chain

By Ann Marie Newton on behalf of QHQ

The simplest explanation about Blockchain that I have heard is that it is an online ledger: “blockchain is an open, distributed ledger that can record transactions between two parties efficiently and in a verifiable and permanent way”. Some of the key elements of Blockchain as explained by Iansiti and Lakhani in a Harvard Business Review piece are:

You may have heard about Bitcoin, Ethereum or other crypto currencies, which all utilise Blockchain technology. However, there is far more potential to Blockchain than currency alone. One of the most appealing benefits is Blockchain’s ability to be used for transparency.

Transparency is becoming increasingly important for retailers; more and more people want to know how and where goods are made. This trend very much in place in the food sector, with schemes such as from ‘Farm to Table’ is becoming increasingly important in Fashion & Textiles. This goes hand in hand with ethics and sustainability. For retailers to understand if they are operating in the most sustainable way, if the products they buy are made in the factory they believe it to be, they need to know information about the supply chain. Blockchain can help with this type of data tracking. When transactions occur along the supply chain, a digital record can occur at each step.

This type of transparency and supply chain data has proved to be elusive in the past, especially in the world of Fast Fashion. Fabrics and trims can be quickly selected by a manufacturer or buyer to sell a new idea, often without knowing the full supply chain, and in reality, one that they probably won’t utilise again, the viewpoint is single focused on one order, at a price, that can be delivered quickly. The priority here is to make an on-trend garment at a great price. There is no thought for a long-term relationship, what the impact of the raw materials are, where it came from or how it is made. Although consumers can enjoy the benefit of this flexible and fast production method for producing the latest trend item, at an affordable price, what they don’t see is all the repercussions of this way of working. Repercussions which it would not be a long stretch to link to some of our current large-scale societal problems such as climate change, plastic pollution and poverty. Part of the changing landscape that manufacturers and retailers are having to deal with is that more and more people are starting to ask questions about how something is made, and that is becoming more important to more people.

So perhaps Blockchain as a ‘new’ technology can help with the Transparency piece of our Fashion & Textiles jigsaw, however, it is important to consider the environmental impact of Blockchain so that the benefit versus impact can be assessed.

Blockchain relies on energy input and also creates energy output, in terms of heat generated by servers on a large scale. Some of these server hubs are now being built in cold climates such as Iceland to reduce the need for electric cooling, and also take advantage of low-cost renewable energy input from geo-thermal and hydro sources. For Blockchain users,the more that is considered about the whole process, and system the better, so that we aren’t just replacing one unknown with another.

Last April in London I attended a Blockchain Expo at Olympia, this was an event taking place over two days. There were over 200 speakers, panel events, rows and rows of booths and a ton of people! What stood out to me was that presence of some big players in the room, such as IBM, Coca Cola, Lloyds, and a lot of smaller Tech companies I have never heard of. Also interesting was the variety of services and products being discussed: supply chain tracking, crypto currency, security, financial trading, app development, insurance…the list goes on. This gives a flavour of the opportunity that Blockchain provides, its versatile and has many applications, so whether you have heard of Blockchain or not, I bet you will soon enough!

Forbes: "Altering The Apparel Industry: How The Blockchain Is Changing Fashion"