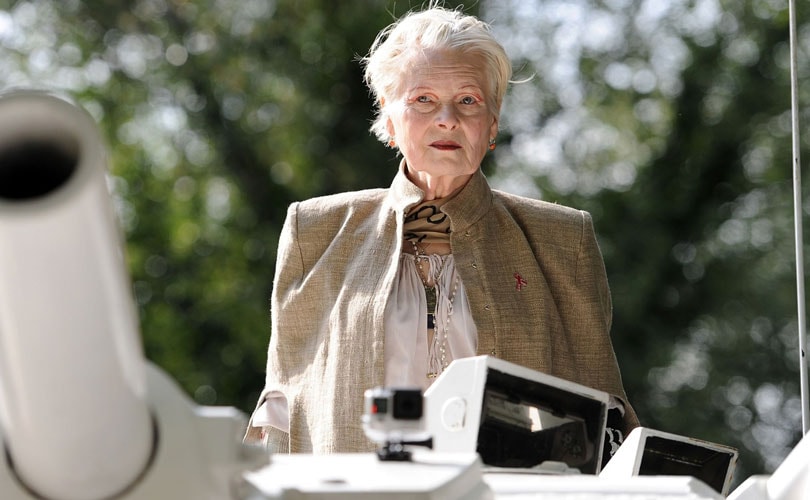 London - The queen of Punk, better known as Dame Vivienne Westwood, would never just stage a fashion show just for fashion's sake, as was evident at her SS16 LFW presentation on Sunday.

These days Dame Viv, as she is affectionately called, is focussed as much on global causes as she is on each season's new collection. She is notorious for her political and anti-establishment views and just a fortnight ago rode a tank to Prime Minister David Cameron’s house to let him know what she thinks about his fracking plans.

On Sunday show the designer’s politics came to the fore once again when a ‘Fash Mob’ of models with black face paint smudged across their eyes stormed the catwalk wearing paper crowns on their heads and brandishing placards emblazoned with slogans such as “Fracking Is A Crime,” “Politicians Are Criminals,” “Climate Revolution,” and “Austerity Is A Crime.”

Coincidentally Westwood is the subject of a major interview in the Guardian published on Monday, where she talks about climate change and supporting a new documentary about Green Peace. About Sunday's fashion shows, she said "I’ve called it Mirror the World. What I mean by that is that you have to understand the world you live in, and you should be a little splinter that mirrors the world. Today you have to understand politics, you have to understand what’s going on as well."