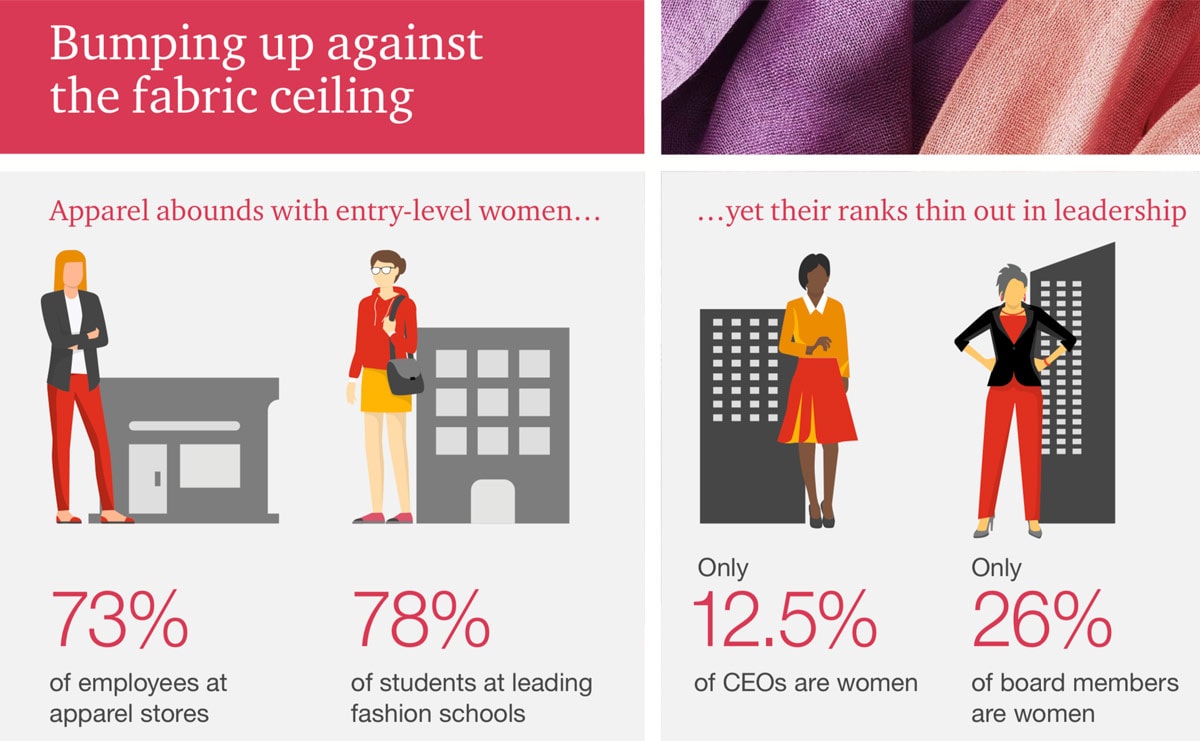 Earlier this year a study by Price Waterhouse Coopers (PwC) tracking female leadership in the fashion industry revealed only 12.5 percent of apparel and retail apparel companies in the Fortune 1000 are led by women. In a report called Unraveling the Fabric Ceiling, it called out how women are the majority when it comes to working in lower level jobs, middle management and studying fashion, but never in the C-suite.

The findings echo a report called The Glass Runway, conducted by Glamour magazine in partnership with the Council of Fashion Designers of America and consulting firm McKinsey & Company. In their findings, women in fashion made it to middle management but then "hit a wall."

The study surveyed 535 people in the industry about their “ambitions, opportunities, and setbacks,” and found women were no less ambitious coming into the industry. The barriers, it appeared, is that men at every level reported getting more regular feedback about how to advance their careers, but not women. At junior levels, men were slightly more likely than women to get promoted without asking. At senior levels, the gap grew to 18 percent of men saying they’d gotten a promotion without asking, versus just 5 percent of women.

80 percent of fashion purchasing decisions are made by women

When women are making the majority of fashion purchasing decisions, estimated to be at 80 percent by PwC, their under representation as fashion leaders appears to be a critical management issue for the bottom line.

Much evidence supports that female-led companies are more profitable, innovative and socially responsible. According to PwC's findings, apparel companies in the top 1000 with female chief executives are almost twice as profitable as companies with male CEOs.

If you don’t have gender balance on your leadership team and on your board, that’s a risk to your bottom line, to your ability to grow, to maintain and attract talent.

If women and men are to be seen as equals in higher management, it must be reflect in their responsibilities and matching salaries. In April of this year, the BBC released data concerning the gender pay gap, stating three-quarters of firms pay men more than they pay women on average. The average pay gap reported was 9.6 percent, meaning that for every 1 pound the average man earns, the average woman takes home 90p. This means the gap has barely moved from last year, when it was 9.7 percent.

The pay gap highlights the issue of gender inequality and the struggle for women to be seen as equal leaders. Change doesn't happen overnight but publicising the numbers will hold businesses accountable.