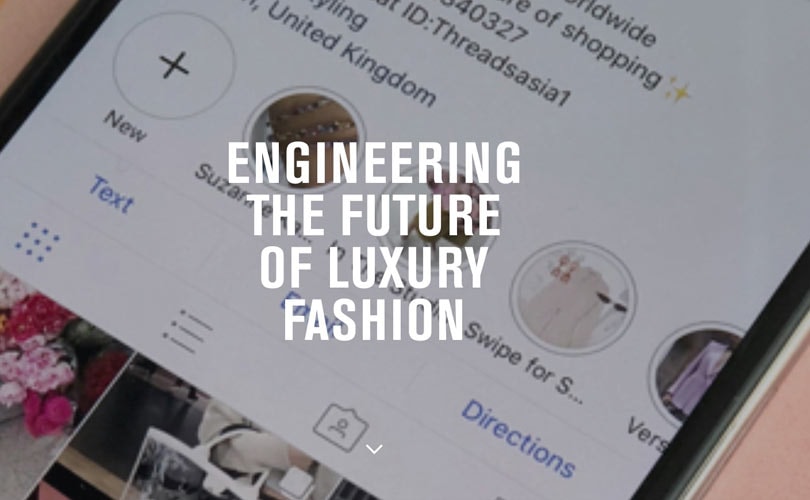 In 2018 the traditional brick and mortar store is but one of many options for shoppers to see and acquire designer fashion collections.

Many will regard 2017 as apocalyptic for the retail industry, with heavyweight brands and retailers like True Religion and BCBG MaxAzria filing for bankruptcy and others downsizing their store portfolio’s.

But despite the doom and gloom of the physical store, e-commerce is thriving and social commerce is an exciting new platform for brands to reach a new untapped demographic of customers.

Last month Threads, a company that brands itself as a 21st century personal shopping platform, raised 20 million dollars in its first round of funding. It’s technology is chatting: servicing clients via social media and personal messaging. There is no web store or online collection, no warehouse, no stock. Instead the company connects high spending clients on WeChat and Whatsapp to its stylists and revenues are based on the commission on each sale. And uses its social channels, primarily Instagram stories, to show products and looks.

“Whatever you’re looking for, from fine jewellery and bespoke couture to the latest streetwear, our expert team of personal stylists will track it down and send it to you anywhere in the world,” the company states on its website.

Social platforms are the new storefronts

According to TrendWatching, a company that helps businesses harness new innovation opportunities, social channels are the new storefronts.

Their research shows in 2017 there were 1.8 billion messaging app users, and the time spent in those apps is forecast to double between 2015 and 2019. They also iterate customers demand friction-free retail experiences, something that shoppers expect both in-store, online and in messaging apps.

“We’ve written at length that the Future of Customer Experience lies either in relentlessly saving customers’ attention, or aggressively seizing it. As such, m-commerce won’t be about more apps, but about leveraging existing mobile ecosystems to create seamless and ultra-convenient customer experiences. Just witness the success of WeChat’s mini-programs, now seeing over 170 million daily users,” the company said in an email.

According to the Telegraph, Threads sells to a demographic of which 70 percent is under 35 with an average spend of 3000 dollars.

Threads founder Sophie Hill told the Telegraph: “We have been offered funding from lots of places but we only wanted to take the money that we needed to prove the concept. We believed in what we were building but we wanted to take as little money as possible to get through all those initial stages."

According to BI Intelligence, the top 500 retailers earned an estimated 6.5 billion dollars in 2017 from social shopping, up 24 percent from 2016.

“Shoppers no longer rely solely on department stores or search engines. Today’s retail landscape is increasingly social, and brands who can master social commerce will rise above the rest,” writes Digital Commerce 360, an online platform that publishes industry news about digital commerce.

While for many social commerce is a relatively new concept, the days of being inspired by a product on Instagram, then having to go to a search engine to find it on an e-commerce site, is no longer considered convenient, especially by millenials.

With the world’s population spending more and more time on social media, it makes good business sense to allow people to connect, be inspired, and ultimately make purchases with a simple click. If you can ‘like’ a bag on Instagram, shouldn’t you be able to buy it?