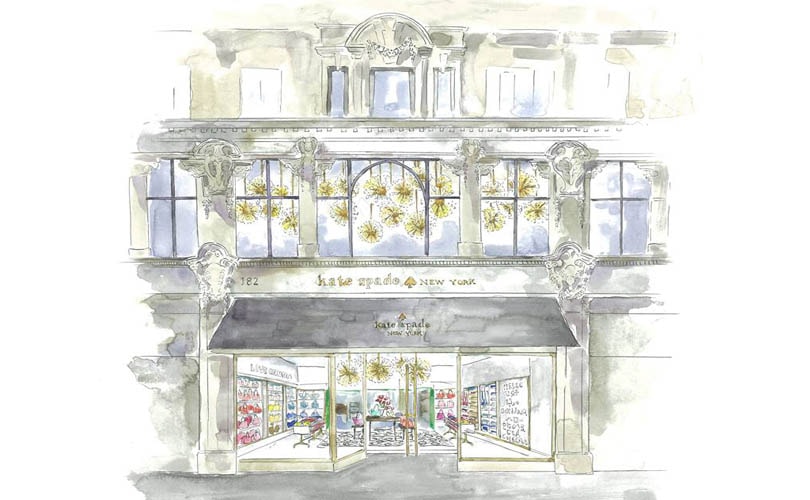 London - US fashion label Kate Spade has opened its largest UK store on London's Regent Street as the brand continues to "capitalise" on its global appeal.

The new store, which measures 4,000 square feet, is located at 178-182 Regent Street and spans two floors, offering the brand's full product assortment, ranging from homeware to handbags to children's wear. Unlike the other locations within London, the Regent Street store was created in order to offer customers a full in-store and brand experience.

"This is really taking it to the next level, with a larger footprint and a broader assortment in the store," said Craig Leavitt, the company's CEO in an interview with WWD. "It’s really an opportunity for our girl to see the world of Kate Spade New York under one roof." He added that the additional pull Regent Street holds for both UK visitors as well as overseas tourist makes it a key location to boost brand exposure.

a little pre-brunch perusing of the latest arrivals. who else is up for some sunday shopping? see more on snapchat: @katespadeny.

"That’s why we’re so excited, we’re going to have a lot more exposure to the customer who’s looking for us, and who maybe knows our brand. This is an opportunity to shop it in London while she’s traveling, particularly that consumer who is from Continental Europe, where we’re just beginning our expansion."

The new store is decorated with the brand's own furniture and features Kate Spade's signature touches as well as local influences, such as little black cads and red double-decker buses which grace store shelves. The Regent Street opening is part of Kate Spade's international foray, which saw the brand open in eight new markets last year including Latin America. Kate Spade is also understood to be looking to open a store in France as well as other countries.

In honour of the new store's opening, Kate Spade is offering an exclusive tote in-store which read "Hello, London" and will launch additional products close to the story's official launch on April 21.