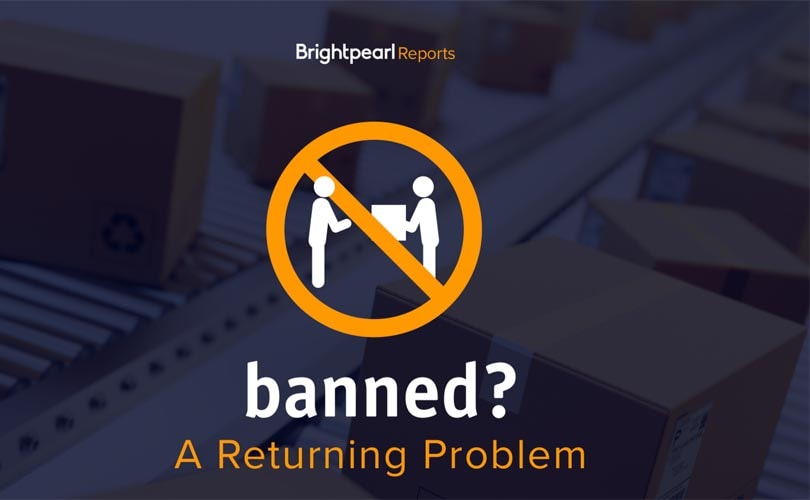 Online shopping has resulted in a barrage of returned items for retailers, with many seeing as much as 30 percent of their orders returned. For fashion customers, buying multiple items of a style is often a practical necessity, not having to return it and placing a second order if the first doesn't fit. Even today, the majority of online stores don't offer the possibility of exchanges.

I, too, have been guilty of ordering multiples of an item, especially from brands with known sizing issues. For retailers, however, the problem lies in how they can mitigate the costs incurred as a result of the persistent serial returners.

Retailers appear to be fed up, with 45 percent of stores planning to ban ‘serial returners’ – categorised as shoppers who deliberately and regularly buy multiple items with the intent to return some.

The findings come from Brightpearl, a resource planning platform, who conducted a survey among 4,000 adults who shop online in the UK and the US, in combination with the views of 200 UK and US retail decision makers. It found that over a third of UK retailers have seen an uplift in serial returners over the last 12 months.

Brightpearl's research showed that returns cost approximately 60 billion pounds in the UK yearly, 20 billion pounds of which is generated by items bought over the internet.

In May, the Wall Street Journal reported Amazon had been closing users' accounts if they made too many returns, sometimes without warning or explanation. By closing these accounts, the online behemoth is trying to protect the 'Amazon experience' for all shoppers and prevent long-term abuse of its return policy.

Of the brands Brightpearl spoke to, more than half (55 per cent) of all clothing and fashion retailers are set to implement similar measures to Amazon, while 67 per cent of consumer electronic firms plan to do the same. Perhaps more surprisingly, baby and toddler retailers are the most ruthless market segment, with three quarters expected to ban serial returners in the near future.

The worst offenders were found to be shoppers aged 18-34, where over a third of respondents confess to having intentionally bought more items than they intended to keep. The research revealed that most shoppers are broadly in favour of bans for serial returners, with 56 per cent agreeing it’s a fair policy. However, there are clear differences in attitudes depending on age groups, with 18-24s much more likely to be unconvinced.

Saving time and administration resources is cited as the biggest advantage of imposing lifetime bans on serial returners, with one-third of UK retailers and almost half of US retailers agreeing. 18 percent in the UK believe a serial returner ban would lead to a reduction in return rates overall, compared to 21 percent in the US. Ensuring a positive customer experience for all customers comes in fourth position in both the UK and US at 18 percent.

Overall, just seven per cent of respondents disagreed about banning serial returners, whilst one in ten said they would never shop with an online retailer which imposed bans for returning too many items.

“In today’s consumer-led retail environment, intentional returning could spell disaster for retail business owners if they do not have visibility over regularly returning customers,” commented Brightpearl chief executive Derek O’Carroll. “Without this, retailers will struggle with the definition and consistent application of their returns strategies – and could face a resulting backlash from shoppers.”

Garment Quarter, a designer clothing brand, has done just that, to offset issues with problem returners. Managing director John Reid said: “We introduced technology earlier this year that enables us to build a single source of information around customer returns, including the ability to monitor serial returners to see how the trend develops over time and whether we need to review our returns strategy.”

There is an extremely fine balance between protecting customers’ overall experiences and implementing policies in a fair and transparent manner. Retailers will need to focus on how they deliver the message to shoppers about their policies in order to ensure that pursuit of operational efficiency does not damage the brand reputation.