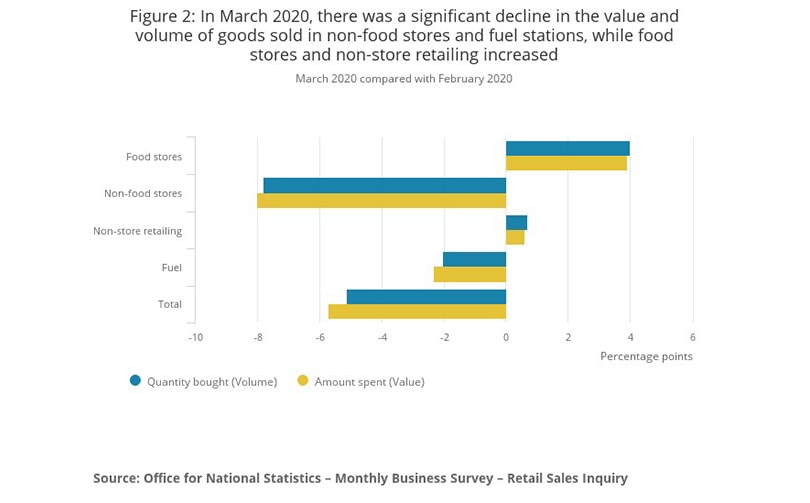 Sales of clothing down -34 percent as retail output shrinks

Sales of clothing fell 34 percent in march, as the retail industry saw its gross domestic product (GDP) drop by 5.1 percent in the first quarter of 2020, the largest fall since retail sales records began in January 1996.

The UK’s economy shrank by 2 percent, a direct result of the Covid-19 pandemic.

The figures come from new data from the Office for National Statistics (ONS), which said the slump occurred within a single month. During the global financial crisis, from the peak in February 2008 to the lowest point of March 2009, a total of 13 months, GDP contracted 6.9 percent.

There was an increase in consumer demand for some goods, mainly because of the effects of retail “panic buying”, which led to growth in a small number of manufacturing industries. Paul Martin, UK head of retail at KPMG, said: “Aside from ‘essential’ retailers still operating physically, consumers have had little alternative but to log-on, and online sales were up nearly 60 percent.

The fashion industry is facing an existential crisis, where clothing sales fell 34 percent in March. The impact on every level has been disastrous: manufacturing has halted, supply chains disrupted, retailers have closed and consumer demand has plummeted.

In its report, the ONS cites output in wholesale and retail trade fell by 3 percent in the first quarter, as many of these services were impacted by voluntary and involuntary social distancing.

The decline in household consumption in the first quarter of the year was driven by falls in spending on clothing and footwear, in line with expectations of the effects of social distancing that was put in place in March.

The latest official retail sales figures point to lower spending on clothing, continuing in the second quarter, as consumers focus their spending on essential purchases.